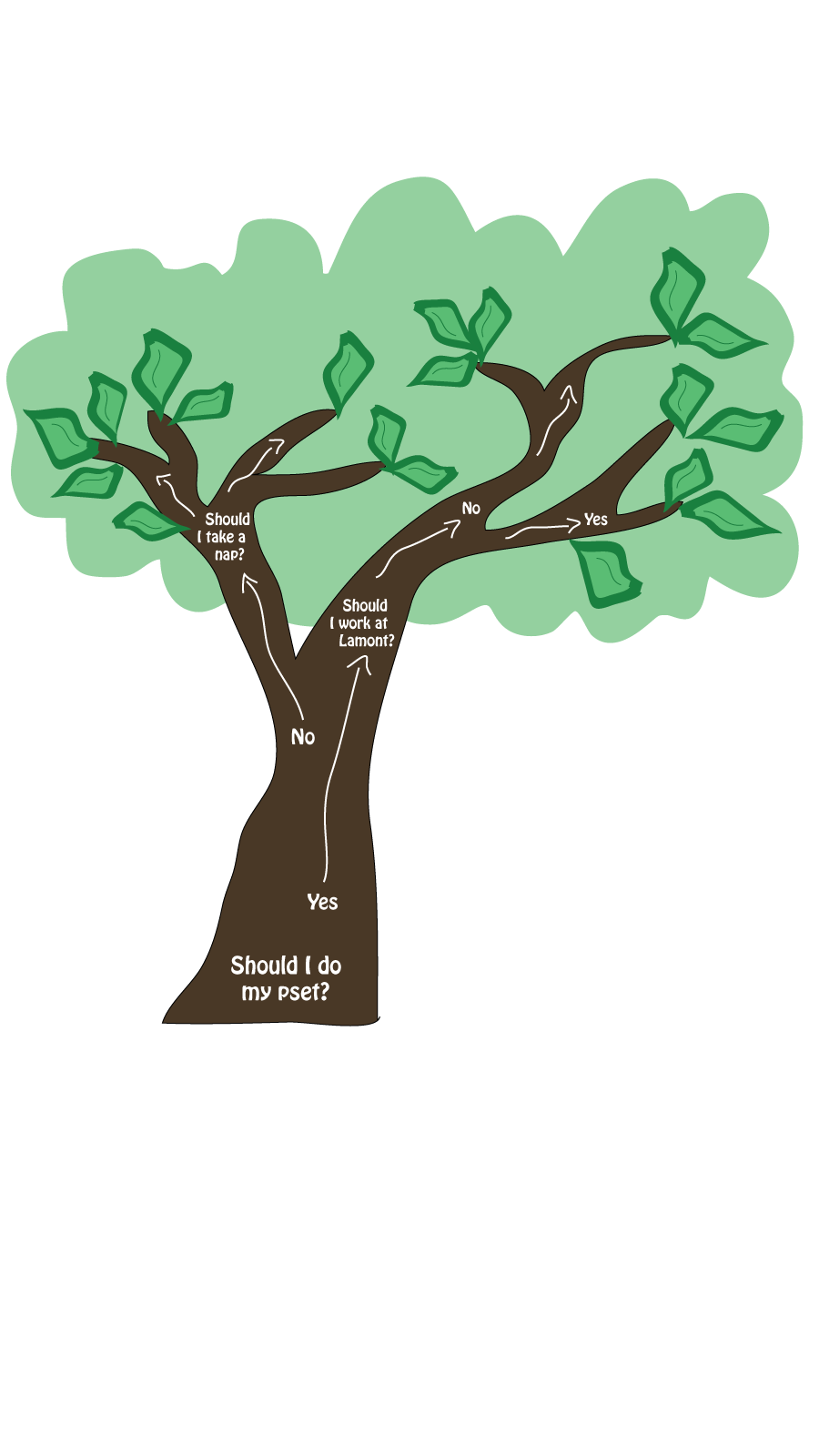 A decision tree — a much lower tech means of studying decisions than the experiments at the Decision Lab.
Advertisement
Advertisement

However, a peek inside one of the cubicles transforms the room from a mundane suite into a playground lifted straight from the mind of a mad scientist.
By Miroslav Bergam and Aristotle M. Vainikos

At first glance, the room could easily be mistaken for a stereotypical office space. The walls are bland; the room’s 32 cubicles are aligned in neat, angular rows; the overhead lights emit a dull glow.

A peek inside one of the cubicles, however, transforms the room from a mundane suite into a playground lifted straight from the mind of a mad scientist. 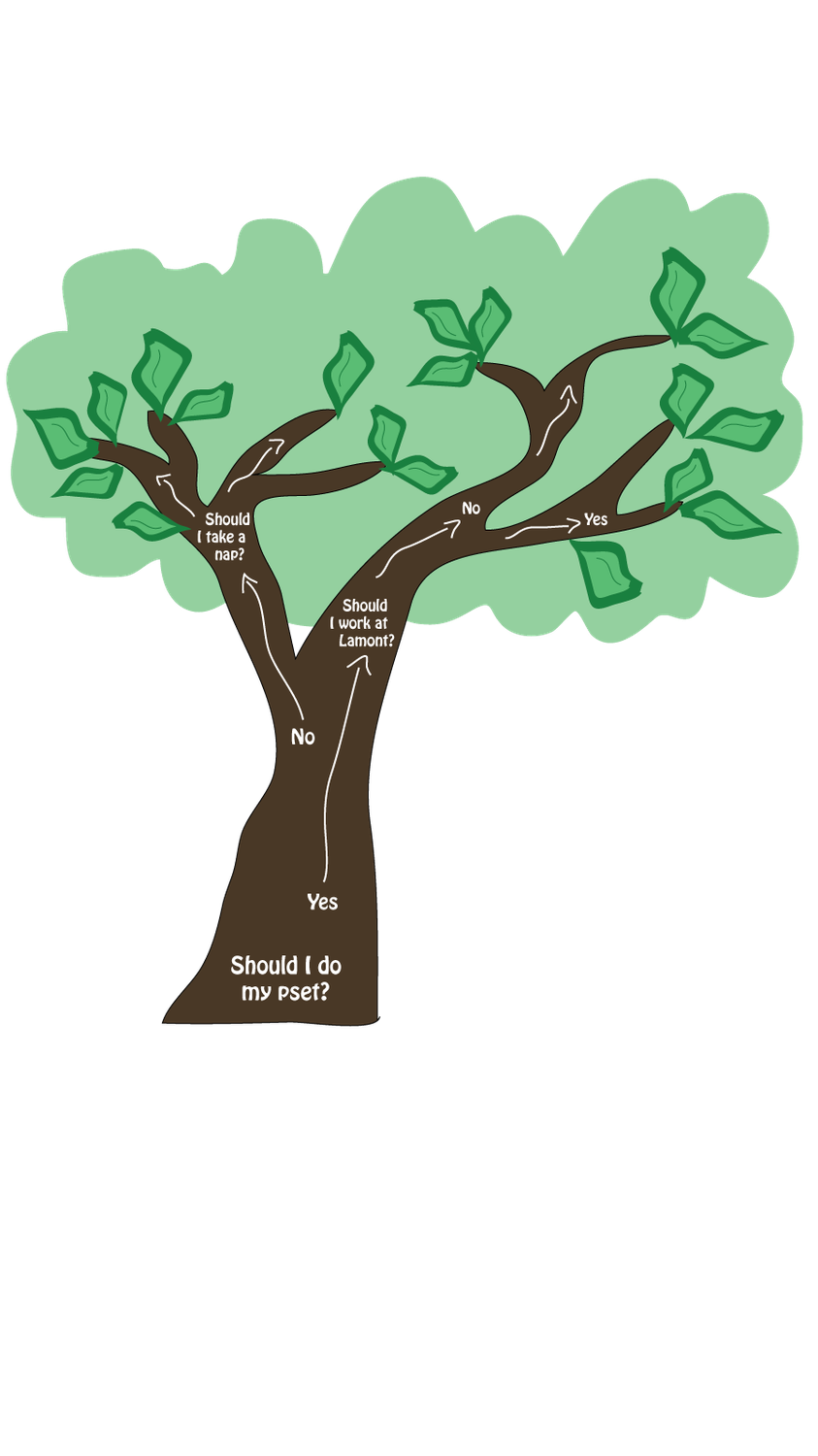 A decision tree — a much lower tech means of studying decisions than the experiments at the Decision Lab. By Alina Hachigian

Welcome to the Harvard Decision Science Laboratory. Each cubicle is a fully-equipped command room. A camera sits behind the desk, closely monitoring the actions and reactions of the seated individual. A drawer underneath the desktop contains a docking station for biophysical nodes — gauges that are connected to the individual to accumulate response data. Two computer monitors within the cubicle aggregate and assess this information, while also feeding video footage to a large touchscreen monitor at the very front of the room. This sleek screen controls air temperature, lighting levels, and even the room’s physical arrangement — parts of the space can be blocked off at any time by a series of mechanized sliding partitions.

Founded in 2008 by psychologist and Harvard Kennedy School Professor Jennifer Lerner, the lab is an innovative research hub for all things related to the human mind. From behavioral economics to neuroscience, the space hosts a plethora of high-tech experiments aimed at unpacking the human brain, all conducted under highly controlled conditions.

Charlotte Ruhl ’22, a research assistant and psychology concentrator, describes how the Harvard Decision Science Lab’s structure is unique: “Your typical lab is structured so that you have one principal investigator, and you study one thing, like infant brain development or adolescent depression. But our lab takes in studies from literally all over.”

The lab receives proposals for studies from the Harvard Kennedy School, the Medical School, and the Law School; other universities like Boston University and Stanford; and even institutions abroad. The researchers at the Decision Science Lab then use the lab’s resources to conduct the studies they receive.

One core reason that researchers from different schools, universities, and countries use the Harvard Decision Science Lab rather than conduct the studies themselves is because of the lab’s access to new technologies. Ruhl highlights parts of the lab’s cutting-edge research: in one study, participants build robots with an augmented reality headset; in another, participants solve mazes with eye-tracking glasses.

Additionally, the expertise and experience of the lab managers set the lab apart. Wyatt W. Hurt ’21, the head research assistant, explains that the lab allows for “cross pollination” of ideas. “If we see a study from Harvard Business School and another person from the [Government] department comes, we can say, ‘Maybe you can use their method.’ We’re always able to facilitate collaboration because we are involved in all the projects.”

Research assistants like Ruhl end up with a considerable amount of responsibility in the studies. Ruhl was drawn to decision science because she “was trying to steer away from the more clinical aspects of psychology and get more involved in the social side,” she says. Decision science also made sense on a personal level for Ruhl, who describes herself as a “really indecisive person.”

Alkistis Iliopoulou, the director of the lab, shares Ruhl’s positive perception of the field of decision science. According to Iliopouplou, decision science is “needed to be able to decode people, and understand patterns, and design the right theories that apply to every human being. There are applications for policy, business, education, public health.”

Iliopoulou, a behavioral economist and Kennedy School graduate, joined the lab two years ago. When she arrived, she was tasked with revamping the lab so it could maintain its relevance in an era when microstudies can be completed using online platforms offered by companies like Amazon instead of in physical laboratories. Iliopoulou set out to implement new approaches to lab logistics, and it has worked: With a study pool of over 17,000 applicants — about 10,000 of them active at any one time — the Decision Science Lab is the largest and most diverse behavioral-studies space in the United States.

It’s also one of the most efficient. When Iliopoulou first arrived, she was told that the maximum number of study subjects a lab could recruit in a few months was 250. “A few months ago, we had a study reach over 1,000 [people] in a month,” she says. “That’s unreal for lab standards.”

In part, the lab’s vibrant study pool and effective protocol account for its favorability among a wide swath of researchers.

While some universities have labs that are segregated by discipline, Iliopoulou tells us that the lab “serves any type of researcher, at any level — could be undergraduate students, extension school. The lab belongs under the Kennedy school, but serves all of Havard, and other schools as well, and organizations outside [of Harvard].” Even the Federal Reserve of Boston has engaged with the lab in the past to study how individuals respond psychologically to interest rate hikes.

But for Hurt, remembering to treat every test subject as a human being is far more important than big-name partnerships.
“I think some labs view people just as participants,” Hurt says. “The money is certainly a part of it, but people are also excited to support the research community. People are enjoying themselves, and laughing. Even people from Cambridge and Boston, they value serving this community. We treat them like they’re people.”

Iliopoulou describes how administrators have even stopped by the lab to serve as study participants. According to her, all it takes is one study, and individuals from all walks of life, “from a homeless person to a professional who just finished work across the street,” can enter the lab on a whim and leave more informed about, and engaged with decision science than ever before.