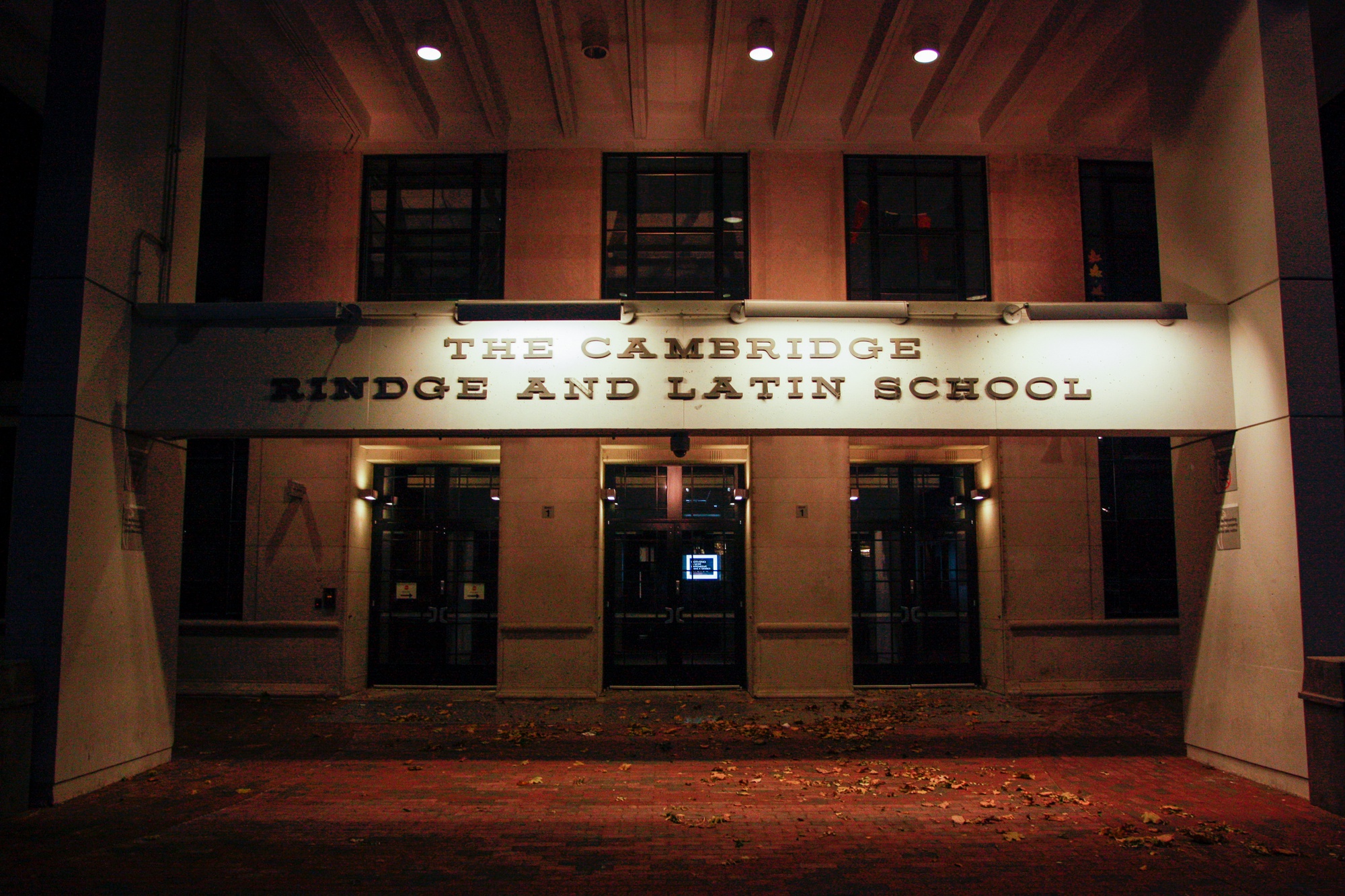 The Cambridge Rindge and Latin School is a public high school in Cambridge, MA. Over the past three years, the school has witnessed a series of racist graffiti incidents.
Advertisement
Advertisement

Does Cambridge Have a Hate Crime Problem?

On Oct. 28, the Cambridge City Council moved to address hate crimes like these. The body voted unanimously to pass an ordinance “to determine Cambridge’s threat level from hate crimes and other related events” and empowered City Manager Louis A. DePasquale to decide on an appropriate response.
By Malaika K. Tapper

The bathroom in Cambridge Rindge and Latin School had been locked for days — marked off with red tape, closed for maintenance. But this was not a routine cleaning. Rather, they were scrubbing away evidence of hate — a swastika had been spray-painted on the bathroom wall.

This 2016 incident was the first time CRLS graduate Noah Y. Epstein ’21 remembers a hate symbol appearing on the walls of his school, the only public high school in Cambridge. It would not be the last.

In a sense, this became a routine sort of maintenance. During his senior year, from fall 2016 to spring 2017, Epstein recalls a double ‘H’ — shorthand for a Nazi slogan — appearing on a bathroom wall and not long later a quote from the Confederate Manifesto.

On Oct. 28, the Cambridge City Council moved to address hate crimes like these. The body voted unanimously to pass an ordinance “to determine Cambridge’s threat level from hate crimes and other related events” and empowered City Manager Louis A. DePasquale to decide on an appropriate response.

The ordinance’s preamble explains that “counts of hate crimes, hate speech, and other related events have been on the rise in recent years,” and suggests that “Cambridge is not immune to these incidents as physical attacks, vandalism and damage to property, and hate speech have been documented or reported in some fashion in recent month, including events in the Cambridge Public School System.”

Reports of hate crimes in Cambridge spiked to 25 in 2016 — Epstein’s senior year, which coincided with the election of President Donald Trump. In 2017, only nine were reported, but in 2018, that number rose to 16 — a 78 percent increase from the year prior and 23 percent above the 10-year average of 13.

The ordinance calls on DePasquale to consult with the school department, city officials, and groups like the Urban Area Security Initiative and the Southern Poverty Law Center. Any provisions beyond this remain unclear — the details are left up to the City Manager and the outside groups.

DePasquale and City Council members did not respond to multiple requests for comment.

With the passage of the ordinance, the Cambridge City Council has moved to formally assess and respond to hate crimes, perhaps marking a breaking point: No longer can the burden of addressing the incidents rest solely on student affinity groups and schools; instead, the onus has shifted to the municipal government.

Groups including school officials and the police department view the racist vandalism in Cambridge Public Schools as one-off incidents that do not represent CRLS or Cambridge as a community. Many students, however, identify a persistent — if less overt — current of racism at CRLS, causing them to wonder if the vandalism incidents ought to be written off as mere irregularities. As the municipal government positions itself to address the rising prevalence of hate crimes, the question remains: Does Cambridge have a hate crime problem?

Ayesha M. Wilson is wearing a sweatshirt that reads “Just a kid from Cambridge” and a residual smile — she has just run into a former student in line for coffee. Wilson won a seat in the Cambridge School Committee in the municipal elections held on Nov. 5 and graduated from CRLS in 2000. “When these acts happen,” she says, referring to the graffiti incidents at her alma mater, “we don’t create these spaces. Young people and staff kind of have to create those spaces for themselves.”

After the first swastika appeared during Epstein’s senior year, the Jewish Heritage Club organized a series of forums to educate students about acts of hate and bias. Epstein says the first meetings were widely attended and successful. But soon, the student leaders graduated, and the momentum died down. No permanent alternative has taken its place.

But for Wilson, the onus to educate in the wake of the incidents, to “create spaces” of healing and solidarity, ought to have always fallen on the adults in the school — not its students. “It is our responsibility as educators to make sure that we're building it into our curriculum,” she says.

“I’ve got to keep going back to education — it has to be that,” she insists. “Our people have to be more educated around the different diverse communities that are within our city.”

The City Council order reflects a frustration — shared by Wilson and others — that the school district has not done enough, says Will H. MacArthur ’20, a former Crimson columnist who graduated from CRLS in 2016 and ran for School Committee in 2017.

Epstein is hopeful about the ordinance. Perhaps the municipal government will assume more responsibility, shifting the burden away from students.

“I think that it’s a much stronger step,” Epstein says. “When swastikas showed up the first time around, there was a School Committee resolution that said, basically, ‘we condemn hate and strive to build a stronger community,’” he continues. “There was no action item.”

In many ways, Cambridge is the epitome of a progressive city, and the CRLS student body reflects that. Epstein remarks, “There’s a reason that it’s called the People’s Republic of Cambridge.”

But in a place as liberal as Cambridge, Wilson wonders how the recurrence of such attacks can be explained — and what that contradiction might say about the city. “The challenges that are faced by our communities doesn’t match the fact that we’re that liberal or that progressive.”

Addressing that contradiction, however, Pete Simi, a professor at Chapman College who studies extremism and white supremacy in America, suggests that the problem of hate crimes “doesn’t understand geographic boundaries.” “It doesn’t understand the political orientation of the area,” he says, “and in some ways, a liberal area becomes a target.”

Some see hate crimes as anomalies in Cambridge, gashes in a predominantly blue city. Others think they might say something about Cambridge itself.

Deputy Superintendent Rob Lowe of the Cambridge Police Department believes the problem is not “systemic.” The attacks, he posits, are not endemic to the Cambridge community. “A lot of these are often one-off incidents, if that makes sense. We’re not typically seeing patterns.”

As Wilson argues, “As progressive as Cambridge is and as liberal and Cambridge is, we need to also think about every individual’s ownership.” She wonders how each resident’s biases “tie into how we create a city that is like this.” A city is formed by the people who live there — their prejudices, along with everything else, are inextricable from the city itself.

CRLS has also had trouble reconciling evidence of bigotry with their liberal community values. After each incident, the school sends out an email. The messages condemn hate and reassure students — MacArthur felt that one idea persisted: ‘This is not who we are as a community.’

“If you keep saying that, even as incidents of hate keep happening, I think it can kind of impede having a serious, community-wide investigation of why this keeps happening,” Macarthur explains. “Maybe right now, this is who some people in our community think we are.”

Tal T. SebellShavit, a physics and astronomy teacher at CRLS, does not believe these incidents represent the school: “It doesn't mean that it’s a bad community,” he says. “It means that a bad thing happened in a in a good community.”

SebellShavit does, however, understand a tension between viewing the graffiti as isolated incidents and a broader reckoning with racism at CRLS. “I think that that’s a little bit of an unpopular opinion, especially in a district that is working on microaggressions, on having all students feel safe.”

CRLS has faced controversy over other instances of racism in the past few years. For example, in February, a white School Committee member used the n-word in a high school classroom. In 2017, the Black Student Union released a series of videos in which mainly students of color recounted instances of microaggressions and discrimination they had encountered from teachers and peers. Along with the vandalism, a less visible, systematic racism persists at the school.

CRLS administrators did not respond to multiple requests for comment.

“I have no idea what the district is trying to do to combat this,” SebellShavit says of hate graffiti. While the district has acknowledged microaggressions, he is unsure about their operations regarding hate crimes. He continues, “No one’s doing anything about this. And if they are, they’re doing it all under the water.”

Though the School Committee may have previously fallen short, Wilson hopes to turn that around. “I want to make sure,” she explains, “that we’re coming together and just having a safe space, where you could just share any challenge that you’ve had in our district, whether that is specific hate crimes, microaggressions, or macroaggressions.”

“Some of these incidents do fit the definition of hate crimes,” MacArthur says, “but even the ones that don’t are part of a broader climate in the school I think it should be considered the district’s responsibility to help address.”

The City Council ordinance addresses only criminal acts — and gives City Manager DePasquale broad autonomy to work with outside groups on the problem. How DePasquale will proceed remains to be seen.