Feedback for the Hands that Feed Us

For the first few weeks of freshman year, I was excited about the food in Annenberg — the pad thai was tangy, the chicken nuggets were crispy, and the cookie bars were decadent. But, during lunch one day in mid-September, I scooped myself a big bowl of HUDS hummus with a side of carrots and pita bread. After a few bites, as I prepared to eat a triangle of pita with a big glob of hummus, I suddenly found an unidentified object in my bowl of hummus. It was a small, white, solid substance. I thought it could be a fingernail, maybe even a tooth.

During Opening Days my friends and I had noticed advertising on the Annenberg napkin holders for a HUDS texting service. We never thought to send a text, but with this unidentified object lingering in my hummus, I sent my inaugural message to HUDS.

Harvard University Dining Services allow students to text their comments about their meals. By Nina B. Elkadi

After sending the text, I was still hungry, so I continued eating my hummus and avoided the unidentified object. I didn’t get a response, but my friends and I lingered around Annenberg. Around 15 minutes later, a HUDS worker approached our table.

“Who has the item they found in their hummus?” she asked.

The woman carefully investigated the hummus, and if I remember correctly, identified it as a grain of rice. I was no longer interested in the object in my hummus, but I did grow curious about the people behind the HUDS texting feature.

HUDS rolled out the program in July 2017. Students can text the dining hall staff about anything related to their HUDS experience in a particular dining hall. For example, if your comment or question regards Annenberg, you text “Berg” at the beginning of your message to 55744.

Davidson guesses that around 98 percent of the almost 5,000 messages HUDS has received are of a“positive nature,” whether that be praise for a certain dish or a compliment towards a staff member. The other two percent are typically requests for certain dishes. Through the texting feature, students can also send in recipes from home. That’s how the legendary “Red Spiced Chicken” came to HUDS dining halls.

Davidson says there is no “magic number” of texts that sparks dining hall change. For bigger changes, the texts are incorporated into a formal process: Davidson prints out some messages with requests and hands them over to the Culinary Director to follow up.

Jack C. Lawlor ’22 first began texting HUDS after seeing the advertisement on an Annenberg napkin holder. Lawlor wanted to see more parsnips in the dining hall so he sent the following message to the HUDS line: 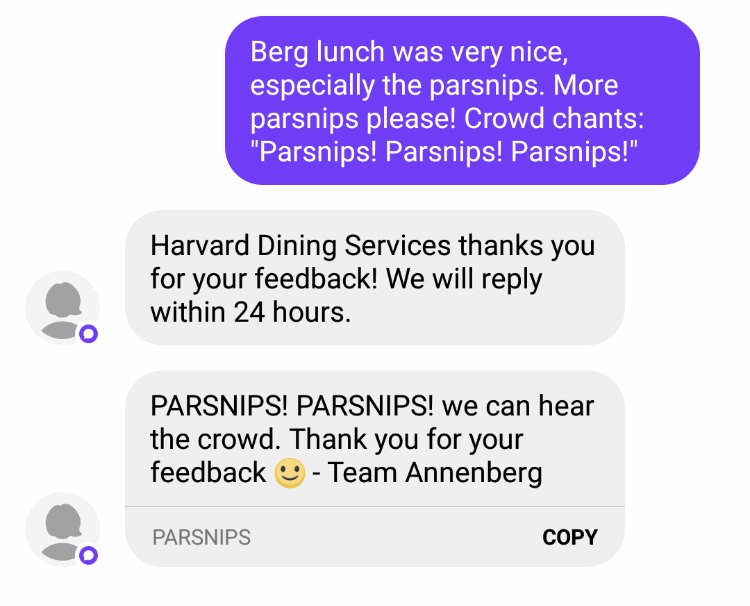 Jack C. Lawlor texted HUDS about his enjoyment of parsnips in the dining hall. HUDS was equally excited. By Courtesy of Jack C. Lawlor

“Now I’ve noticed they’ve started putting out bowls of straight parsnips,” Lawlor says. “I’ve wondered if this is because of my grassroots activism.”

Not every text corresponds to change in the dining hall, however. Olivia M. Price ’21, a lover of Honey Oat Clusters, texted HUDS because she was frustrated with the unchanging cereal selection in Mather.

“I texted [HUDS] and I waited a few days but the [Honey Oat Clusters] weren’t there,” Price says. “I texted them again, and they said they like to rotate to everyone’s taste,” she adds, mournfully.