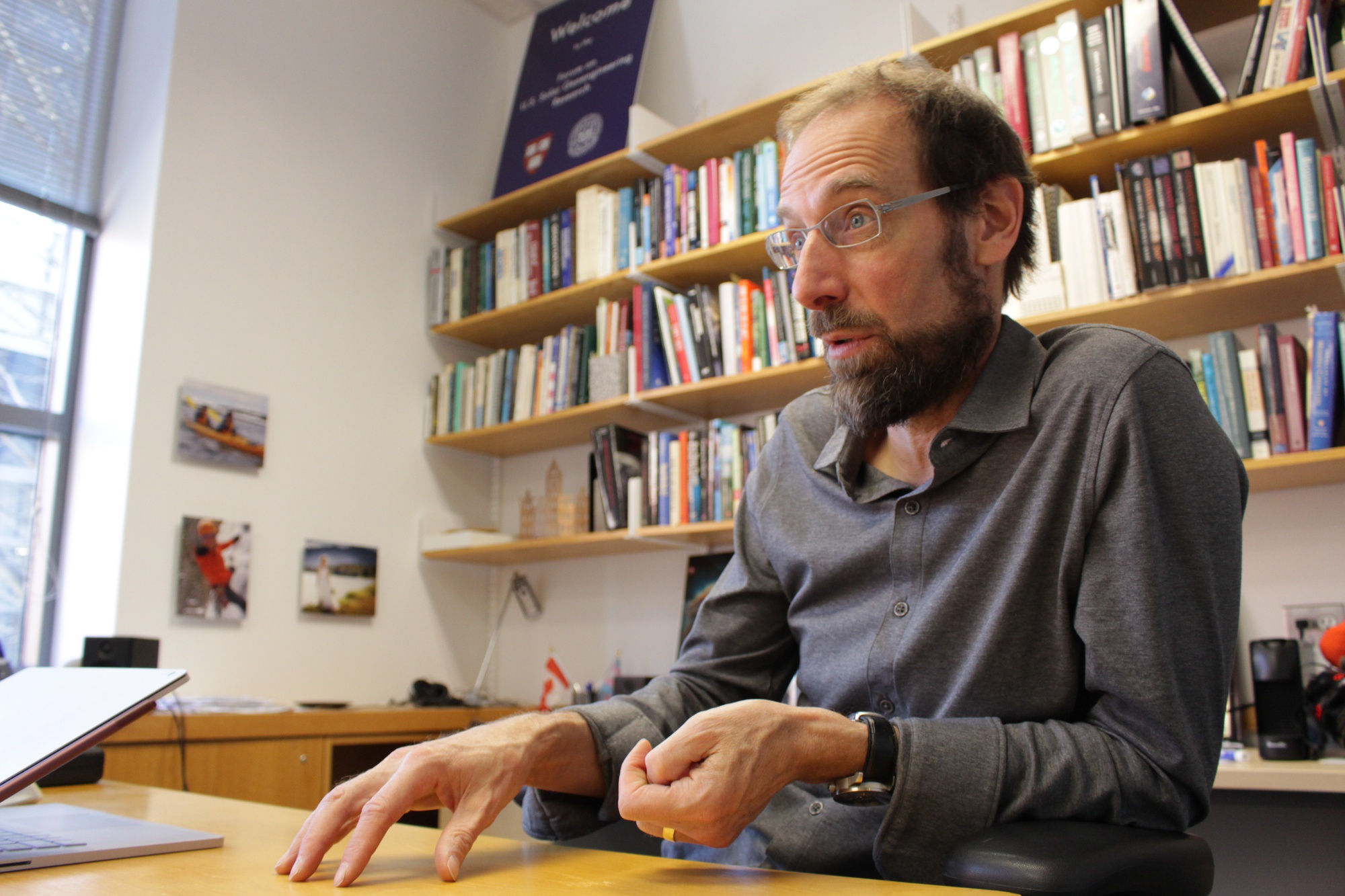 As the Gordon McKay Professor of Applied Physics at the Harvard School of Engineering and Applied Sciences, David Keith is best known for his work on the science, technology, and public policy of solar geoengineering.
Advertisement
Advertisement

Year after year, the threat of an impending climate catastrophe looms larger in the public consciousness. David W. Keith, an applied physics professor, is working on a solution.
By Carl F. Denton and Virginia F. Tiernan

David W. Keith’s office is tucked inside a glass skywalk between the Mallinckrodt and Hoffman labs, nestled within a maze of cramped hallways that belie the massive scale of his research. Year after year, the threat of an impending climate catastrophe looms larger in the public consciousness, and Keith, an applied physics professor, is working on a solution.

Keith is a co-director of Harvard’s Solar Geoengineering Research Program, a cross-disciplinary collaboration examining approaches to and policy surrounding solar geoengineering. He leads a group that researches solar geoengineering, a technique that aims to reflect some of the sun’s energy to mitigate global temperature increases. In 2019, Keith, in collaboration with Chemistry Professor Frank N. Keutsch, may become one of the first to execute a controlled experiment in geoengineering.

The experiment is called the Stratospheric Controlled Perturbation Experiment. It would test a version of geoengineering called Stratospheric Aerosol Injection, which involves spraying sulfate aerosols into the stratosphere to reflect a small percentage of incoming sunlight. It’s what media outlets have in recent months been calling “dimming the sun.”

SAI is only one of many proposed techniques under the heading of solar geoengineering. Other proposals have included sending mirrors to space, painting mountaintops white, and brightening the clouds over the ocean to make them more reflective. “The idea is actually really old,” Keith says. “In some sense there is not very much innovative here — the idea emerged about the same time as modern understanding of climate.” A number of researchers and advocates of geoengineering suggest that SAI would be one of the most efficient and cost-effective methods for geoengineering.

Geoengineering has encountered significant resistance over the decades. Among the most common critiques of geoengineering is that it’s only a temporary solution that might divert resources from more essential efforts like emissions reduction. But Keith says that geoengineering isn’t intended to be used in isolation.

“Nothing about solar geoengineering changes the fact that if you want a stable climate, you have to bring emissions to zero,” he says. “That ultimately has to involve laws that prevent people using the atmosphere as a waste dump for carbon.”

Despite his research on the topic, Keith is hesitant to say that geoengineering should actually be used. Instead, he says he’s motivated by the conviction that “it’s better to have more knowledge about things.” Given that solar geoengineering has never before been tried, Keith claims that it would be difficult to anticipate the political consequences of his research.

“I think there are a lot of different factors that factor into the political fight between environmental forces and fossil fuels,” Keith says. “I don’t see that some knowledge of [geoengineering] — and, after all, there’s already knowledge about this — would actually shift that boundary.”

Though the aim of solar geoengineering is to mitigate the impacts of climate change, Keith acknowledges the many risks inherent in potential projects, including disturbing the stratosphere’s chemistry and circulation. Additionally, aerosols emitted into the stratosphere would eventually return to the lower atmosphere as air pollutants.

Still, Keith admits that any proposal for geoengineering comes with a great deal of baggage, and he says he shares concerns about the use of geoengineering in practice. To Keith, research must be conducted impartially, removed from the influence of fossil fuel interests.

“I think work on solar geoengineering should be strongly noncommercial. I think we should try to ban commercial work, and I think it is very important to be open access and we try and stamp out patenting and really stamp out private money,” he says. “I think that’s really important because for solar geoengineering, there’s no need to make it cheaper. It’s probably already too cheap.”

The risks inherent in geoengineering are steep, as Keith is among the first to admit. “There is a coherent case to ban [geoengineering] research altogether,” he says, in reference to its potential hindrance of emissions reduction research.

Still, he presses on.