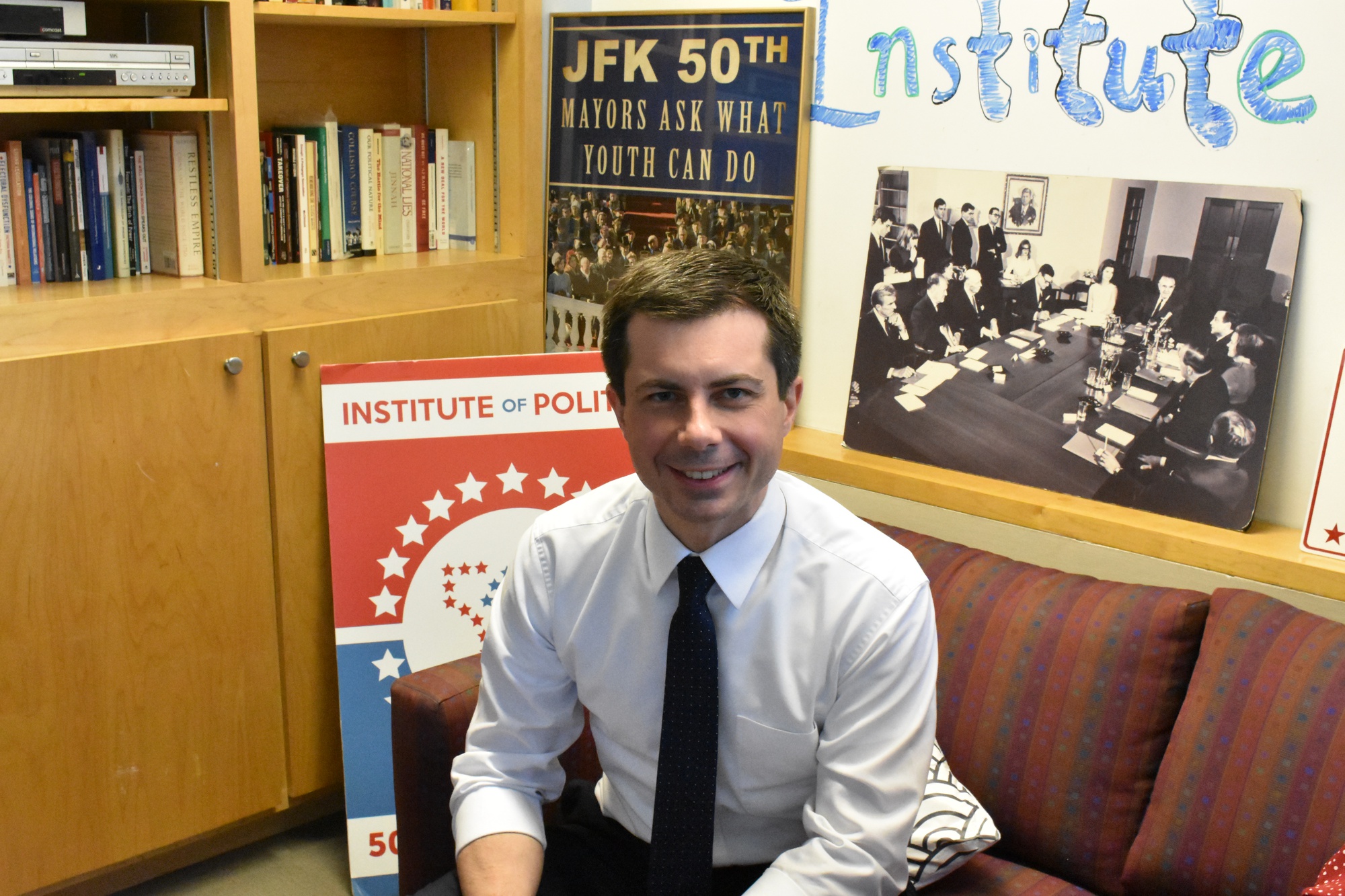 Peter P. M. Buttigieg ’04 is by far the youngest presidential candidate for the upcoming election at age 37.
Advertisement
Advertisement

FM sat down with Mayor Pete in a second-floor office at the Institute of Politics, an old haunt from his time as IOP president. We talked about his college days, “The West Wing,” and his Supreme Court-packing proposal. Today’s IOP student leaders have placed a poster behind him for the occasion that reads: “Mayors ask what youth can do.”
By Madeleine M. Joung

On the 2020 campaign trail and in his hometown of South Bend, Ind., Peter P. M. Buttigieg ’04 is best known as Mayor Pete. Just fifteen years ago, he was the student president of Harvard’s Institute of Politics; soon, he will officially launch his campaign to become the president of the United States.

Though he was initially considered a long-shot, the 37-year-old mayor appears to be gaining traction. As of April 1, Buttigieg was the second-most Googled prospective Democratic presidential candidate, and a recent Iowa caucus poll revealed him to be narrowly in third place among Democratic primary contenders (although the survey’s margin of error was 6.2%).

FM sat down with Mayor Pete in a second-floor office at the Institute of Politics, an old haunt from his time as IOP president. We talked about his college days, “The West Wing,” and his Supreme Court-packing proposal. Today’s IOP student leaders have placed a poster behind him for the occasion that reads: “Mayors ask what youth can do.” 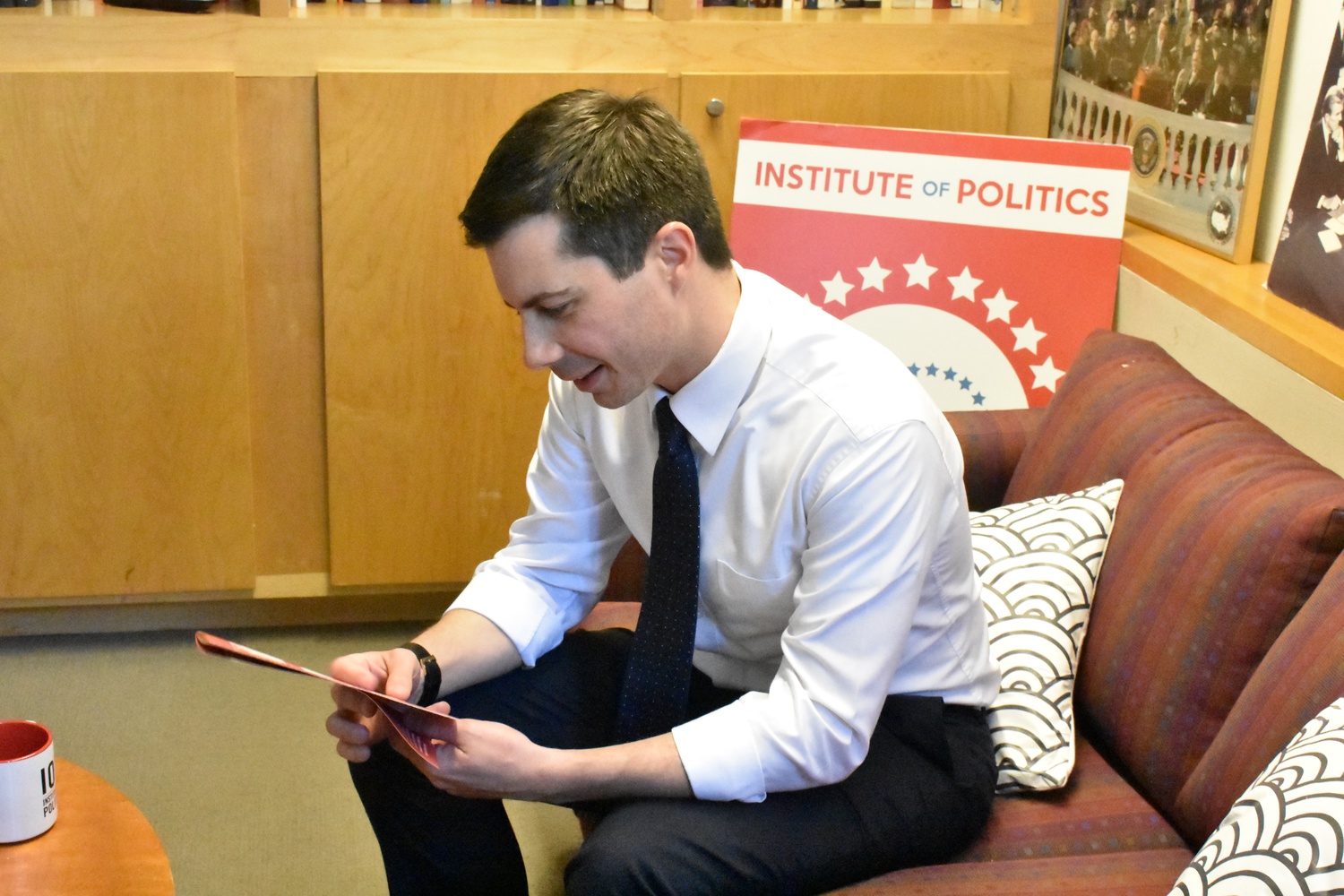 Mayor Pete served as the President of the Institute of Politics during his time at Harvard. By Amanda M. DiMartini

FM: What’s it like being back at the IOP, where you served as president?

PB: This place shaped me, so much so that my parents would kind of wryly ask whether I was attending Harvard College or whether I was attending the IOP. There were many very exciting moments here. I remember Ted Sorensen was here and wished me luck as I went to give my speech campaigning to be the student president, and said something kind, and it felt like a benediction from the Kennedy era. Just being surrounded by that kind of history was really exciting. But more than anything it was just being around people who cared about the country, cared about politics.

FM: The Crimson reported back in the early 2000s that you used to organize watch parties of “The West Wing”. I saw that you met Bradley Whitford recently — and I think Richard Schiff also tweeted his support for your campaign. How did that show influence your political upbringing?

PB: I think “The West Wing” created a certain view of what we hope the White House would be like, in terms of the intellect and in terms of the intentions of the people who are there. And I think one reason now people are returning to it a little bit is it’s kind of an antidote, if only by escapism, to the moment that we’re living in. So of course as somebody who grew up on that stuff, it’s pretty moving — and a bit unreal — to find now that I’m being talked about so kindly by some of the people who helped shape those stories to begin with.

FM: To go back to your time at Harvard, why did you decide to study History and Literature, as opposed to, say, Government?

PB: I did History and Literature because I cared about literature a lot, and I realized almost anything else I wanted to study, I could study it through the guise of history. So if I wanted to do politics, I could do Ernest May’s course on the Cold War. And it really allowed me to broaden my range of understanding how the world works, without being too hemmed in to any one discipline. In the end, it was probably mostly the literature classes that made the deepest impressions. And then, the funny thing about studying Arabic was that my freshman fall, the fall of 2000, it was a pretty exotic thing to do. Of course a year later, Arabic studies here kind of blew up, because I think many more people sensed the importance of it.

FM: You’ve talked about how it took years for you to come out as a gay man. When you were a student here, what was the environment like for LGBTQ students?

PB: As a student here, to be honest, I wasn’t even out to myself. It took a long time for me. I would say that this was a place that broadly wanted to be accepting, but still had a long way to go. And at the same time, you know, if my home in Indiana were as accepting as Harvard, I probably would’ve been able to get here [sooner].

FM: While you were a student, where were your favorite spots on campus?

PB: I spent a lot of time in this room, in this student office, which was actually a little grubbier in my day. There’s the Farnsworth room in Lamont, a very important place. I hope that’s about the same. And any place you can see Memorial Church. Something about that just sort of perfect architectural form, it always kind of centered me, even though I didn’t go there very much.

FM: You’ve said that the right has a monopoly on religion in politics. And you’ve cited Mike Pence as an example of that. On Harvard’s largely secular campus, what was your faith like during college?

PB: I took a class with Peter Gomes, and he was a very influential figure here on campus, and somebody I really admired. I think it was, having come up with a certain — somewhat different version of religion than I was exposed to in Catholic high school education, I began to understand just how much range there was in the kind of social teachings of Christianity. But I didn’t have much of a religious life until I got to grad school.

FM: You wrote in your book that the monuments in Memorial Church and Memorial Hall influenced your decision to join the military. What are your thoughts on being one of the relatively few students to do so?

PB: At the IOP, I was soaked in the Kennedy legend, the idea that part of life is public service and that for many, that means military service as well. I don’t mean to say that you have to serve in the military to be a good political figure or public servant, but I think it was here that I began to imbibe that idea that especially when you have a privileged education, that you have an outsized responsibility to make yourself useful, even if that means taking risks. And so I think I carried that ethic with me, but it took me a while to make good on it. And I’m glad in the end that I did.

FM: Before you joined the military, you worked for McKinsey. I know that a couple of reporters from The New Yorker and New York Magazine have asked you about your opinions on McKinsey’s role in opioid sales and identifying Saudi Arabian dissidents. What consequences do you think McKinsey ought to face for its role in those scandals?

PB: Well, I think they need to do a reckoning, first of all, on what kind of clients they’re going to be serving. Some of these questions are legal ones, and I don’t understand the cases well enough, but what I do know is that a firm that wants to be as prestigious as McKinsey needs to also have the absolute highest standards on who it decides who to do business with. And bigger’s not always better.

FM: You’ve suggested that you’d be open to the idea of statutorily expanding the Supreme Court to 15 justices. Are you concerned that this would open the door to some instability?

PB: Well, it would have to be well thought-through and thoroughly debated. But what interests me is a change that would diminish the likelihood of the Supreme Court being viewed as a political body. And if we get it right, it should be something that would stand the test of time, and that there would be a bipartisan consensus around doing. It’s not about believing that the Supreme Court’s too conservative — even though I do believe that it’s more conservative than the American people. This is about the court getting politicized, and I think there should be a robust American majority around the idea of not allowing it to remain politicized.

FM: In your memoir, you contrast your college days in Cambridge with your childhood in South Bend. Having lived in both the Midwest and the Northeast, what common ground do you see between Indiana and Massachusetts voters?

PB: Well, one thing is that no state should be painted with a broad brush. There are communities like Springfield, Longmeadow, Fall River, that would probably have more in common with South Bend than they might with Cambridge. It’s important at the outset to recognize how varied each of our states can be. I think another commonality is that our communities are looking for answers that don’t depend on turning back the clock. We need to figure out how to be true to the most compelling and appealing parts of our tradition without being trapped by them. And I think that’s one of the questions at stake as we try to figure out how to have a more robust account of mastering the changes coming in our future, [rather] than just [making] impossible promises to rewind to the past and make America great again.