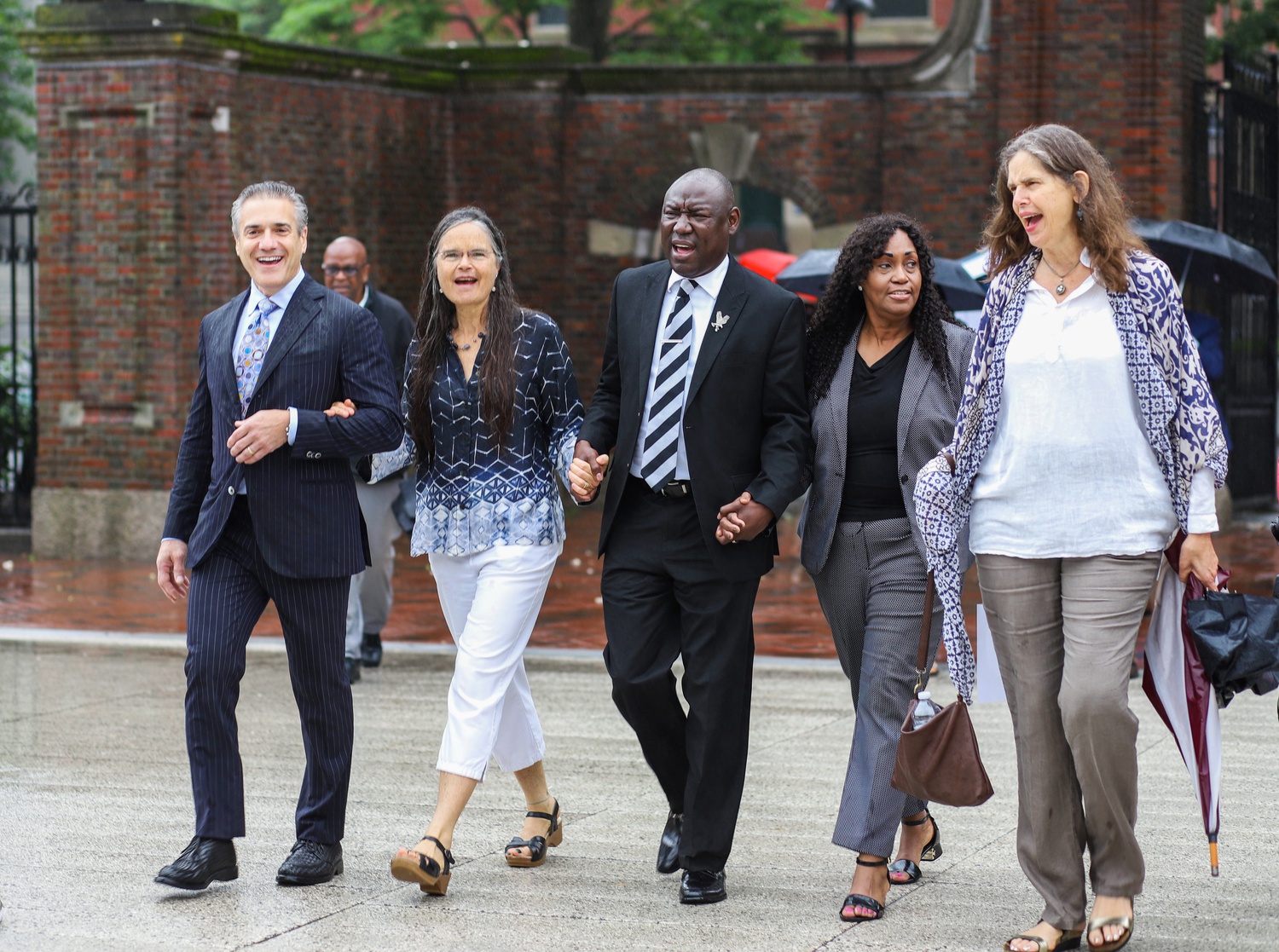 A group representing more than 40 descendants of former Harvard professor Louis Agassiz delivered a letter Thursday to University President Lawrence S. Bacow urging him to turn over a set of historic slave photos to a Connecticut woman who alleges they depict her ancestors. By Amanda Y. Su
By Juliet E. Isselbacher and Molly C. McCafferty, Crimson Staff Writers

A group representing 43 descendants of former Harvard professor Louis Agassiz delivered a letter to University President Lawrence S. Bacow Thursday urging him to turn over a set of historic slave photos to a Connecticut woman who alleges they depict her ancestors.

The letter comes three months after Norwich, Conn. resident Tamara Lanier sued the University for allegedly possessing and profiting from some of the first known photos of American slaves, which she says depict her great-great-great grandfather, Renty, and his daughter, Delia. She alleges Agassiz commissioned the daguerreotype photos, which date to before the Civil War, in an attempt to prove a scientific theory of white superiority.

“For too many years, we have ignored Agassiz’s role in promoting a pseudoscientific justification for white supremacy,” the letter reads. “We see this as a collective failure to live up to our values of anti-racism and compassion. Now is the time to name, acknowledge and redress the harm done by Louis Agassiz.”

Lanier is requesting that the University give her the daguerreotypes and pay her punitive damages. She is also asking Harvard to acknowledge “that it was complicit in perpetuating and justifying the institution of slavery,” according to the suit.

The group, led by Lanier and Marian S. Moore — the great-great-great granddaughter of Agassiz — entered Massachusetts Hall, which houses Bacow’s office. Though a security guard asked them to leave, they left the letter at Bacow’s office. The guard told them Bacow was “unavailable.”

“Harvard has and will continue to come to terms with and address its historic connection to slavery,” Dane wrote.

Before marching to Bacow’s office, the group held a short press conference Thursday morning across from the Peabody Museum and Agassiz Hall, during which Lanier and Moore jointly called upon Harvard to return the daguerreotypes to Lanier.

“I don’t think that Harvard has a right to have absolute control over the images given the circumstances of their origin,” Lanier said at the press conference.

Civil rights attorney Benjamin J. Crump, who is serving as counsel for Lanier, said at the press conference that Lanier and Agassiz’s descendants were coming together “on the right side of history.”

The suit alleges Agassiz “commissioned” the daguerreotypes in an effort to document physical evidence of polygenism — the theory that different racial groups do not share a common biological origin. Defenders of slavery used polygenism to argue that African and African-American people were genetically distinct from, and inferior to, white people.

Lanier’s lawsuit states that Renty and Delia were made subjects in Agassiz’s study “without consent, dignity, or compensation.”

“Responsibility for that crime lies squarely with Harvard, which elevated Agassiz to the highest echelons of academia and steadfastly supported him as he promoted and legitimized the poisonous myth of white superiority,” the complaint reads.

In an April interview with The Crimson, Bacow argued that “the law is on our side” in the suit.

At the press conference, Moore said she would encourage “a community process” to evaluate whether the name of Agassiz Hall should be changed.

The Agassiz name on campus honors the contributions of Agassiz’s wife and son, rather than his own, according to Harvard faculty and staff. In addition to buildings, the Agassiz name is affiliated with named professorships and Harvard museums.

The letter from Agassiz’s descendants also alleges that Harvard continues to use the images as sources of income, referencing a 2017 textbook with the image of Renty on the cover that cost $40 per copy.

Lanier said Thursday that though Harvard’s earnings may be minimal, she questions the University’s role as “the ultimate decider of who gets to see [the images] and when.”

Bacow said in April that Harvard does not profit off the images, which are public domain. The museum receives around 10 requests per year to produce high resolution images of daguerreotypes, for which it charges $15 each, Dane wrote in an emailed statement in March.

Dane wrote Thursday that the Peabody museum attempts to engage with “stakeholders” in its collections, including descendants, while also serving as a “steward” of artifacts in fragile condition like the daguerreotypes.

“Because the daguerreotypes are at risk of mechanical, biological, and chemical deterioration, they are stored in a state of the art archival storage room with ideal temperature for preservation,” Dane wrote. “The Peabody Museum works closely with the photographic conservation team at Harvard’s Weissman Preservation Center to ensure the daguerreotypes in its collection are preserved and cared for in accordance with the highest professional standards.”

Lanier originally sued the University in state court, alleging it broke Massachusetts and federal laws in obtaining, keeping, and profiting from the portraits. She also alleges Harvard violated the Thirteenth Amendment, calling the University’s possession of the photos “a continuation of core components or incidents of slavery.”

The University has not yet responded to Lanier’s complaint.