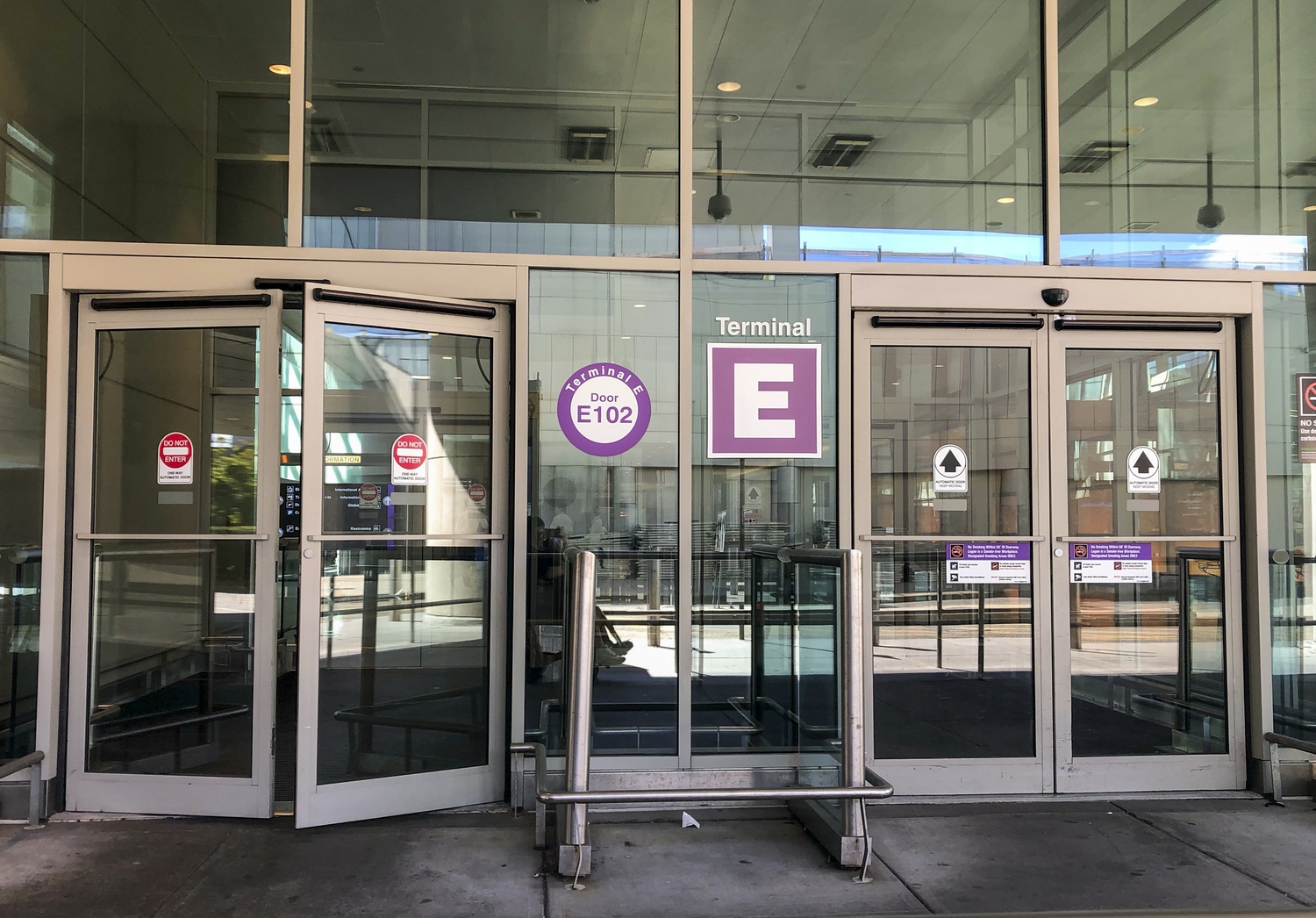 Terminal E is one of Boston's Logan International Airport's many terminals. Ismail B. Ajjawi ’23 was interrogated at Logan upon his arrival in the United States last month. By MyeongSeo Kim
By Shera S. Avi-Yonah and Delano R. Franklin, Crimson Staff Writers

United States Customs and Border Protection denied Ajjawi, a Palestinian resident of Lebanon, entrance to the United States last month after questioning him and searching through his phone and computer. After finding allegedly anti-American social media posts made by friends on Ajjawi’s feed, an official informed him they were canceling his visa and refused him entry to the country.

Ajjawi, who said he did not personally make any political posts, returned to Lebanon Aug. 23 and waited with his family as the College’s start date approached. Meanwhile, his lawyer Albert Mohkiber; AMIDEAST President, CEO, and a former U.S. ambassador Theodore H. Kattouf; and Harvard International Office Director of Immigration Services Maureen Martin worked to advocate on his behalf.

Several organizations including AMIDEAST, a non-profit organization sponsoring Ajjawi’s study in the United States, released statements in support of Ajjawi following the incident.

Mokhiber and Kattouf both said Bacow became personally involved in the case and that his support aided Ajjawi’s eventual arrival ten days later on Sept. 3.

“I'm grateful to your president at Harvard,” Kattouf said. “He was very much a stand-up guy on this issue and it's very much appreciated.”

“This was a very, very unique case with a very unique student, very sympathetic factors, a wonderful president of Harvard, a wonderful CEO of AMIDEAST,” Mokhiber said. “It was a dream team. Everybody came together.”

Mokhiber also said having help from Bacow, Kattouf, and others helped Ajjawi overcome the challenges most international students turned away at the U.S. border face.

“We were successful on this one, but there’s going to be many, many more. They’re not going to have a president of Harvard or their own university or former ambassador or even a lawyer perhaps available to them,” he said. “We have to look to the underlying issue, which is much greater.”

Mokhiber was one of several immigration lawyers who said Ajjawi’s case came amid an increasingly difficult environment for foreign students seeking to study in the U.S.

Some Harvard students also encountered visa issues in 2017, when four graduate students faced challenges arriving on campus as a result of the Trump administration’s travel ban. Three of the students were able to return to campus after three weeks, but one waited eight months to return.

Several factors distinguished Ajjawi’s case, including the Harvard name and CBP’s alleged rationale for sending Ajjawi back to Lebanon, according to immigration lawyer Leon Fresco and Cornell Law School professor Stephen Yale-Loehr. Ajjawi told The Crimson last month that officers denied him entry based on political posts on his Facebook friends’ accounts rather than his own posts.

Fresco said denials of entry are not uncommon, but that Ajjawi’s situation was different from most because of his affiliation with the University.

“Student visa turnbacks have always been a part of what CBP does, but a turnback from a school like Harvard is incredibly rare,” Fresco wrote in an email.

Ajjawi’s case is unusual as many people who are turned away at the border have difficulty challenging the denial, according to Yale-Loehr.

“I think the publicity was a large factor in shaming CBP into letting him reapply for a visa. But in general, if someone is denied a visa overseas or is turned away at the border, there's not a lot they can do,” Yale-Loehr said. “They don't have full due process rights to challenge a denial, because they haven't technically entered the United States yet.”

Yale-Loehr and Fresco both said CBP’s use of social media to bar Ajjawi reflects a growing trend in immigration enforcement.

In June, the State Department announced it would require some applicants to submit social media data as part of visa applications if immigration officials deemed it necessary.

Still, both Fresco and Yale-Loehr said that regardless of whether the State Department already pored over Ajjawi’s online presence, CBP officials have the right to second guess their original assessment. Yale-Loehr added that border officials’ rationale, not their methods, made the case unusual.

“I think it was particularly outrageous, if I have the facts correct, that it wasn't even his social media postings that supposedly caused the problem. It was simply that he had friends who had posted things that he happened to view or have on his phone,” he said.

Customs and Border Patrol spokesperson Michael S. McCarthy wrote in August that Ajjawi was “deemed inadmissible” upon his first attempt to enter the U.S., though he did not specify on what grounds.

Ajjawi returned to campus as his classmates participated in their Convocation, a situation Fresco, Mokhiber, and Kattouf termed remarkable.

“This requires expert advocacy and diplomacy in order to navigate the very tricky legal and regulatory framework that governs these issues,” Fresco wrote.