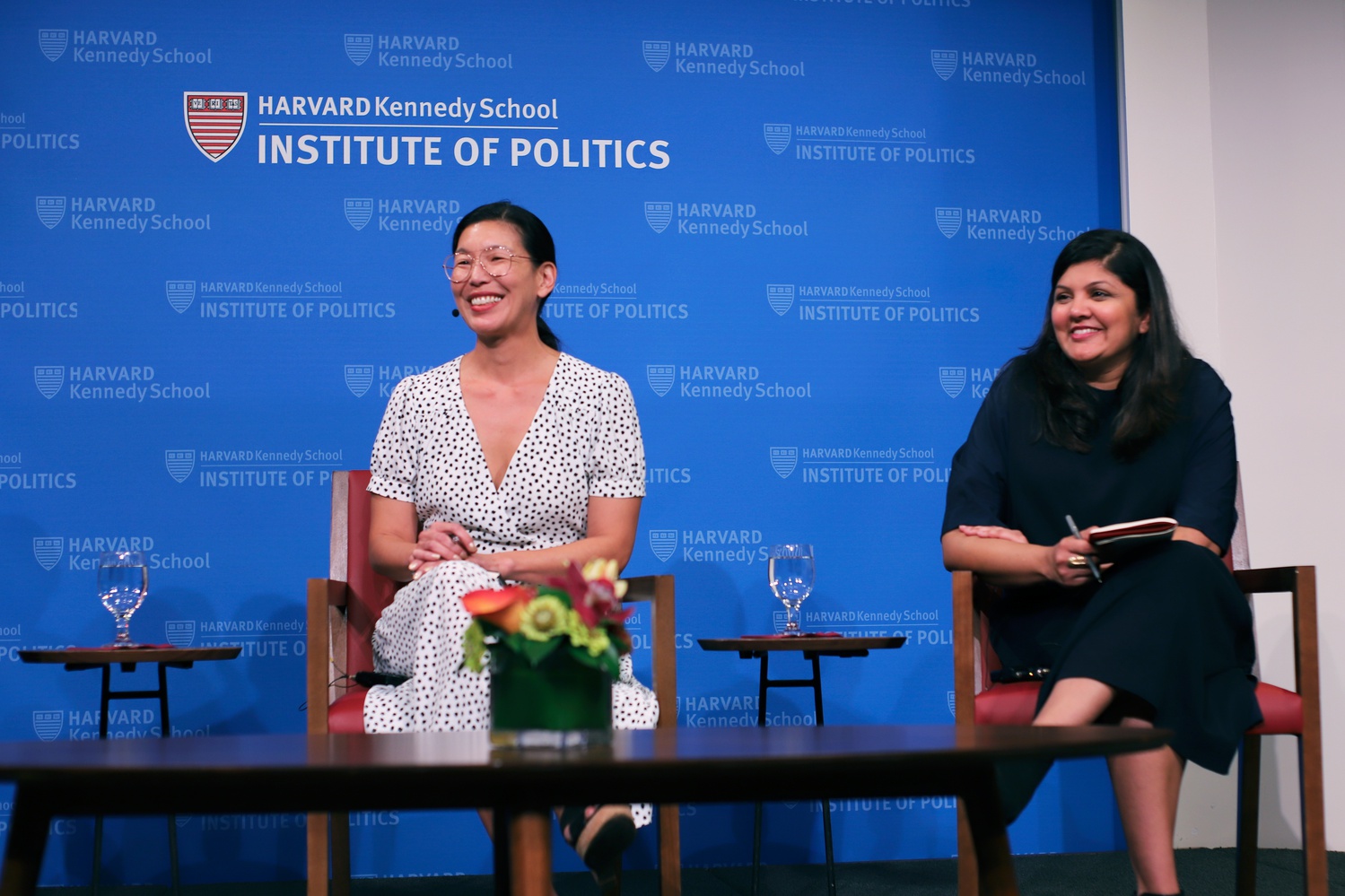 Brittany Butler, the executive director of the Social Innovation and Change Initiative at the Harvard Kennedy School moderated a discussion between Ai-Jen Poo, left, the co-founder and executive director of the National Domestic Workers Alliance, and Palak Shah, right, the founding director and social innovation lab director at NDWA. Poo and Shah discussed domestic work as the original "gig economy" and talked about the importance of intersectionality. By Camille G. Caldera
By James S. Bikales, Crimson Staff Writer

Leaders from the National Domestic Workers Alliance discussed the importance of domestic workers’ contributions to the future of the labor movement at an Institute of Politics event Monday evening.

Ai-jen Poo, co-founder and executive director of NDWA, and Palak Shah, the group’s social innovations director, spoke at the event, titled “The Future of the American Labor Movement.” Brittany Butler, executive director of the Kennedy School’s Social Innovation and Change Initiative, moderated the conversation, which covered topics ranging from workers’ rights to intersectionality.

The Poo and Shah started by connecting issues facing domestic workers to the labor force as a whole. Legally, domestic workers cannot unionize or bargain, but Poo helped found NDWA in 2007 to advocate for their labor protections.

Domestic workers — who are largely women and people of color — hold up society “behind the scenes” as nannies, house cleaners and caretakers, Poo said.

“It’s so important, and yet it is some of the most vulnerable and undervalued work in our entire economy,” she said. “The overwhelming number of workers are working in poverty or on the brink of poverty, without access to a safety net, without benefits, without job security, without a path to career advancement.”

Shah said that domestic workers are particularly equipped to be leaders in the labor movement going forward because more laborers are facing conditions domestic workers have experienced for decades.

“In many ways, people are looking to domestic workers as the original gig workers for guidance and leadership around, ‘Well, you all have been living in these kind of precarious conditions for generations, what's the way forward?’” Shah said.

Poo highlighted how NDWA’s position at the convergence of various movements — including ones concerning worker’s rights, immigration, and gender equality — makes it essential to evaluate their work through an intersectional lens and offers an opportunity for innovation in organizing.

Estela Lacombe Franca ’23, who attended the talk, said she was particularly passionate about the type of work Poo and Shah were undertaking.

“I am especially interested in the intersection between immigration and different aspects of people's identities and their role in the domestic labor movement,” Franca said. “Their approach towards reconciling that with their advances in both policy and reception of domestic workers was absolutely fascinating and extremely necessary.”

“As political leaders, we can have great policy ideas in a vacuum, but they have to stand the test of popular support and political will,” she said. “Thinking about a strategy of policy change combined with cultural change could open the space for new policies.”