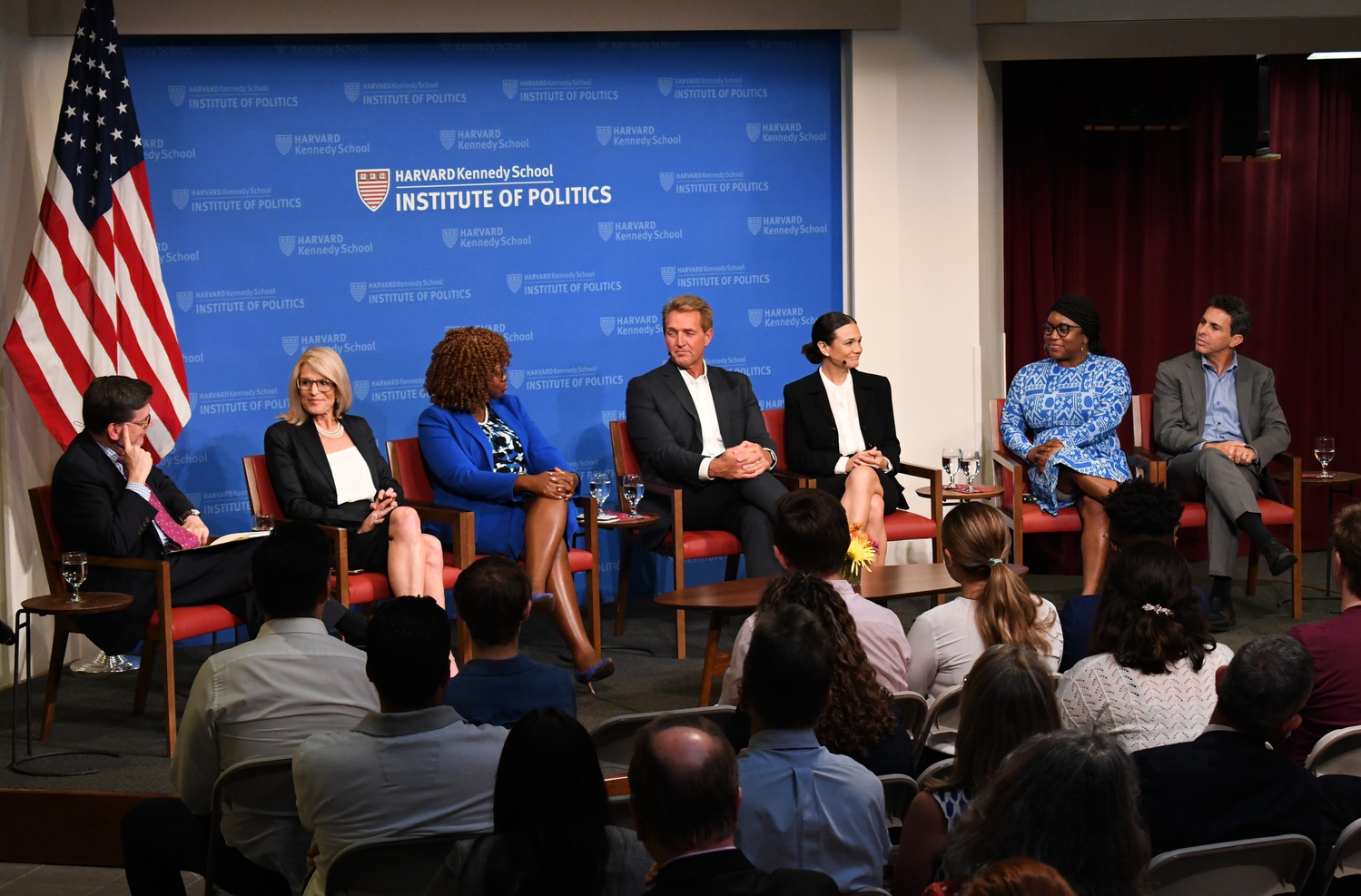 Current IOP Fellows discuss the role they have played in politics and how their experiences have contributed to the journey towards attaining their fellowships. By Naomi S. Castellon-Perez
By Camille G. Caldera, Crimson Staff Writer

Harvard’s Institute of Politics’ new class of resident fellows engaged in a lively conversation about civic life and bipartisanship on Wednesday evening to kick off a semester of study groups and events the fellows hold for students.

Former Senator Jeff Flake (R-Ariz.), kicked off the forum by recounting his lifetime of expeditions to remote islands with no food, water, or tools. He said he took one such trip with fellow Senator Martin Heinrich (D-NM) and nothing but a machete, “to prove that Republicans and Democrats can get along.”

Flake’s anecdote set the stage for an evening of conversation about pursuing civility and bipartisanship in politics and public service.

Bob Cohn, the former president of the Atlantic, offered commentary on the state of the journalism industry.

“The industry itself — and journalists in particular — are under profound attack from this administration,” he said.

Alice Stewart, a former Republican campaign communications director and commentator on CNN, shared her experience being called out on Twitter by President Donald Trump less than 24 hours before the forum.

“Thank you for the nice words while on @CNN concerning the TWO big Republican Congressional victories,” he tweeted. “You’d be great on a network with much higher ratings. Keep up the good work!”

Later in the forum, Flake said that he hopes politics will return to an earlier era when respect and civility toward members of the opposite party was commonplace.

In response, LaTosha Brown, the co-founder of the Black Votes Matter Fund, burst into song. “We who believe in freedom cannot rest, cannot rest until it comes,” she sang.

“I absolutely 1,000 percent disagree with [Flake’s] position. I think the goal is never to backwards. It’s actually to go forward,” she said, following the song. “The goal isn't to retreat and fear and go back to a place of safety, because what was safe for some has not been safe for me."

After the event, forum attendees called the exchange exemplary of the forum’s values.

“It was done in a very bipartisan, conversational way,” said Katherine A. Krolicki ’20, one of the co-chairs of the Fellows and Study Groups program. “That's the essence of this program and seeing those two very, very different voices come together and have these conversations and understand, that is what this program is about.”

Michael A. C. Hla ’23 said the fellows are role models for his generation.

“I think all of these fellows really believed in bipartisanship rather than hostility,” Hla said.

The forum also included a conversation about the different routes to politics and public service. For example, Deesha Dyer, an Obama administration Social Secretary, discussed how she went from dropping out of college at 18 to holding a senior staff position in the White House.

Deyer said she will focus her study group, titled "Imposter to Impact," on people like her “who had a very unconventional journey into politics.”