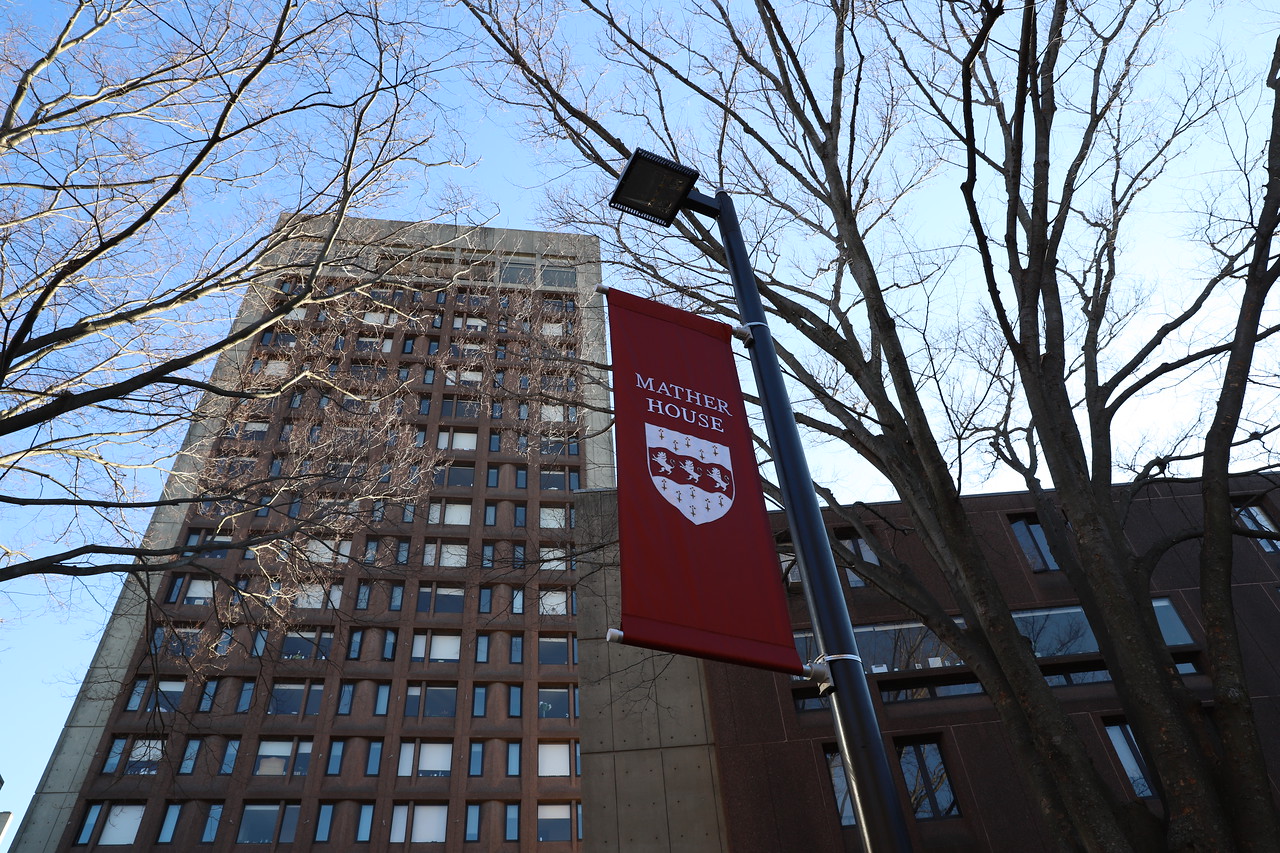 Eventually, Bakshi heard a voice for “the first time in forever.” God? The ghost of Increase Mather? The Taco Nacho Salad Odor brought to life? No: the elevator’s telecom system. (When we press about the duration of “forever,” Bakshi clarifies that it had in fact been only 20 minutes.) The voice belonged to a serviceman who said, “We’ll have somebody come over to you right now.”
By Kevin Lin and Grace R. O'Sullivan

Yousuf A. M. Bakshi ’23 spent his Saturday night trapped in the elevator of Mather Tower. Having just finished a midterm paper, and needing a break before starting in on another, he decided to meet a few friends in Mather Courtyard. He grabbed his coat, left his dorm, and entered the Tower elevator. The doors closed. And then: nothing. He was stuck.

The Mather Tower elevator, for the unacquainted, has gray padding, a lingering scent of HUDS Taco Nacho Salad that comes from the trash can inexplicably placed in its corner, and an emergency phone that plays soft jazz as its hold music. (“I have an emergency. Why would the emergency button play elevator jazz music?” Bakshi questions.) For most people, a night spent in an elevator — especially this elevator — would be something akin to torture. Bakshi, though, claims that a night stuck in the elevator of Mather Tower turned out to be just what he needed. That metal box became something of a getaway, a good place for a mini vacation.

When the doors didn’t open, Bakshi’s first instinct was to call his suitemate. We should acknowledge, perhaps, that one of the writers of this story is Bakshi’s suitemate. But while trying to reach his knight in shining armor (yours truly), he ran into some trouble: “I pulled out my phone. And there’s no service, no WiFi, no data,” Bakshi says. It’s a veritable Gen Z nightmare. After a few seconds though, he walks back his claim; there actually was service, but it was only in this “one sweet spot in the top-left-hand corner.” Bakshi stood on his tiptoes, waving his phone in the air, desperate for cell service. He simultaneously pressed the middle finger of his other hand on the red emergency button and his index finger on “the siren” button for help. E.T. phoning home, if you will, by all methods at his disposal. “This was going to be an interesting ride,” Bakshi recalls. “Ride” is of course an interesting word to choose given that the thing about a stuck elevator is that, well, it doesn’t move.

Eventually, Bakshi heard a voice for “the first time in forever.” God? The ghost of Increase Mather? The Taco Nacho Salad Odor brought to life? No: the elevator’s telecom system. (When we press about the duration of “forever,” Bakshi clarifies that it had in fact been only 20 minutes.) The voice belonged to a serviceman who said, “We’ll have somebody come over to you right now.”

“Right now” turned out to be more like two hours. Bakshi waited and waited and even asked his blockmate to come to the hallway and wait outside the elevator doors. A set of metal, an Iron Curtain of sorts, divided the two friends. Bakshi said to his blockmate, “I need somebody to be with me in this unfortunate time.”

But it’s unclear how unfortunate his time in the elevator was at all. When the security guards and HUPD officer finally did arrive, their concern for Yousuf’s wellbeing, hunger, thirst, and bowels was unnecessary. Bakshi was fine: He was streaming Ariana Grande’s recently released single “Positions” on repeat and shooting TikToks a cappella.

“Not gonna lie, the padding on the side was very comfortable. I was contemplating, ‘I might not make it out tonight. I might as well just make myself comfy.’ And I actually did,” Bakshi recalls. He took a nap for ten minutes on the floor.

An hour and a half into the ordeal, the contracted elevator repairman finally arrived. He jimmied the elevator door open to reveal Bakshi sprawled on the floor — looking, paradoxically, both serene and scared out of his mind. Upon feeling the elevator move, he braced himself for a potential drop, and while the elevator didn’t, he could have, while getting out. In addition to Bakshi, the door had revealed a dark drop into absolute nothingness below him.

As the “elevator repairman” positioned the ladder, “one of the legs went down the shaft. Then they picked it back up,” says Bakshi.
While Bakshi processes the prospect of slipping and plummeting into the void, the adults remind him, “You're gonna have to do this yourself,” Bakshi steps down one rung and frantically leaps to safety.

After finally escaping from Mather Tower’s authoritarian steel cage, Bakshi remembers his first moments: “I didn’t know what to do and you know how when the plane lands and you don't know what to do and so people start clapping? I just started clapping.”
It was a bittersweet moment. Sure, he was stuck in an elevator on a Saturday night for two hours, but a metal limbo was just what he needed — a perfect break from reality. “I was having a bloody stressful week —” Bakshi, we should add, is quite British, “and this just made me realize I’m stressing over nothing,” he says. He’s also something of a philosopher, apparently. “Like, sometimes life could just be as simple as four walls.”