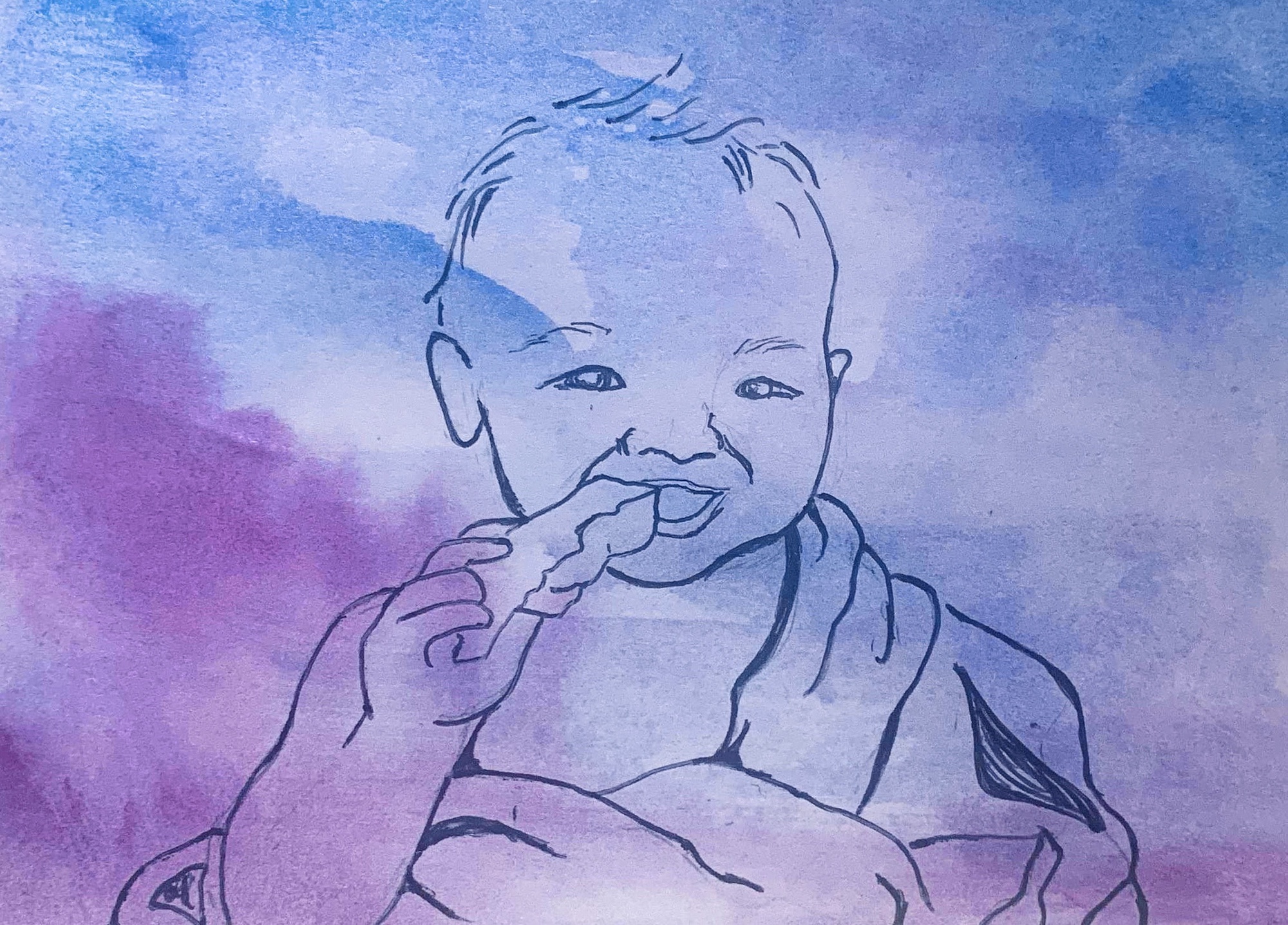 Contemporary Romance: My Sister by the Sea

No matter the age, or how many times she choked on the sea, she was always babbling, giggling, and shrieking; despite purple, chattering lips, she never admitted to being cold.
By Matteo N. Wong

My mental image of Martina, my younger sister by eight years, is of a photo in my father’s study: a chubby-cheeked toddler, mostly bald but with wisps of brown hair, wrapped in a blue towel and sitting on a green beach chair in northern Italy munching on a slice of focaccia.

We used to visit Italy every summer. When Martina was four, our beach game was “shark”: I swam toward her, my fingers rising from the surface like a fin, and she shrieked and ran away, splashing through the foam where the pebbly Ligurian shore meets the Mediterranean. The next year she devised a new game, in which we held hands in the water and danced in a circle, singing the lyrics to “Snoopy Come Home” from the Peanuts television special.

When she was a more adept swimmer, we returned to “shark,” but in deeper waters. Soon after she became obsessed with water acrobatics, and she’d have me toss her out of the water as she attempted to contort and spin her body like the synchronized swimmers she saw in the Olympics.

No matter the age, or how many times she choked on the sea, she was always babbling, giggling, and shrieking; despite purple, chattering lips, she never admitted to being cold. It was as if she were competing with the crashing waves for who could make more sound, for longer.

Martina and I are products of the same genetic jumble. At home, we ate cantonese noodles and shumai; pasta pesto and ravioli; a burger with fries; and on leftover night, all of the above. Outside the home, I was a ship caught between two shores, the buffeting of heavy winds making both impossible to reach. I heard the term “halfie” for the first time in high school, a teacher called me “mutt,” classmates doubted my authenticity as someone with “Chinese” heritage who could speak Italian. Yet for Martina, in her unencumbered, elementary school state, the puzzle pieces fit together seamlessly. She could boast to her friends that she spoke Italian with her nonni and tried cow stomach over the weekend, existing in an organic state, absent of the identity-based worry and politics that would make a similar utterance from me immediately suspect: “You’re not really Chinese.” I could read her Italian fables, or American ones, or translated Chinese myths before bed; no matter the story’s origin, my sitting by her side and stroking her uncombed hair put Martina, and often me, to sleep.

Of course, I knew her elementary school years were not as simple they looked. At dinner I heard about bullies, fourth grade cliques, and strict teachers, and would explain how I’d overcome similar problems at her age. We also had conflict, enormous fights over trivial things — rushing her to get ready in the morning, scolding her for strewing socks all over the house. Her problems all seemed related to inexperience, and our spats were my attempts to resolve them.

In the few years before I left for college, the biggest points of contention between Martina and myself came during mealtimes. I commented on her eating habits endlessly — urging her to have her fill, asking if she’d eaten enough, scolding her to finish her plate. As I struggled with body dysmorphia, I sometimes went through weeks-long periods of unfinished breakfasts and skipped lunches, in order to justify an average-sized dinner. I weighed myself daily, spread level tablespoons of peanut butter, measured precise scoops of rice; Martina ate goldfish from the bag, snacking when she was hungry and setting her fork down at meals when she was full, unaware of “macronutrients” or caloric content.

I’d stand in our living room, watching her munch on Cheerios while tackling multiplication problems and chiming in when she needed help. I was relieved at her natural relationship with food. If she wanted to bake, I’d happily pull out a recipe for chocolate chip cookies. As we baked, I’d willingly clean up her mess — eggwhite on the counter, flour on her sweater, shells in the batter — and even eat our finished product, pride in our joint baking effort outweighing my fear of simple carbohydrates.

Yet at meals I was so overbearing, and we bickered so much, that my parents changed our seating arrangement so that I wouldn’t be directly across from her. I projected my own insecurities onto Martina, my fear of eating too much paradoxically expressing itself as concern about her eating too little.

In retrospect, I remember Martina yelling at me to stop pushing her to eat, setting down her utensils in refusal, at times even crying. Yet within a few days of each fight, it seemed like she had bounced back, impervious to my nagging, so I continued. In trying to protect Martina from my self-induced starvation and binges, to preserve my image of her simple, unified state, I had overcomplicated everything; it now feels selfish.

I returned home this winter to a tight embrace from an unruly 11-year-old, her head nearly up to my shoulder. Martina now has thick, long brown hair and her forehead brims with proto-pimples. TikTok is always open on her phone and my mother’s oversized jeans and sweaters fill her wardrobe (for the “thrift shop” aesthetic).

She demands to be taken to the Women’s March; is reading a novel in which police brutality is a central theme; wants to explore her Chinese heritage, preparing Trader Joe’s dumplings for lunch and trying to pick up Mandarin through Duolingo. She is learning to cook and made me pancakes for breakfast; she recounted how she had, of her own accord, broken off toxic elementary school friendships and forged new ones; “Wasian” is a fixture in her vocabulary, and when an eighth grader made fun of her for having coronavirus she shouted at him until he apologized.

Spending months away from home at a time means when I see her now, the changes — in her height, demeanor, speech — are sudden and jarring, forcing me to recognize her as her own subject with interests and thoughts beyond what I might project upon her.
When she asked me what it was like to transition from a middle school with no Asians to a high school filled with Asians, about what it was like to study Mandarin and speak with Nai Nai and Gong Gong, I didn’t have any clear answers.

Martina is beginning to go through puberty and adolescence, as all sixth graders do. Yet this simple, inevitable fact feels impossible. Like standing on the shore, aware only of the white crests gently slapping your ankles, the murmuring waves and summer sun lulling your senses; but all the while the tide draws the seawater back, gentle eddies around your soles pulling the sand beneath your feet along with the water, until you suddenly fall forward, to find that the ground beneath your feet, inexplicably, has literally been swept away.

Martina’s straightforward way of navigating the world gave me something to return to, not only a physical person and space, but a temporality, one outside my teenage, inexorable march through inner challenges and uncertainties.

A few days before I returned to Harvard this past August, my father, sister, and I went to the beach, as we always do. There is something about the sea — perhaps the rhythmic crashing drowns out worry, or the salinity buoys innocence to the surface, or the air is so saturated with nostalgia that there’s no room for excessive brooding, or the cyclic tide smooths over sharp edges — that returns Martina to a younger state. Here she has infinite resistance to the cold, shrieks gleefully at sea-foam sprays, is intensely averse to sand. Always either in the water or sprawled on a towel, munching on potato chips.

Martina is still 11 years old. Our conversations about her bizarre dreams, staring contests (she can’t keep from giggling for longer than two seconds), time spent cuddling together with the dog, the basic things I have to teach her (how to make instant ramen, how to use blinds), outnumber the moments in which her maturity surprises me. Childhood in twilight.

She runs into the water and, whenever a large wave approaches frantically screams “Big! Big! Big!” The wave arrives before she can prepare herself, and the Atlantic fills her mouth.

—Magazine writer Matteo N. Wong can be reached at matteo.wong@thecrimson.com. Follow him on Twitter @matteo_wong. This is one of three essays published as part of FM’s 2020 “Contemporary Romance” feature.