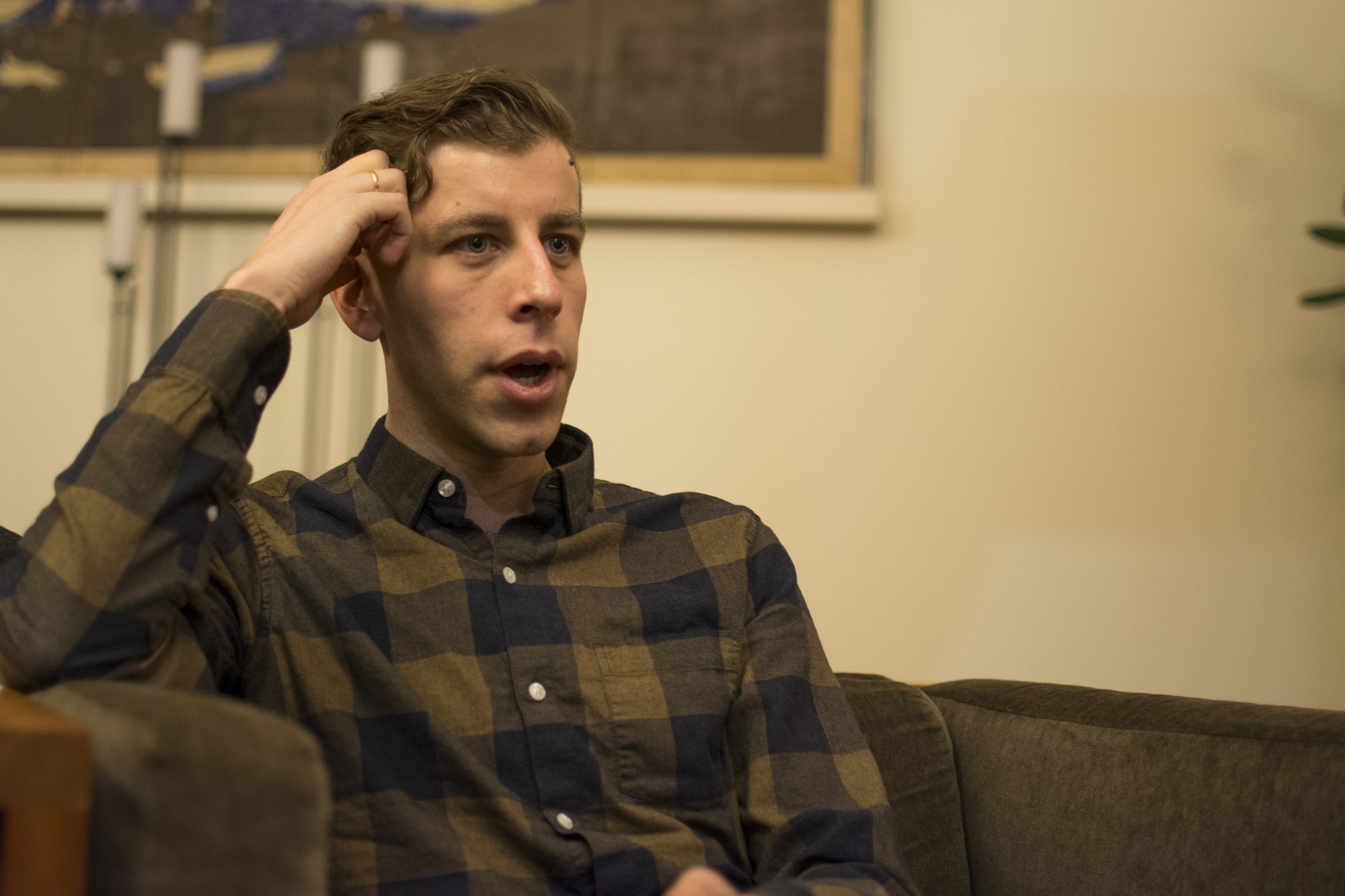 David Jud is a resident tutor at Mather House. Together with Harvard chaplain Adam L. Dyer, he founded “The Masc”, the first organization on campus created to discuss and address questions about masculinity.
Advertisement
Advertisement

To Be a Harvard Man

Based in Mather House, “The Masc” seeks to provide a space for undergraduates to address questions about masculinity at Harvard. Founded by Mather House tutor David Jud and Unitarian Universalist Harvard chaplain Adam L. Dyer, “The Masc,” to Jud’s knowledge, is the first organization on campus created exclusively to explore masculinity, both in the context of Harvard and beyond.
By Mollie S. Ames 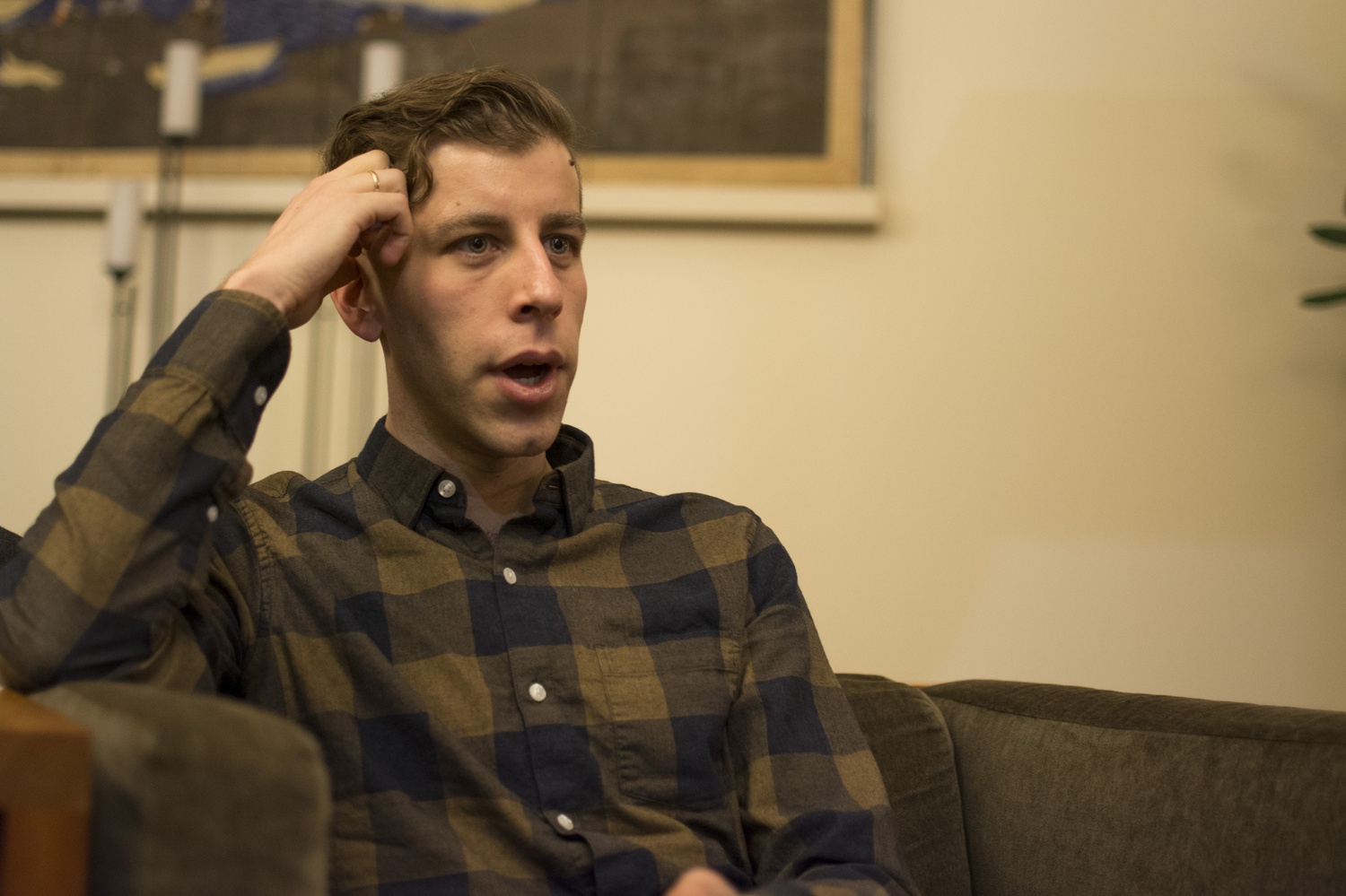 David Jud is a resident tutor at Mather House. Together with Harvard chaplain Adam L. Dyer, he founded “The Masc”, the first organization on campus created to discuss and address questions about masculinity. By Thomas Maisonneuve

Twenty-six years before John F. Kennedy ’40 became the 35th president of the United States, he did what all Harvard students have done: he applied. Well, sort of.

His five sentence application essay touts the value of a “liberal education” and vaguely claims that Harvard has “something definite to offer.” But, to conclude, he makes a kind of generational appeal:

“Then too, I would like to go to the same college as my father,” Kennedy writes. “To be a ‘Harvard man’ is an enviable distinction, and one that I sincerely hope I shall attain.”

But what does it mean, really, to be a “Harvard Man” today?

Based in Mather House, “The Masc” seeks to provide a space for undergraduates to address this question. Founded by Mather House tutor David Jud and Unitarian Universalist Harvard chaplain Adam L. Dyer, “The Masc,” to Jud’s knowledge, is the first organization on campus created exclusively to explore masculinity, both in the context of Harvard and beyond.

Jud was inspired to start this group after participating in a similar program while earning his masters degree at Syracuse University. He then recruited Dyer, who has been leading conversations about issues of masculinity and sexuality since as early as the 1980s.
Jud says that one barrier to the club’s success is also the reason it exists.

“In general, men, male students, male-identifying folks don’t talk a whole lot about their feelings, about their experiences growing up, what it means to be a man, how [they are] questioned in their gender or sexual identity at various points in their life, how they may have done harm to others by reinforcing gender norms,” Jud explains. 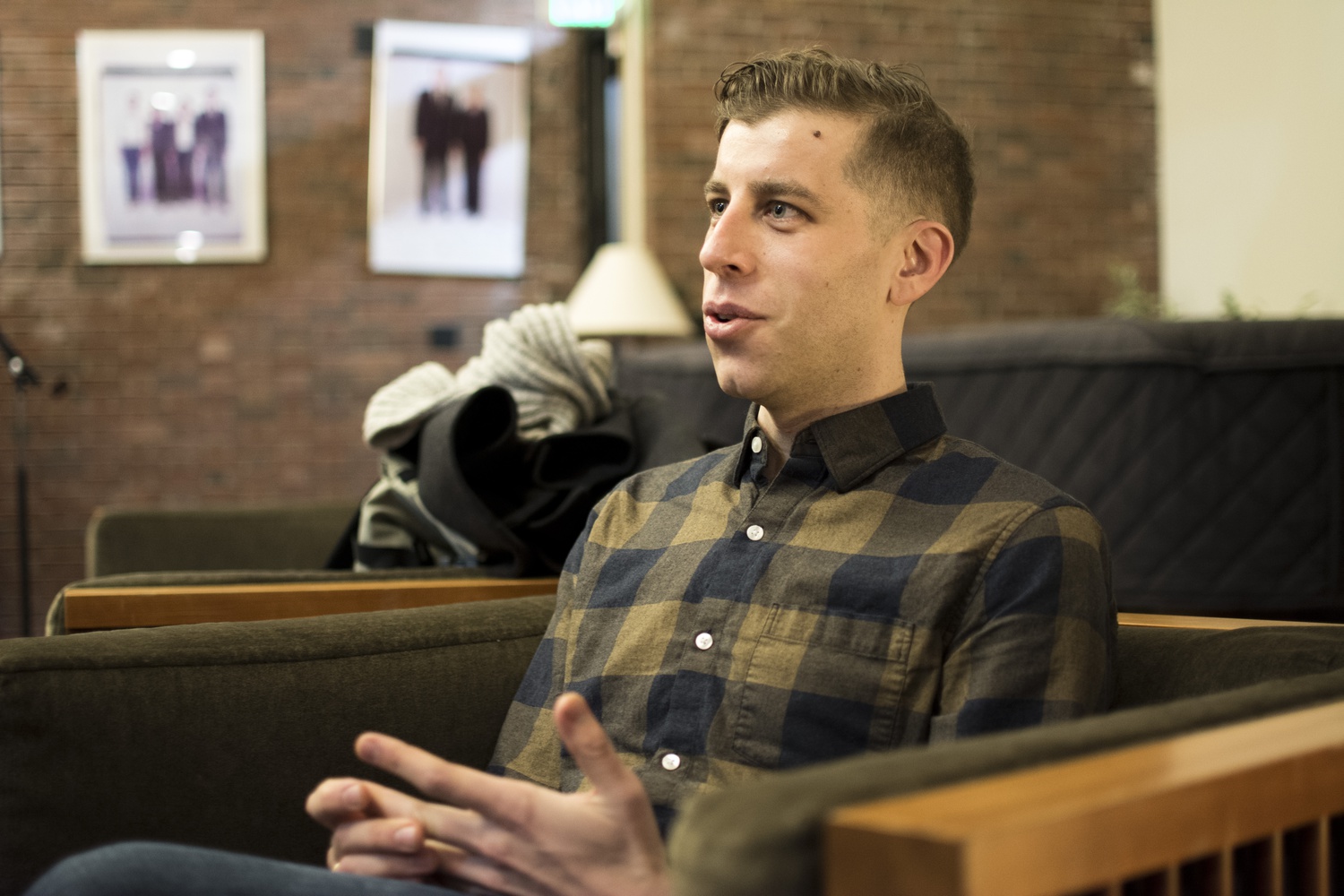 Jud says that his goal is to provide a space to “share stories” and allow everyone's experiences to exist. By Thomas Maisonneuve

Part of the problem seems to be exacerbated by Harvard’s culture. Dyer mentions that many consider “over-programmed time” to be just a “Harvard thing,” unrelated to masculinity. But, he adds, “A lack of spaciousness is something you see time and again when you look at gender studies. You know, having too much is a sign of good masculinity. Like, I can do everything and more is considered classic male behavior.”

Office of Sexual Assault Prevention and Response (OSAPR) director Pierre R. Berastain ’10 does not consider prioritizing work to be a “masculine thing,” but says that trying to prove one’s worth through involvement is both a “Harvard thing” and a form of capitalism and patriarchy. Although not associated with “The Masc,” Berastain has partnered with Dyer in the past to address masculinity at Harvard.

While “The Masc” could be a “more academic” organization that “[uses] a lot of abstract terms like intersectionality and heteronormativity and basically [is] like section,” what Jud really wants is to provide a space to “share stories” and allow everyone’s experiences to exist.

Last week, for the first time, Jud, Dyer, and eight new student members gathered in the Mather Senior Common Room and dove into a curriculum invented for a similar group at Brown University.

The first meeting used structured activities to get students to consider different gender identities, writing adjectives associated with each on a whiteboard. Jud and Dyer then asked participants to enter an open conversation about times they either reinforced gender norms or acted as a bystander to gender stereotyping.

The group itself still seems to be mulling over its audience and scope. The College requires that all student organizations remain open to all people, regardless of gender identity.

Berastain believes that a space to unpack masculinity does not require that all attendees are male-identifying because “we all have levels of masculinity and femininity.”

“What are you trying to achieve with a male-only space that would be different when you have a female presence in the room?” he asks. “What are you unwilling to say? And more importantly, why?”

Dyer lauds the work of the Office of BGLTQ Student Life and the Harvard College Women’s Center, but he believes there should be private spaces where men at Harvard do not have to fear being “pre-judged”: “So the flip side then is where is the space for men?” he asks. “Where does the male-identified person with quote unquote ‘traditional’ masculinity values, where does he get to talk about what he feels?”

Dyer hopes to bring together those with different beliefes about masculinity “to actually talk to each other or have a space where they can hear each other without judgment.”

According to Dyer, the “uber-liberal” nature of Harvard and Cambridge makes it difficult to ensure that those with conservative views about masculinity do not feel judged. A self-proclaimed “liberal,” Dyer still hopes that he can create the “sense of openness” he found valuable when “navigating very conservative religious circles” in the past.

For their first meeting, I asked if I could come to observe the discussion. But Jud explained that he believed the presence of a reporter might intrude upon the “somewhat confidential space” and prevent students from sharing openly.

“The Masc” will confront not only overarching questions about masculinity, but also the growing problem of sexual assault at Harvard. Dyer was stunned by last year’s survey on sexual assault and misconduct from the Association of American Universities (AAU) and is committed to finding concrete ways to deal with the results.

Berastain suggests that spaces that address masculinity can approach sexual assault in several ways. He highlights the potential in “unpacking our own histories of harm” that may affect future relationship s and “creating a group of collegiality and camaraderie in which people hold each other accountable, in which people help each other grow and look out for each other.”

The issue of sexual assault committed by men from Harvard does not stop at the bounds of Harvard’s gates. Conversations with students from other universities including Lesley, MIT, Longy, and Berklee reveal, in Dyer’s words, “That there’s a history of Harvard men assaulting people on other campuses or feeling entitled to have privilege with other people’s bodies because they’re not ‘Harvard.’”

Jud also believes that Harvard’s influence gives a particular weight to the work of “The Masc.”

“For better or worse, Harvard students will grow into very powerful positions in the world, and, you know, if not Harvard, then where else are you going to set the norms of tomorrow?”

Change won’t necessarily happen tomorrow, but Jud and Dyer are thinking long-term. “We hope that people who take leadership roles in this room today will help people redefine what masculinity means in 10, 20, 30 years from now, in society and, if not in society, then at least within their own families and private networks,” Jud says.

Dyer looks forward to when students ultimately take it upon themselves to sustain “The Masc.” Beyond that, he hopes to one day bridge Harvard organizations — from the chaplains, OSAPR, the Women’s Center, and the BGLTQ office — to form a broader campaign that tackles masculinity.

Berastain, who has discussed the idea with Dyer, similarly imagines how the different groups on campus could come together to explore more “collaborative and in-coalition type work.” He believes that “you are just much stronger if you are coordinating and trying to work through that decentralization.”

So, while Dyer is hesitant to claim a slogan for such a campus-wide campaign at the moment, one came to mind first: “Harvard man, question mark?”