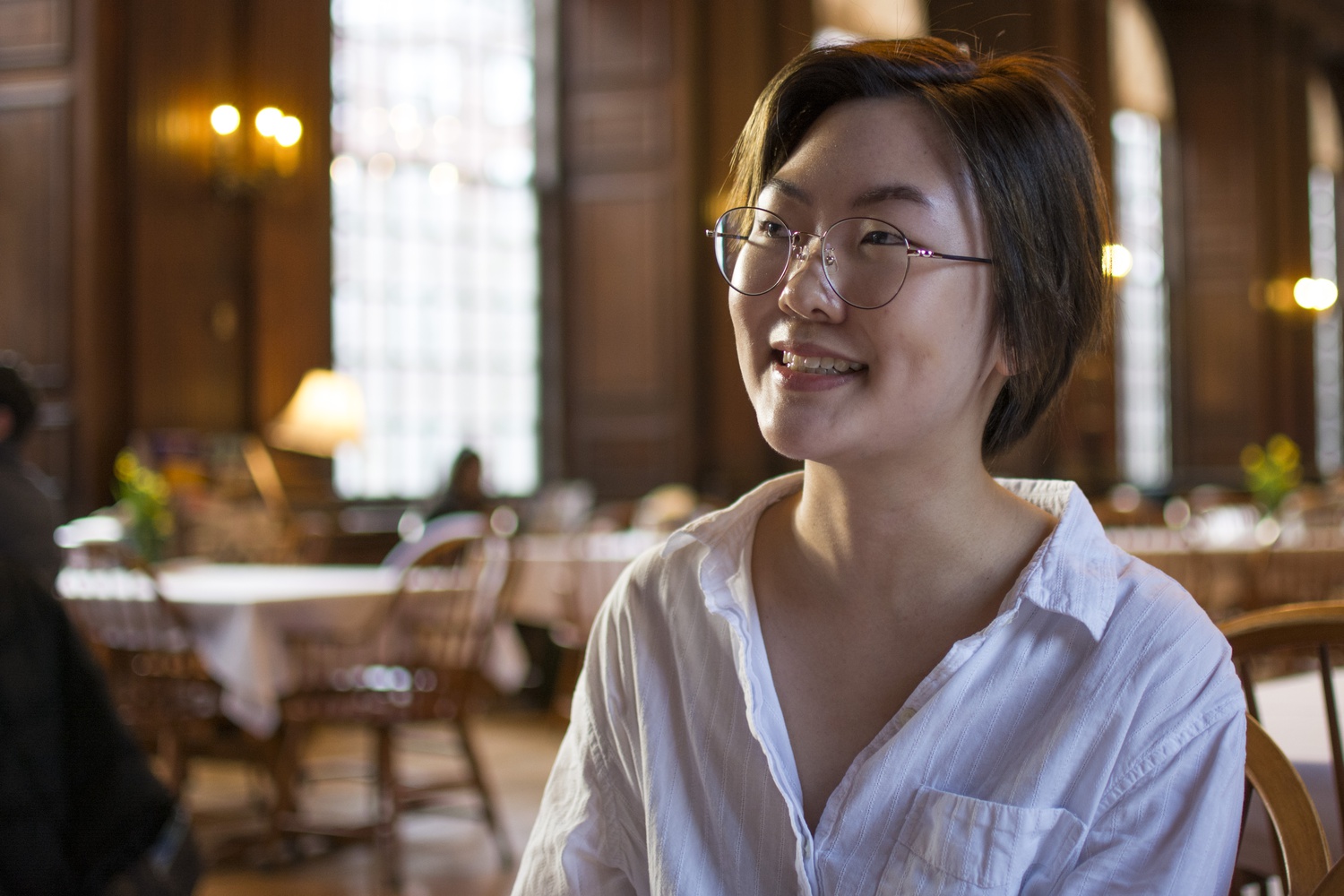 “It feels kind of like people can see you without your clothes on,” says Changie Yuri ’20 as they sit in the afternoon glow of Eliot dining hall during the lull between lunch and dinner.

They are referring to a slim book sitting on the table before them. Its stark white cover is emblazoned with the title “Dear Sarah,” in black ink. And while Yuri happens to be bundled up for this bitterly cold Thursday, the feeling of nakedness they describe makes a lot of sense. "Dear Sarah," Yuri’s self-published collection of “poetry/prose,” bares it all, exploring their “feelings and experiences of mental health, queerness, being Korean American, trans, female, human, nonhuman,” according to its pre-order form.

"Dear Sarah," is divided into three sections based roughly on content and theme: “Phloem,” “Vascular Cambium,” and “Axillary Meristem.” These botanical titles are a nod to Yuri’s secondary concentration in biology and their fascination with plants. Succulents are a special favorite “because of their ability to regenerate even after they get all cut up.”

Yuri’s love of writing began with journaling in middle school. They wrote letters to themself which were addressed “"Dear Sarah,"” and signed “Love, Changie.” These iterations of Yuri’s legal name, Sarah Chang, allowed them to explore their nonbinary gender identity through diary entries, a project of self-exploration which is continued in "Dear Sarah,".

In many ways, "Dear Sarah," creates a space for self-expression at the intersection of genres. Yuri prefers to call the blend of poetry and prose “a collection of words.” Yuri says they don’t have much formal training, and their writing style is influenced by their background in spoken word poetry. This is evident in the sonic quality of Yuri’s poems; they write poetry as they would speak it aloud, unconventional punctuation and spelling included.

Yuri also tries to create an accessible and inclusive space for their audience. Their main reservation in publishing such personal, sensitive material is the challenge of being “honest to [their] experience without triggering [their] readers.” They seek to break the stereotypical poetic molds of sad lamentations and complex, impenetrable language to create a truth that is “as straightforward as possible.” In finding this balance, they hope to allow readers to “understand [them] a little better.” 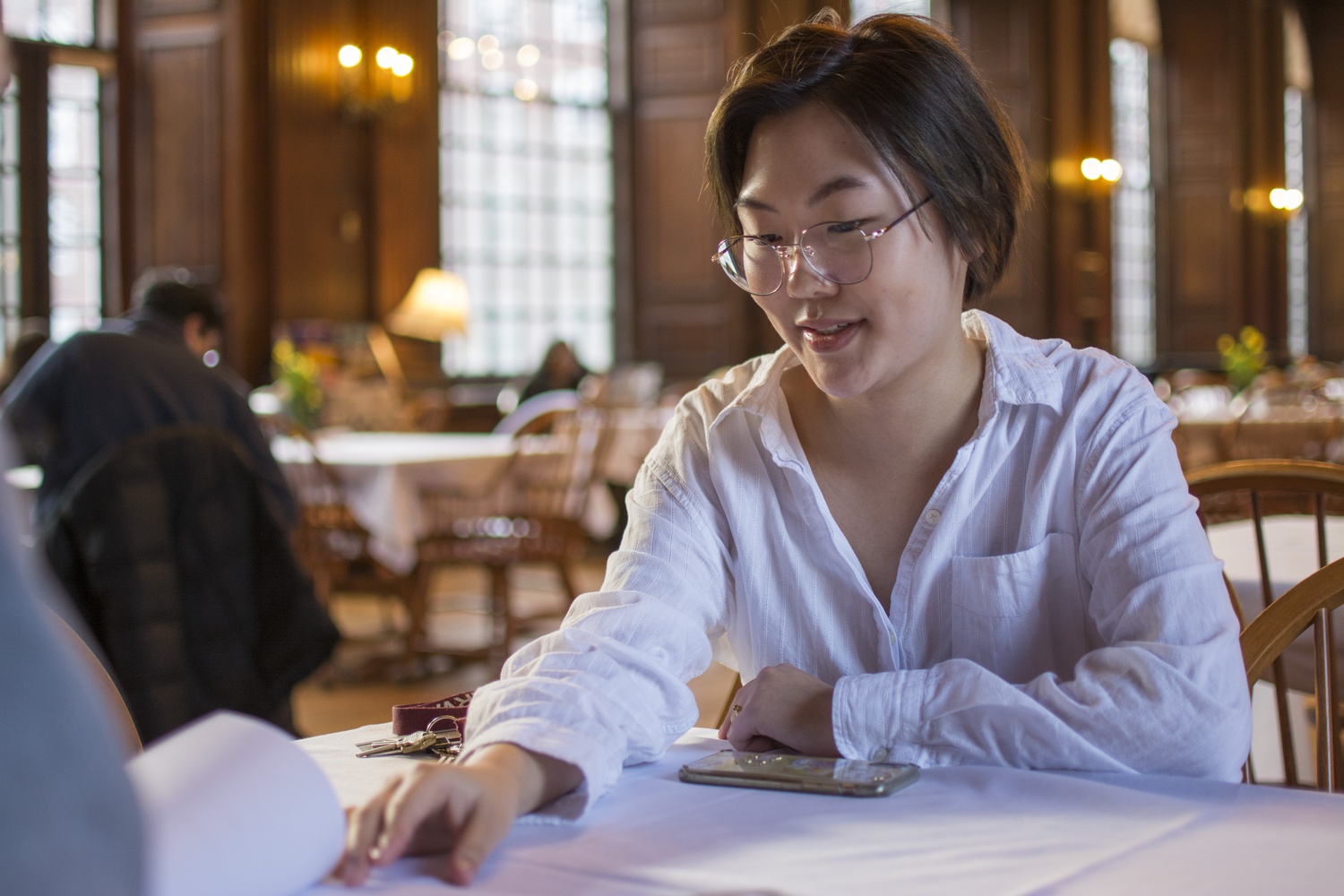 Changie Yuri '20 explains the main themes of their collection during an interview last Thursday. By Thomas Maisonneuve

Yuri describes their writing process as “banging a little out every day,” with the mindset that “this is gonna be shit, but I’m gonna type it up and see if anything is salvageable.” They compare the action of salvaging to a college senior moving out of their dorm room, sorting through what can stay and what must go in order to “pack up four years into, maybe, one collection.”

Yuri accredits much of the inspiration for "Dear Sarah," to their friend and former classmate, Mo Kim ’18. During Kim’s time at Harvard, they also published a book of poetry, donating the proceeds to a trauma center with which they were involved. In hopes of “taking that baton” from Kim, Yuri has chosen to give proceeds from "Dear Sarah," to the Trevor Project — a non-profit organization that offers crisis and suicide intervention resources to LGBTQ+ youth.

"Dear Sarah," pays homage to all versions of Yuri’s being: to the middle schooler furiously typing on “angsty Tumblr poetry blogs”; to the adult ten years from now who is difficult to envision but will probably own “maybe two dogs”; and to Yuri at present, who sits laughing at a white-clothed table, the culmination of four years spent collecting words at their fingertips.

“I think the whole purpose of the book was this idea of not rebirth, but regeneration,” says Yuri. “You don’t necessarily have to sprout an entirely new being to be new.”

— Magazine writer Roey L. Leonardi can be reached at roey.leonardi@thecrimson.com.