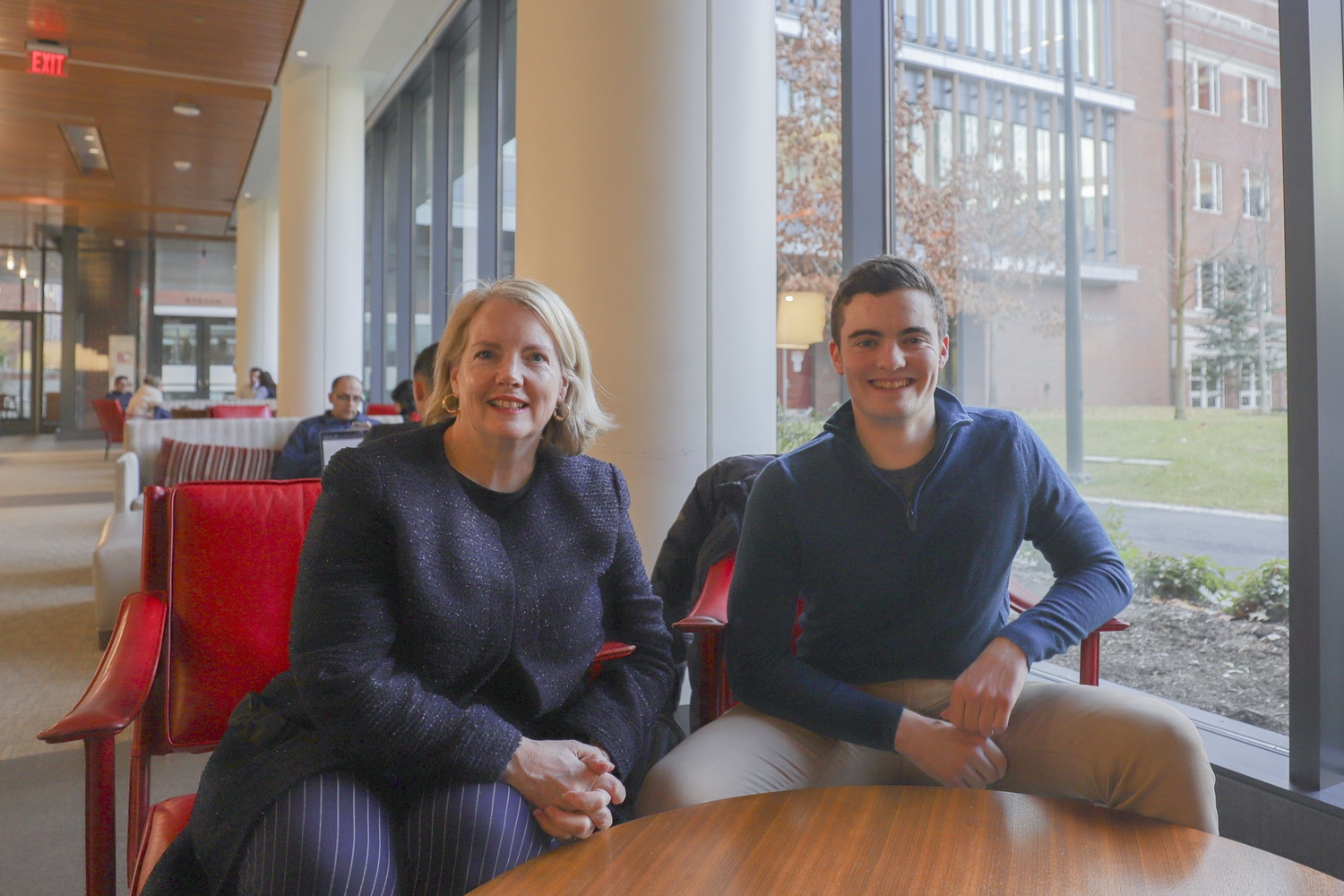 Serena B. Lese and William M. Lese ’20 are both enrolled in IGA 285: "Foreign Policy and the Utility of Military Force." By MyeongSeo Kim
Advertisement
Advertisement

Most Harvard students only see their parents on holidays and family weekends. William M. Lese '20, however, sees his mother, a Master of Public Administration candidate at the Harvard Kennedy School, at least weekly.
By Simon J. Levien

Most Harvard students only see their parents on holidays and family weekends. William M. Lese ’20, however, sees his mother, a Master of Public Administration candidate at the Harvard Kennedy School, at least weekly.

When William’s friends walked into GENED 1120: “The Political Economy of Globalization” on the first day of shopping week last fall, they realized William’s mother, Serena B. Lese, was also shopping the class.

“When I first walked into Sever, I thought, ‘Oh, this is a little strange,’” Serena recalls. “I gather that William got some texts later in the day saying: ‘Did I see, like, your mom at Sever?’”

Serena and William are the mother-son duo taking on a Harvard education, together. The pair, originally from New York City, will both graduate in the class of 2020.

“Obviously in class, she becomes a classmate,” William says. “You set aside your home relationship, and you start to engage on an academic level, which you probably haven’t done before.”

Serena says she decided to get her MPA because of what she views as the increased importance of public policy in American politics today. “I’ve always been a very engaged citizen, but I didn’t know a lot about the actual workings at the highest policy level of US and international relations,” she explains.

Serena’s decision to attend Harvard had little to do with her son being there: “If anything, I hope [my enrollment] isn’t going to be a problem,” she says. “He was really nice about it. He was like, ‘We probably won’t even see each other, so it will be fine!’”

Despite the separation between undergraduate and graduate students at Harvard, fate brought them together in IGA 285: "Foreign Policy and the Utility of Military Force," a class they are both taking this semester.

William says their Harvard experiences have intertwined outside of class, too. “[My friends] love my mom around. In fact, sometimes they want to hang out with her more than me, especially when she’s buying lunch,” William adds. “She’s integrated very well into my social life on campus.”

And even though William says their relationship hasn’t changed much since his mom enrolled this year, he also says their conversations at home have become more relevant.

“When she ask[s] me how my day was, I can specifically reference the class that we take together, and we can discuss that material, so that’s less superficial,” he says. “[It adds] more meaning to the simple asking, ‘How was your day?’”

Serena has similar sentiments: The class became a frequent conversation topic between the two of them.

“We’re just catching up, and [William] was like, ‘Well, did you do the [IGA 285] reflection yet?’” Serena recalls. “I felt so much pressure. I was like, ‘I should do the reflection already?’ Total role reversal.”

Despite having his mom on campus as an additional resource, William says that he’s never truly felt homesick.

“I was more worried about my mom being homesick, since my dad’s in New York,” he says.

Summing up his college experience, William contemplates what he values most about his Harvard education as he tackles his last semester.

“Community is why I chose Harvard. Every person I’ve met here in my senior year has been impressive, engaging, and has pushed me to want to do better,” he says.

Little did he know that his mom would be a part of that community, too.

A previous version of this article incorrectly stated that the Leses are both taking GENED 1120: “The Political Economy of Globalization." In fact, they are both taking IGA 285: "Foreign Policy and the Utility of Military Force."

—Magazine writer Simon J. Levien can be reached at simon.levien@thecrimson.com.