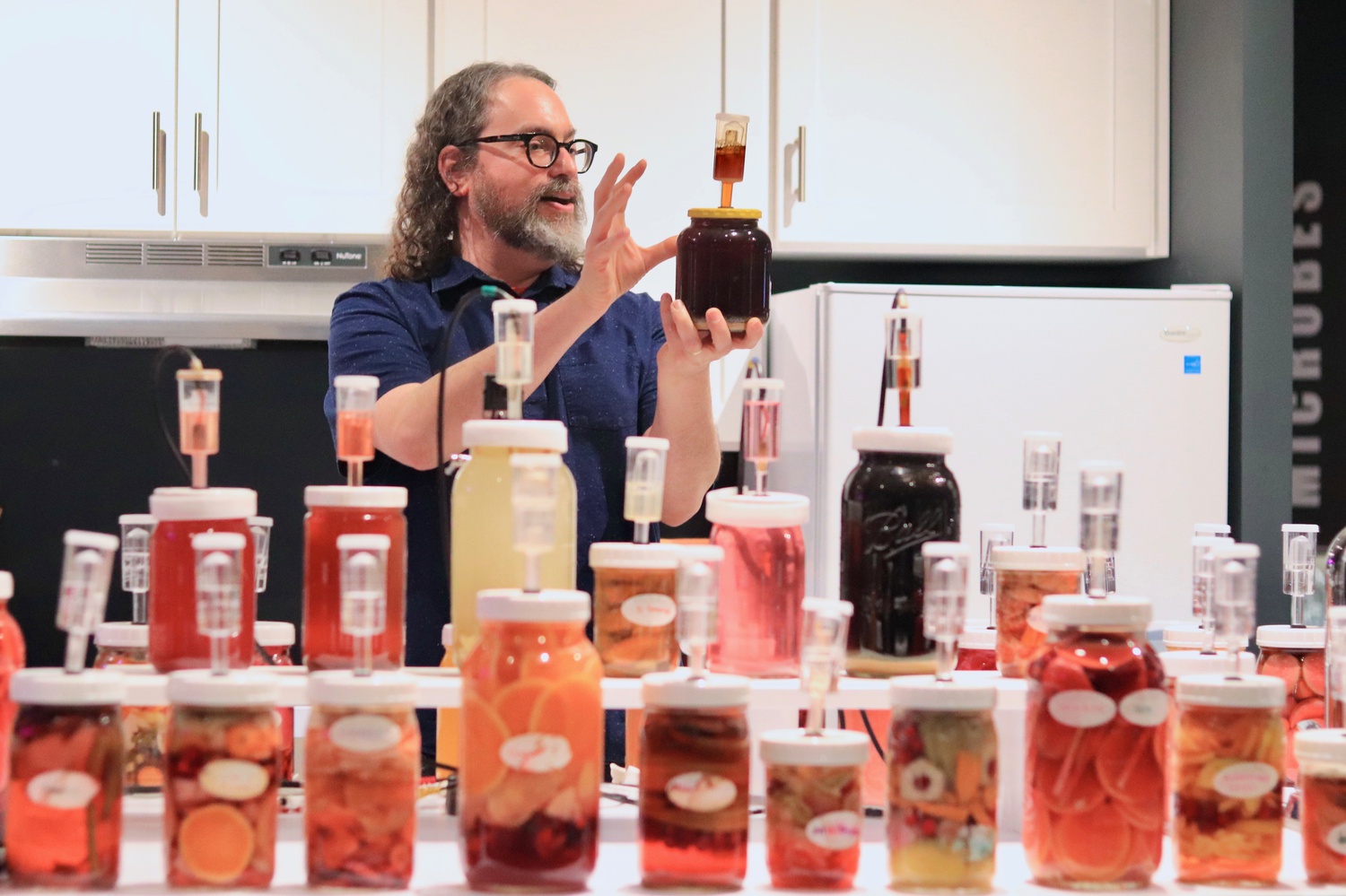 Rosenstock shows the crowd how the microbes in a jar of beer make music as part of his artist talk at the Museum of Natural History. By Kathryn S. Kuhar
Advertisement
Advertisement

"Oh my Gourd! It's the... GOURD LORD."
By Samuel D. Buckley-Bonanno

The man handing out tickets at the entrance tells me, “Just follow the music — you’ll know.”

In between the skeletal deer exhibits and the taxidermied tiger eyes that watch over the Harvard Museum of Natural History’s halls lie several bubbling jars of fruits and vegetables on a kitchen counter. They’re playing in a band.

Halfway between a mad science experiment and an ethereal concert, this colorful display of dissolving food is known as the Fermentophone — a multi-sensory art installation in which the bubbles emitted by fermenting microbes control the rhythm of a computer-generated musical performance. Once the fermenting’s done, you can even eat it.

The installation resides in the museum’s microbiology gallery, where fungal slimes and bleached tapeworms haunt the walls. Flanked by fluorescent pink lights and a floor-to-ceiling column of green goop from a local swamp, the Fermentophone and its creator, Joshua P. Rosenstock, entertain the curiosity of the surrounding crowd at this installation’s “Meet the Artist” event. Rosenstock explains to the audience that his aim is to create “serendipitous systems” by “cultivating happy accidents that have the potential to evolve themselves.”

Having already experimented with growing fungi on clothing and sprouting plants out of cell phones in previous artistic projects, Rosenstock concluded that microbes were the ideal candidates for his artistic vision. He explains that “they have their own real, tangible sense of being alive. It has this energy to it, which at times can be really almost explosive, literally.” Several jars prove him right during the performance, momentarily overflowing the containers’ lips to an accompanying climax of musical notes.
For each bubble released from a jar’s fermenting stew of locally sourced produce, a microphone picks up the sound of the escaping gas and synthesizes it into a pluck on a virtual stringed instrument, played in real-time. The chords themselves are drawn from a song Rosenstock chooses beforehand. Today’s musical offering is inspired by “Yankee Doodle,” though previous exhibitions of his piece at Harvard showcased “Fight Fiercely Harvard,” and what Rosenstock calls “the old Tom Lehrer ‘making fun of Harvard song.’ Of course, nobody could tell; it was an in-joke for myself.”

The jars themselves are not entirely Rosenstock’s creation; over the piece’s multi-year history, he has led workshops where members of the public add their own fermentation jars to the display. Though microbes quickly turn the food in the jars to mush, the creators’ intentions live on in the names scribbled on the outside, from the “Bubblenaut 3000” to “Oh my Gourd! It’s the… GOURD LORD.” Rosenstock includes these aspects to make the piece participatory and uniquely personal: “That act of titling your work becomes an important part of saying, ‘This is not just a jar of food. I’m making this my work of art.’”

In the exhibition space, onlookers discuss the work’s convergence of art and science; a few local “fermentation enthusiasts” point out how it bridges ancient practices of fermentation with the modern digital technology required to create melody from microorganism gurgling. The mysteries of the invisible creatures enthrall the audience, whether it is members of the Boston art scene contemplating “the sonification of a cyclical life force” or a pair of young siblings arguing over which jars’ contents they’d dare to eat. “So is broccoli tastier fermented?” their parents ask shortly afterwards.

Most of all, people debate who the artist is — the man who creates the machine, or the microbes that create the music. While the Fermentophone’s notes themselves never settle on a steady pattern, they are never without pattern either; if you let them, they will tempt and tease melody. On closer inspection, even one of its food-fermenting jars, titled “Dinner,” appears to portray the remains of a face rendered with Picasso-esque abstraction — then again, it may just be two peaches and a carrot.