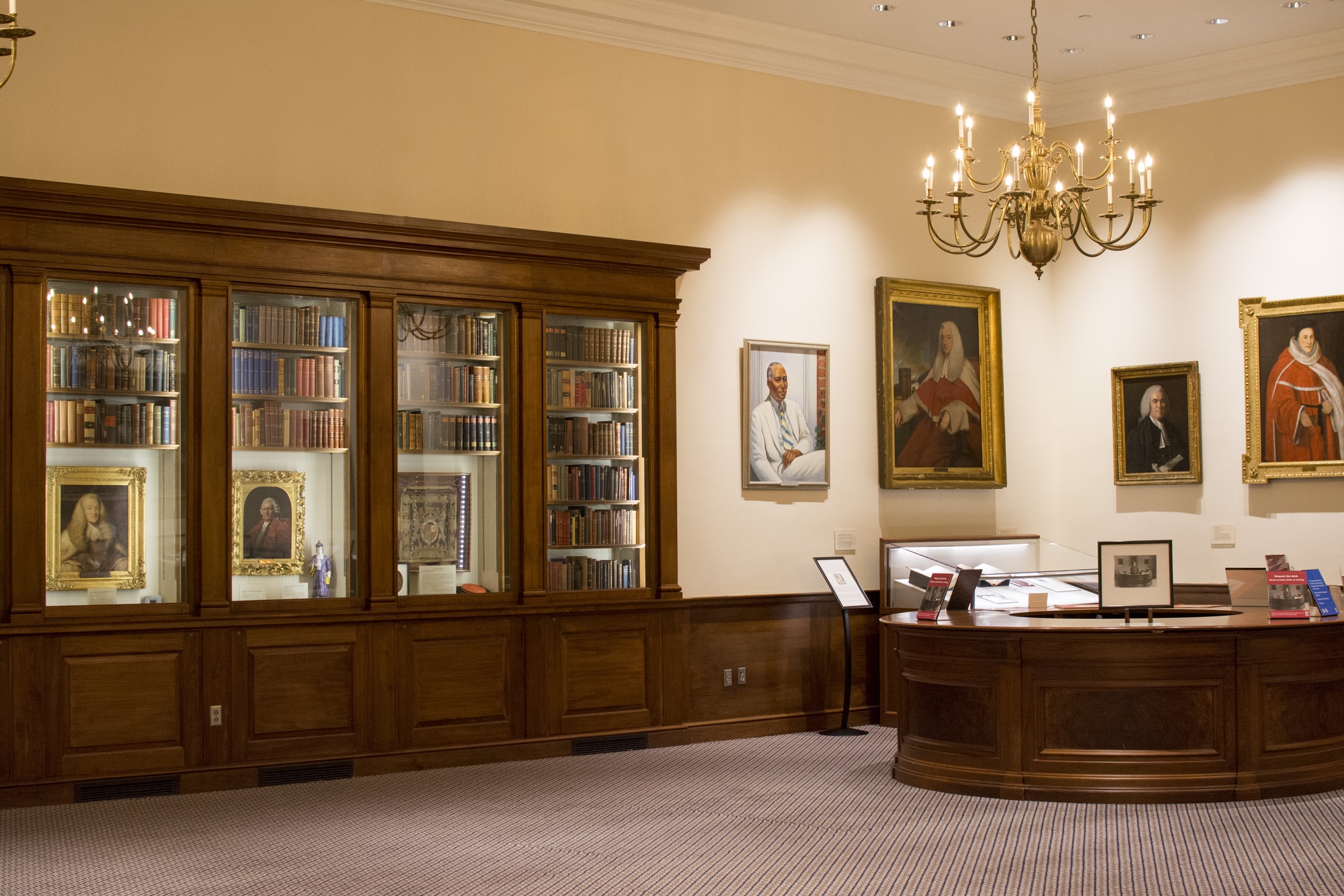 Upon the completion of the Caspersen Room's construction in 1948, the director of the library said that the room was “not to be a stationary object, but a vital, active force working for the benefit of mankind.” While initially meant to serve as a memorial to the Law School students who fought and died in the World Wars, a walk around the room today reveals Harvard’s connections to long histories of racism and injustice.
By Garrett W. O’Brien

On a cloudy March afternoon, dozens of bright-eyed, newly admitted Harvard Law School students scuttle through the main thoroughfare of the Harvard Law School Library, scanning the spaces where they will study for the next three years. Monumental pillars and regal portraits of presidents and Supreme Court justices look down on them. Slowly, the bustling procession approaches a small room with glass doors at the end of the library. This is the crown jewel of the Law School: the Caspersen Room.

Before 1995, the room was called the Treasure Room, home to the Law School’s prized fineries. The library invites visitors to gawk at the diverse set of objects that fill the room — including rare legal manuscripts, portraits, and even the first Broadway Playbill.

Upon the completion of the room’s construction in 1948, the director of the library said that the room was “not to be a stationary object, but a vital, active force working for the benefit of mankind.” While initially meant to serve as a memorial to the Law School students who fought and died in the World Wars, a walk around the room today reveals Harvard’s connections to long histories of racism and injustice.

The Royall family Crest — three bushels of wheat arranged in a triangle on a bright blue shield — towers above the room. Before 2016, the seal was the symbol of Harvard Law School. In 2016, the Harvard Corporation agreed to allow HLS to remove and replace the seal because the Royalls were a slaveholding family.

Here, in one of the most distinguished rooms on the Law School campus, is one of the only places on Harvard’s campus where the crest can still be found.

Isaac Royall Jr. provided the initial endowment to found Harvard Law School in 1817, using his family’s money generated by the lucrative trade of sugar, rum, and enslaved people in Antigua. The Royall family enslaved the highest number of people in all of mid-18th century Massachusetts; to this day, anyone can visit the slave quarters they built at their home in Medford. Isaac Royall and his father once burned 70 slaves at the stake in response to a quickly muted rebellion.

Daniel R. Coquillette, a professor of American legal history at HLS, was one of the scholars who helped to uncover the law school’s ties to the slave trade. To him, the crest’s exhibition in the Treasure Room is necessary. “We should not sweep history under the carpet,” he says.

Below the painted shield, an exhibit that explores the Royall family’s ties to enslavement explains the process of removing the shield from the Law School’s official crest. Coquillette praised Harvard Law Morgan and Helen Chu Dean John F. Manning ’82 for presenting this information in the room itself. “We cannot revoke the shield because we cannot revoke the past,” Coquillette says.

Portraits of English and American legal scholars line the walls of the room, breaking up the dense collections of books that line the cabinets. These portraits include Charles Hamilton Houston, an HLS alumnus who mentored Thurgood Marshall and has been dubbed “The Man Who Killed Jim Crow.” Perpendicular to the portrait of Hamilton is a painting of fourteen women proudly standing on the steps of the library. These women comprised HLS’s first ever graduating class of women in 1953.

In the corner, a grandfather clock shadows the bust of Finn M.W. Caspersen — the room’s namesake. There are the chairs of Supreme Court Justice Oliver Wendell Holmes Jr. of the class of 1861, portraits of Justice Joseph Story, class of 1798, and Senator Daniel Webster, and a pencil sketch of HLS Dean N. Roscoe Pound.

The Caspersen Room proudly boasts the desk and lunch box of Pound, the dean of HLS from 1916 to 1936. But, during his tenure as Dean, Pound also spent the decade openly supporting Adolf Hitler. In the midst of Hitler’s rise to power, Pound accepted an honorary degree at the University of Berlin in 1934, signifying his legal approval and backing of the Nazi Party in Germany.

After receiving this honorary degree, Pound and his wife enjoyed a long European summer vacation that included lunches with six of Hitler’s closest aides, including Josef Bühler, Edmund Mezger, and Hans Frank — whose self-proclaimed mission was to “‘rid Poland of lice and Jews.’” Frank and Bühler were both defendents in the Nuremberg Trials of 1946 and were sentenced to death, while the Polish Supreme Court ruled capital punishment for Mezger. Pound once said that Hitler was someone who could bring “freedom” to nearby European nations.

Coquillette acknowledged that Pound’s Nazi connections have not been discussed or acknowledged. He is currently working on Volume 2 of Harvard Law’s Bicentennial History, which will offer an in-depth look at Pound’s collaboration with the Nazis. The report will outline Pound’s support of the Nazi agenda, describe his personal assistant who worked as a Nazi spy, and detail the Nazi party’s plans to use Pound’s power to quell unrest in the United States.

The Treasure Room, however, seems to present Pound as a great leader, scholar, and contributor to HLS. Some of history’s most cherished legal masterpieces surround his memorabilia, and a sign asks visitors to “respect the desk” and not lean on it.

The gaze of the Royall family is unavoidable in the Room — their massive family portrait shadows the exit, elevated and reigning over the room. And for now, the eyes of the family will continue to watch.

— Magazine writer Garrett W. O’Brien can be reached at garrett.o’brien@thecrimson.com or on Twitter @GarrettObrien17.