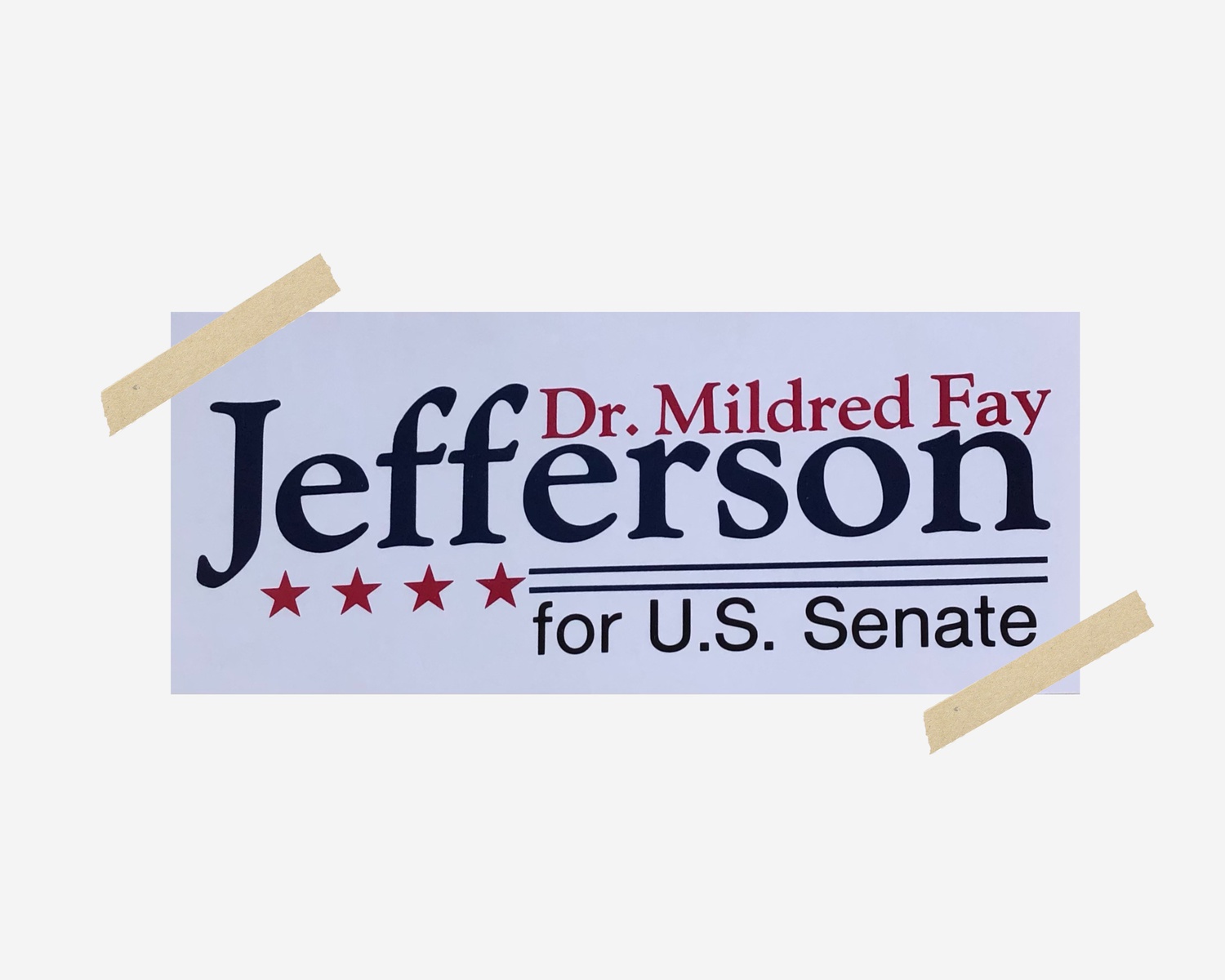 Doctor Mildred Fay Jefferson, In Her Own Words

Dr. Mildred Fay Jefferson was the first Black woman to graduate from HMS, ran for Senate three times, and was a groundbreaking surgeon; however, she would rather be remembered for the lifetime of activism she dedicated to her passion — outlawing abortion.
By Sammy Duggasani and Sarah W. Faber

On January 21, 1947, Mildred Fay Jefferson was admitted to Harvard Medical School; four years later, she became the first Black woman to graduate from the institution — an achievement that took 169 years from the school’s inception. Today, Harvard’s libraries hold a collection in her name. But among 22 boxes of documents, ranging from Christmas cards to legal filings to her death certificate, only one lone folder contains any information about her time at HMS. These boxes live in the Harvard Radcliffe Institute’s Schlesinger Library rather than in the Countway Library of Medicine on HMS campus. Though Jefferson might be key to HMS’s history, medicine is only a footnote in her legacy. Her activism quickly overshadowed her medical contributions, and she found herself at the forefront of the pro-life movement, fueling a political career that resulted in three runs for Senate.

After graduating from HMS, Jefferson became the first female general surgeon to work at Boston University’s Medical Center. Starting in the 1970s, she used her status as a doctor to argue that life begins at conception. In the March/April 1972 issue of BU’s Centerscope magazine, she wrote:

“From conception, the complex, dynamic, developing organism-child is separate and distinct from its mother. The life process, the sum total of energy-exchange reactions, is activated by the fertilization of the ovum from the female by the sperm from the male and is manifested by progressive cell division.”

In an interview with the Boston Globe in 1976, Jefferson explained that her vocation and Hippocratic oath bound her to the “preservation of life.” This interpretation of medical ethics thrust Jefferson into activist realms that would hallmark the rest of her career. Though previously she had not been open about her stance on abortion, the American Medical Association’s resolution that supported freer abortion laws drove her to publicly support an opposing petition.

Jefferson officially began organizing as a member of the Value of Life Committee’s board of governors, which she left to develop the Massachusetts Citizens for Life organization. Her efforts in mobilizing members of the pro-life movement culminated in the founding of the National Right to Life Committee, “the nation’s oldest and largest grassroots pro-life organization,” of which she served as President from 1975–1978. The New York Times reported that during the first year of her presidency, she “spent more time flying around the country making antiabortion speeches than she [had] performing surgery in Boston.” In a handwritten letter to President Ronald Reagan in 1986, Jefferson apologized for having missed their scheduled meeting due to her speech at a pro-life event in Atlanta.

As Jefferson became further entrenched in her pro-life work, her arguments against abortion became grounded in her social justice beliefs rather than in medicine. “When church groups demand government funding of abortion for poor women, they are updating an old fascist model of social planning: keeping down social costs by getting rid of those who would run up the costs,” she contended. In her paper entitled “The Nature of the Race/Class Factor in Abortion,” Jefferson added that “minority populations of African descent face a special threat” with abortion; she incorrectly believed abortion was a eugenics strategy that Margaret H. Sanger, founder of Planned Parenthood, had used to target and cleanse the Black population through her “Negro Project.”

Jefferson’s pro-life advocacy proved powerful. In fact, she is credited with changing Reagan’s stance on abortion from pro-choice to pro-life; he thanks her in a letter: “I wish I could have heard your views before our legislation was passed. You made it irrefutably clear that an abortion is the taking of human life. I’m grateful to you.”

Though she began as a single-issue advocate, Jefferson soon became vocal on a number of issues, including busing, welfare, capital punishment, and the Equal Rights Amendment. She condemned social welfare programs, claiming they would “only create another generation of crippled slaves.” And on busing, she argued that “you just can’t force people to accept one another.”

With a more developed agenda, Jefferson’s aims for public office began to take shape. Supporting the pro-life Democratic presidential candidate Ellen C. McCormack and serving on the Massachusetts Reagan presidential campaign, she garnered greater exposure in political circles. Yet all three of Jefferson’s attempts at the Massachusetts Republican nomination for United States Senate in 1982, 1990, and 1994 were unsuccessful. Apart from her active political campaigns, she continued to advocate for a constitutional amendment that would reverse the 1973 Supreme Court decision of Roe v. Wade. Her influence on anti-abortion activism has held influence beyond her death in 2010.

Jefferson’s life beyond activism has been deeply chronicled. A dissertation titled “The Politics of Abortion and the Rise of the New Right” documents the discrimination Jefferson experienced at HMS, providing insight into her distance from the institution. Jefferson’s presence in Schlesinger’s archives reflects the legacy that she chose to create instead. And in a 2003 profile in the “American Feminist” magazine, Jefferson affirms how her identities shaped the achievements she viewed as her life’s work: “I am at once a physician, a citizen and a woman, and I am not willing to stand aside and allow this concept of expendable human lives to turn this great land of ours into just another exclusive reservation where only the perfect, the privileged and the planned have the right to live.”