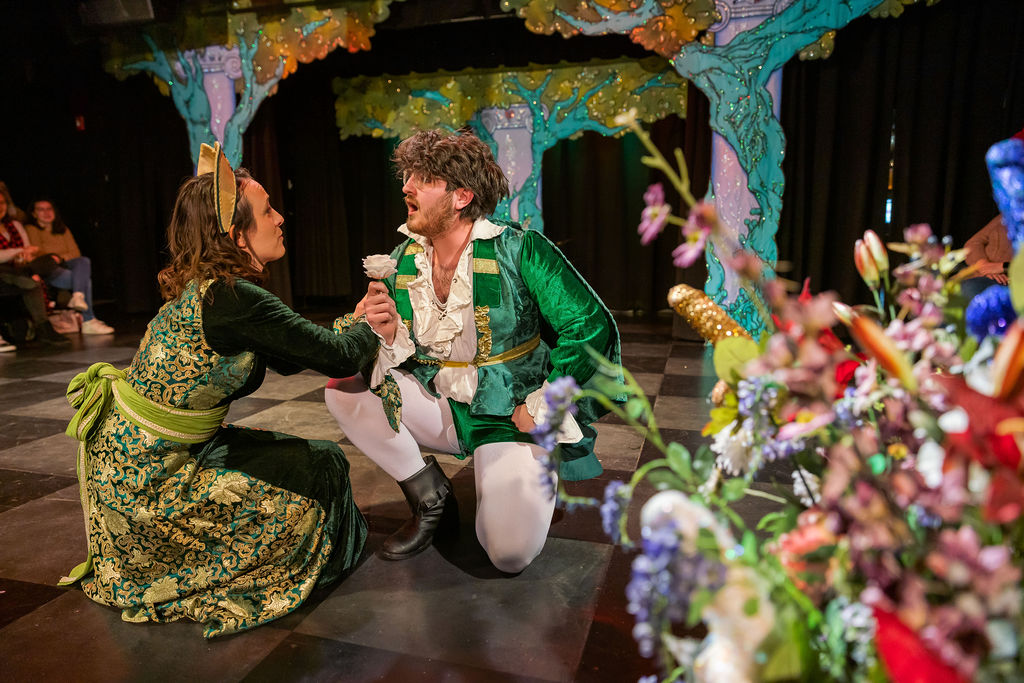 Welcome to Shit-faced Shakespeare. Three times a week, five actors gather in The Rockwell Theater in Somerville  to put on a play — but one of the actors, selected at random each night, performs completely drunk.
By Sarah W. Faber and Sam E. Weil

“Shakespeare can become this delicate thing that is put on a pedestal, and we’re just supposed to admire it from afar — we’re not supposed to get close to it, because we might break it,” says Brett Milanowski. “We like to take it, we like to smash it to bits, find out what’s there, and put it all back together.”

Welcome to Shit-faced Shakespeare. Three times a week, five actors gather in The Rockwell Theater in Somerville to put on a play — but one of the actors, selected at random each night, performs completely drunk. In Thursday evening’s case, Milanowski, playing Demetrius, served as the shit-faced soliloquizer in question. Meanwhile, sober Helena, Hermia, Puck, and Lysander dodged his drunken slings and arrows.

Even though Shit-faced Shakespeare has been entertaining audiences internationally since 2010, no two shows are ever alike. In the past, “We’ve had Romeo and Juliet shows where a drunk Romeo decides he’s gonna get stabbed instead … so, will Mercutio sleep with Juliet? Maybe somebody else is going to die?” says Noah Simes, who described his role, dubbed “compere,” as a combination of MC, babysitter, and “agent of chaos.” “In the moment, you have to come face to face with what’s happening and make it work.”

Simes, clad in a top hat and metallic gold leggings, greeted the audience to begin the show. Against the forest of phallic foliage backdrop and to the tune of a medieval orchestral pop rendition of Major Lazer & DJ Snake’s “Lean On,” he explained the rules: phones off and masks on.

He then handed out a cowbell and a gong to two audience volunteers. Their task was simple: whenever Demetrius was in “danger of becoming sober,” they could sound their instruments, prompting Simes to pause the show and pour him another beer. The gong sounded as Helena desperately pleaded for Demetrius’s affection; the result was a stumbling Demetrius trying to quickly drink, sputtering “this is just fucking foam!”

Plunging deeper into inebriation, Milanowski peppered Demetrius’s monologues with garbled interjections: “You’re a prick” to Lysander, “Because of blocking I’m supposed to be here,” “and the thing I would normally say” in place of a line the alcohol made him forget. Meanwhile, the other actors had to catch every remark that Milanowski flung at them — including a recurring bit of him challenging his castmates to slap him or spit in his mouth — to keep the show (at least somewhat) on track.

Each script is written, produced, and rehearsed sans alcohol. In the case of “A Midsummer Night’s Dream,” Shakespeare’s original script was shortened by cutting scenes and combining characters. For example, Puck served as a narrator in between gyrating over sleeping Lysander and dusting his castmates with glitter from fake roses pulled out of his crotch. (The next day, a sober Milanowski was still finding purple flecks in his ears).

Though the shit-facedness of the acting is quite literally the name of the game, the company takes precautions to make sure the drinker is safe: Have they had enough sleep? Enough to eat today? Are they in a good place, emotionally, to get drunk? If so, they imbibe responsibly under the watchful eye of their “wrangler,” a fellow cast member.

While the drunk actor might be what draws the audience in, Simes says, “a lot of the real work and a lot of the great comedy comes from the skill of the sober actors dealing with the problem that has been presented by the drunk actor. What I love about it is it’s showing off a lot of great performative skill despite being, ‘wink wink, it’s a drunk actor.”

Milanowski’s favorite moments are the more serious and emotional ones: when Juliet kills herself in the tomb, when Beatrice and Benedick realize they’re in love, and, at the end of Thursday night, when Hermia begged Lysander not to leave her.

By the time Lysander awakened from Puck’s glitter-full spell and professed his love for Hermia, each pair in the audience had their arms around each other.

“It’s those moments when a really skilled actor in a space with a group of strangers just pulls an emotional thread that everyone understands,” says Milanowski. “And then there was one time where someone farted backstage, and it was so disgusting someone almost threw up. I mean, that’s the other side of it.”