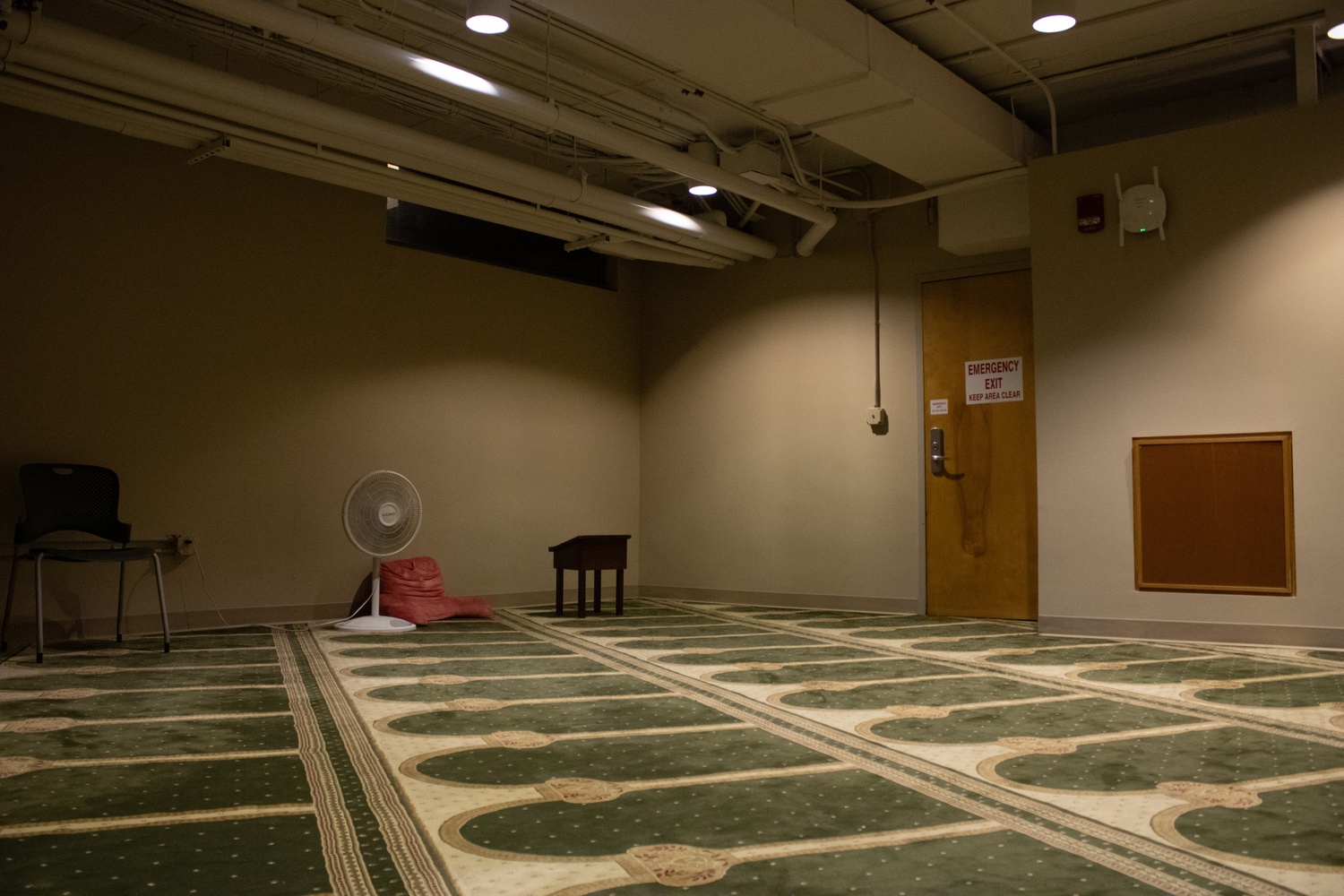 The Hindu prayer space is located in the basement of Canaday Hall B. By Angela Dela Cruz
Advertisement
Advertisement

Tucked away among other typical basement amenities like the common room, laundry, and trash disposal lie the only two spaces dedicated solely to students of Muslim and Hindu faiths at Harvard College.
By Michal Goldstein and Isabel T. Mehta

Navigating the basements of Canaday Hall can feel a bit like shuffling through a labyrinth of pipes and offices and boiler rooms, but that’s not all that is kept beneath the surface of this freshman dorm. Tucked away among other typical basement amenities like the common room, laundry, and trash disposal lie the only two spaces dedicated solely to students of Muslim and Hindu faiths at Harvard College.

The Muslim prayer space, located at the basement entrance of Canaday Hall E, and the Hindu prayer space, located in Hall B, which accommodate individual and small-group prayer, are largely invisible to the eyes of the hundreds who pass through Harvard Yard every day. With Memorial Church towering only several yards away, and Rosovsky Hall — the Harvard Hillel building for Jewish students — just down Plympton Street, some members of the Muslim and Hindu communities feel even more starkly that their limited underground arrangement does not fufill the entirety of their spiritual needs.

To Khalil Abdur-Rashid, Harvard’s first full-time Muslim chaplain, the Muslim prayer space is “a band-aid on a bleeding wound.”

According to the Harvard Crimson’s demographic survey on the class of 2025, Muslim and Hindu students constitute 3.9 percent and 3.1 percent of the student population respectively. Together, these groups nearly equal the 7.4 percent of students of Jewish faith.

The Hindu prayer space opened in 2006 as the first of its kind at Harvard. The Muslim prayer space, meanwhile, has existed for more than 20 years. It is not the sole location that Muslim students can visit to gather or pray — students find community in a prayer and meditation room on the seventh floor of Smith Campus Center and congregate for larger Friday prayer in Lowell Lecture Hall — but it’s the only place at the College specifically dedicated to only people of Muslim faith.

The fight for a more appropriate space for Muslim students to practice their faith is not new, but has been ongoing for more than 25 years. A 1995 Crimson article reported that Muslim students resettled seven different times in 1994 until landing on the Canaday basement and, even then, looked for a larger space. The issues raised in the article then — access, acceptance, respect — are closely related to the issues raised today by Muslim and Hindu students and administrators.

“The space is not conducive, appropriate, or enough,” Abdur-Rashid says. “It is in need of tremendous renovation and change and reform.” There is not enough space in Canaday to gather and pray without waiting in line, and the space needs significant upgrades; Abdur-Rashid says the carpet needs to be replaced and the room needs more storage. “Honestly, going down there in the basement, it always felt so desolate, bare, and depressing,” Alaha A. Nasari ’24, a Muslim student, says.

For Hindu students, Dhwani R. Bharvad ’22, the Worship Chair of Harvard Dharma, admitted that the group was “a little worried” about their first religious gathering post-Covid and even considered running two different shifts for people to come into the prayer space due to its capacity limits.

Both Muslim and Hindu students acknowledge their gratitude for their respective spaces, but also express feelings of disappointment and isolation. “As much as I have love for [the Muslim prayer space],” Ali A. Makani ’24 says, “it’s still clear to every single Muslim when they walk in there that we are relegated to the space of invisibility, that Harvard refuses to publicly acknowledge and support the population here on campus.”

The basement location directly affects how Muslim and Hindu students feel about the extent to which their communities are welcome on campus, giving visibility added importance. “You typically associate a basement with where you throw stuff in there that you don’t really care about,” Alvira Tyagi ’25, a Hindu student, explains. To some, the spaces feel especially inappropriate given their intended purposes: spiritual retreat. “Imagine if they put CAMHS in a basement,” Adbur-Rashid says. Makani puts it simply: “I just don’t like seeing brown people put in basements.”

Abdur-Rashid argues that the lack of visibility exacerbates the situation by making it hard to address. “The more you can’t see communities gathering, the more the problems don’t get realized,” he said. “The discussion about space is always undermined by the fact there is no visibility regarding the need.”

University spokesperson Nate Herpich declined to comment on the perceived inadequacies of the College’s Muslim and Hindu prayer spaces.

According to Abdur-Rashid, the Board of Religious, Spiritual, and Ethical Life began to discuss updating the Muslim prayer spaces over a year ago, but these conversations came to a halt during the pandemic. The chaplain now plans to bring up these concerns about space at the Board’s next meeting. Bharvad also expressed Harvard Dharma’s desire to remodel its space.