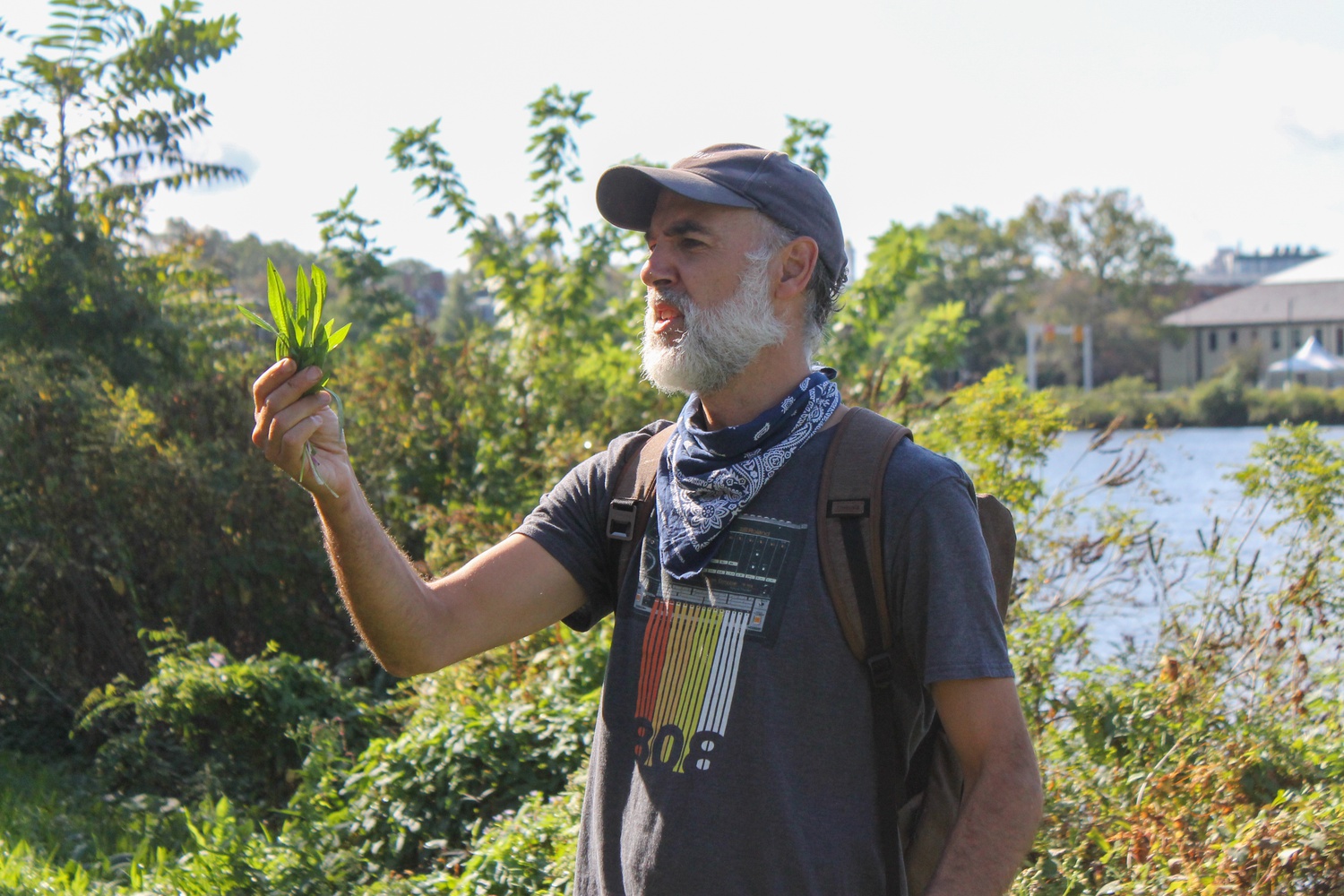 Last Sunday, I skipped my usual breakfast in the dining hall. Instead, I grabbed my coffee to go and ate from Mother Nature’s dining hall: I sampled quickweed and yew berries, kousa dogwood and narrow-leaf plantain, wild onion and garlic mustard, amaranth and elderberry.

Full disclosure: my untrained eye did not spot these plants on its own. I had help from David L. Craft, an assistant professor at Harvard Medical School and Massachusetts General Hospital who leads monthly urban foraging tours. Craft’s research focuses on machine learning’s application to cancer treatment, but his interest in foraging comes from his “student mentality,” as he put it: “Up to the age of 30, I started to realize that I didn’t know a lot [of plants around me in the city], and I bet a lot of them are edible.”

Our 19-strong tour group met at Fjällräven Cambridge, where assistant manager Ivy K. J. Rose introduced Craft and explained that the outdoor apparel company sponsored the event to further its mission to get people out in nature. We then headed west along Brattle Street, where Craft spotted our first edible plant: purslane.

But he cautioned us against immediately eating this particular specimen: “Purslane always attracts human hair,” he said, so he advised us to wash it, and wash it well, before partaking. No one likes a side of human hair with their first course.

Story Street proved more fecund. A quickweed plant grew next to a black nightshade plant, scrunched up right next to the curb. Quickweed, a garden-variety weed, has minute white-and-yellow flowers. Although it closely resembles a black nightshade, the plants are entirely different. The quickweed’s flavor and texture reminded me of parsley; the small black berries on the nightshade tasted like miniscule cherry tomatoes. 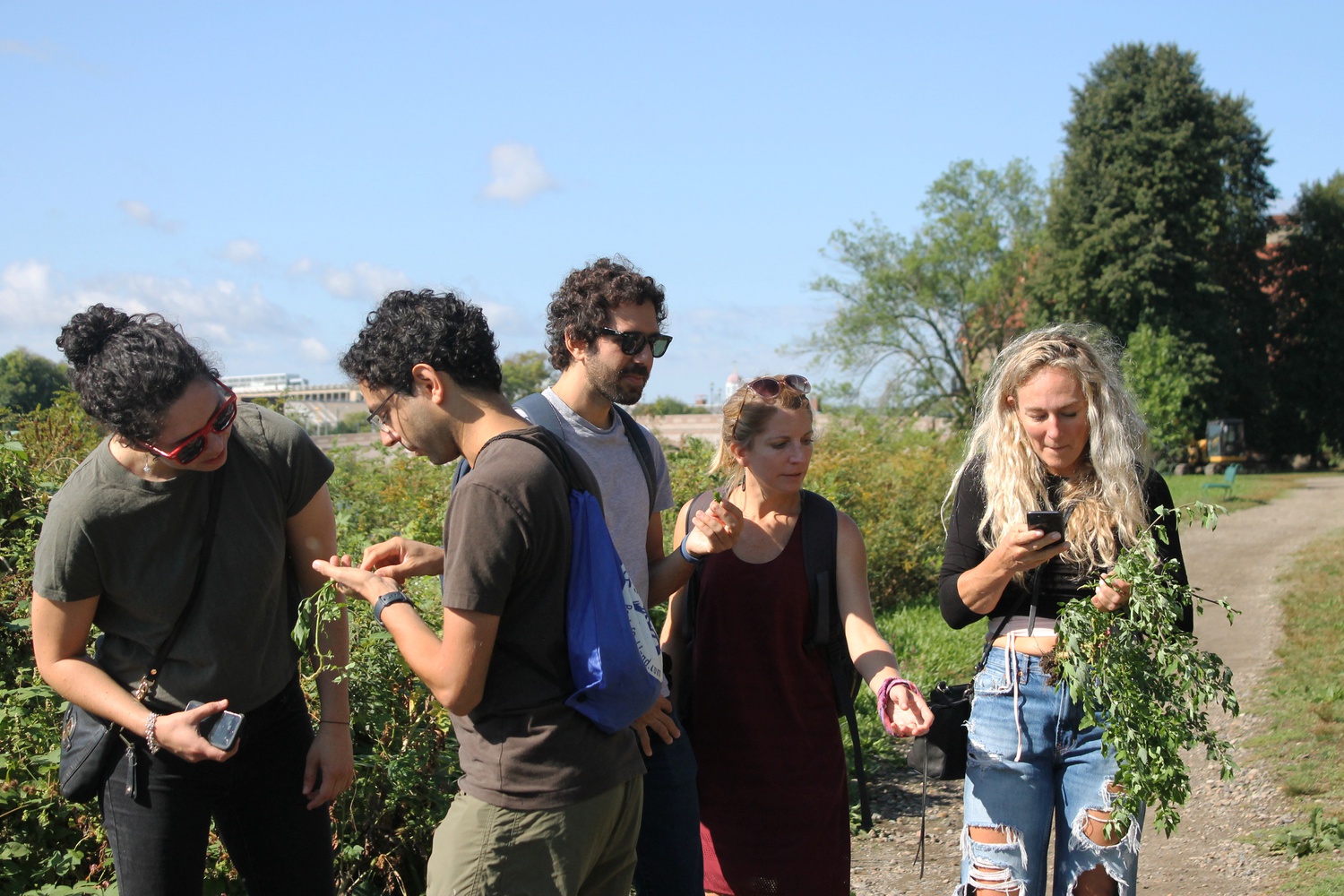 Participants on the plant foraging tour look at plants by the Charles River. The tour was free for participants and hosted by Fjällräven Cambridge. By Sophia S. Kim

Close to the intersection between Story Street and Mount Auburn Street, Craft spotted yew berries. Craft explained that yew trees are normally poisonous, but ironically, they played a role in developing early cancer drugs precisely due to that property. “You asked me earlier about the intersections between foraging and my research, and here’s one!” Craft joked. However, yew berries are edible, and for a moment, the group resembled a 20th century dugout chewing tobacco and sunflower seeds as we sucked the yew berries’ flesh and spit the seeds out, almost in unison.

Philecia F. Harris, an experienced forager and librarian from Roxbury, Mass., said that before she attended the tour, she never had the confidence to eat yew berries. “But now that he did it, I did it as well,” she said.

This blind trust permeated the entire tour. What Craft ate, we ate.

As we moseyed toward the river, Craft guided us along University Road. At a red-brick apartment building’s courtyard, he pointed out a “classic amateur foraging mistake.” If a forager picked up this orange-gilled jack-o’-lantern mushroom and brought it home to cook, “they would have a real bad night.”

Spotting another plant at the courtyard’s opposite end, Craft dashed over to a variegated kousa dogwood, evincing a boylike excitement. “I’ve never seen fruit on a tree like this,” Craft said, calling the tree a “botanical curiosity” and comparing the red stone fruits to soccer balls. The fruit’s flesh was sweet — it reminded me of a Maraschino cherry — but the rind balled up in my mouth and left a bitter aftertaste for several minutes.

We finally arrived at the Charles River, where Craft made a beeline for a tangled mass of foliage along the river. “It’s a mess back here, but I love it!” Craft exclaimed. In the mass, he pointed out curly dock, which he suggested putting in soups, and burdock, which has edible roots that can form the basis of a substantial meal.

“Narrow-leaf plantain makes you feel like an animal,” Craft continued, pointing to bountiful supplies of the low-growing, somewhat bitter plant above the river. He also showed us the spindly, almost fragile wild onion, recommending that we combine the two to make a “field pesto” of sorts. The bitter and piquant hints melded to create a remarkable pesto substitute. 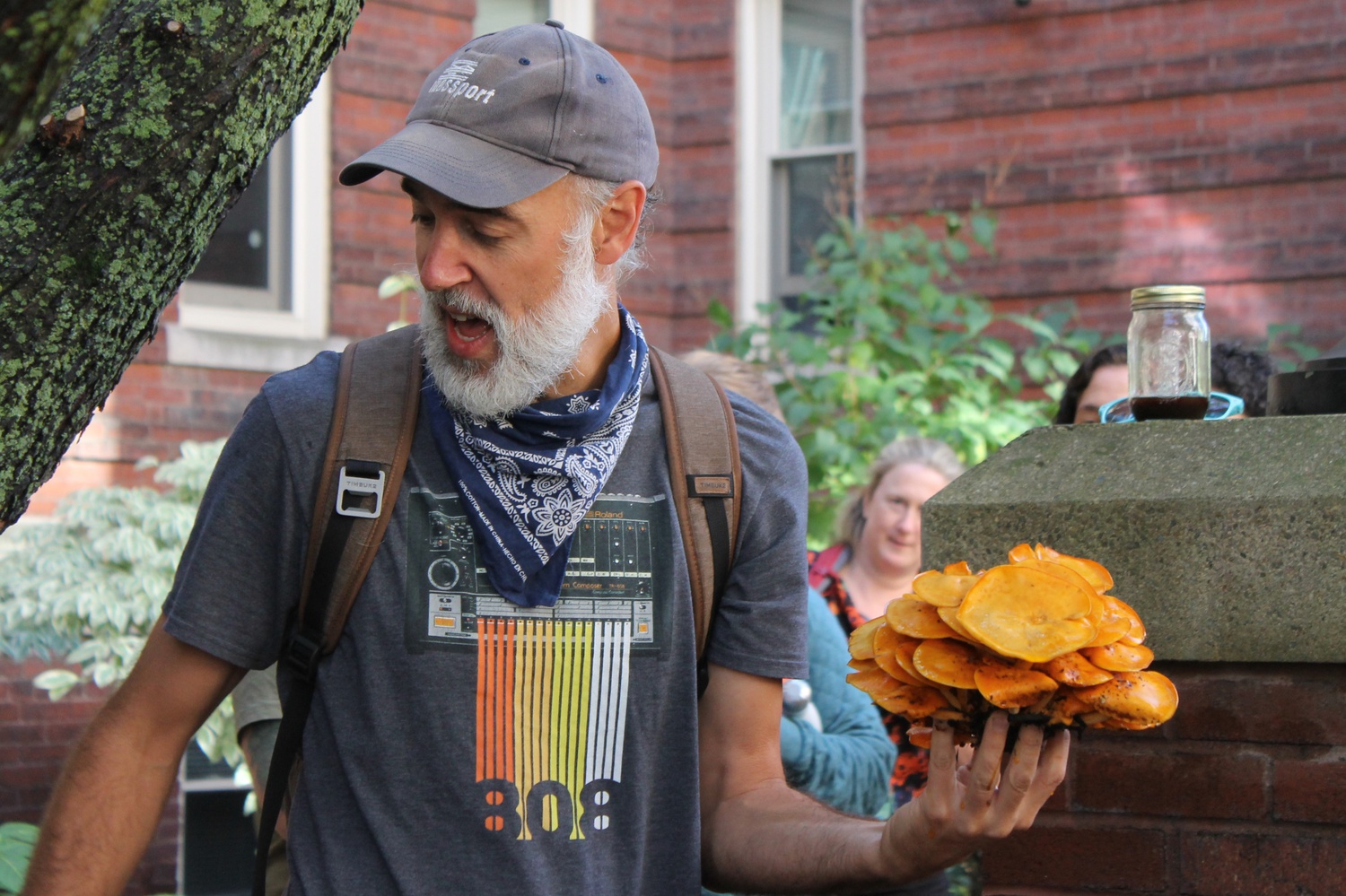 David L. Craft holds up a jack-o'-lantern mushroom in Cambridge. These mushrooms are poisonous. By Sophia S. Kim

Craft spotted an oak tree on the other side of the river, so we ambled towards Weeks Bridge. Along the way, Craft noticed an apple tree along our path, so he clambered down to the riverbank to shake the lonely apple present out of the tree. The apple fell into the river — almost the forbidden fruit — but that didn’t stop Craft, who fished the apple out and parceled it out among the tour group.

Finally, we arrived at the vaunted oak tree, but discovered no edible mushrooms there. The oak was not a total bust: Craft found a black nightshade plant with enough berries for everyone to enjoy. We headed back to Fjällräven along the Charles, sharing the fruit and passing along curious specimens we found: an amaranth plant with its distinctive notched leaf and red root and an elderberry vine.

“Foraging is very addictive to me,” Craft said at the start of the tour, “because it feels like a primitive, tribal connection to the earth. It’s nice to sort of reinvoke that.” Indeed, it felt good to reconnect with nature, even within the Harvard bubble.

Some of the tour attendees would agree with that. After sampling the cornucopia that the Charles had to offer, Aviv Ovadya, a fellow at the Belfer Center, joked that he “should have brought a produce bag” to bring nature’s bounty back to the dinner table — just like Harris, Craft, and others have done many times before.