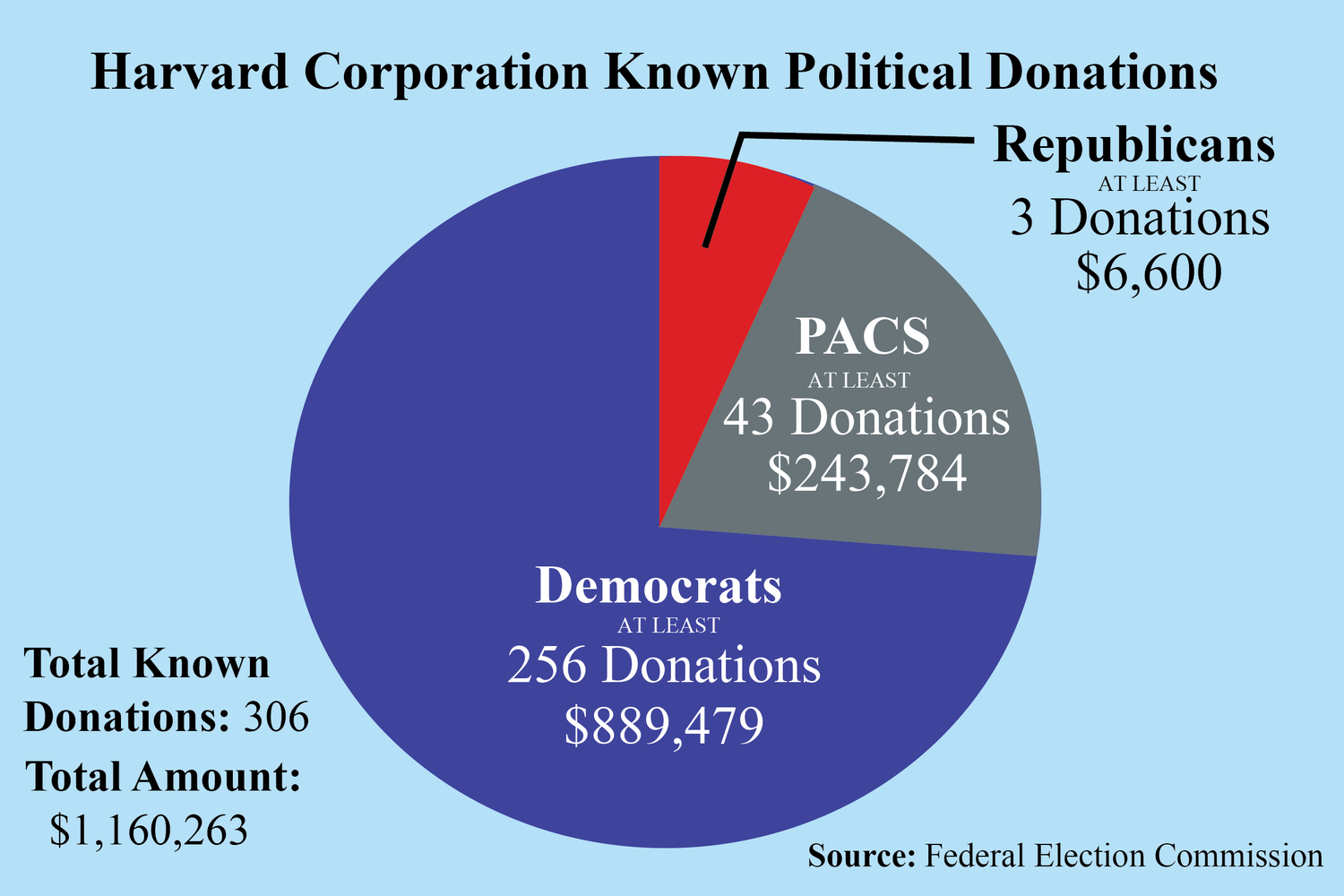 More than 100 candidates running for federal office in 2020 benefited from the financial support of members of the Harvard Corporation — the University’s highest governing body, which includes some of the country’s top finance executives, academics, and corporate lawyers.

Almost none of those candidates were Republicans.

Members of the 13-person body donated at least $1,160,263 to federal candidates and political action committees in the two years leading up to the 2020 election, according to an analysis of Federal Election Commission data conducted by The Crimson.

The Harvard Corporation, formally known as the President and Fellows of Harvard College, is the most powerful entity at Harvard, exercising sway over the University’s direction and resources, and weighing in on nearly all top decisions. Chartered in 1650, it is one of two governing boards at the school, along with the alumni-elected Harvard Board of Overseers.

Corporation members donated more than $899,000 to Democratic candidates running for federal office between the 2018 and 2020 elections, FEC data show — compared to roughly $6,600 to Republicans.

The Crimson reviewed FEC records for each member of the Corporation, cross-referencing their names with their primary employers. The FEC database does not use a universal coding system to track donor data, meaning some Corporation members could have donated further under other names or employers. FEC data did not show any contributions made under billionaire David M. Rubenstein’s name and employer, the Carlyle Group.

According to The Crimson’s analysis, former United States Secretary of Commerce Penny S. Pritzker ’81 emerged as the most generous benefactor, contributing more than $861,000 mostly to Democratic U.S. Senate and House candidates.

Pritzker, a member of one of America’s wealthiest families, has a net worth of about $3.1 billion, according to Forbes, making her the 368th wealthiest person in the country. She donated $100 million to Harvard last month to support the construction of a new Economics Department building. Her brother, J.B. Pritzker, is the governor of Illinois.

She has long been a prolific political donor, having contributed at least $1.5 million to Democrats between 1990 and 2019, according to a 2019 Crimson analysis.

Members of the Corporation collectively donated to at least 18 PACs ahead of the 2020 elections, totalling more than $243,000.

University President Lawrence S. Bacow has not made any political donations to federal candidates since taking office in 2018, according to FEC data. Before arriving at Massachusetts Hall, Bacow donated to a handful of Democratic candidates, including former presidential nominees Hillary Clinton, John F. Kerry, and Michael S. Dukakis.

William F. Lee ’72, who has served as the Harvard Corporation’s senior fellow since 2013, donated more than $47,000 to Democratic candidates ahead of the 2020 elections. Lee, who is a partner at the law firm WilmerHale, was first elected to the Corporation in 2010.