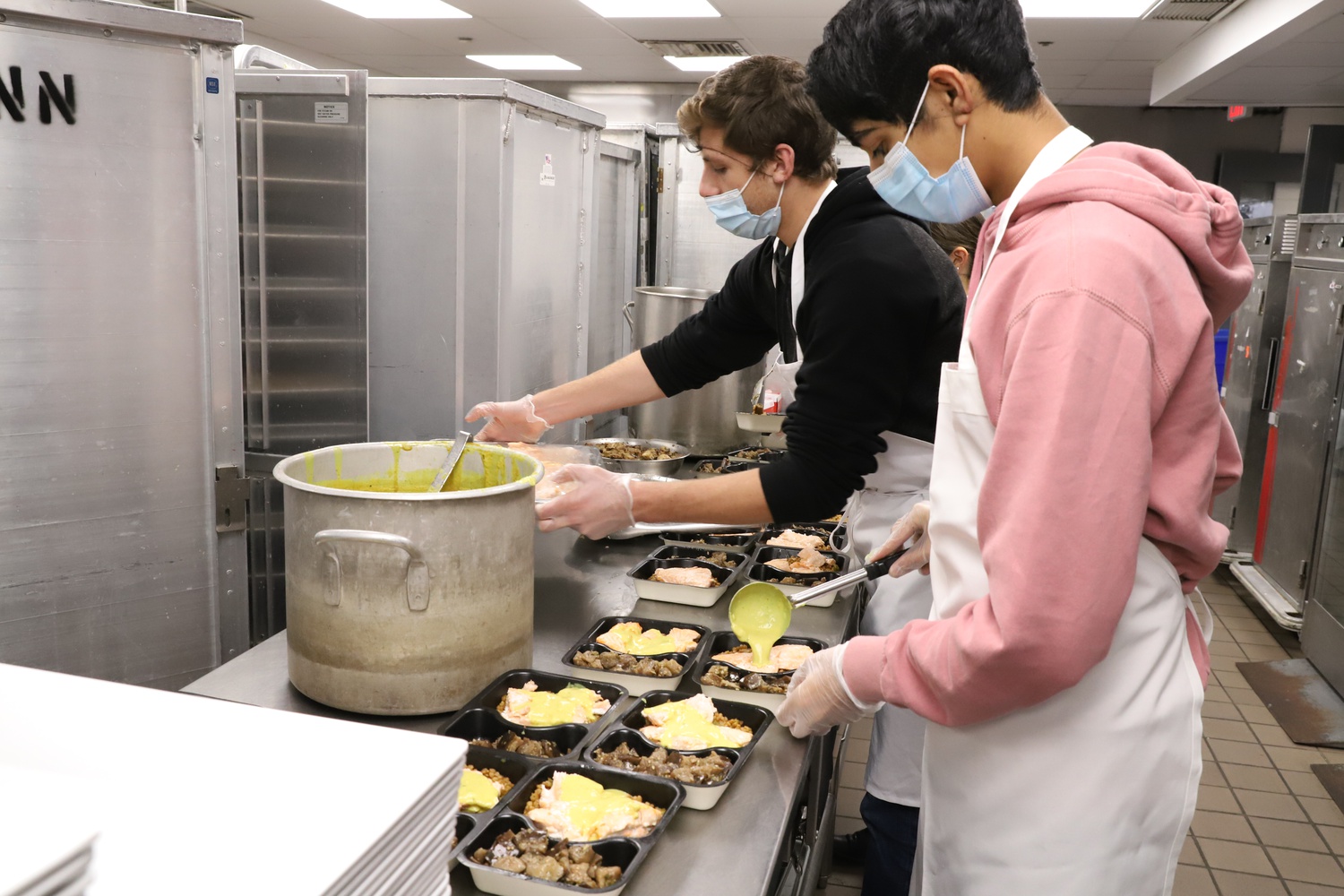 Methodically, volunteers plate any uneaten food and frozen leftovers from the day, portioning out balanced meals consisting of proteins, starches, and vegetables into sectioned containers, assembly-line-style.
By Amulya S. Garimella

At 7:30 p.m., the last dinnertime stragglers leave Annenberg and the doors shut. But two nights a week, small groups of student volunteers file back in. Methodically, they plate any uneaten food and frozen leftovers from the day, portioning out balanced meals consisting of proteins, starches, and vegetables into sectioned containers, assembly-line-style.

These meals will be frozen and redistributed to busy community college students balancing school and jobs, families in homeless shelters, and others in need. The meals are part of the Family Meals program run by Food For Free, a nonprofit in the greater Boston area that, according to its website, “fills the gaps in the emergency food system.”

Harvard is reaching its seventh year of partnership with Food For Free. In the 2018-2019 school year, the last full year the program operated, Harvard produced 4,064 meals for the nonprofit. This fall, the program is restarting after being suspended during the pandemic and has seen lots of interest from Harvard students and staff. “Almost all, if not all, of our sessions for this semester are booked for volunteers,” says Breda R. Page Violette ’24, a sophomore and a Food Recovery Fellow with HUDS’s Food Literacy Project.

Page Violette emphasizes the dignity inherent in the meals she plates. “This is a good meal to eat, a balanced meal to eat, a nutritious meal. They’re packaged nicely,” she says, forming the shape of a plate with her hands as she speaks. 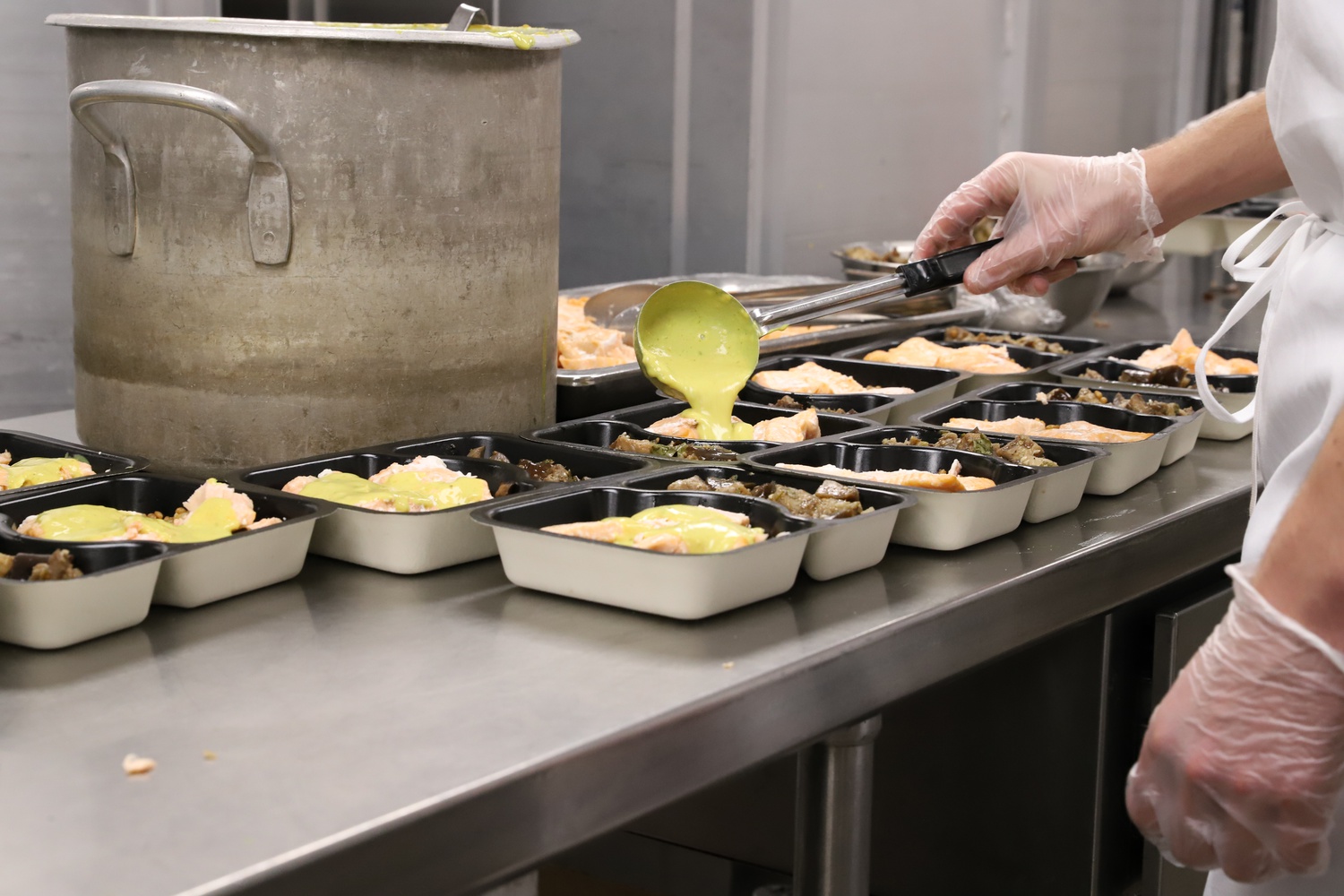 Highlighting the nutritional quality of the meals, Page Violette notes that if the volunteers run out of an ingredient, they freeze the remaining food and stop plating meals for the night. Growing up on a fruit and vegetable farm, Page Violette says she saw firsthand how access to balanced and nutritious meals can fall along class lines.

When Massachusetts implemented its Healthy Incentives Program (HIP), which offered rebates to families on SNAP for fresh produce purchases, she says she noticed that the customer demographics dramatically changed at the farmers markets where she and her family sold their produce.

Stephanie Tyler Smith, the vice president of programs at Food For Free, says that providing these prepared meals overcomes accessibility issues between people and the food they need. “It is expensive” and “time consuming” to cook food while poor, she says.

Smith mentions how something as simple as a food pantry’s closing hours might prevent someone who works overtime from getting a meal. She says it’s important to meet people where they are so that those who are already struggling don’t have to be burdened with an extra to-do or deadline.

Smith says she’s received personal calls from community college students who’ve received Family Meals. “They're like, ‘that was amazing for me because I could eat dinner when I came to class. And otherwise, I work all day, and I couldn’t do that. And then I could bring some home for my two kids and it was amazing.’”

Working at a food pantry, Smith met families who were receiving SNAP, yet struggled to make ends meet due to restrictions on those benefits. “You see their whole situation on paper and then you see that they're only getting $16 a month in food in SNAP,” she says.

According to Smith, people tend to overlook the realities of food insecurity, which are intimately tied to people’s individual situations and daily lives and thus difficult to generalize: “There are still so many Americans that don’t realize that people are food insecure in this country.”