Between the uncertainty of health and safety concerns, workplace closures, and contract negotiations, the pandemic has presented unprecedented challenges for Harvard’s workers.
By Cara J. Chang and Meimei Xu 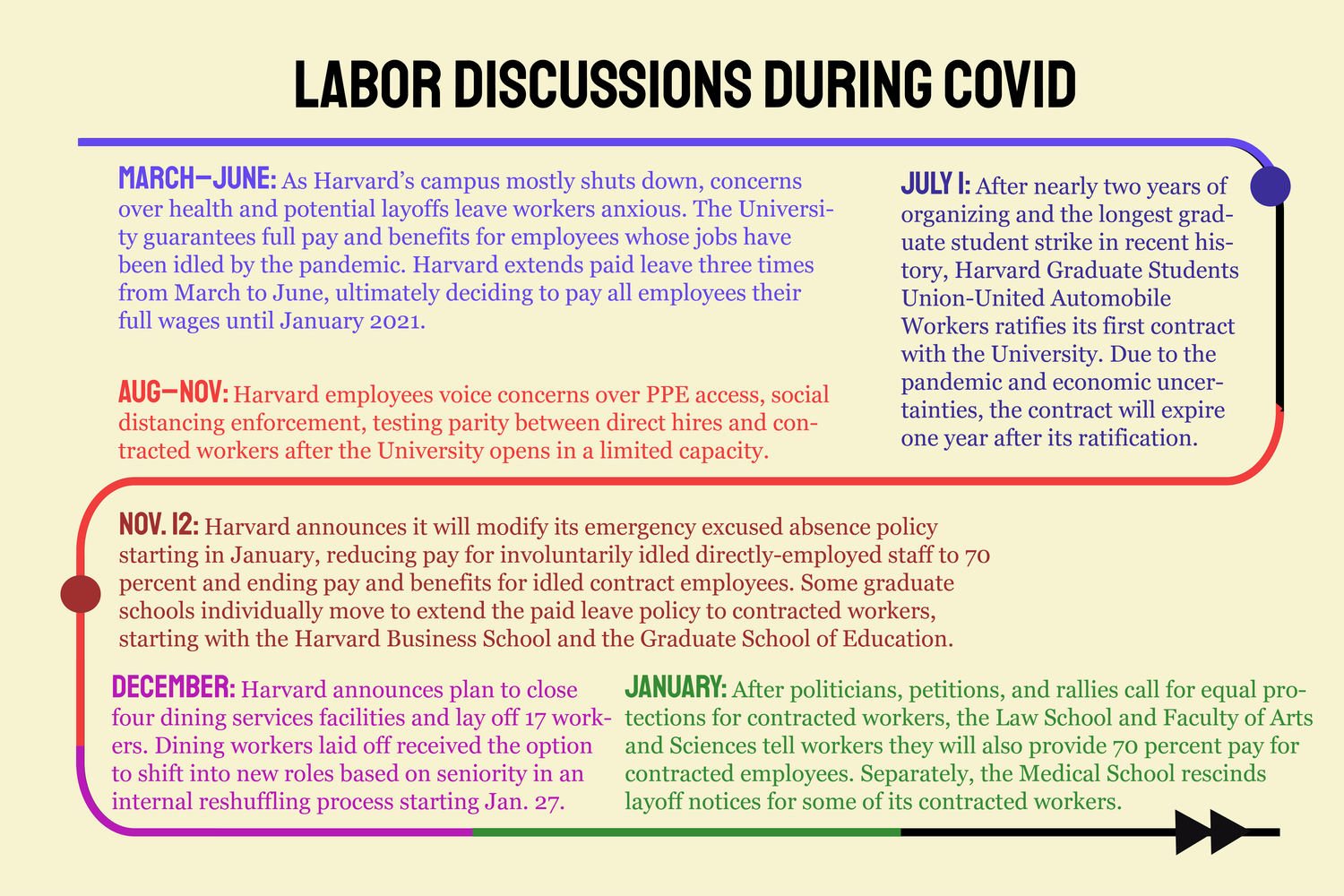 Ever since Harvard's campus largely shut down in March 2020 due to the public health crisis, Harvard workers have had to grapple with a rash of uncertainties — from their health and safety to the security of their employment. By Justin Y. Ye

Between the uncertainty of workplace closures, contract negotiations, and staff health and safety, the pandemic has presented unprecedented challenges for Harvard’s workers.

“The anxiety of the loss of life, the loss of loved ones, the anxiety of getting infected with the virus — that has been extremely difficult,” said Roxana L. Rivera, the vice president of the 32BJ Service Employees International Union, which represents Harvard’s custodians and security guards.

After Harvard sent students and most staff home last March, employees working in person grew anxious over shortages of personal protective equipment, while those idled by the pandemic voiced concerns over parity in emergency benefits between direct hires and contracted workers. Students and other Harvard affiliates consistently pushed the University to protect all of its workers as it grappled with the public health and financial crisis.

Ultimately, the University guaranteed pay and benefits for all workers until Jan. 15, after which workers and supporters successfully pressured some of Harvard’s individual schools to extend their emergency paid leave policies offering 70 percent pay to idled contracted workers as well as direct hires.

Even with the 70 percent guarantee, some workers continue to face harrowing financial decisions.

“There’s a real genuine concern that HUSPMGU members who are going to see their income reduced to 70 percent are going to be faced with very, very challenging decisions,” Harvard University Security, Parking, and Museum Guards Union Treasurer Sean F. McNally said. “There is a real fear that somebody or more than one person is gonna fall through the cracks and could become homeless because of this.”

Amid such uncertainty, four union contracts expired, bringing additional unions to the bargaining table with the University after two years of negotiations between Harvard and its graduate student union ended with ratification of their first agreement. Given the pandemic, maintaining healthcare benefits and workplace safety were at the top of unions’ agendas. Custodians, contracted security guards, security, parking, and museum guards, and construction workers each ratified one-year extensions of their old contracts. Harvard’s graduate student union also filed an intent to bargain with the University for its second contract.

Organizing for worker benefits and protections remotely has added an additional challenge for unions.

“We fight for good jobs and decent wages, but this was something that was much larger than that and called our organization and our membership to come together in ways that hadn’t been asked of us or them in the past,” Rivera said.

Here's what Harvard's workforce has experienced over the last year:

March–June: As Harvard’s campus mostly shuts down, concerns over health and potential layoffs leave workers anxious. The University guarantees full pay and benefits for employees whose jobs have been idled by the pandemic. Harvard extends paid leave three times from March to June, ultimately deciding to pay all employees their full wages until January 2021.

July 1: After nearly two years of organizing and the longest graduate student strike in recent history, Harvard Graduate Students Union-United Automobile Workers ratifies its first contract with the University. Due to the pandemic and economic uncertainties, the contract will expire one year after its ratification.

December: Harvard announces its plan to close four dining services facilities and lay off 17 workers. Dining workers laid off received the option to shift into new roles based on seniority in an internal reshuffling process starting Jan. 27.