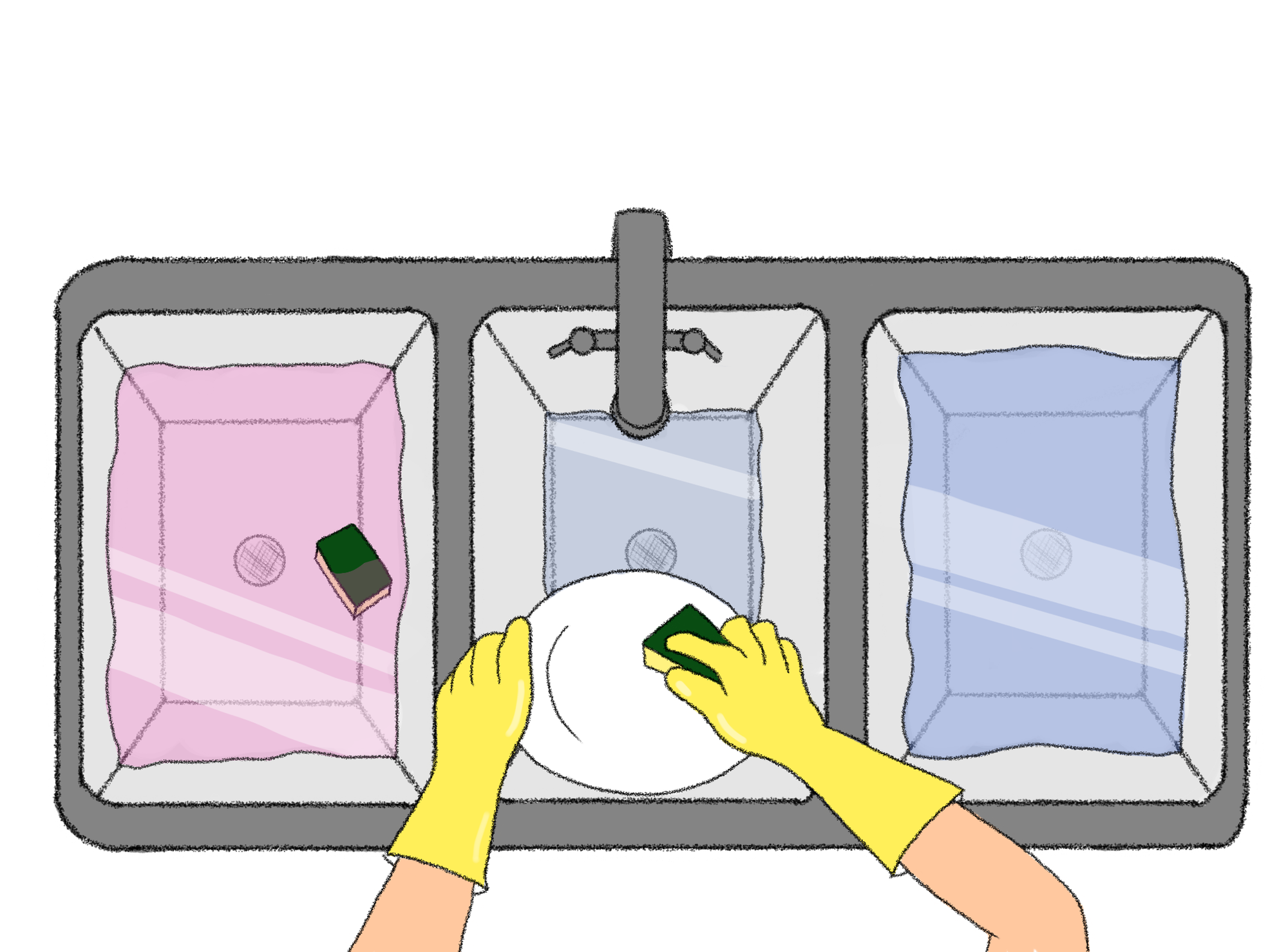 Notes From the Dish Pit

There is truly nothing exceptional about a 20-year-old working a vaguely unpleasant low-wage job. Yet I had to explain to college friends what I was doing, calling them after work to detail why tolerating burns from seeding ghost peppers was a victory.
By Olivia G. Oldham

I’ve never been known for my dishwashing abilities, and I told the chef this much the day he hired me. At home, I was exceedingly thorough, too slow — a terrible trait for any dishwashing professional trying to keep a kitchen going — and repulsed by my family’s leftover food. This time around it was the residue of strangers, contaminated, maybe, by a virus.

I didn’t work any service jobs in high school. I’d been a docent at the Museum of Math, donning a marigold polo and getting my feet trampled by the museum’s famous square-wheeled tricycle; I’d spent a summer shelving books at a local library. But I’d never really had to treat a customer as if they were always right, my voice reaching a false, cheery register.

In the last days of August in Delaware County, I began working as a host at a sleek Asian fusion restaurant. I worked the lunch shift. I’d take the commuter rail a few stops, climb up a steep hill while batting away invasive lanternflies, and get paid $10 an hour to sit, read, and ask people to please put on their masks. It was a popular gig for local 15-year-old girls; my spot opened up because their summer vacation was ending. The few hours I worked were nearly as lonely as quarantine.

Browsing Craigslist on a slow Tuesday, I found a listing for a dishwasher and prep cook at an “American bistro” opening across the street from my apartment. I printed out my résumé at work and delivered it the same day; I quit the hosting job a few days later.

I was the bistro’s first employee, and I spent the first of my 11- or 12-hour shifts peeling stickers off the bottoms of bowls, plates, ladles, pans. The kitchen was around the size of a three-stall public restroom. My world was the sink, partitioned into three basins. Left: pink, soapy water, and a few floating sponges. Middle: empty, for rinsing down with a spray gun. Right: blue sanitizing liquid. I liked that one: you’d drop a couple tablets in the water at the start of the day, and measure the concentration on a slip of paper.

I wore thick yellow gloves, designed for much larger hands, which often tore on steak knives, flooding the gloves and pruning my hands. By my feet sat a bus tub for dirty dishes. (Health codes, as you might have realized if you’re familiar with them, were not followed closely.) By the end of every shift, my socks were soaked with cold dish water, and my back shot with pain.

Once the restaurant opened, the slow hours of the afternoon transformed entirely. I scurried back and forth through the kitchen, hauling tubs of dishes with chewed up steak and spilled crème anglaise and barely-touched mousse, sneering at the slow pace of the busser when I was in a really bad mood, and wiping plates off with my gloved hands in a single swipe. I would occasionally get so hungry that I felt tempted to eat off the plates, though I never did — if not for the pandemic, I’m not so sure what I would have done when faced with an untouched crostini. My dad, who had worked as a dishwasher in his twenties, semi-joked that steak was the best, since “you can cut around the bites.”

Everyone else working at the restaurant was also white, and also college-educated. The $11 I made each hour were survivable, but for another person, it might have been unlivable. (Hazard pay was a distant dream.) I had a dual sense of the precarity of the job: I needed it, but I could (and did) leave for a tutoring gig, and I struggled to feel like my labor was valued. Though I took the job on the promise that I’d learn how to cook, whenever I held a knife I received skeptical glances — no one had actually taught me the proper form. I craved the kind of assurance and confidence in my ability I was used to, at school and in other jobs. Dishwashing is deemed “unskilled labor,” something anyone could do — yet, in a sense, I could not. After a few months, I quit and went back to virtual jobs with shorter hours. Better pay, less work.

There is truly nothing exceptional about a 20-year-old working a vaguely unpleasant low-wage job. Yet I had to explain to college friends what I was doing, calling them after work to detail why tolerating burns from seeding ghost peppers was a victory. I’d go to virtual talks hosted by the College, where students in the audience would go around and describe their quarantine — they were writing plays, interning at tech companies, attending classes — and upon explaining my job, I would sometimes receive consolation from professors or, more often, tones of approval, as if I’d made the choice to build some character on my gap year.

I grew to resent the front-of-house management as most in the back-of-house tend to: I was grubby and always tired, and they came in around 4 p.m., mostly sitting at the bar drinking glasses of wine. The town was wealthy and not at all densely populated, and these two things made it easy to forget that a pandemic was going on — you could walk its suburban streets for miles and encounter only one person, walking their dog. At the town center sat an organic grocery store, where my roommate worked as a cashier. She came home once to tell me that an older woman had thanked her for “risking your life to feed me.” At the restaurant, the owners would commend those of us in the kitchen, saying, “You work so hard, you deserve so much.” We laughed about it later. “If I deserve more,” one cook said, “why don’t they pay me more?”

I remember seeing a picture of the restaurant taken when the owners began to renovate the space. Walls were torn down, walls were constructed, and light filtered through the storefront in unfamiliar patterns. The owners, who had little restaurant experience and didn’t know any better, had chosen the dimensions of our cramped kitchen. It was hard to forget what the chef told me my first day: If the kitchen had been any bigger, they’d have bought a dishwashing machine, rendering me obsolete.

— Olivia G. Oldham is the Magazine Chair of the 148th Guard. Follow her on Twitter at @olivia__oldham.