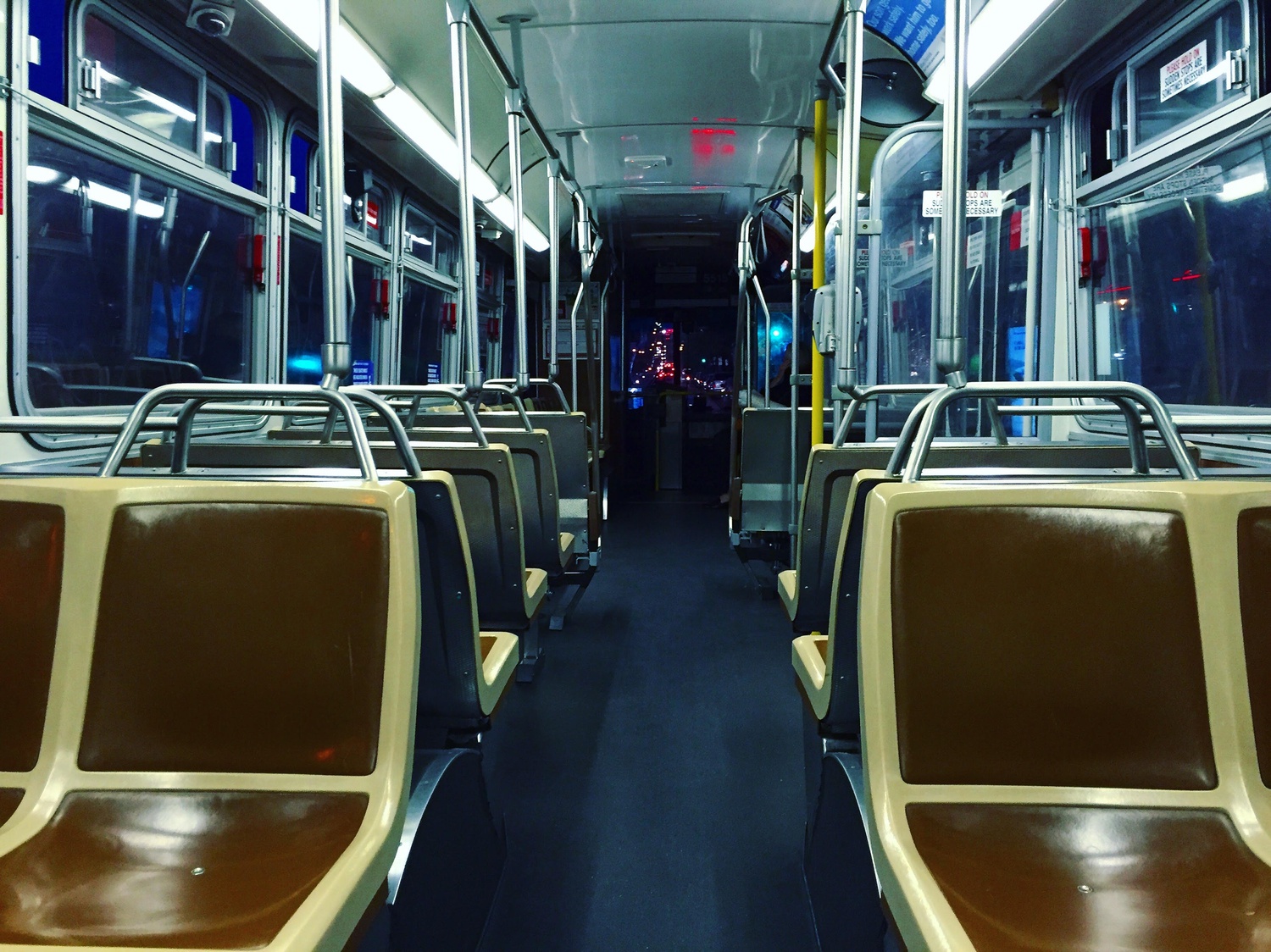 A Ride with Hatred

I am only half-surprised when a man spits in my face on the bus. What surprises me is my response, or lack thereof.
By Lana J. Reeves

I am only half-surprised when a man spits in my face on the bus. What surprises me is my response, or lack thereof: In my periphery, I watch him gather mucus from somewhere deep and hideous in his gut, then hack it up dramatically for a prolonged 10 seconds before swishing it from cheek to cheek — right, left — and ejecting it onto my bare neck.

Thinking back, I don’t know why I didn’t duck. I sat there, stiff against the blue plastic seat, and felt the wet pool of hate hit me. I must not have expected him to actually do it. I must have assumed that he’d see me staring straight ahead, legs shaking, and change his mind, swallow it back down and turn away. Or maybe I made a mental calculation that it was somehow more dignified to just take it.

Somehow less surprising were the words that followed the impact, hurled at me with far more menace than the saliva: “Fucking Asians.”

I consider myself extremely lucky to have been shielded from the ugliest impacts of racism for most of my life. The reasons are twofold: First, I am only part Asian — my grandmother immigrated to Hawaii from Japan in her mid-twenties. She instilled an appreciation for Japanese culture in me and my sister through seasonal activities like Obon, a yearly ancestral honoring, and MSG-laced boxed curries. I think she felt a responsibility to commemorate our Japanese heritage given that her daughter — my mother — married a white man.

Second, Hawaii is diverse to the point of inversion — you’re more likely to be playfully name-called for being white than for being anything else. Cultural uniqueness is the baseline. With the exception of Native Hawaiians, everyone who lives in Hawaii is an immigrant of some kind, of some generation, and most are eager to tell you exactly how they got there. The majority of people looked similar to me — a wonderfully ambiguous mix of Asian, Pacific Islander, and the occasional European missionary. I could be Japanese at home without sacrificing my sense of belonging or adopting a mindset of “otherness.” I am grateful to have grown up like this; I have a feeling it’s rare.

When I moved to Massachusetts in my freshman fall, I confronted a fabled challenge among Hawaii youth: adjusting to mainland racial dynamics. A friend who had newly relocated to Connecticut declared to me over the phone, “I’ve never been surrounded by so many white people!” This rang true for me, too — although Harvard has a substantial Asian and mixed-race population, I was thrust into the position of minority for the first time. While adjusting to both college life and my new hyper-awareness of race, I questioned whether I even wanted the Japanese part of myself to follow me here. I rationalized this feeling with the argument that it was unnecessary to declare any specific racial identity — I never had to before, so I wouldn’t now. I wouldn’t stoop to the level of self-definition simply because the mainland seemed to demand it.

But an inner part of me was ashamed by my hesitation to display my Asianness. Was it my attempt to assimilate into Harvard, an institution with such an Anglo-Saxon history? I was certainly proud of my ethnicity (at least to the extent you can be proud of something you can’t really control), but I didn’t feel an urge to announce it. During the activities fair, I hovered near the Half Asian People’s Association table, indecisive. In the end, I didn’t join.

Personally, I’m hardly connected to Japan at all — I’ve only visited the country a few times to see family. Amidst the intense homogeneity there, I feel more out of place than I do in the U.S. I’ve never been particularly fond of Japanese art, or music, or what I saw as horrifyingly sexist and capitalist maid-outfit fashion trends. My grandmother was the only reason I even learned Japanese, so separated from her, my adequate language skills are reduced to a party trick.

I don’t know if this is common among mixed-race Asians, but I’ve always felt conflicted about picking and choosing my moments of cultural expression, of otherness. I know my Japanese fluency feeds into Western fantasies of exoticism, but I can’t deny that the validation is nice. “That’s so cool!” friends exclaim when I casually converse with my grandmother or translate the dialogue of a Japanese film without subtitles. There’s something twisted about the performative nature of this — alongside the warm glimmer of acceptance, I also feel dirty.

But in college, being Asian was cool in a way I hadn’t experienced before. Everyone seemed to be listening to BTS, or watching Japanese horror, or wearing dubiously appropriated Chinese-inspired garments. I vividly remember when “Parasite” won awards at the Oscars — my roommates and I streamed the entire ceremony on a laptop in our fourth-floor common room, howling with delight when Bong Joon-Ho took the stage again and again. When “Minari” debuted, critics erupted in praise for its heart-wrenching depiction of a Korean immigrant family struggling to make ends meet in rural Arkansas. It felt like Asian and Asian American narratives were being somewhat romanticized, but also deservingly celebrated. And I thought, Isn’t that better than negative attention? Isn’t that progress?

While I was quarantining back home in July, an Asian friend sent me a link to an ABC7NY article, her accompanying text reading, “Another.” I opened it apprehensively. It was about an elderly woman in New York City who had been attacked and set on fire by teenage boys. I was aware of the wave of anti-Asian sentiment caused by Covid-19, but was too distracted to feel anxious. I had been busy lapping up the love — the interest in Asia I perceived in pop culture and from peers. The image of this woman crushed my budding hope. There was a picture of her blouse, hanging empty, the back of it slashed, bloodstained, charred by flames. Her hair was wispy and gray. She was small and cheerful, with clear, round glasses and a black walking cane. She could be anyone’s grandmother; she could be anyone.

I felt deceived, but also stupid. Of course the West had been invested in the Asian aesthetic, but not Asian people. I always felt guilty for “using” my heritage to my own benefit, but maybe Asia-obsessed Americans had been doing exactly the same thing. Maybe just like me, they wanted to be hip, to be immersed in the foreign. But when it came down to it, their appreciation was for fictional characters, too hollow to guarantee the welfare of real individuals. The applause for “Minari” had been surface-level, superficial. It was the embrace of a story, not its protagonists.

I struggled with whether to proclaim my Asian heritage in a move of solidarity or to reject it for my own safety. But as panic in Asian communities mounted, I felt more Japanese than ever before. I was threatened beyond what I could register, what I could explain. Perhaps it was some survival instinct that drew me toward those who could relate to my fear. In the current context, it doesn’t matter that I am only part-Asian, or that I question how well I treat that aspect of my identity. My internal conflict is invisible and irrelevant to those who wish to harm or witness harm; to them, I am just another fucking Asian.

That day on the bus, I flicked my gaze around me, eyes silently seeking help. This was last March, and there were at least 20 of us crowded together. It was 5 p.m., rush hour, and everyone was so bundled in winter coats and hats that they became indistinct fuzzy shapes. A pregnant lady attempted to wedge a stroller with her kid in it next to the doors. Another slender woman rushed to her aid. I felt invisible. I knew the man’s remark had been loud enough to hear, but no one would look at me.

At the next stop, which wasn’t even mine, I steeled myself and rose calmly. I got off, stumbling past the stroller; behind me, the doors beeped, closed. The two red taillights of the bus disappeared into a flurry of snow. I took a gulping breath and consoled myself for a second, crouched over, hands on my knees. Then I rummaged in my backpack for a tissue to wipe the spit off my neck before it crystalized in the cold. I didn’t want it to solidify on my skin.