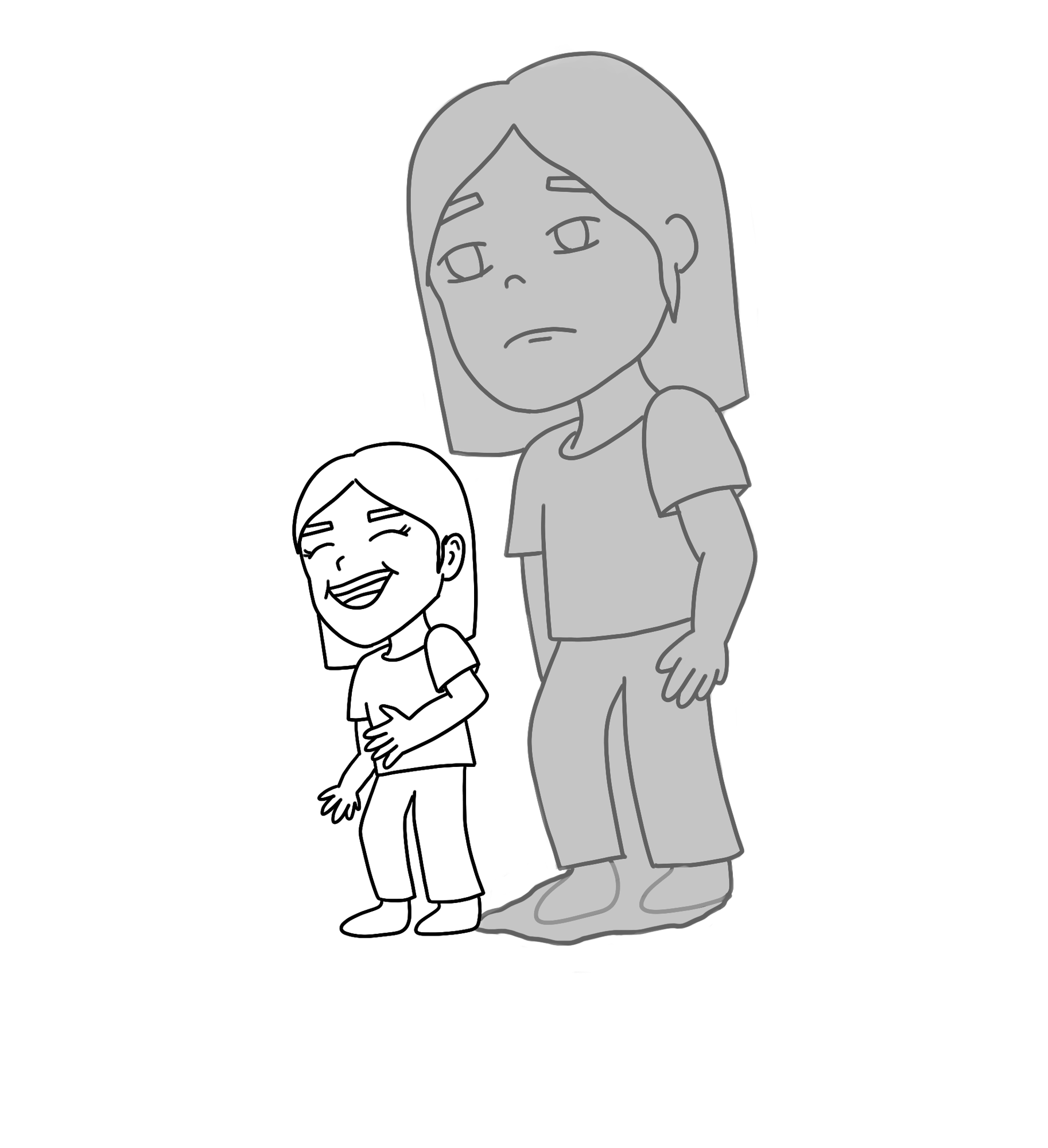 Does self-deprecating humor provide an important emotional and coping technique, or does it reinforce negative self-images and let us avoid deep reflection?
Advertisement
Advertisement

We are not all comedians, and we don’t all bear the same burden of trauma that Gadsby does, but her set made me realize that we are all capable of hurting ourselves through our remarks about ourselves, even when they are diffused by the intonation of a joke.
By Shelby N. Tzung

In her unassuming navy blue blazer, armed with nothing more than a microphone and a sparsely decorated stage, Hannah Gadsby, despite this modest assemblage, commanded the stage. Although “Nanette” is ostensibly a comedy special, Gadsby infuses her set with raw emotion and political rage. That combination earned “Nanette,” Gadsby’s comedy performance, widespread praise when it first premiered in 2018 and, three years later, I still can’t get it out of my head.

Her set begins usually enough, as she delivers one witty line after the other about her life as a lesbian in homophobic Tasmania and a woman in a male-dominated world. As is typical of comedy, even when discussing issues like homophobia and the patriarchy, she provides the audience with a buffer, twisting every anecdote into a punchline that we can feel comfortable enough to laugh at.

In describing her coming of age in Tasmania, an island state of Australia,in which homosexuality was criminalized until 1997, she satirizes the popular opinion of those around her saying in a gruff low voice, “Gays — why don’t you just pack your AIDS up into a suitcase there and fuck off to Mardi Gras?” This incites big laughs from the audience, and Gadsby chuckles, too.

She tells one story about a man who almost beat her up because he mistook her for a man “cracking onto his girlfriend,” quipping,“that part was true, actually.” She laughs as she continues with the story: this ignorant man began to shove her, but then stopped when he realized that Gadsby is a woman, swearing, “I don’t hit women.” Gadsby smirks at the audience, “What a guy.”

Many similarly biting jokes ensue, as Gadsby pokes fun at her struggles to identify with the lesbian community — “I don’t think I’m very good at gay” — and how she enjoys being mistaken for a man by service workers because, “just for a few moments, life gets a hell of a lot easier.” Throughout, Gadsby holds our hand through a plethora of troubling anecdotes, giving us the green light to experience them with her, but only through the comedic filter she provides.

But then she lets the other shoe drop with an unflinching declaration: “I have to quit comedy.” She explains that her career has been built off of self-deprecating humor and that she is no longer willing to make herself smaller in order to feel like she has the right to speak. In her words, when self-deprecation comes from someone who “already exists in the margins, it’s not humility — it’s humiliation.”

Her declaration is an implicit indictment of the audience. If you weren’t already on the edge of your seat holding onto her every word, you certainly are now. Because as soon as she decodes the sentiment which now compels her to leave the realm of comedy, you realize that you have been complicit in such self-humiliating humor for the past 20 minutes and likely are every other day as well.

I, like most audience members, cannot possibly understand the specific hardships that Gadsby has faced because of her marginalized identity, which include devastating incidents of physical and sexual abuse. Fifty minutes after telling the story about the man who “almost” beat her up, Gadsby shocks the audience with the truth that the man did in fact “beat the shit out of her,” attacking her when he realized that she was a gay woman. She explains how, in order for her to use that story as a joke, she couldn’t finish it. Instead, she had shared a filtered version of her truth and then let the audience revel in her humorous rendition of her traumatic experience.

But Gadsby is not interested in the audience’s pity. Nor is she under any illusion that her audience will miraculously be made up of thousands of people who share her very specific identity. Rather, her story is compelling because she uses the specificity of her experience to impart a universal message: We cannot continue to accept self-deprecating humor as a way of deflecting issues that demand serious contemplation. The marginality she describes is particular to her identity, but we all have our own “margins” in which we can entrap ourselves. When given the freedom to flourish, our insecurities and struggles can mutate into moats, isolating us from others. We may be able to shout across the water, but genuine connection is lacking. Humor, although it can sometimes function as a bridge, can serve to widen this divide.

Most people I know have go-to lines about themselves that they turn to in times of duress. Personally, when I am in an emotional trough, I often rely on off-colored comments about my inability to open up to others, comparing myself to a hermit or a robot. Such lines are my way of expressing to others that I am in pain, but because I express the sentiment as jokes, the recipients of such comments can’t do much more than laugh along with me.

That isn’t to say that humor isn’t valuable. It brings people together through the catharsis of laughter and can allow us to open up to each other. Chelsea E. Boccagno, a Ph.D. candidate in psychology at Harvard who studies identity malleability, explains that identity exploration can actually be aided greatly by self-deprecating humor “as a way to better understand and cope with who we are.” It can provide a framework for approaching topics that are otherwise too difficult to address.

But she notes that there is also a danger that excessive self-deprecation can “alter our sense of who we are,” as repetition of negative lines about ourselves can ingrain those ideas into our identities. Therapists will sometimes encourage self-deprecating humor as an emotion regulation technique, but without the proper channels to dissect such comments after they are made, they might only serve to reinforce negative ideas about oneself.

I’m always careful to frame my jokes in a way to avoid allowing for more serious discussion of the issues I’m raising, so I’m often guilty of using self-deprecation as a deflector rather than a bridge. Just as Gadsby built her career on making self-harming jokes from atop a stage where there was no follow-up discussion to be had, I almost always ensure that my comments can’t lead to any post hoc conversation. Having a ready-to-go joke about yourself is an easier way of coping with internal problems than genuine self-reflection or therapy.

One of my closest friends openly labels himself a champion of self-deprecating humor. He can casually throw a line into virtually any conversation to diffuse tension and give people a laugh at his own expense. Most recently, his favorite way to finish off a rant is, “You think you’ve had a shit year already and then, you know, you get hit by a car.” It shouldn’t really be funny because he actually was hit by a car a month ago, yet he can instantly flip the mood of the room by making this type of joke about himself. I admired him for this skill when I first met him, but as we got to know each other better, I began to realize that this charming ability wasn’t just a reflection of his deftness with words; rather, it served the dual purpose of putting people at ease while simultaneously disguising his self-doubts and insecurities.

One night, as we were casually debriefing about our day at work, he made one of his characteristic self-deprecating jokes, taking a crack at his own weight. His eyelids were slightly droopy from his second glass of wine, but I could still see clear as day the emotion behind his eyes straining to burst out. We were both professional dancers at the time, so his insecurity about his body was more than self-inflicted — we could be fired if we didn’t maintain the weight desired by our directors.

At this point, my memory is a little fuzzy about what the specific comment was, given that he has made so many similar comments, but the joke itself is irrelevant. Because, by now, I know that the attempt at humor was really an expression of a profound insecurity of his. That night, after he made his joke, I decided to ask him pointedly if he wanted to talk about the issue more seriously. Our relationship had long had an underlying understanding that we both struggled with body image insecurity, but he and I had incompatible approaches to tackling this issue. I chose to never mention the topic, terrified that if it came up, I would have to admit to myself and others how much I hated my own body. He took a seemingly opposite approach, choosing to constantly make jokes about his weight and body type, but one which had the same effect: to deflect real conversations about the topic and to hide pain behind a joke and a laugh.

That hidden pain is why Gadsby ultimately asserts that she must quit comedy. She built her career off of making light of her own trauma, inappropriately relegating her experiences to the punchlines of jokes. We are not all comedians, and we don’t all bear the same burden of trauma that Gadsby does, but her set made me realize that we are all capable of hurting ourselves through our remarks about ourselves, even when they are diffused by the intonation of a joke.

Gadsby’s story is an exceptional one, but since watching “Nanette,” even the most mundane examples of self-degrading rhetoric prompt me to more seriously consider the ramifications of something as seemingly benign as a one-line joke. When I gave my friend space to relinquish the self-deprecatory armor he had been wearing for so long, the floodgates opened and our relationship suddenly became that much stronger because we were honest. I still find self-deprecating humor to be a sociable and charming way of relating to others, but it also toes the line between humility and humiliation, a balancing act that I’m straining to reconcile in conversations with friends and reflections on my own self-expression.