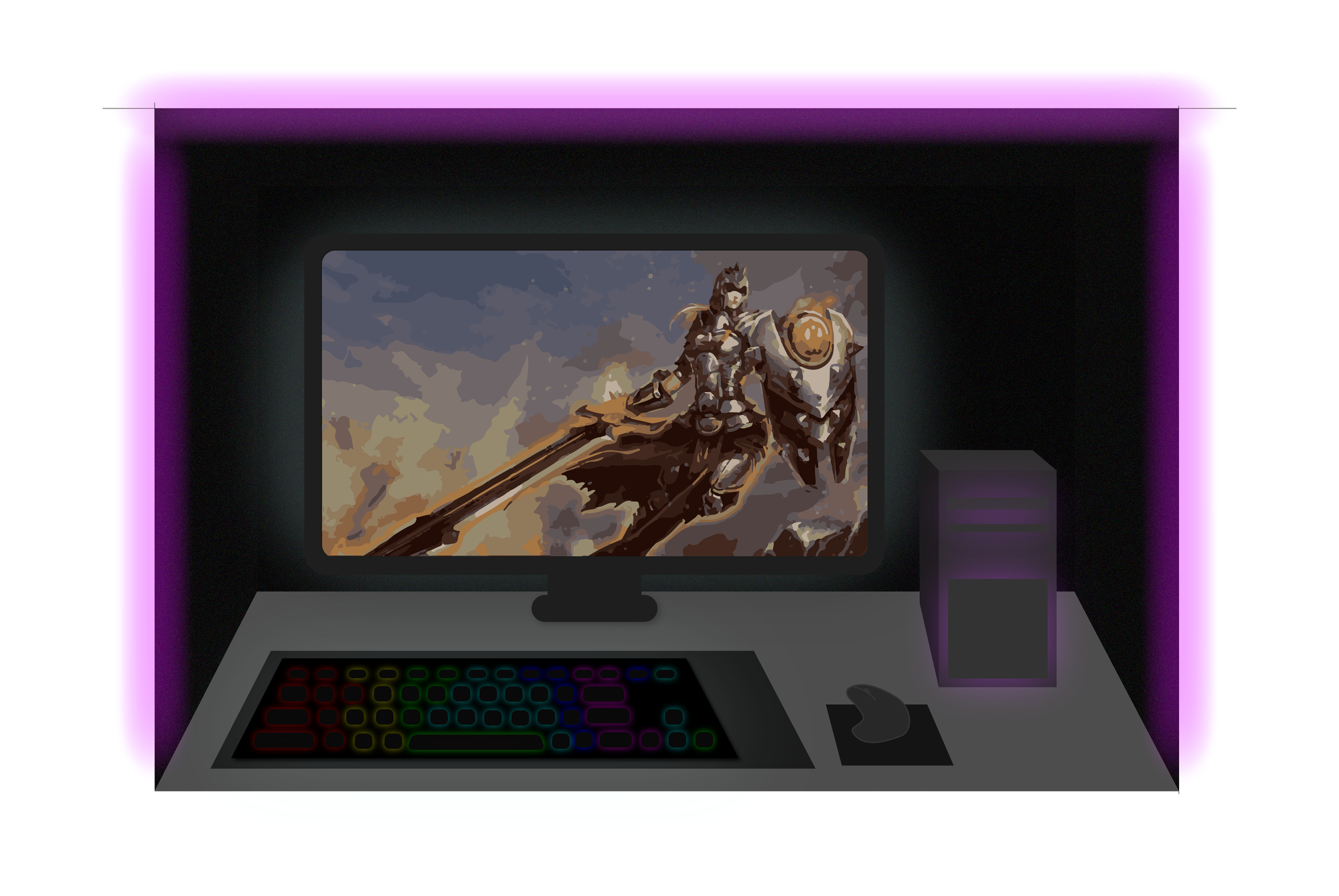 Adventures on the Rift

We played as the sun set and the sky split into pink and yellow, the room awash in gold. We played as the lamps turned on and the rooms around us quieted down to rest. When I went to bed that night, still giddy, I saw the graphics imprinted behind my eyelids, just as vibrant and animated as they’d been on screen.
By Vicki Xu

I keep an eye on my Facebook messages starting at around 7:30 p.m. every night, because that’s usually when my friend Nathan logs on. Our chat history looks something like this, but exponentiated:

If any schoolwork or extracurricular tasks are left on my schedule, I’m not getting them done tonight. I hop onto the Discord server, boot up the League of Legends game interface, and prepare for a string of games to end the day.

The summer after high school, I flew to a resort in Washington, D.C. for an engineering competition. The competition was held in an airy convention center with indoor waterfalls and shrubbery, so the air always smelled a bit humid. Indoor street lamps lined cobblestone walkways in the shopping and eating area, giving the impression of a quaint little downtown rather than a hotel with a hodgepodge of chain restaurants and expensive gift shops.

My team consisted of seven boys, and me. Our rooms were on the 12th floor, offering a fantastic view of the National Harbor. The competition was structured so that we had a couple of days between the opening ceremony and our presentation to the judges. We spent these days lounging in the hotel room, supposedly practicing our presentation but mostly fooling around. Occasionally, we’d look outside and point out to each other how blue the sea or the sky was. We ordered fast food, built forts, and conducted pillow fights: a handful of graduated seniors holding onto the sweet last bits of high school.

At some point, my teammate Anthony hooked up his new laptop to the TV, ostensibly so we could see our PowerPoint in HD. But soon we were too busy cooing over the sharp TV graphics and the laptop CPU to focus at all; we instead found ourselves watching the 2019 League of Legends Championship Series Summer Split on the 48-inch screen.

League of Legends is a massive multiplayer online battle arena in which players are matched into teams of five based on their skill ranking. Teams compete against one another on a battlefield called Summoner’s Rift. Each player chooses one avatar, called a champion, to control — as of 2020, there are more than 150 champions, each with unique abilities and playstyles. The goal is to take the enemy team’s home base, which is protected by castle structures called turrets.

The square-shaped arena is divided into three lanes: one along the left and top edges, one along the bottom and right edges, and one cutting through the middle from the bottom left corner to the top right of the map. Creatures called minions, generated by each team’s home base, creep along the lanes. A river bisects the middle lane, and the rest of the space is filled with a shadowy, swirling maze of paths, trees, and monsters — the jungle.

Champions level up and gain stats throughout the game. This can be sped up by killing neutral monsters in the jungle and the enemy team’s minions in the lanes, then using the income to buy items in the shop to strengthen your champion. Killing enemy players also provides income. While an unlimited amount of deaths are allowed, respawn timers get longer the further the game drags on. This was my first time watching the game in action.

“Holy shit,” breathed Anthony, when a little figure on the screen detonated a blast that chunked down the health bars of four other characters.

A couple minutes later, a fight in the bottom right portion of the map drew exclamations from the boys. “Vlad had to TP there,” Drake commented. “Otherwise there’s just no way. Shen’s pushing too hard on botside. Now Kai’sa’s fed.”

“Do you guys know what they all do?” one of the boys who didn’t play League asked, referring to each champion’s specific abilities.

“Yeah,” Anthony and Drake said at the same time. They looked at each other.

“Nothing to be ashamed of, boys,” Jonathan said.

I started playing League a couple of hours later. The League Championship Series games had fueled the boys’ desires for their own Summoner’s Rift glory, and they set up on the coffee table, pulled out their wireless mice, and booted up their clients. I joined them partly out of curiosity, but mostly because I wanted to get closer to them and didn’t quite know how to communicate the desire. Throughout high school I’d intermittently found people interesting and wished to know them better, but it wasn’t until close to graduation that I realized I was seriously running out of time. I didn’t want another such chance to slip through my fingers.

At the very least, I’d understand the League jargon.

“Can I learn from anyone?” I asked.

“Don’t die too much,” Drake offered helpfully from the sofa, where he, Anthony, and Abhi had set up shop.

After a couple of matches against bots where I spun around the map as Garen, I leveled up my account enough to be able to join the games the rest of the boys were playing. The PowerPoint was left unrehearsed for the day.

We played as the sun set and the sky split into pink and yellow, the room awash in gold. We played as the lamps turned on and the rooms around us quieted down to rest. When I went to bed that night, still giddy, I saw the graphics imprinted behind my eyelids, just as vibrant and animated as they’d been on screen.

The next day, after we actually practiced our presentation, we played again, and more the day after that.

It might’ve been a little unproductive, cooped up in a hotel room playing League when we could’ve been using our free time to explore the nation’s capital (we did, a little) or meet new people (we didn’t). This wasn’t really important, though. None of us voiced it, but we all felt that these might well be the last few moments that we spent with each other. As far as we knew, we were shooting toward the end of an era.

League games are 30-minute retreats from reality. Since there are so many moving parts, for most people it’s pretty hard to not concentrate in game. We focused on our champions, on teamfights, on macro strategy. In those days, we channeled our energy into the game — more tangible than the big, looming future.

That summer, after we returned from the competition, we went to each other’s homes twice a week to play League. These sessions extended well into the night, sometimes to 2 a.m. or later, in which case I, having no driver’s license, would have to hitch a ride home with a friend. Of course, League could be done remotely. It’s a video game. But being in the same room with Jonathan as he bellows “LET’S GO” at a particularly sick play, or watching Drake leap up and crab-walk around the table for a victory lap — no substitutes exist for that.

Going to someone’s house is now out of the question. So as quarantine drags into month twelve, I log on to League of Legends almost every night. Queuing up with friends miles away, their yells mingling with in-game sound effects right in my ear, lets us share the magical sensation of being somewhere else entirely.