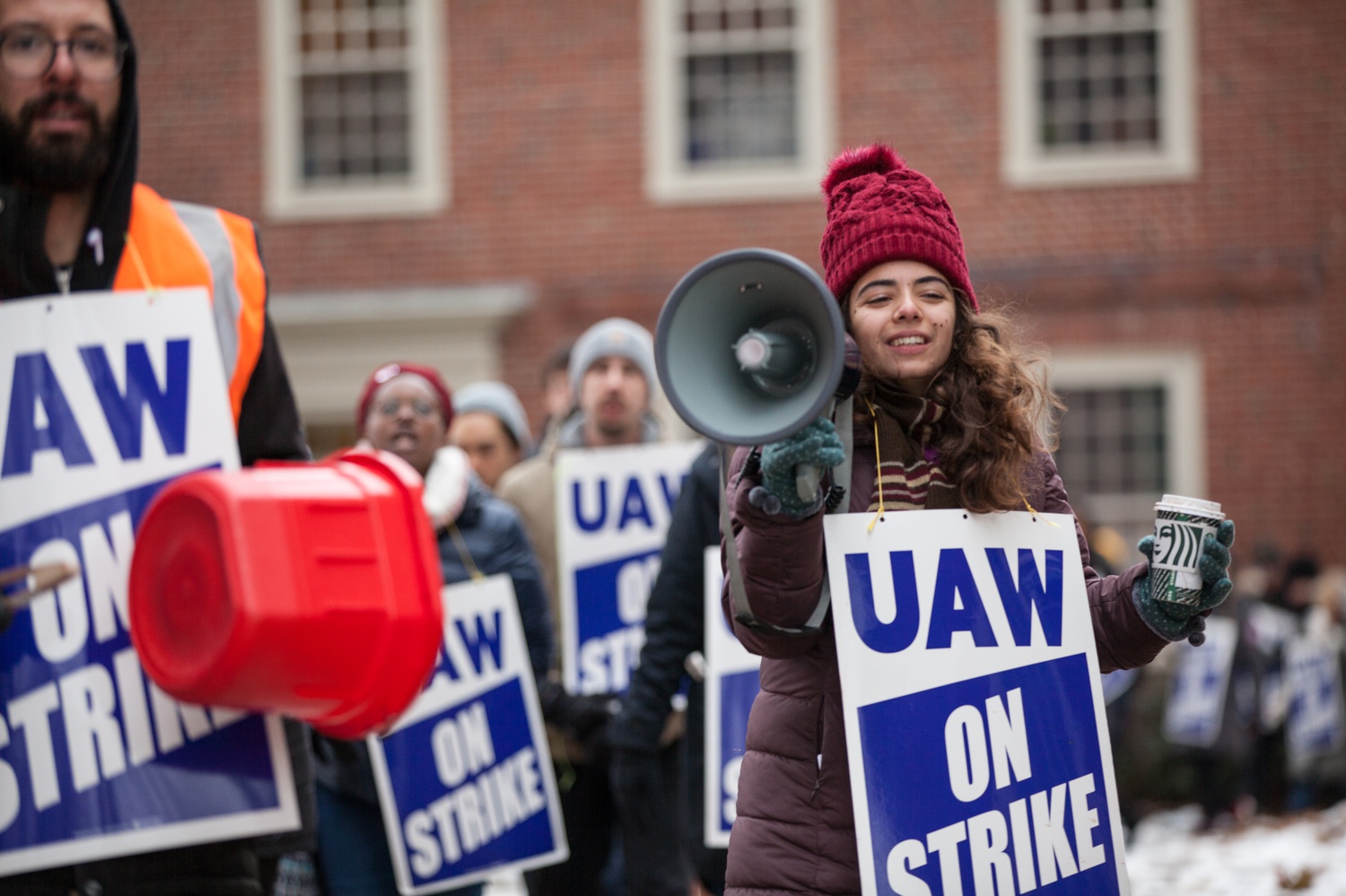 In December 2019, HGSU-UAW went on strike for four weeks in a bid to secure its first contract, ultimately moving to mediation and ratifying a one-year contract in July 2020. By Kai R. McNamee
By Cara J. Chang and Meimei Xu, Crimson Staff Writers

Harvard’s graduate student union delivered a letter to University administrators Thursday morning signed by more than 500 graduate students pledging to organize a strike if contract negotiations between Harvard and the union are not resolved by June 30.

“We hope that Harvard will join us in reaching an agreement and avoid a strike, but we cannot accept an agreement that does not improve living conditions and working standards for all of us,” the letter states. “We are writing to inform you that if Harvard continues to reject essential improvements and protections, [Harvard Graduate Students Union-United Automobile Workers] will hold a strike authorization vote.”

The letter outlines several core demands, all longstanding points of contention between the union and the University: compensation, health care coverage, union security, and third-party recourse for discrimination, harassment, and retaliation cases. If these demands are not met in an agreement by June 30, the signatories of the letter — which includes all members of the union’s Executive Board and the Bargaining Committee — will move to organize a strike vote.

In December 2019, HGSU-UAW went on strike for four weeks in a bid to secure its first contract, ultimately moving to mediation and ratifying a one-year contract in July 2020.

The union and the University began bargaining for their second contract in March. After 13 bargaining sessions, the two parties have not reached tentative agreements on any of the core issues identified in the union’s letter.

With less than a week before the current contract expires on June 30, HGSU-UAW and the University have two more bargaining sessions scheduled for June 28 and 30.

At the latest bargaining session on Thursday, HGSU-UAW member Kai Morsink read a short statement explaining why he signed the letter.

“We’ve told you what it’s like to try and make ends meet on our stipends when inflation and rent in Cambridge keep going up and we’re trying to pay for an unexpected dental bill or support a family member,” Morsink said at the meeting. “We’ve told you what it’s like to be dismissed and undermined and told to wait when we bring our harassment cases through a Harvard process that hardly ever produces any consequences for abuse of power.”

Harvard spokesperson Jason A. Newton wrote in an emailed statement that the University will continue to negotiate “in good faith” with the union in the next two sessions and the smaller working groups the union and University set up to handle specific issues.

“The University is disappointed to see the Union raise the prospect of a strike at this stage, but we will continue in good faith to work towards an agreement,” he wrote.

At the meeting, Morsink said the letter is the union’s “bottom line,” and he hopes that it will pressure the University to accept their demands.

“I want them to come back and say, ‘Yes, we built it into the contracts: union shop, living wage, health care coverage, real recourse,’” Morsink said in an interview. “And then I want us to sign that contract and I want us to not have to worry about this anymore, at least for a little while.”

“On the administration side, I hope they see we’re serious about wanting to improve our contract for this upcoming year,” he said.

Torres added that he hopes the letter will give membership “a bit of a morale boost” knowing that the union will continue to fight for increased compensation and benefits.

“They say they feel the urgency, but in practice, we don’t see that,” Gopalan said. “We’re expecting the contract to expire and then for negotiations to continue, and if there isn’t real movement, we are going to try to organize towards a strike authorization vote.”

Morsink said he is uncertain of what effect the letter will have, but that students will continue to advocate for the union’s proposals.

“The real answer to how this looks is, ‘I don’t know,’” Morsink said. “I just know that this is worth it to me and 500-plus other student workers to strike if Harvard doesn’t meet these demands.”