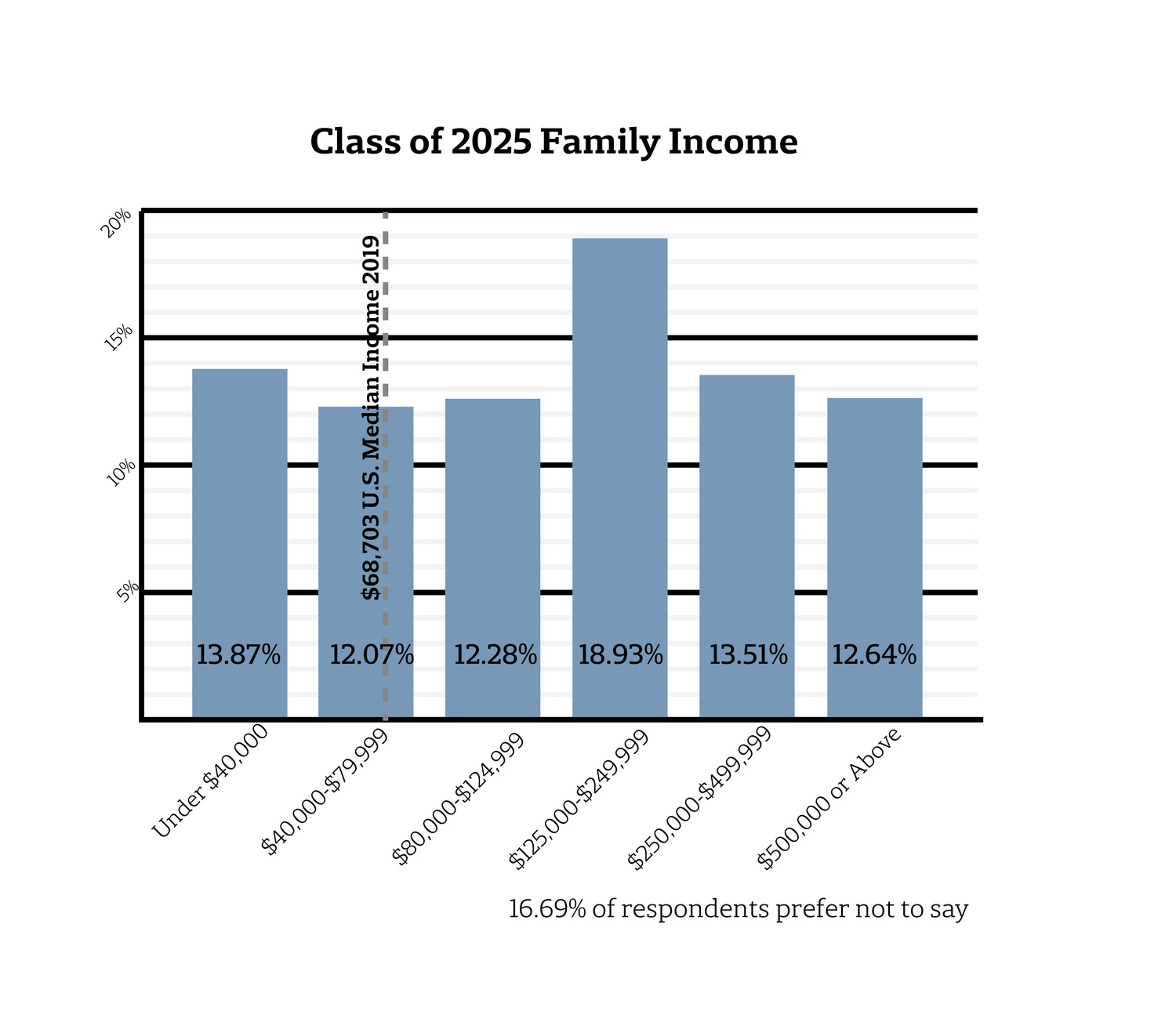 Though they are starting their college careers amid a pandemic that shows no sign of abating, in other ways the Class of 2025 is similar to classes that came before it. By Matthew J. Tyler
By Alex Koller and Eric Yan, Crimson Staff Writers

This is Part I of our Freshman Survey series. Parts II, III, and IV will be released later this week, along with full data and visualizations.

After making it through the most competitive admissions cycle in Harvard College history, the Class of 2025 received more good news: Harvard was inviting incoming freshmen to campus in the fall along with the rest of the student body.

The College announced in May a full return to in-person learning and residential life this semester — for the first time since the onset of the pandemic in March 2020. To accommodate a record-high number of students accepted to the Class of 2024 who deferred their enrollment, the College is using Harvard-affiliated swing housing in 1201 Mass. Ave. and apartments on Prescott Street. Freshmen living in these accommodations are affiliated with the newly formed Maple Yard.

Still, the pandemic remains a reality of daily life at Harvard.

Students are required to receive the Covid-19 vaccine — unless falling under religious and medical exceptions — and are subject to an indoor mask mandate and regular viral testing. Even with those measures, Harvard increased testing requirements for undergraduates in response to a steep rise in cases after only three days of classes.

Though they are starting their college careers amid a pandemic that shows no sign of abating, in other ways the Class of 2025 is similar to classes that came before it.

The students are relatively wealthy compared to the general U.S. population and tend to hail from suburbs and the northeast U.S. Roughly 26 percent of members of the Class of 2025 who answered a question about parental income in The Crimson’s annual freshman survey said their families make $250,000 or more per year — earnings higher than 94 percent of American households.

Consistent with previous years, more student respondents identified as white than any other racial demographic. The Class of 2025 roughly matched last year’s all-time high for percentage of students who identify as Hispanic or Latinx and Black or African American.

As freshmen adjusted to their new lives at Harvard, roughly 78 percent of them responded to a Crimson email questionnaire about their backgrounds, beliefs, lifestyles, and experiences during the coronavirus pandemic. The anonymous survey explores topics ranging from political ideology to sexual experience to Covid-19’s impact on their mental health. Of 1,965 students comprising the Class of 2025, 1,537 freshmen responded. The Crimson did not account for potential selection bias in its analysis of the results. Due to rounding, reported statistics may not total exactly 100 percent.

The opening segment of The Crimson’s four-part introduction to the Class of 2025 examines the demographic profile of this year’s freshmen, considering factors like gender, ethnicity, and socioeconomic status.

In keeping with previous classes, this year’s freshmen are largely affluent, white, straight, and from the country’s coastal regions.

Of participants who answered a question about ethnicity, 53.1 percent identified as white, 23.6 percent as Asian, 15.7 percent as Black or African American, 13.4 percent as Hispanic or Latinx, 8.3 percent as South Asian, 0.9 percent as American Indian or Alaska Native, and 0.6 percent as Pacific Islander.

Roughly 71.1 percent of surveyed freshmen said they identify as straight, 12.5 percent as bisexual, 7.1 percent as gay or lesbian, and 2 percent as some other sexual identity. About 5.4 percent indicated that they are questioning their sexual orientation.

Of the students who do not identify as heterosexual, 60.5 percent said they have not yet come out.

Roughly 16.2 percent of respondents said they come from outside the U.S. and its territories, marking an increase from the 10.8 percent who reported international residency in the Class of 2024.

The number of students who reported coming from urban, suburban, and rural areas remained consistent with previous freshman classes. A majority of surveyed students — 56.7 percent — said they hail from suburbs, while just 9.4 percent share rural origins. Students coming from urban areas made up 33.9 percent of respondents.

Almost half of respondents — 45.1 percent — reported that their parents make a combined annual income of more than $125,000 — nearly twice the median household income in the U.S.

Consistent with data from previous classes, students’ family wealth largely correlated with their ethnic background. Only 8.4 percent of white freshmen reported that the combined income of their parents was under $40,000 — the smallest fraction of any demographic. Students of color were significantly more likely to report a family income in that bracket: 29.4 percent of Hispanic or Latinx students, 19.5 percent of Black or African American students, and 13.5 percent of Asian students reported their parents make less than $40,000 annually.

The percentage of students reporting legacy status, defined as having one or more parents who attended Harvard College, rose slightly to 15.5 percent from 12.0 percent in last year’s freshman class.

The percentage of freshmen who described themselves as first in their family to attend college also fell slightly to 20.0 percent from last year’s high of 22.8 percent.

An overwhelming majority — 90.7 percent — of first-generation students receive some form of financial aid from Harvard.

The Path to Harvard

Members of the Class of 2025 who secured their place at Harvard College this year overcame a historically competitive admissions cycle, which saw a record-high number of applicants.

This year, the College’s acceptance rate — 3.43 percent — dropped below the previous record-low 4.50 percent of applicants admitted to the Class of 2023. A record-high 57,435 applicants vied for a spot at the College this year, exceeding the previous record of 43,330 individuals who applied to the Class of 2023. The influx of applications forced the Admissions Office to postpone its decision release date.

Adding to the list of firsts, a record-high 85 percent of admits accepted their offers of admission to the College this year, surpassing the previous record held by the Class of 2021 by 1 percentage point. They join more than 340 Class of 2024 admits who deferred to the Class of 2025 last year — a significantly larger number of deferrals than in typical years. Combined, this year’s freshman class totals a historic 1,965 students.

Harvard was the top-choice college for an overwhelming majority — 78.8 percent — of surveyed freshmen.

One-fifth of respondents reported receiving help from a privately hired counselor while preparing college applications, consistent with previous years. Of these students, 48.9 percent of those who disclosed their parents’ financial status reported a combined family income of $250,000 or more; 9.8 percent reported a parental income of less than $40,000.

About 66 percent of respondents attended secondary schools that calculated class rank. Of these students, 73.1 percent reported they graduated among the top 2 percent of students in their graduating classes.

Slightly more than 46 percent of students also applied to Yale. Among these students, 35.6 percent were accepted to the New Haven university.