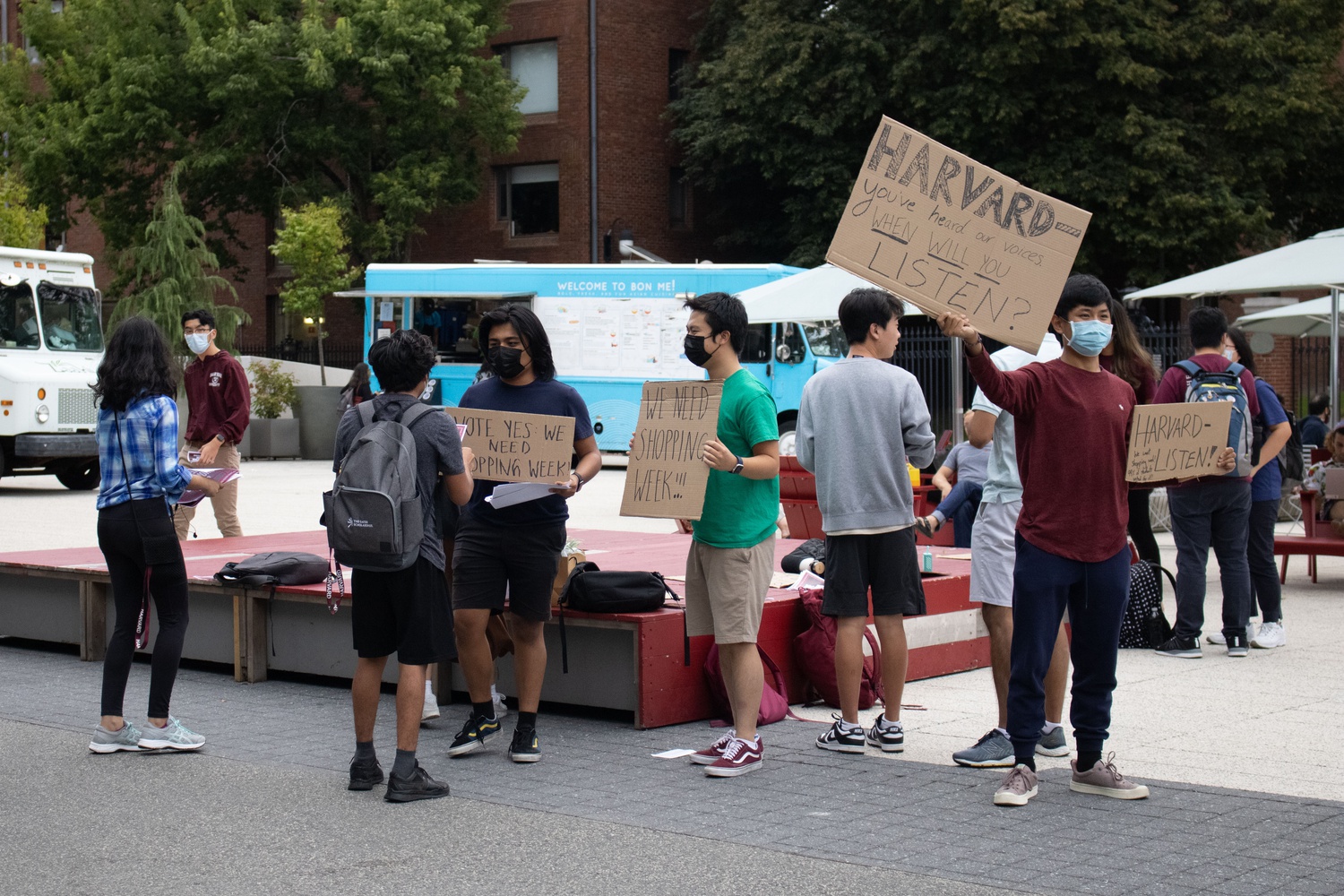 Students hold signs at a rally in support of shopping week on Tuesday. By Pei Chao Zhuo
By Meimei Xu, Crimson Staff Writer

After Harvard undergraduates voted 96.46 percent in favor of an Undergraduate Council referendum on shopping week, teaching fellows explained in interviews the stress that shopping week causes them due to fluctuating student enrollment.

Earlier this month, a petition gained more than 1,300 signatures in support of shopping week, the system in which students browse courses the first week of class before registering. Students rallied to preserve shopping week last Tuesday, marking the first day of voting in the referendum.

Shopping week and “uncertain schedules” for teaching fellows and faculty have been a subject of debate for several years. Throughout 2018, the Faculty of Arts and Sciences' administrators, faculty, and students debated the potential elimination of shopping week; later that year, Dean of Undergraduate Education Amanda J. Claybaugh proposed a pre-registration system as a replacement. In 2019, the FAS voted to retain shopping week until at least 2022.

Though teaching fellows said they understand the appeal of the system — which allows undergraduates relative freedom in course selection — several teachers raised concerns in interviews about the resulting unpredictability of schedules and teaching positions.

Aparna Gopalan, a teaching fellow in the Anthropology department, said graduate students who cannot make major financial decisions ahead of time have to face the “hidden cost” of shopping week.

“Do I need to buy or rent a car?” she said. “Where do I rent an apartment? Should I rent in Cambridge, or should I not rent in Cambridge and live in the other location where I've always lived, because people, they all depend on a schedule, and I don't know my schedule.”

Due to fluctuations in student enrollment, Gopalan said her first teaching appointment in 2019 was not finalized until approximately three weeks into the semester. She said she was assigned a section that evening and had no time to prepare properly.

“After the semester ended, my students wrote in my course evaluations that the TF came unprepared on the first day, and that's part of my employment record for my whole life,” she said.

Ege Yumusak ’16, a teaching fellow in the Philosophy department, criticized the University for not prioritizing student workers' job security.

“We find ourselves scrambling to rearrange sections and make sure that people are employed during this time, but our experiences of tumult and stress are solely a function of Harvard administration refusing to give appointment security to student workers,” Yumusak said.

On Monday, Provost Alan M. Garber ’76 sent an email updating Harvard affiliates on the University’s contract negotiations with Harvard Graduate Students Union-United Automobile Workers, including the University’s tentative agreement with the union to pay teaching fellows with cancelled courses 70 percent of what they would have received for teaching the course, triple the original percentage of compensation.

Abigail Orrick, a teaching fellow pursuing an education Ph.D. who also teaches undergraduates in one of her courses, said she would prefer a system that allows students to explore classes freely while also providing enough time for teaching fellows to plan ahead.

“It seems like a system that really, really benefits the undergrads that makes TFs feel financially unstable and very stressed isn't good, and a system that helps TFs and instructors not feel stressed but makes undergraduates feel like they can't choose their courses well isn't that good either,” Orrick said. “What other solution could we potentially create all together?”