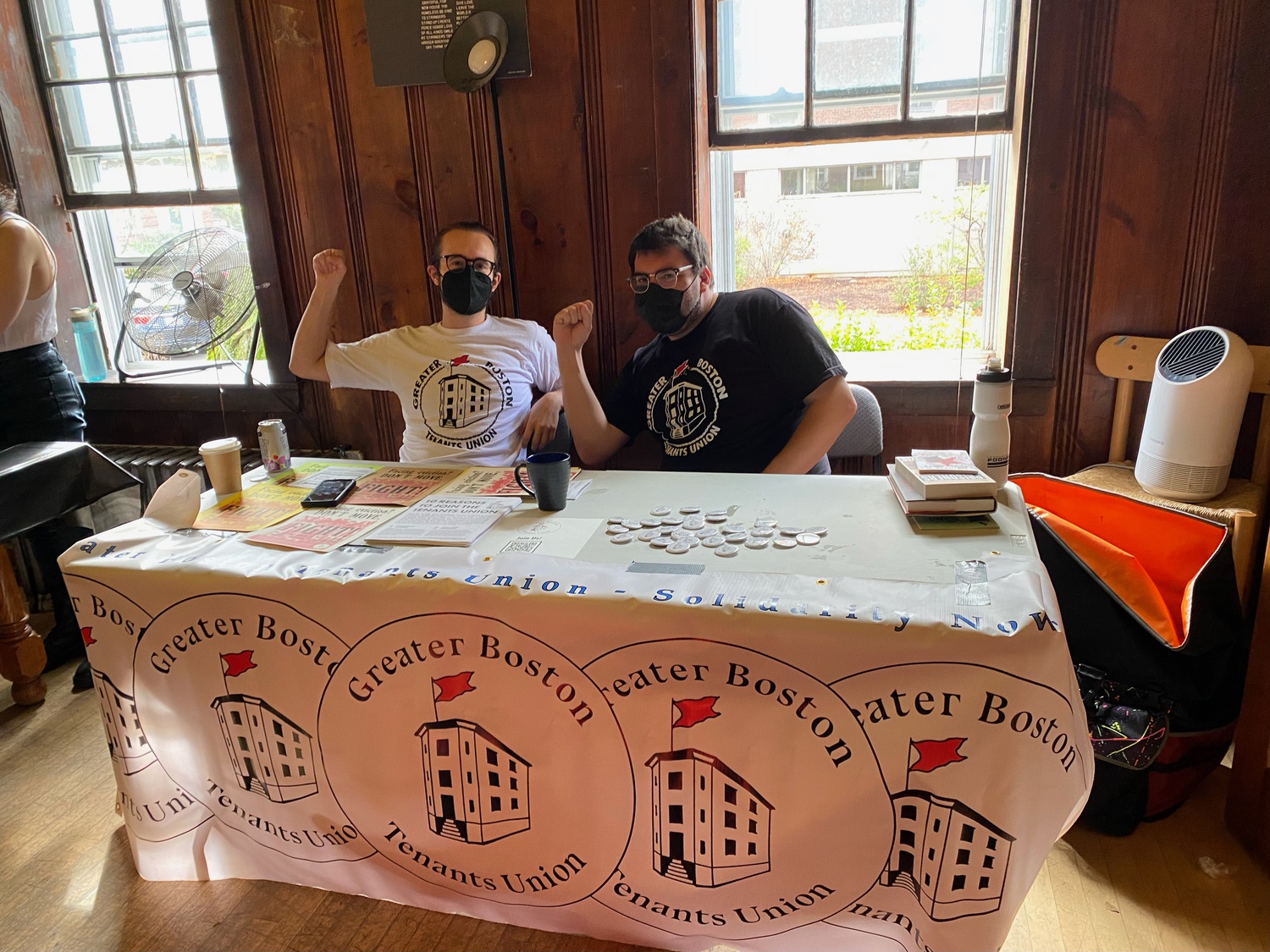 The Democracy Center hosted the Boston Anarchist Book Fair — where, unlike Harvard, there aren’t classmates or faculty but ‘comrades,’ where the ambition isn’t to go work in the big banks but to destroy them.
By Sazi Bongwe

“CAPITALISM IS A PYRAMID SCHEME.”

“THERE’S NO SUCH THING AS A REVOLUTIONARY GOVERNMENT.”

“TO CHANGE ANYTHING, START EVERYWHERE.”

Such phrases line the dimly lit interior of the Democracy Center, a meetinghouse for activists and organizers located in Cambridge. While only a stone’s throw away from Adams House, the space feels completely foreign to anything at Harvard — there aren’t classmates or faculty but instead ‘comrades’; the prevailing dress code isn’t navy-blue suits but raised-fist T-shirts and an array of hair colors and piercing styles; and the ambition isn’t to work for the big banks but to destroy them.

On a suspiciously warm November weekend,, the Democracy Center was home to the Boston Anarchist Book Fair, which event organizer Brian Moen describes as “a bunch of anarchists and anarchist-adjacent people coming together to build solidarity.”

Walking through the fair, almost all of the slogans encouraged disrupting the order in one way or another — phrases like “don’t cling to the old world!” “abolish the police!” and “revolt!” line the posters and pamphlets — to the extent that the relative tranquility of a book fair seemed almost paradoxical.

“So anarchists are known for doing book fairs. It’s kind of a joke,” Moen explains. “What does a Marxist do? Well, they’ve staged a lot of revolutions. What do anarchists do? Book fairs.” 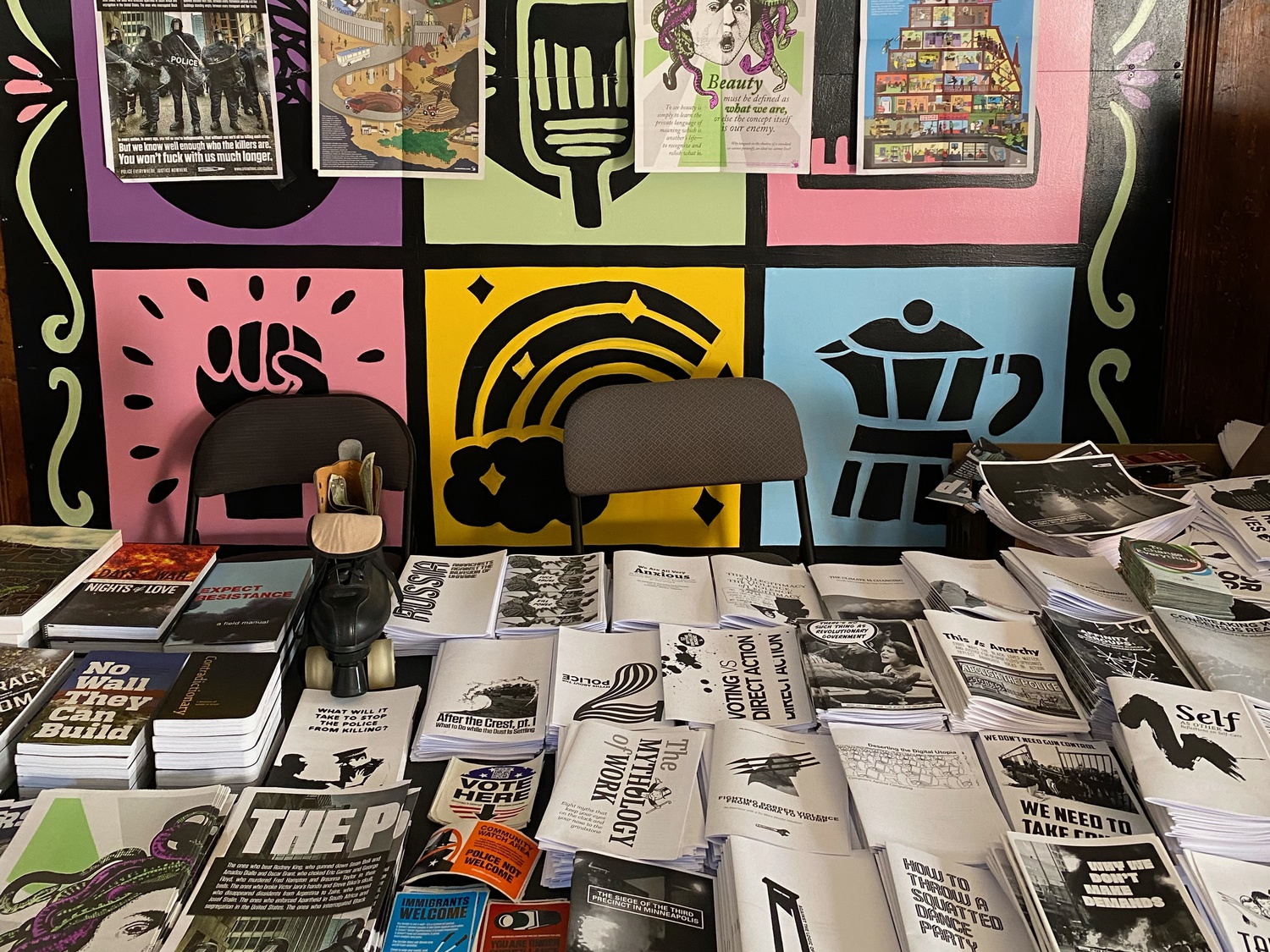 Posters and pamphlets at the Boston Anarchist Book Fair. By Sazi Bongwe
Advertisement

While the Democracy Center is unaffiliated with Harvard, its proximity to Harvard’s campus begs the question of how elite educational institutions fit into the anarchist equation.

Several of the organizations at the fair recounted protesting in solidarity with the Harvard Graduate Students Union. Alanis Mystif, a member of CrimethInc., described on its website as a “decentralized network pledged to anonymous collective action,” calls on universities like Harvard to reckon with their position of privilege.

“Anarchists also believe that the point isn’t to make a better elite higher education, but rather to figure out how to horizontally redistribute all the resources that are concentrated in places like this, so that they can benefit everybody,” says Mystif.

Mystif also lauds the efforts of the people within those universities who push their institutions to broaden their outreach.

“Universities often have very extractive relationships to the communities that they live in,” says Mystif. “Yet at the same time, people on the margins of these universities also turn that upside down and use the resources of the university to funnel outwards to community projects, collective endeavors.”

Mystif’s organization, CrimethInc., springs from the belief that “the most compassionate way for us to live our lives is to devote ourselves completely to the struggle against all forms of authority and domination,” he says.

In this vein, the organizations at the book fair have no central leader or authoritative structure. Each time I asked book fair goers about their respective roles, I was met with a blank look, an eerie silence, and some variation of the same answer: “Everything is democratically run,” as Nick Watter from the Greater Boston Tenants Union put it.

“There is no leader or anything like that. There’s no board, no executive director that makes the profits,” he adds. “It's all tenant run.”

The planning of the fair ran similarly, according to Moen.

“We have a great collective. We work by consensus and by figuring everything out together,” he says. “We don’t use voting.”

Despite the collective’s choice to avoid voting, Mystif dispels the myth that anarchists don’t see value in political engagement at large. “What we try to do is promote the idea that you don't have to wait once every four years to participate politically,” he says. “There's actually ways to participate every single day.”

In Mystif’s view, the book fair acts as both an opportunity for connection and solidarity among anarchists, as well as a rallying cry for those who don’t yet associate with the term — such as family, in Mystif’s case.

“I find that when I talk with people, when I talk to my mom, we tend to find that we share a lot of values. We just don't necessarily take them to the same conclusions,” he says. “The sorts of things that we’re talking about — a world free of hierarchy and domination, horizontal organizing, care for all people, respect across lines of difference — are pretty good, widely shared values.”

The only difference, as he puts it, is that “anarchists have an interesting and provocative hypothesis about what we should do as a result of those values.”

Moen hopes that the book fair will “energize the left, energize anti-capitalist sentiments, bring people together, and remind people that anarchists are here and organizing.”