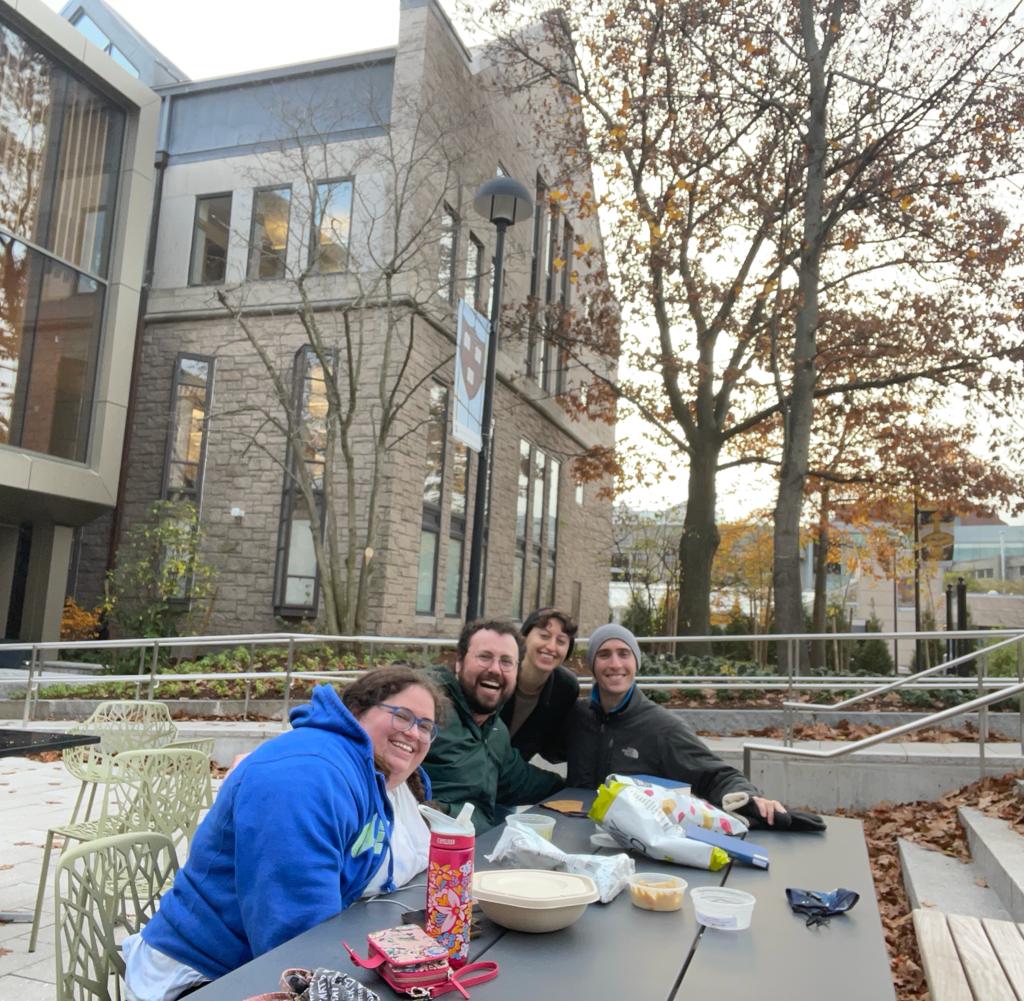 Meet Jews for Liberation, the HDS Student Group Bringing Politics and Spirituality Together

Jews for Liberation, a student organization composed primarily of Jewish students at Harvard Divinity School, describes itself in its Instagram bio as a “spiritual and political space for anti-Zionist and non-Zionist Jews at Harvard.”
By Ellie S. Klibaner-Schiff and Mariah M. Norman

Beneath the freshly turned red and yellow autumn leaves at Harvard Divinity School, Francesca Rubinson, a second-year HDS student, warmly recounts the Liberation Seder she attended on Passover last year. “That was just a really beautiful evening and meal together that I felt like we shared with lots of Jewish folks, and non Jewish folks who were attending their first Seder ever but were interested in learning what Jews for Liberation was all about,” Rubinson says.

Jews for Liberation, a student organization composed primarily of Jewish students at Harvard Divinity School, describes itself in its Instagram bio as a “spiritual and political space for anti-Zionist and non-Zionist Jews at Harvard.” S. Lovett-Graff founded the group last fall, seeking to fill a political gap on campus by specifically catering to those who they describe as having the most marginalized beliefs in Jewish organizations. Currently, the organization functions “primarily as a network to connect people with resources,” but “we are still building,” Lovett-Graff says. For now, their programming includes events that focus on Judaism, community building — like the Liberation Seder —, and political organizing.

For Rubinson, Jews for Liberation provided a space on campus that allowed her to explore aspects of her identity that other Jewish spaces didn’t always center. “While there were many lovely Jewish people at HDS who I enjoyed celebrating holidays and Shabbat and being in community with, I did also feel like that political activation piece was missing,” Rubinson says.

Without a space that catered to her specific values, Rubinson says she often struggled with being pigeon-holed into a political stance. “[There is a] tacit assumption of Zionism within Jewish spaces where that’s often considered the baseline or default position. And that can feel very alienating to people who either identify as anti-Zionist, non-Zionist, or even people who are questioning their relationship to Zionism,” she says.

One of Jews for Liberation’s major goals is to rally support for Palestinian solidarity efforts at Harvard. Most recently, they released a statement of support for the Palestine Solidarity Committee’s speaker event on Oct. 24 featuring Mohammed El-Kurd, a Palestinian writer and activist. His visit to campus stirred controversy and protest from Harvard Hillel and the Harvard Israel Initiative, which claim some of El-Kurd’s views are antisemitic.

But for Jews for Liberation, this show of solidarity felt natural, says Lovett-Graff, pointing out that some members of the group are also part of the Harvard College Palestine Solidarity Committee. “We have members who are actively interested in relationship building and doing deep relational work to see how we can best support in a solidarity role and in an education role, in terms of educating our own community on Palestinian solidarity work.”

Lovett-Graff believes that Jews for Liberation has a responsibility within wider solidarity efforts to help its own members dismantle what they describe as an internalized theology of Zionism. “We are offering up space for people to really deconstruct their own narratives and assumptions around Zionism with enormous grace and patience,” Lovett-Graff says. “I think it is the role of Jewish people to hold that space for other Jewish people so that this dismantling of internalized Zionism is not put on Palestinians.”

But doing the work other Jewish organizations and individuals are protesting against can come with a feeling of alienation. “I think, frankly, one of the biggest blocks to building a decolonial Judaism that is anti-Zionist and really confronts Zionism is isolation. It’s a feeling of being alone,” Lovett-Graff says.

They view the increased visibility that comes from the physical presence of Jews for Liberation on campus as an opportunity for deeper community-building. “I think that when people have a space to build relationships and acknowledge that they’re not alone, it can only support people in imagining what Judaism and what Jewish life on campus can look like,” Lovett-Graff says. 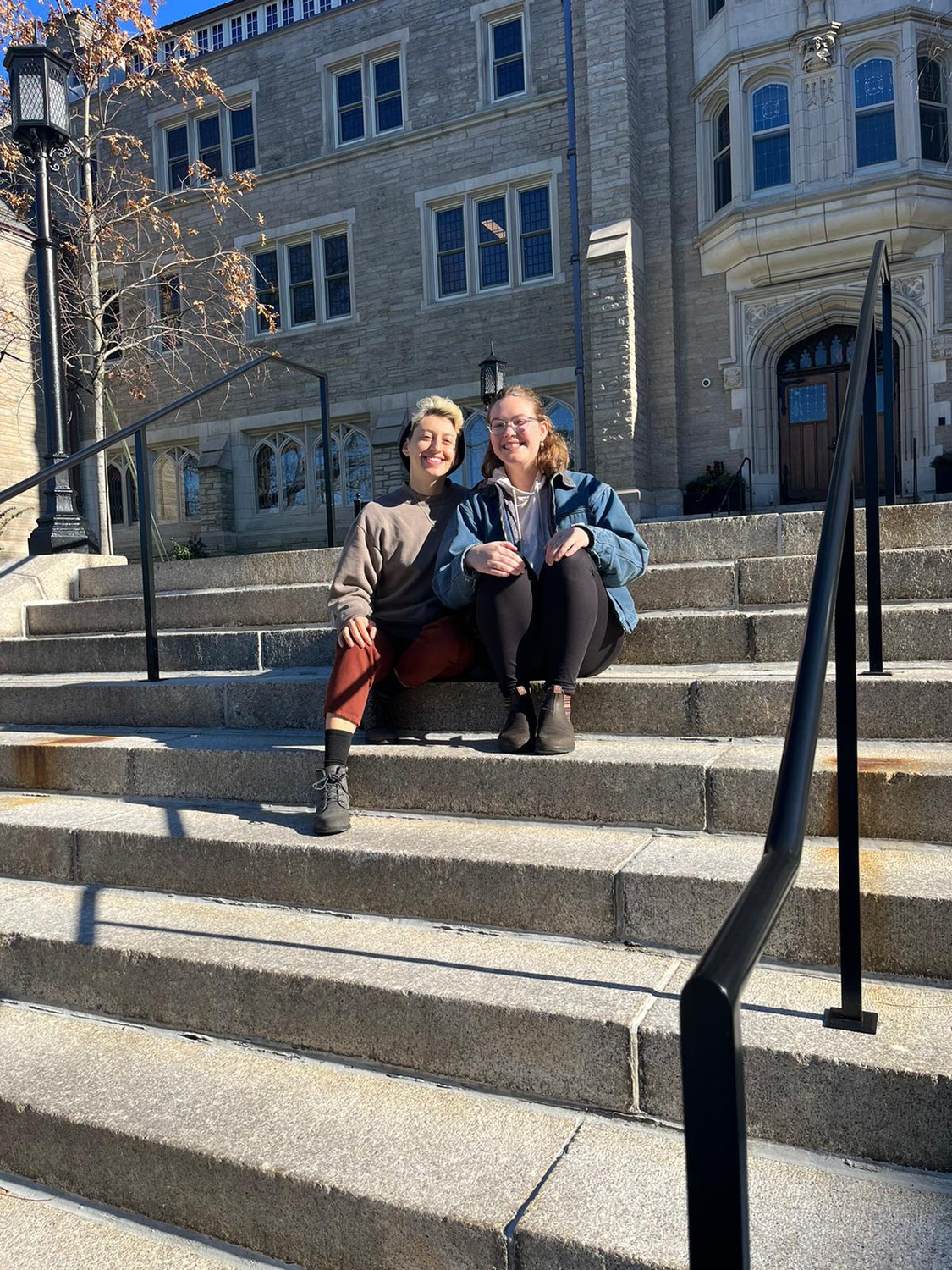 Within the web of varied Jewish spaces and political spaces on campus, Jews for Liberation fills a specific niche at the intersection of the religious and the political. On the one hand, the group exists as an affinity space, an inclusive home on campus to celebrate Jewish and progressive identities. On the other hand, Jews for Liberation projects a clear political stance outwards, and takes decisive action to further specific causes.

Members of the group emphasize that politics and religion are not necessarily separable. “My political activism, for me, feels very rooted in my Jewish identity,” Rubinson says. “No religious space is apolitical,” Lovett-Graff says. “For Jewish spaces to say that they’re devoid of politics in some way is a political stance.”

During the Ten Days of Repentance between Rosh Hashanah and Yom Kippur, Jews for Liberation organized a transformative justice tashlich ceremony, a ritual during which people throw bread or stones into water to symbolize throwing away sins and turning over a new leaf.

Rubinson frames tashlich not only as a personal, religious ritual, but also as connected to more universal practices of transformative justice. Jews for Liberation invited Harvard prison abolition groups to the ritual, a partnership that aligns with the group’s general approach of intersectionality and solidarity. “I really do feel a sense that my liberation is bound up with the liberation of others,” says Kevin Keystone, a second-year HDS student and member of Jews for Liberation. “And by that, I of course mean Palestinians, but I don’t only mean Palestinians. For me, that’s also anti-racist work, that’s prison abolition, that’s fossil fuel divestment.”

Jews for Liberation’s work to decouple Judaism and Zionism has not come without pushback. Last year, when Jews for Liberation was first established, Lovett-Graff sent out a message to a WhatsApp group of Jewish Harvard students announcing the group’s establishment and founding principles. Lovett-Graff woke up the next morning to 93 unread messages and two missed calls. “The public acknowledgment that anti-Zionist Jews exist has been met with hostility and threats and insults,” says Lovett-Graff, though they note that people who wanted to get involved with Jews for Liberation also responded to the initial message with support and enthusiasm.

“Anytime a group wants to challenge an entrenched and, in my view, one dimensional politics that is held by powerful, institutional community groups, it’s going to make people uncomfortable,” says Keystone. “I think that’s actually an indication of why it’s so important.”

Members of Jews for Liberation don’t want to isolate themselves from the broader Jewish community — at Harvard or beyond. Rather, they say they are trying to build more inclusive communal foundations. “Our intended goal is to create an expansive space in which we center Jews who are most marginalized by Jewish organizations and communities,” Lovett-Graff says. Many Jews for Liberation members are involved with diverse Jewish groups on and off campus. “I belong to multiple different Jewish communities, and move between different Jewish spaces,” Rubinson says. “But I feel like that’s a part of the work I try to do, to be a little bit of a boundary crosser, an interconnected person.”