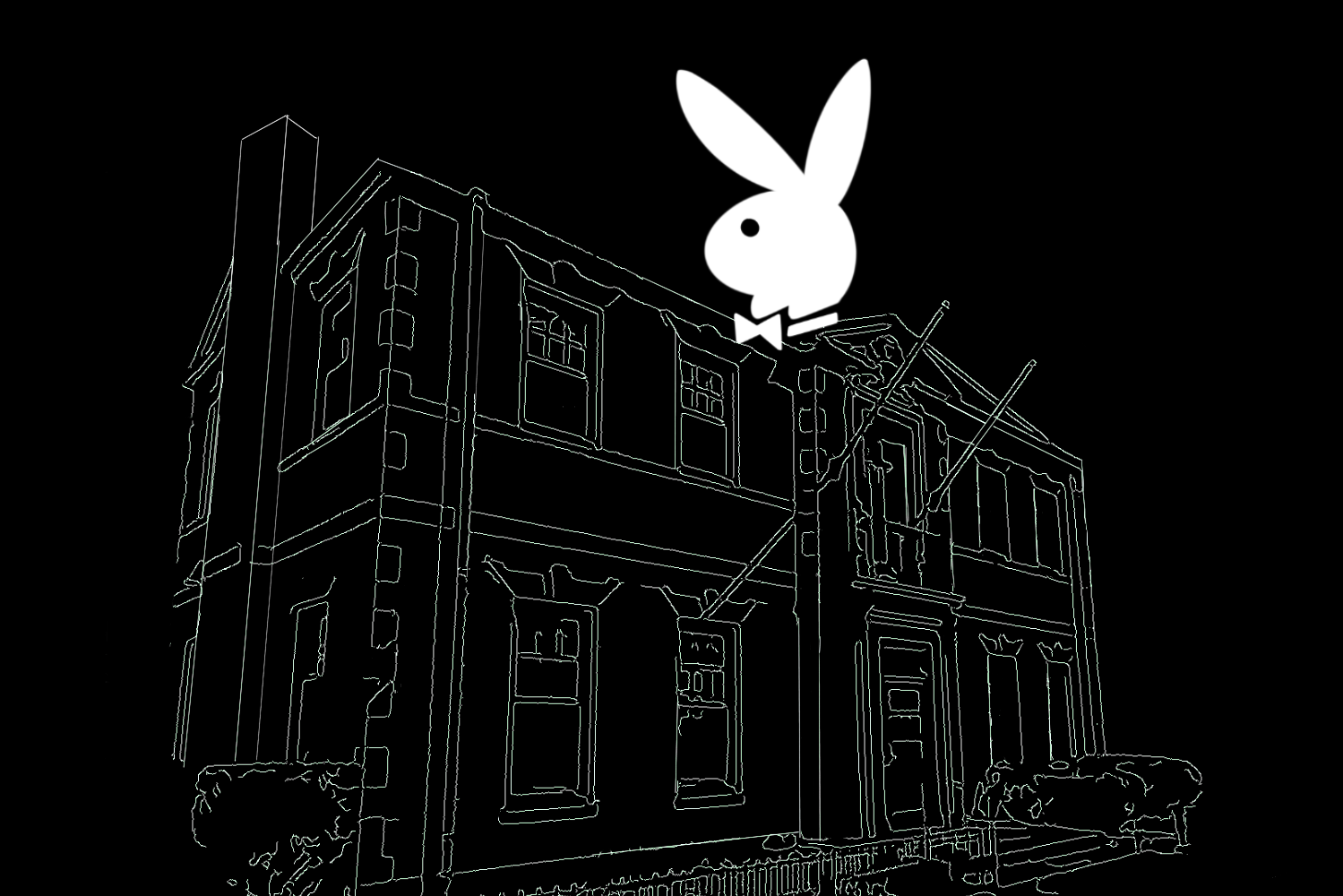 Before Playboy's ad was printed, however, a group of Crimson editors voted to reverse that decision — but not unanimously. At first, then-Crimson President Francis J. Connolly ’79 called David Chan on the phone and told him that the ad “was simply too offensive to appear in the pages of The Crimson,” according to the Boston Globe.
By Miles J. Herszenhorn

It was a Thursday at 14 Plympton St. in 1978. Thirty editors of The Harvard Crimson gathered to take a vote.

On the docket? Whether to allow Playboy Magazine to run an ad in the newspaper soliciting Harvard students to pose for the magazine’s “Women of the Ivy League” special issue.

A majority agreed to turn down the ad on the grounds that it was sexist, but what they didn’t know was that it would ignite a decades-long feud between The Crimson and Playboy Magazine.

Playboy, a men’s entertainment and lifestyle magazine, was known for its frequent centerfolds featuring nude models. In September 1979, Playboy published its inaugural “Women of the Ivy League” special edition, which featured Ivy League students on the cover and in an 11-page spread. The issue, which returned in 1986 and 1995, was inspired by previous Playboy special editions featuring students from Big Ten and Pacific Ten universities.

Months before the release of the 1979 “Women of the Ivy League” issue, David Chan, a photographer who worked on Playboy’s Big Ten and Pacific Ten special edition issues, embarked on a tour of Ivy League campuses to recruit student models. His first destination? 14 Plympton Street. “Harvard was his first school; the Crimson, his first stop,” the Boston Globe wrote in a Dec. 5, 1978 article.

Chan arrived in Cambridge on Nov. 29, 1978, and offered The Crimson $181 for a proposed advertisement that read: “Playboy is scanning the Ivy League for a cross section of women for the upcoming 1979 September issue.” The Crimson initially agreed to run the ad.

Before it was printed, however, a group of Crimson editors voted to reverse that decision — but not unanimously. At first, then-Crimson President Francis J. Connolly ’79 called Chan on the phone and told him that the ad “was simply too offensive to appear in the pages of The Crimson,” according to the Boston Globe.

But two days later, on Dec. 2, Connolly and then-Crimson Business Manager Peter Tufano ’79 published a nearly 1,600-word dissent, arguing that the majority’s decision was “the type of thinking that could easily be translated into a means of censoring unpopular beliefs, without having to face the rigorous test of proving a specific, correctable injustice.”

Crimson editors who voted in the majority to reject the advertisement responded a few days later in a Dec. 5 editorial.

“The Crimson decided not to run the ad because through the ad the paper would be actively helping Playboy in its exploitation of women,” the editorial explained.

“Far from being a radical departure from earlier Crimson ad policies, this recent action is simply another example of our refusal to accept ads that we believe contribute specifically to oppression of a group or class of people,” those who voted against the ad added. “We now hold that the problem of sexism in America and elsewhere merits a scrutiny of our ad policy similar to that given — for example — racism in South Africa.”

For days, The Crimson’s editorial pages were dominated by op-eds and letters to the editor about the decision to reject the Playboy advertisement. The Crimson published at least nine opinion pieces on the subject by both Crimson editors and non-Harvard affiliates.

Jeffrey R. Toobin ’82, a freshman at the time, penned a dissenting opinion titled “Run the Ad,” in which he called the decision to reject the advertisement “disturbingly paternalistic.”

“The refusal to publish was a form of censorship that ought not to be tolerated in a community of intelligent individuals,” Toobin wrote. “It would surprise us if our readers were not more insulted by The Crimson’s apparent lack of confidence in their ability to make intelligent decisions than by the content of the Playboy advertisement itself.”

As The Crimson debated the decision to reject the ad in its editorial pages, Chan took his business — and his burgeoning feud with Harvard’s student newspaper — elsewhere. On Dec. 5, 1978, the Boston Globe ran Chan’s Playboy advertisement and also printed a news article with the headline: “Harvard Crimson says Playboy is in wrong league.”

Chan told the Globe he was surprised that The Crimson chose to reject his advertisement. “I couldn’t believe it. I got censored. I felt very sad about that,” Chan said. “I thought people went to university for higher learning. I’ve been to about 25 schools in the past two years and not one of them has censored my ad.”

Playboy quickly realized that the controversy generated by The Crimson rejecting its advertisement would prove useful for generating publicity as it searched for models on other Ivy League campuses. In February 1979, nearly three months after The Crimson rejected the ad, national publications like the New York Times and Time Magazine were still writing about Playboy’s alleged censorship at Harvard.

Susan D. Chira ’80, who succeeded Connolly as president of The Crimson in 1979, says their decision to reject the advertisement was “such great copy” for Playboy and their publicity campaign.

“There was a form of sexism in the way that it was portrayed,” Chira says. “It’s like, ‘Those uptight Ivy League women at Harvard want to prevent women at Harvard who might like to pose for Playboy from doing so.’ So the tone was very mocking.”

Chira says the publications were able to craft an even better article about the decision to reject the Playboy advertisement once she took over the newspaper. “It was more delicious because a woman was running it,” Chira says. “Might they have mocked The Harvard Crimson for not taking the ad? Hard to say, but the fact that I was a woman made it just perfect in terms of a story.”

“There was a brief boomlet of little nasty stories, which we shrugged off and went on with our lives,” Chira adds.

Eight years later, however, Playboy returned to 14 Plympton St. for its second “Women of the Ivy League” issue, once again asking The Crimson to publish a call for student models. Just like in 1978, The Crimson voted against running the advertisement, again drawing the attention of the New York Times.

“In Ivy League, Only Harvard Bars Pinup Ad” read a headline in the New York Times on March 9, 1986. “The Crimson stood alone, however, as the ad ran in The Boston Herald, The Boston Globe, The Boston Phoenix and in The Harvard Independent, a weekly campus publication,” the article reported.

Then-Crimson President Joseph F. Kahn ’87 told the New York Times — which misprinted the middle initial of its future executive editor in the article — that “after three hours of debate, we decided to reject the ad on the grounds that Playboy and the advertisement degrade women, and we at The Crimson did not want to aid the degradation by printing the ad.”

Jeffrey A. Zucker ’86, who had served as Crimson President the previous year in 1985, penned an opinion piece criticizing the newspaper’s decision to reject the ad. “By not running the ad, the majority of The Crimson has attempted to determine what is socially acceptable not only for the entire Crimson, but for all of Harvard’s 6000 students,” Zucker wrote. “It is wrong for any group to decide what is socially acceptable, and we resent the majority’s decision to define social acceptability by suppressing, rather than encouraging open expression.”

But Lisa Cole, who served as publicity director for Playboy, was not as troubled by The Crimson’s decision, recognizing that the magazine stood to gain from the media coverage about the ad’s rejection.

“We did in fact anticipate The Crimson’s reaction and knew that it would give us a good deal of publicity,” Cole told the New York Times in 1986. “By refusing our ad, they did us a great favor.”