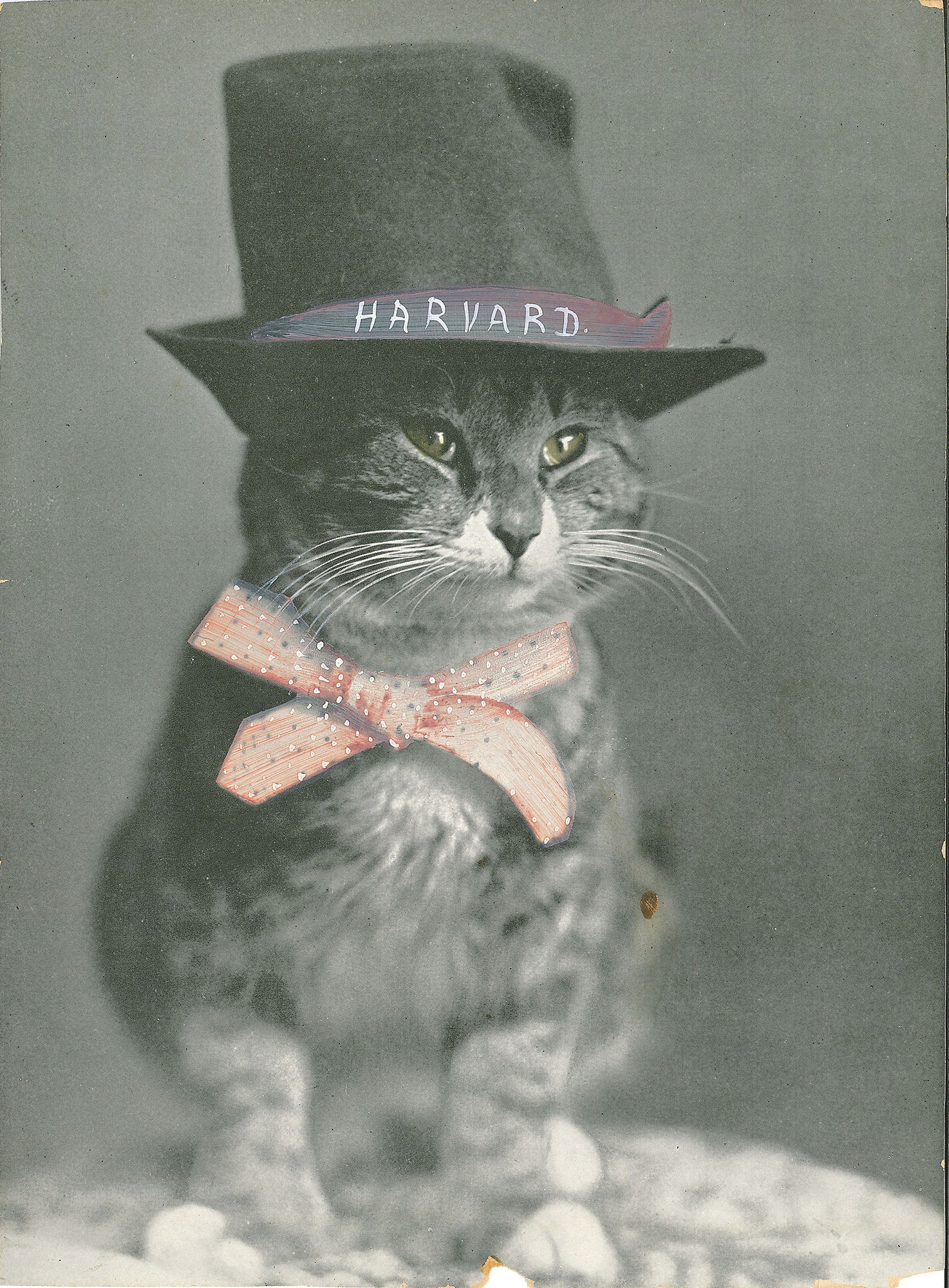 Halftone print of a photograph of Sarah the Cat wearing a top hat. Color painted additions include a bow tie and a band around the hat that reads "Harvard." HUG 3273.2.
Advertisement
Advertisement

Remy had a predecessor by the name of Sarah — a single, working cat with a much less stable housing and financial situation for whom life held a lot more danger and uncertainty.
By Natalie K. Bandura and Raihana Rahman

We all know and love Remy, Harvard’s famous cat, who is owned by a local Cambridge family yet spends his days lounging around in the Yard, leading a relatively carefree life of leisure with a stable home, a campus full of those who love him, and a Twitter following of more than 2,000 fans.

What you may not know is that Remy isn’t Harvard’s first school pet. Remy had a predecessor by the name of Sarah — a single, working cat with a much less stable housing and financial situation for whom life held a lot more danger and uncertainty.

In 1931, Sarah the College Cat was found sheltered in a window of Holden Chapel. It is unknown who discovered or named her, but according to the Cambridge Historical Society, she came under the collective care of the Yard’s janitors and watchmen.

Sarah took up residence in Harvard Hall. When she wasn’t following the Yard patrols throughout the night, she earned her keep by catching mice. She was awfully good at it: in 1936, the Boston Globe reported she had single-handedly eliminated all of the mice that found their way to Harvard Hall.

In early 1934, Sarah became pregnant with kittens. “Sarah, Yard cat and mouser extraordinary, is now anticipating a blessed event,” The Crimson reported. The Harvard Hall janitor who had been taking care of her revoked his responsibility, claiming that caring for kittens would be too burdensome.

Stoughton Hall’s janitor assumed primary responsibility for Sarah instead, but his adoption was conditional — he expected her kittens to grow into expert mousers and follow in their mother’s paw-steps. He had plans to make money renting out the kittens for mousing services throughout the Yard.

Sarah gave birth to three kittens in April 1934. One janitor suggested naming the kittens Increase Mather, Cotton Mather, and Whatsa Mather — a play on the names of Harvard’s sixth president and his son — but the janitor’s idea was shot down. Beyond that, little is known about what names the kittens were given or where they were taken after their birth.

After becoming a mother, Sarah’s fan base continued to grow. In 1936, she was gifted a small red collar by an anonymous admirer. (“NEW COLLAR FOR SARAH,” The Crimson’s headline read.) On it hung a plate engraved with her name, which she wore proudly and displayed to everyone who took the time to look. Though the collar is lost to history, the package it came in, addressed to Sarah herself, is located in the Harvard Archives along with one of her photographs.

Unfortunately, Sarah went missing in 1937. Yard police immediately began a tireless search for the stray. Members of the Greater Boston community pitched in, calling in reports of sightings from Dorchester, Roxbury, and Lowell. The search turned up two dachshunds near Winthrop House, but no Sarah.

Though her disappearance was mysterious and left students mourning, Sarah’s six-year presence on campus earned her a spot as one of Harvard’s unofficial mascots and no doubt paved the way for Remy to take up the torch as the beloved campus cat.