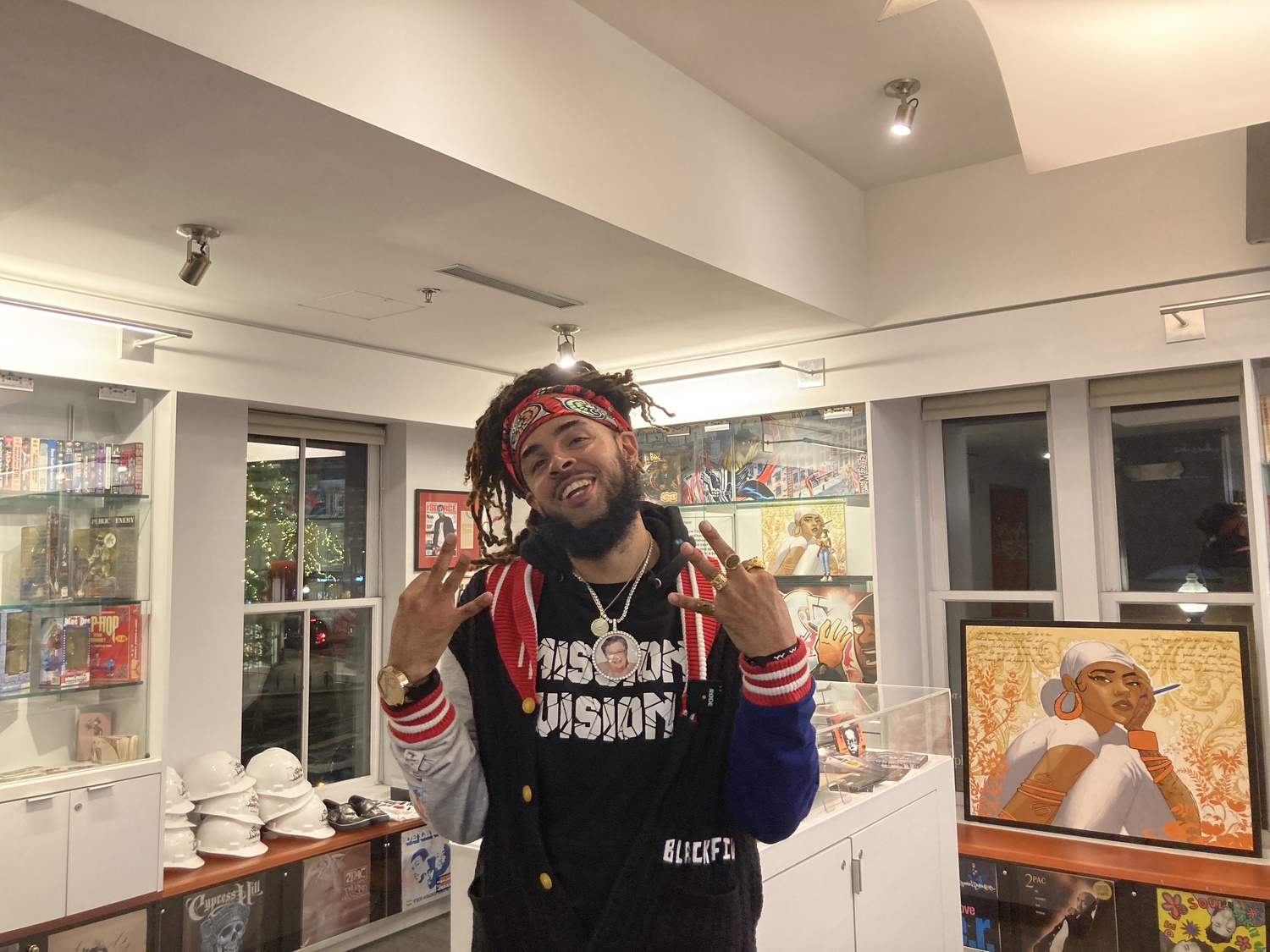 In the Hutchins Center for African and African American research, rapper and activist Dee-1 gave a talk titled "Is Trap Music a Trap?" By Courtesy of Dee-1
Advertisement
Advertisement

Still, several questions remain unanswered: Do the supposed “traps” of trap music outweigh its value? Can you evaluate the “right” way to musically reconcile with injustice? How should Black Americans communicate exasperation and emergency and unrest?
By Victoria A. Kishoiyian

Trap music is a form of truth and reclamation; it offers respite to those who relate. The albums of Young Jeezy, Gucci Mane, and T.I. — the holy trinity of trap music — served as the audio for my early adolescence, transporting me to Atlanta’s early-to-mid 2000s trap music scene. My middle school years can be captured by afternoons spent bopping to Kodak Black mixtapes, a spiritual kinship among Black kids from Southwest Florida. But recently, the emotionally and rhythmically-compelling genre that shaped my childhood was challenged.

On Oct. 11, in the Hutchins Center Hiphop Archive & Research Institute, John Augustine Jr., known professionally as Dee-1, commanded the room with the controversial question: “Is trap music a trap?”

Born and raised in New Orleans, Louisiana, Dee-1 believes that “while trap music may lead some to the dance floor, it will guide others towards the graveyard.” He is a rapper, educator, activist, business owner, member of the Louisiana Council on the Success of Black Men and Boys, and the 2022-2023 Nasir Jones Hiphop Fellow at the Hiphop Archive & Research Institute. He said his lifelong relationship with trap music has confidently led him to one conclusion: Trap music traps young Black people who idolize rappers. But these young people aren’t culpable — fans are. You are. In his two-hour lecture, Dee-1 asserted that rappers respond to fans, and if their audience endorses music that celebrates a life of drug use, gun violence, misogyny, and crime, the musicians will continue to create work centering those topics.

To fully understand Dee-1’s message about the social implications of trap, it is important to first acknowledge the difference between rap and trap music. Rap is the vocal delivery of lyrics within hip-hop music, a style that emphasizes rhyme, rhythm, and slang. Trap music is a subgenre of hip-hop that emerged in the American South during the late 1980s. Its name was derived from the Atlanta slang word “trap,” referring to a “trap house” used to manufacture, sell, and do drugs. More broadly, trap symbolizes something inescapable and grim. Pioneers of trap include Shawty Redd, Fatboi, Young Jeezy, Gucci Mane, and T.I., whose work chronicles their lives navigating low-income urban communities. Dee-1 insisted that as trap rose in relevance, the glamorization of the trap life became detrimental for young listeners in close proximity to the lifestyle.

After graduating from Louisiana State University, Dee-1 became a middle school math teacher working with students in Baton Rouge, Louisiana. As an educator, he intimately observed how Black middle school students consumed trap music and copied the attitudes of rappers. During the lecture, he recounted a story of a seventh-grade boy who got a tattoo of the phrase “M.O.B.” (Money Over Bitches). When Dee-1 asked if he knew what the acronym meant, the student referenced a Lil Wayne song with the same title.

Dee-1 said he understands why young Black people are attracted to trap music: it musicalizes and makes sense of their lived experiences. However, he said that rappers who endure poverty and get involved in gang life should instead “use their creative capital to describe [those things] in a way that does not cross over into glorifying.” But he never defined the line between describing and glorifying — and his ambiguity left me wondering whether violence, drugs, and poverty can be rapped about without being deemed irresponsible.

Following his reflection on the collateral consequences of trap music, Dee-1 argued that supporting trap music makes you complicit in the repression of Black youth from low-income urban communities. He then challenged the crowd of mostly Black Harvard affiliates attending the lecture with two questions: “Do we want to escalate or amplify the oppression synonymous with our experience in the United States?” and “What part of our culture do we want to show to the world?”

As the room fell silent, I couldn’t help but feel that these questions were misguided, and that they reinforced the rhetoric of conservative proponents of racial uplift and respectability politics. I value Dee-1’s concern for young Black people who grow up without firm ideas of success outside of the dysfunctional, hyper-material representation of success in trap. I, too, grew up alongside people who fell victim to the unsustainable, damaging, and dangerous trap lifestyle. But that wasn’t entirely because of trap music; that was primarily because the conditions of our community made it so that there were few avenues for ambition to travel or traditional success to materialize. The responsibility rests on a government which upholds oppressive institutions such as public housing segregation, inequitable education, hyper-targeted policing, and communal disempowerment through mass incarceration — not on trap music.

My main issue with Dee-1’s condemnation is his unwarranted vilification of rappers. In his analysis, he ignored the clear intentions of rappers: escapism, artistic expression, money, and social mobility. When claiming that trap struggles to receive pushback because it is “real life for some, entertainment for others,” he failed to mention several important considerations.

For listeners who resonate, trap music can be unifying. And if it does inspire those listeners to pursue paths similar to their favorite rappers, trap is still not entirely at fault, as proximity to the lifestyle is a result of historical and continual racial subordination. Listeners who exist at a significant “distance from disadvantage,” as Dee-1 put it, but feel comfortable bumping to trap music without taking action are truly problematic. Enjoying the hard-hitting, hype beats of famous rappers without learning about the social issues that created the genre is a harmful expression of privilege.

I agree with Dee-1’s assertion that the oversexualization and objectification of women in trap music is damaging and destructive — and with his criticism of Black masculinity. “Masculinity doesn't have to mean the only way that I know how to handle my emotions is to get violent,” he said. Redefining Black masculinity is necessary for trap music to truly thrive. Yet, even that fault can be connected to racial subordination, a complicated reality that requires a more nuanced conversation than what a brief lecture can offer.

Still, several questions remain unanswered: Do the supposed “traps” of trap music outweigh its value? Can you evaluate the “right” way to musically reconcile with injustice? How should Black Americans communicate exasperation and emergency and unrest? While I could attempt to resolve these questions and provide a directive detailing what Black Americans should do about Dee-1’s discussion, I won’t. Because, quite bluntly, Black Americans are not and never will be wholly responsible for remedying the “repercussions” of trap music. And asking us to do so would be disrespectful and a disservice to the severity of the situation.

Instead, I encourage Black Americans to continue to find solace and power in this beautifully complicated art form which disrupts conversations about racial justice and embraces its own spectacle. Hopefully trap music’s stark, stunning, and suggestive nature will convince the government to begin the long-overdue work of repairing the conditions that trap music characterizes.