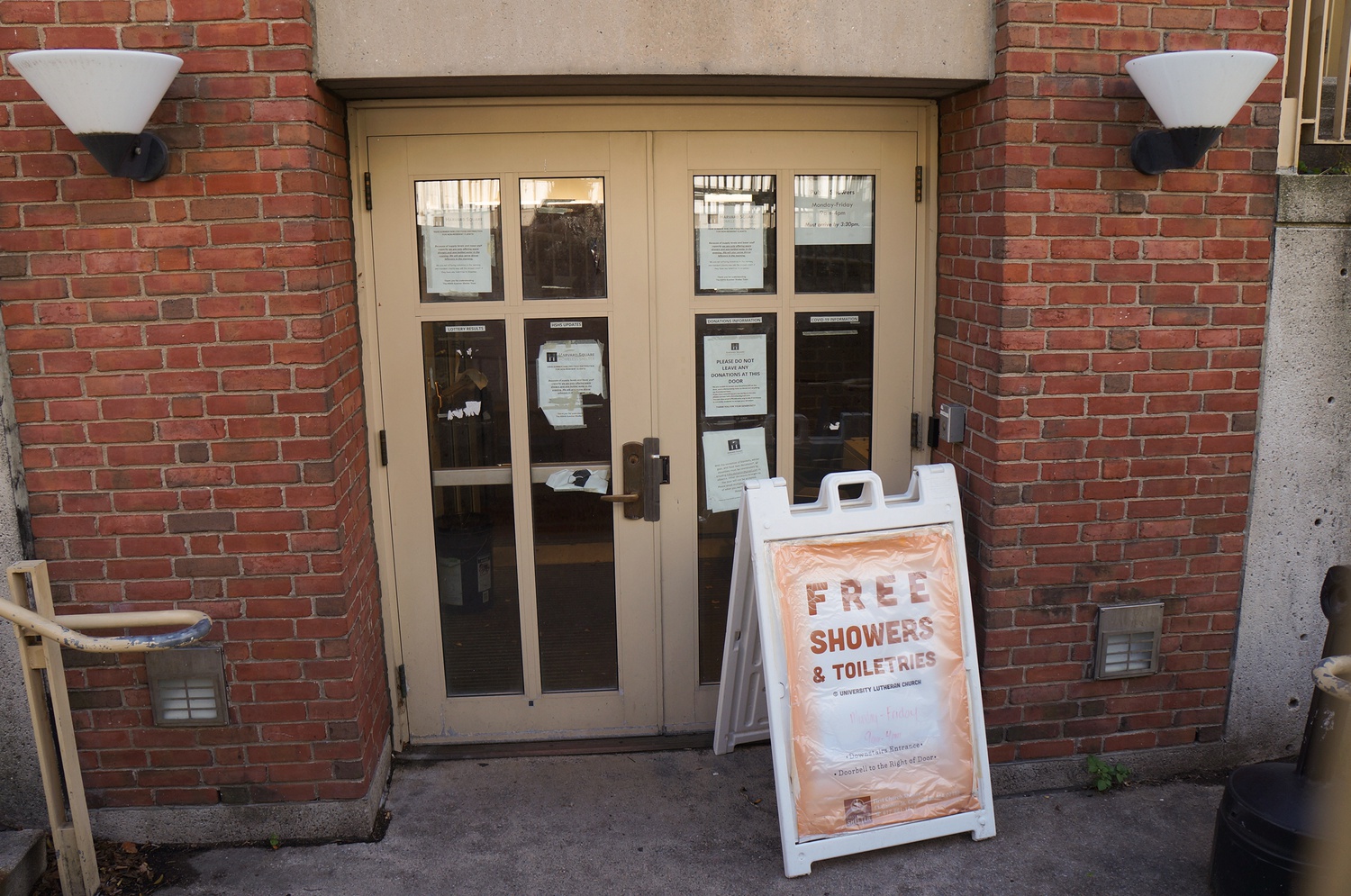 Dying Without Identification in Harvard Square

What exactly happens to an unhoused person if they die, unidentified, in the state of Massachusetts?
By Michal Goldstein

About a year ago, on Nov. 19, 2021, Kody Christiansen found an unhoused man dead in front of the Bank of America in Harvard Square.

“I’ll never forget his face. It was blue — it was frozen in time — he was gone,” Christiansen, a Harvard Extension School student and special student to the Graduate School of Arts and Sciences, wrote in an article for the Harvard Political Review.

The man was known around the Square by the name of “Michael” — no last name, no further identifying familial information. He had been living around the neighborhood for years. Some residents knew to leave peanut butter and crackers, one of his favorite snacks, for him in the community fridge.

But without a confirmed full name, state ID, wallet on his person, or fingerprint in the government system, the state of Massachusetts considered Michael to be “unknown” at the time of his death. 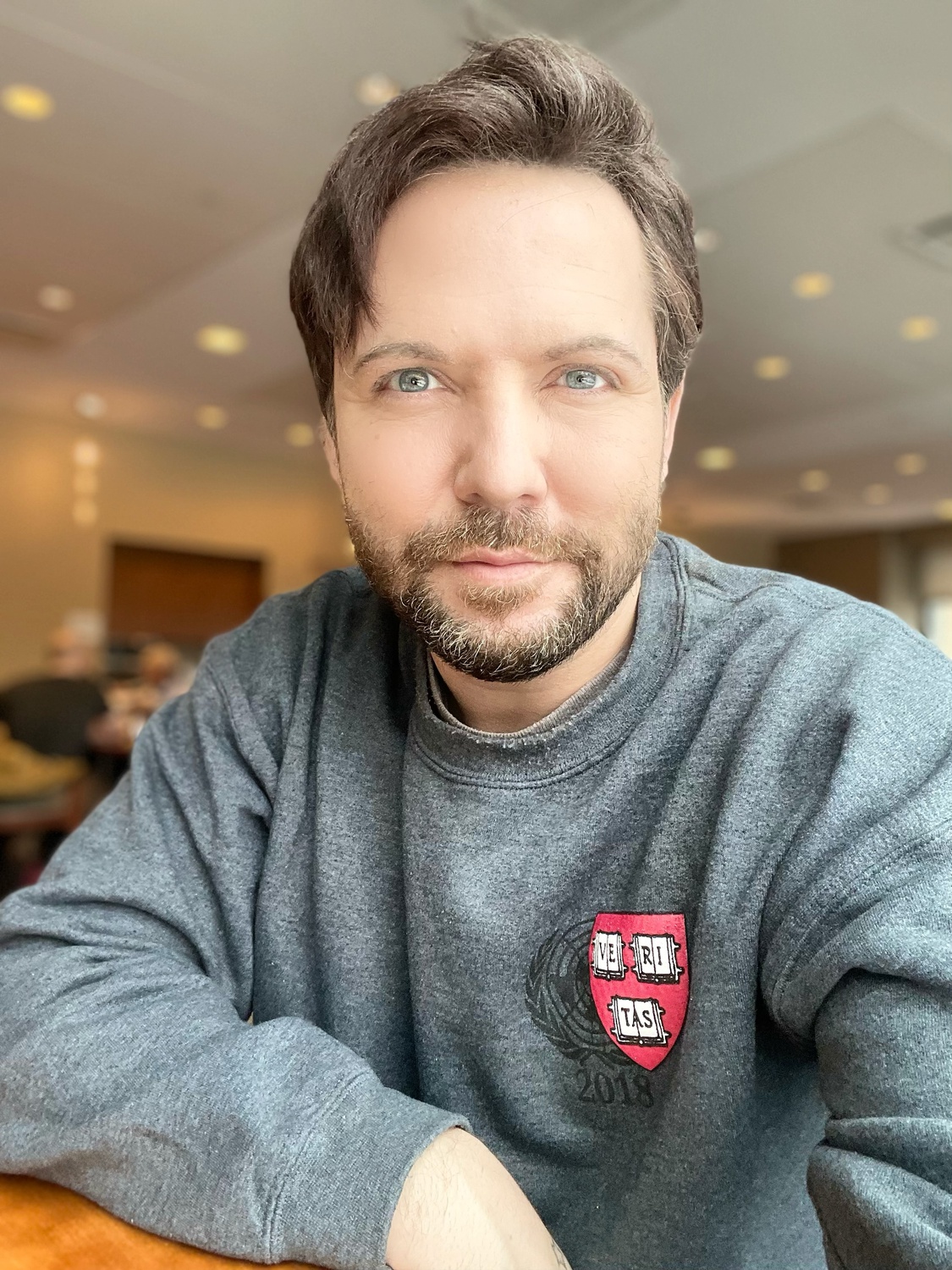 Kody Christansen, an Extension School student, says he will never forget when he found an unhoused man dead in Harvard Square last year. By Courtesy of Kody Christiansen

By the time the winter snow melted and spring began, no one had laid claim to Michael’s body. Thus began a series of communications between local residents, who wanted to memorialize Michael after his death, and the Office of the Chief Medical Examiner, whose decisions were governed by the state’s right of disposition laws.

For many locals, the incident raised a critical question that few had asked before. What exactly happens to an unhoused person if they die, unidentified, in the state of Massachusetts?

At the time of his death, the only identifying object that Michael had on his body was a yellow silicone wristband with a phone number to the Capuchin Mobile Ministries.

The group, which defines itself as a “ministry of spiritual caregiving” for unhoused people, runs outreach trips throughout the Greater Boston Area, offering religious resources as well as meals to those in need.

According to Father Sam Fuller, Michael had approached the Ministries at their Harvard Square stop.

“We didn’t quite know his name — he didn’t say much — but he certainly had a benevolent presence about him,” Fuller says. “We didn’t really get involved until we all of a sudden got a call from the city morgue.”

Unfortunately, the Capuchin Fathers had no identifying information about Michael to provide the Office of the Chief Medical Examiner. “It was heartbreaking,” Fuller says. Months later, members of the Capuchin Mobile Ministries noticed a short poem — which Christiansen wrote — pinned to a tree outside the Bank of America. Denise A. Jillson, executive director of the Harvard Square Business Association, had helped organize the small act of tribute.

The poem, which addresses Michael as a “neighbor” and “friend,” reminisces about the days he would sleep outside storefronts in the Square and wishes him peace throughout his permanent rest. “Your soul, your light — not forgotten by us here,” it reads. “Forever in our hearts your memory shall stay dear.” 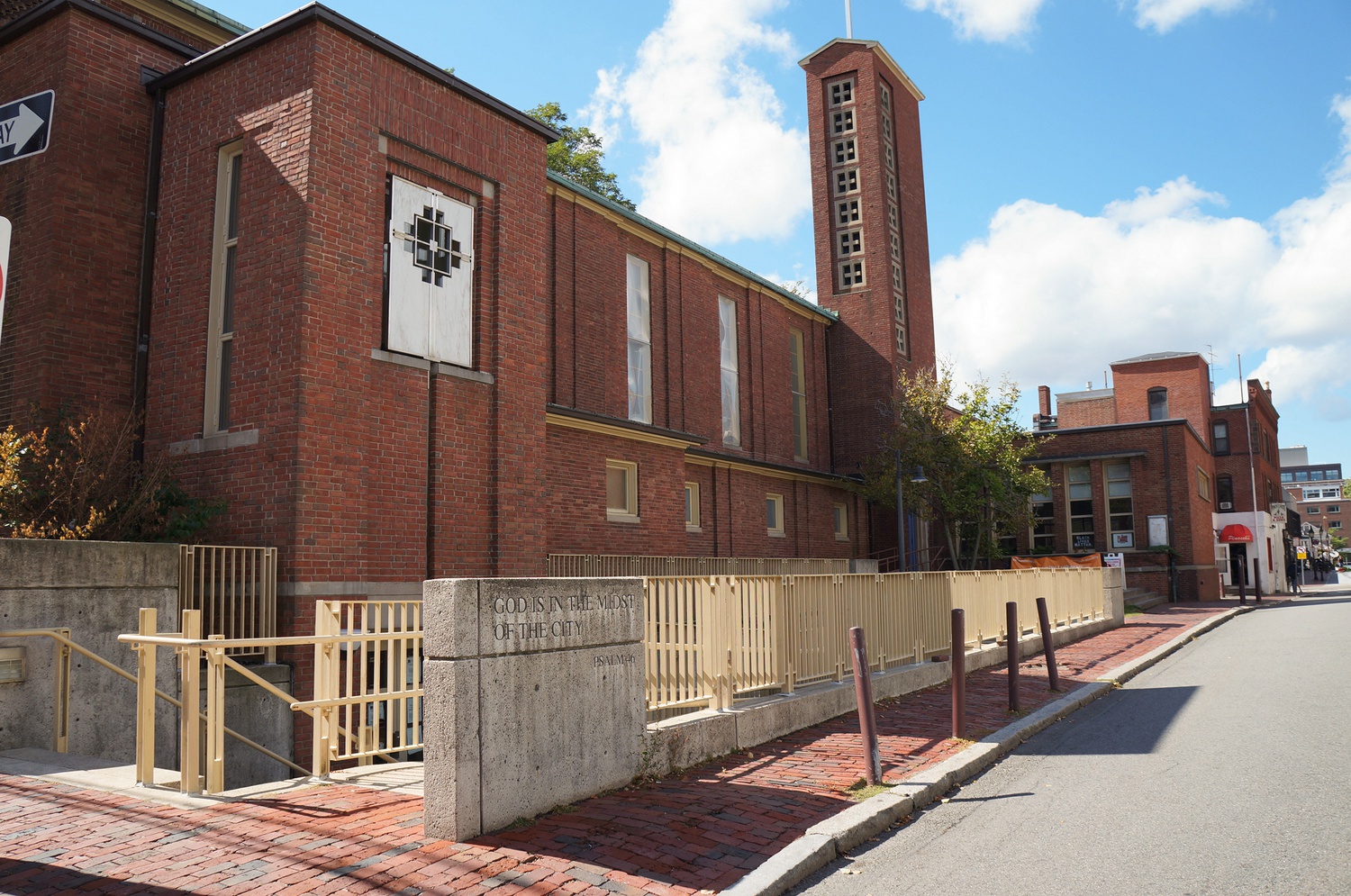 The Harvard Square Homeless Shelter hosts up to 24 people every night from October to April. By Jennifer Z. Liang

The lines moved Fuller to reach out to Jillson and lead the Capuchin Fathers in planning a brief memorial service for Michael near the Bank of America tree. But both Jillson and Fuller recognized that a proper funeral could not be held without the state handing over Michael’s body.

According to Massachusetts general law, after a proper investigation or examination by the Office of the Chief Medical Examiner, bodies may be released to the descendant’s “surviving spouse, the next of kin, or any friend of the deceased.” In the case that a body cannot be identified, it becomes the responsibility of the state’s Department of Transitional Assistance.

The DTA specifically provides for the disposition of deceased individuals who are recipients of government assistance, who would have been eligible for assistance at their time of death, or who died anonymously. In such situations, the DTA has a budget for organizing a funeral and final disposition for the person.

Michael’s body would supposedly be released to the DTA, and it seemed that it would stay there. Even as far out as late April, residents who hoped to organize a funeral for Michael still faced resistance from the Chief Medical Examiner's Office.

“It’s been six months. We have all of these people in the community who are willing to take the body and embalm it, have a service, and bury him appropriately. Will you release the body?” Jillson remembers asking the Examiner’s Office at the time. “They absolutely [would] not.”

At the end of May, an official from the Chief Medical Examiner’s Office reached out to Jillson to say the state had “exhausted all efforts in trying to make a positive identification for the Unknown Male that was pronounced at Mt. Auburn Hospital.”

“He will be released from our office as Unknown,” the email said.

Jillson reached out to those in the neighborhood who had offered to help with Michael’s case, expressing relief and gratitude.

“Typically, a body that’s not identified is not released,” he says. He adds, “There were no fingerprints on record; he had no police record. And then, the medical examiners weren’t even sure if Michael was indeed his real first name.”

But Keefe believes that it was Jillson’s persistence and willingness to take responsibility that likely made the medical examiners amenable to the request. The Keefe Funeral Home became the official claimant of the body.

“They were comfortable releasing him into our care knowing that cremation was not going to take place and that he would be buried in a grave that would be marked — and ultimately, space would be given for him,” Keefe says. (Cremation would prevent potential family members or friends from being able to come forward and claim Michael’s body in the future.)

On June 30, Keefe brought the hearse in front of the First Parish Church in the Square. The long wait for Michael’s remembrance ceremony had come to an end. Michael was given a burial plot at the Cambridge Cemetery, finally laid to rest.

It has been a year since Christiansen found Michael in front of the Bank of America, and that cold morning in November, that image of Michael’s face, remains on his mind.

“The community coming together for Michael was beautiful,” Christiansen recalls. “I wish it had been easier.

Christiansen had, of course, hoped that the coroner would succeed in identifying Michael’s body and reaching out to his family members. “Somebody somewhere is missing their brother, their son, their cousin,” he says.

But given that this wasn’t the case, Christiansen says he feels “blessed” that he was the one to find Michael and could make the effort to ensure he did not “just disappear into the ether.”

To help prevent cases like Michael’s from occurring again, Christiansen has launched a program at the Harvard Square Homeless Shelter called “I Deserve ID.” Funded by grants from the Harvard College Social Fund and Harvard Radcliffe Institute, I Deserve ID assists HSHS clients with acquiring identification, a process that Christiansen knows to be both difficult and expensive from personal experience.

“As a formerly homeless person myself, I lost my ID on multiple occasions. Things were stolen from shelters; things were lost in the evenings,” Christiansen says.

He adds, “When you’re in a homeless shelter or when you’re on the streets, it’s really hard to motivate yourself to go get the help that you need. I personally was depressed. I didn’t think there was a lot of light at the end of the tunnel when I was at my lowest point of homelessness. So thinking about going to the Social Security office and standing in line for hours and trying to prove who I am without any documents — in order to get a document — just felt like a Herculean task.”

HSHS, which hosts up to 24 people every night from October to April — now provides its clients with a document of comprehensive information about how to apply for an ID, pays for their application, and allows them to set the shelter as the return address for the ID. This return address is a key part of the process — the unhoused population faces a particular barrier to procuring identification because they do not have a home address to send it to.

Christiansen says that several people have already utilized the program. He hopes HSHS will continue offering the service in years to come. 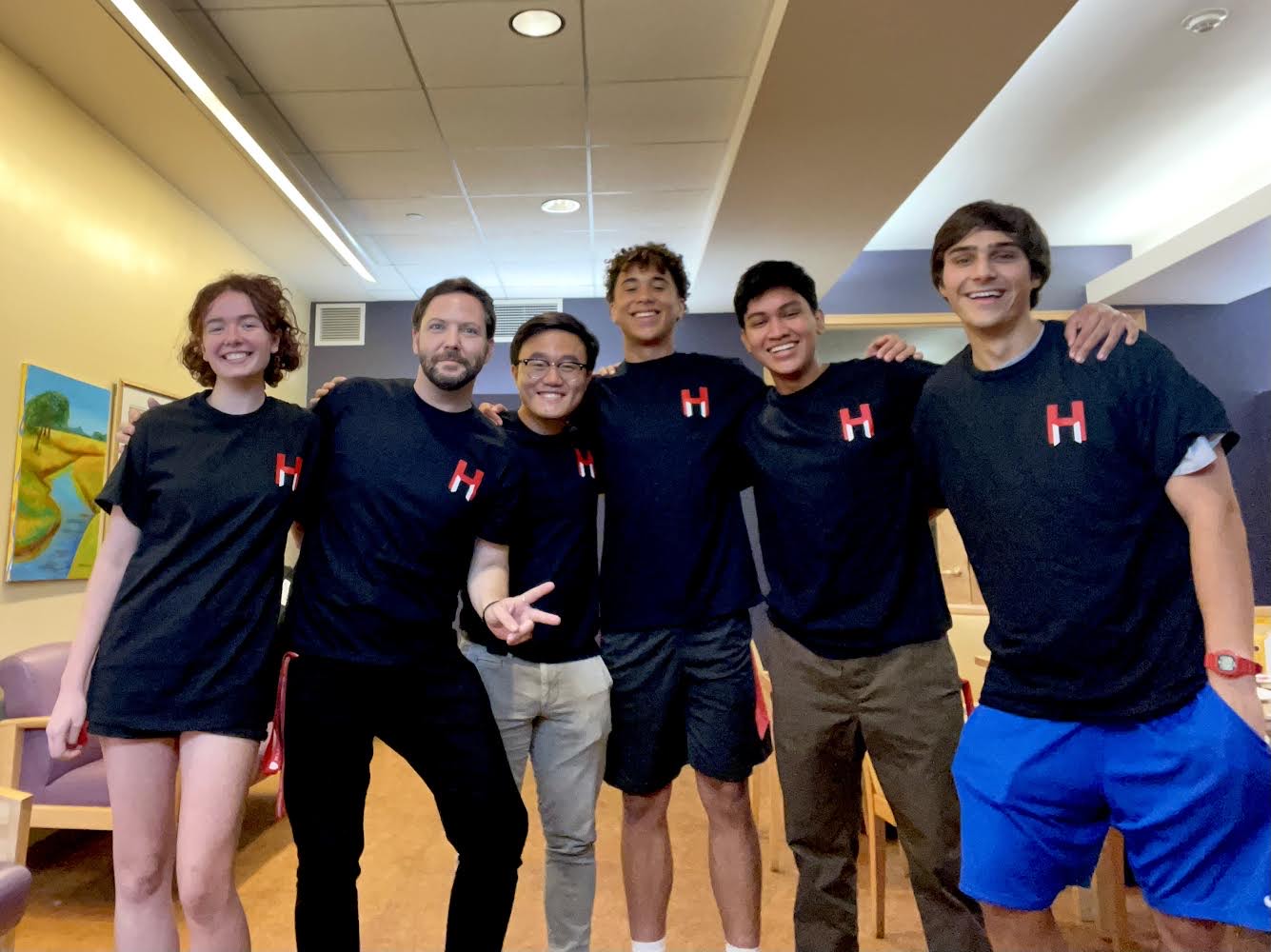 As Christiansen prepares to leave campus upon graduation in May, he imagines that Michael’s story will encourage Harvard students to reflect on how they treat Harvard Square’s unhoused residents.

Michael’s loss is just one of many within Cambridge’s unhoused population, although it received more attention than most others. But beyond the issue of identification, his death has prompted many residents to seriously consider what it would take to keep unhoused people safe — to see them as neighbors, to show care and concern for their lives and not just their deaths.