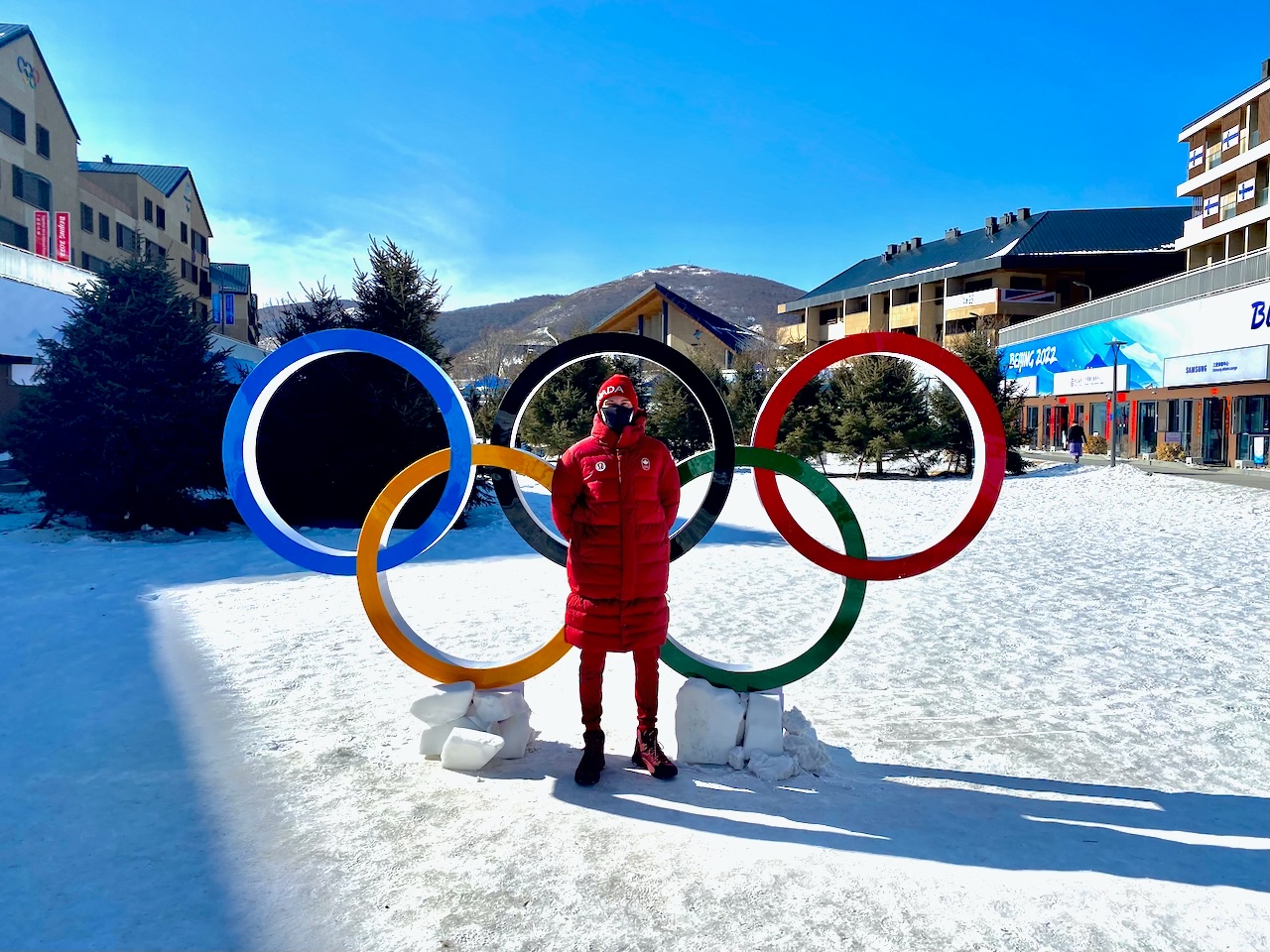 Around the Olympic Village with Remi R. Drolet

For Drolet, a cross-country skier from Canada and physics concentrator in Adams House, it took a while to realize he was at the 2022 Beijing Winter Olympics. It was only when he drove past a large display of the Olympic rings lit up in the dark  that the magnitude of his accomplishment sunk in.
By Miles J. Herszenhorn

For Drolet, a cross-country skier from Canada and physics concentrator in Adams House, it took a while to realize he was at the 2022 Beijing Winter Olympics. It was only when he drove past a large display of the Olympic rings lit up in the dark that the magnitude of his accomplishment sunk in.

Drolet, who spoke with me from the airport because he has been traveling around northern Europe to attend post-Olympic skiing competitions, raced in four events at the Olympics, including in the men’s 4x10 km relay race where he helped lead Team Canada to an 11th place finish. Drolet placed competitively in his individual races as well. Despite these results, he says he “was hoping for a little bit more,” but admits that just being in Beijing was “a really good experience.”

Drolet has been cross-country skiing since before he could ski.

As a toddler, Drolet’s parents would strap him to their backs and take him skiing. “I grew up in a town that’s really big on alpine skiing, and just skiing in general,” he explains. “They would often take me either for hikes or skis in the backpack.”

As soon as he was out of the backpack at age three, Drolet was skiing himself. It took him a bit longer to start competing in skiing events, because like many Canadians, his main sport as a young child was ice hockey. But it was not long before he started drifting away from the sport.

At the time, Drolet was taking skiing lessons at school when an instructor he liked encouraged him to join a local skiing club. “I tried it out and really loved it and kind of just went from there,” he says.

A decade later, he would be competing at the Olympics.

But Drolet’s journey to Beijing has been anything but easy. He has wanted to make the Olympic team since the 2018 Winter Olympics in Pyeongchang, South Korea. “The Olympics was something I’ve been building towards for the past four years,” he says. “This was the first Olympics where I was really hoping to make it, so I’ve been training really hard with that goal in the back of my mind for the past four years.” 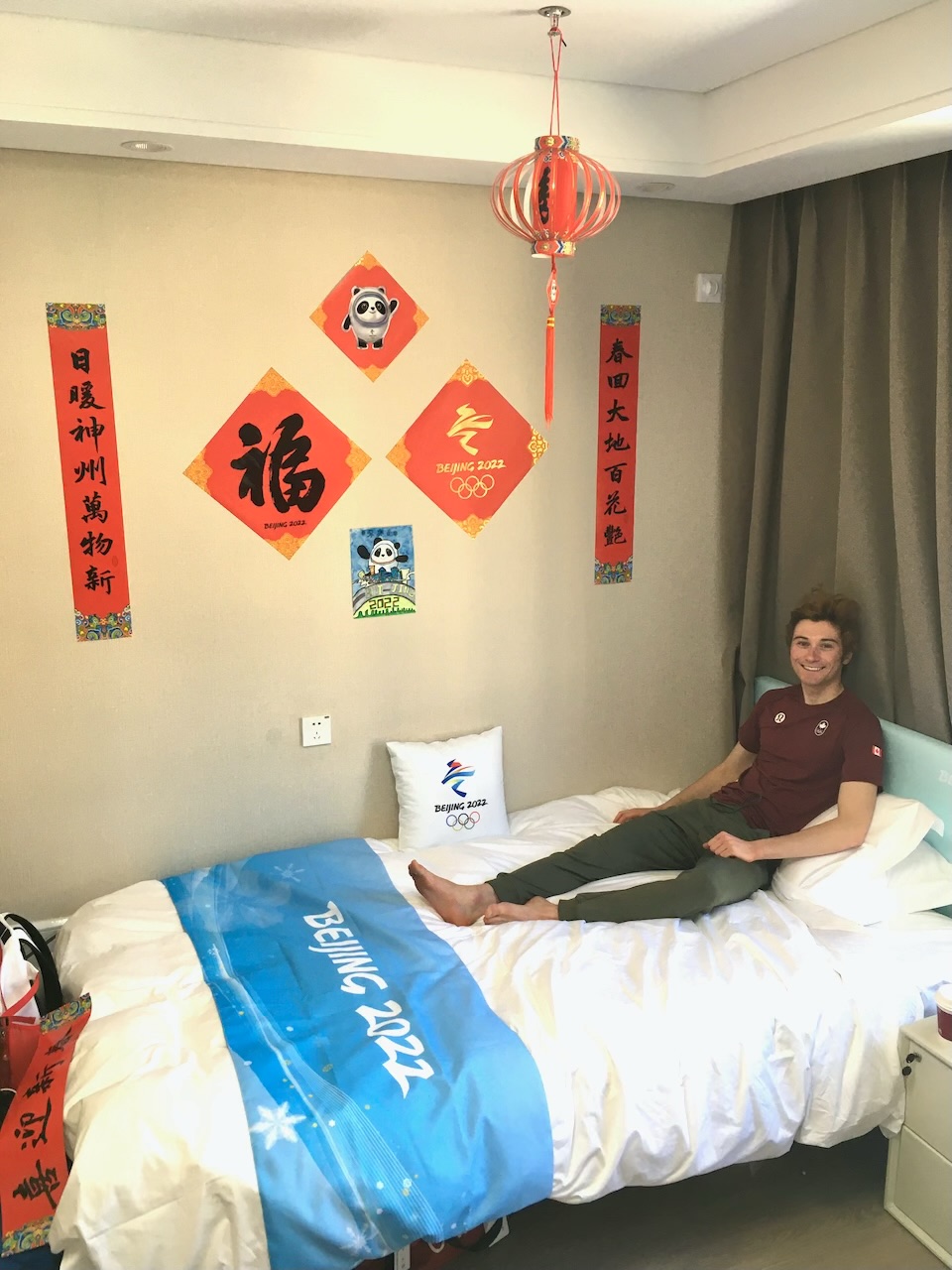 Drolet relaxes in his room in the Olympic Village. He took a year off from Harvard to focus on skiing full-time, but plans to return in the fall to complete his degree in Physics. By Courtesy of Remi Drolet

At the Olympic trials in January, Drolet had to put his hard work to the test in order to snag a spot on the team. “At the time, all the spots on the team had been filled from people that were racing on the World Cup earlier in the year,” he says. “I knew I had to basically be the top nonqualified finisher at the trials to make it.”

Drolet won the spot, but even still, his Olympic future was up in the air. “At first, it wasn’t official,” he says. “I was just technically the alternate for the team.” He had to hope extra slots would free up, which happens when another country does not use all of its allocated spots. The wait was “stressful” and “nerve-wracking,” he recalls.

“It would have been like a week or two before we’re actually leaving for China, when I heard back,” he says. “Once I got it, it was just like pure relief.”

After the relief, he celebrated. The first phone call Drolet made upon hearing the news was to his coach, Dave Wood, to whom Drolet attributes much of his success.

Drolet insists, however, that his parents were not offended when they weren’t the first call. “I think they were fine,” he says with a laugh. “I mean, it was all kind of at the same time.”

Drolet says the impact skiing has had on his life has been greater than either he or his parents “ever would have imagined.” “Skiing has taken me tons of places around the world and given me so many great opportunities,” he says while getting ready to catch his next flight.

Drolet will return to Cambridge this fall after the FIS Cross-Country World Cup season ends, resuming his studies after taking a year off to focus on skiing.

“I’m excited to head back to Harvard and get back to doing schoolwork,” he says. “It’s really good to have other things like school or physics formulas to try and get your mind off things.”

When asked if he finds skiing at the Olympics or studying physics at Harvard more difficult, Drolet replies, “I’d say an Olympic race is harder than an individual pset, but I guess it depends how many psets you have. If you have a really mean professor, you could probably get kind of close.”