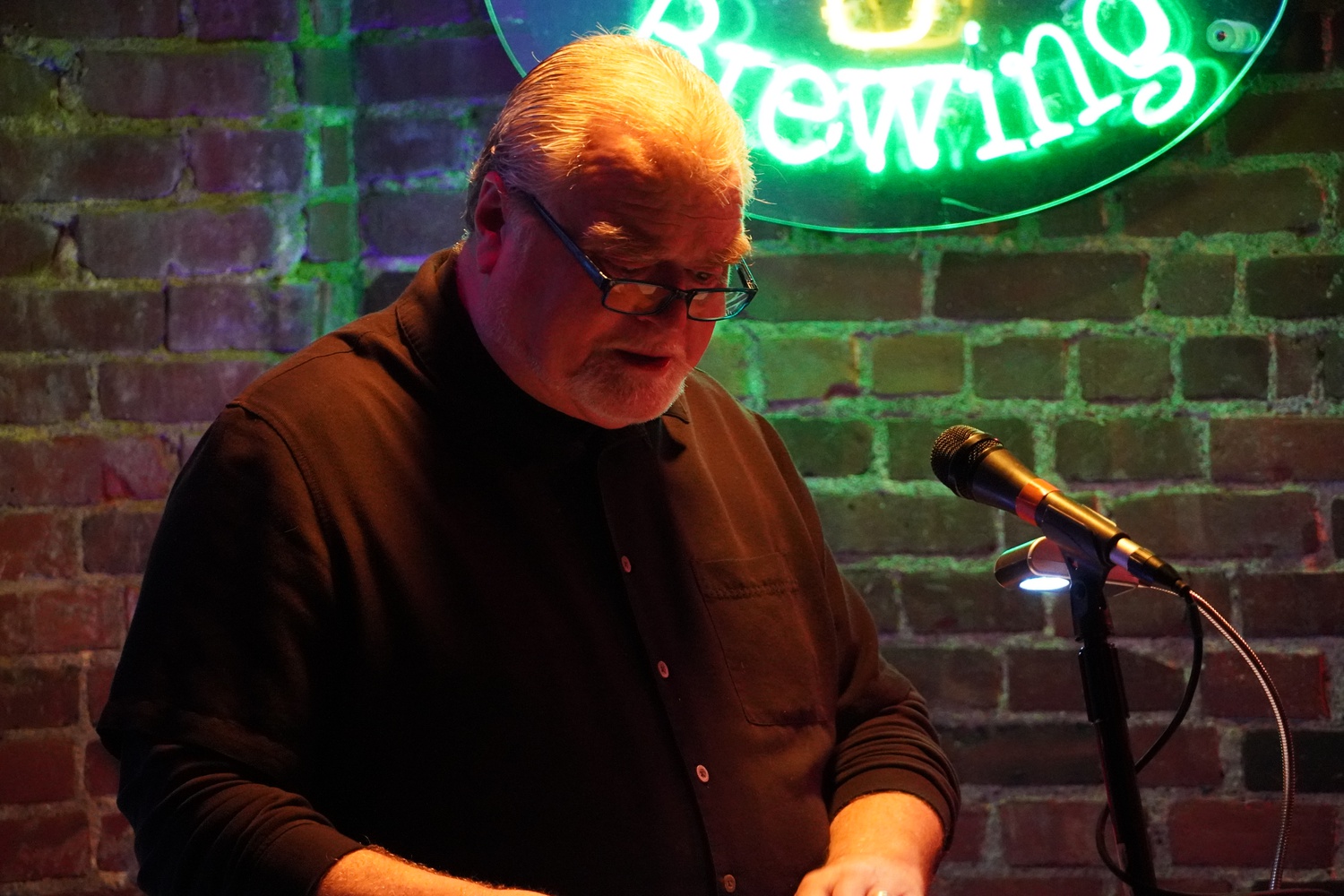 Odds M. Bodkin, master storyteller, has entertained audiences all over the world with his renditions of ancient and original tales. By Pei Chao Zhuo
Advertisement
Advertisement

A Master Storyteller Walks into a Bar

Bodkin’s enchanting voice, musical prowess, and larger-than-life persona have earned him an illustrious career as a master storyteller.
By Kya I. Brooks

“And then they steal this amazing ship called the Waistgold. All along its gunnels there are filigrees of pounded gold, and the ship’s wheel is encrusted in gems,” begins Odds M. Bodkin. “The pirate doesn’t know it yet, but this is a magical, very powerful ship.”

Bodkin’s enchanting voice, musical prowess, and larger-than-life persona have earned him an illustrious career as a master storyteller of 40 years, performing adaptations of ancient poems all over the world as well as writing original works. His travels now beckon him back to Harvard Square to perform at Grendel’s Den, a tavern-style restaurant and bar.

Storytelling wasn’t always his path. As a young man in New York City, Bodkin dabbled in various odd jobs — immersing himself in artistry and working as a freelance science educator for K-12 students on the side. But it always seemed like children were more captivated by his on-the-fly stories than by the scientific lessons he was giving.

“I just said, ‘gee wiz, you know, I think I’m going to become a storyteller.’ And I’d never heard of one. I thought I was the only storyteller on planet earth at that point,” he laughs. 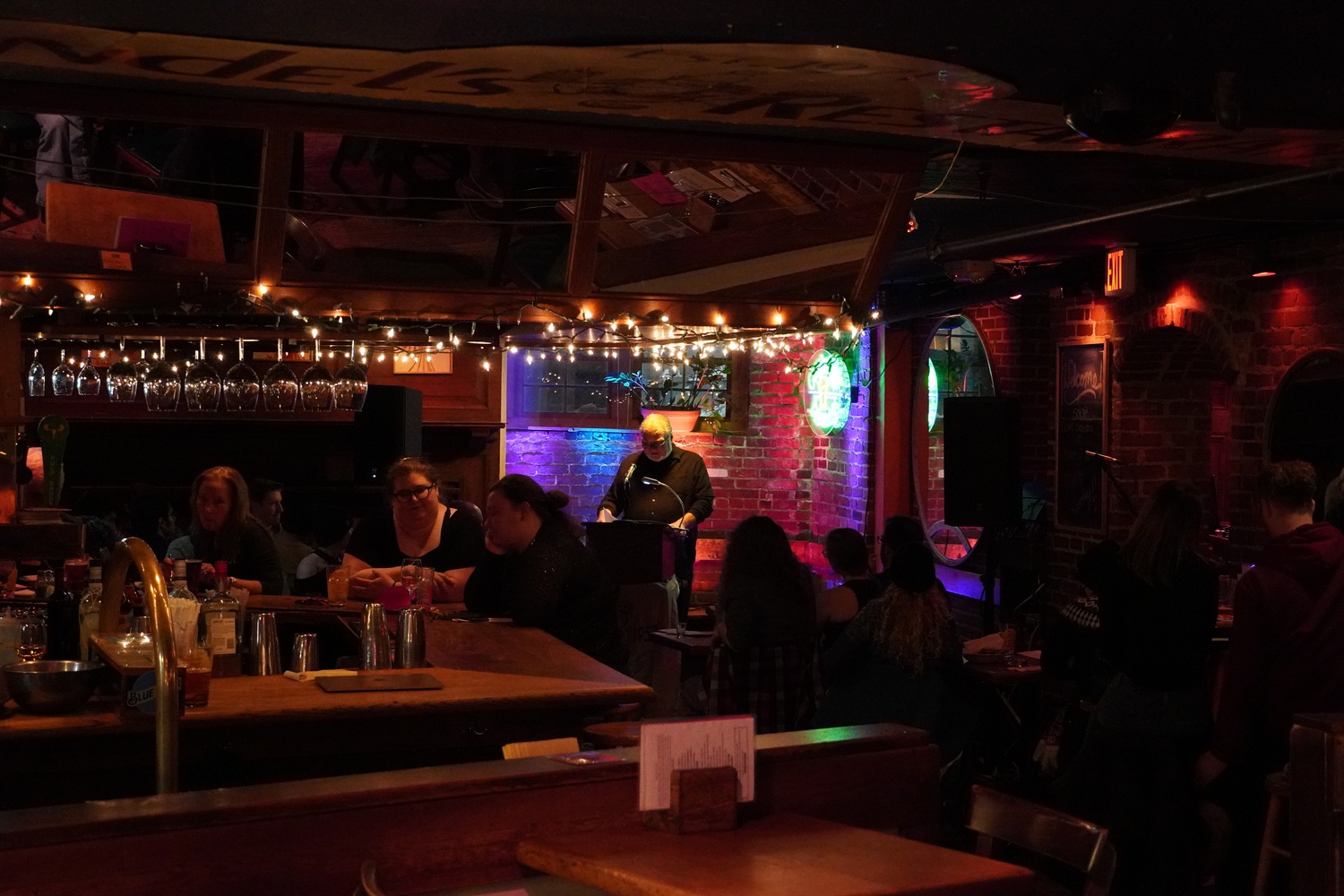 Armed with only tenacity and a jovial outlook, Bodkin made his debut in the creative field.

“I just hung out my shingle and said, ‘I’m Odds Bodkin. I’m a teller of tales. Hire me.’ And lo and behold, people began to do it,” he says.

And so began his ascension to international storytelling prominence. He contorts his deep, rich voice into about ten distinct character impressions per story. He is a versatile performer, his shows ranging from “Golden Rule,” which teaches elementary schoolers about empathy, to rock-and-roll renditions of the “Three Little Pigs” for kids, to sexy tales of swashbuckling pirate exploits — for adults only.

“They’re filled with character voices and vocal sound effects, and they have a full ongoing musical score on either twelve-string guitar or celtic harp,” he says of his adult tales. He also incorporates musical elements into his stories for children, breaking out his six-string guitar for the “Three Little Pigs.”

Bodkin says his storytelling, which has no accompanying visuals and relies solely on sound, still transports his audience. “People just become mesmerized. They become lost and delighted,” he says. “I almost disappear and they’re just watching their inner visions as they listen to these tales.”

He has traveled the world, performed at venues from the White House to the National Storytelling Festival, and published an impressive array of storybooks.

Bodkin’s return to Grendel’s Den continues a relationship that began with his first performance there six years ago. A coincidental link between the name of the restaurant and one of Bodkin’s poetic adaptations sparked the connection. The restaurant is named after the monster Grendel in the story of “Beowulf,” an epic poem Bodkin was planning to perform in 2016. When Grendel’s Den owner Kari Kuelzer learned of his plans, she had an epiphany. “We have to have this premiere at Grendel’s,” she recalls thinking at the time.

This was the first of many performances for Bodkin at Grendel’s Den, which brings him back every year to perform “Beowulf” and other tales. “People are just completely charmed by this unique sort of unicorn performance,” Kuelzer says. “You’ll never see anything like him.”

Bodkin’s ancient form of storytelling complements the atmosphere of the eatery. “I can’t think of a better place for a bard than Grendel’s Den, with its bricks and its old-school European vibe,” Kuelzer says. For each story Bodkin performs, she also crafts a themed menu relevant to the tale.

While Bodkin’s upcoming performances at Grendel’s recount traditional myths, his first performance in this series was a previously unreleased original titled “Voyage of the Waistgold.” Kuelzer calls it “a little bit of a departure from his usual format.” “This is a pirate tale, a tale of adventure on the high seas that is told in an ancient sort of dialect of mariner speak” without music, he says. The format of this poem also differs from his usual storytelling style, as he focuses solely on the language of his manuscript without any musical component or improvisation.

The concept of this poem has been floating in his mind since his twenties. “It’s a wild, wild story filled with cool high fantasy elements,” Bodkin says.

The poem begins when its pirate protagonist steals an enchanted ship and heads off to defeat a beast. “And so he’s on his way to do this when Queen Ood shows up,” Bodkin says. “And she’s young and she’s beautiful, and she wants her boat back.” And from there, the tale takes off.