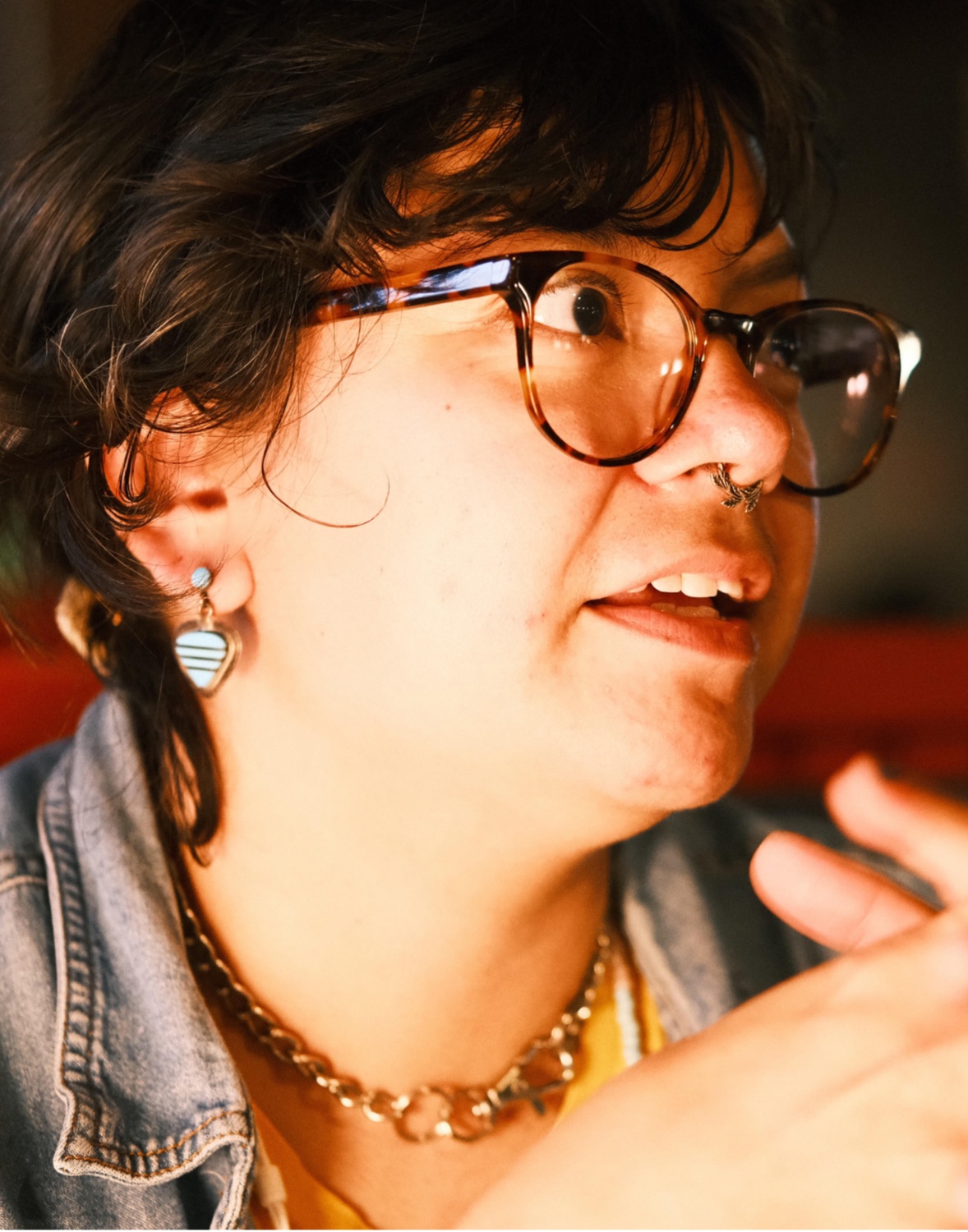 Their position carves out a distinct space in the world’s largest academic library system to focus exclusively on organizing, spotlighting, and acquiring materials in a field that has long been neglected.
By Kyle L. Mandell and Katie L. Sevier

In November of 2021, Julie Fiveash was hired as the Librarian for American Indigenous Studies at Tozzer Library — the first person to hold that position, they say. Their position carves out a distinct space in the world’s largest academic library system to focus exclusively on organizing, spotlighting, and acquiring materials in a field that has long been neglected.

Because the position is so new, it remains malleable; Fiveash, who is Indigenous themself, describes the opportunity as both “exciting” and nerve-wracking. “I want to do a good job, and I want this job to continue,” they say. “I want to make it clear that this job is needed on campus.”

In their work, they mainly seek to help researchers find and navigate Indigenous collections for their projects. Fittingly, much of their past research looks at the ways we discuss, label, and present Indigenous materials.

What this can look like varies day to day. “I’m encompassing Indigenous Studies, which is everything from English to architecture to math,” Fiveash says.

They plan to concentrate their energy on increasing the accessibility of the University’s Indigenous materials.

In addition to bringing awareness to their role through outreach to groups like the Harvard University Native American Program, they are interested in digitizing several collections to facilitate easy use. At the same time, they hope to prioritize sensitivity. For instance, in some collections run by Indigenous archivists, items receive “TK” labels — traditional knowledge labels — which indicate either only certain people in the community should access them, or that anyone can, but should do so in a particular way. The University has never made use of such labels before, but Fiveash is intrigued by them. Fiveash also hopes to facilitate “community collaboration” on archival materials, allowing community members to leave digital comments on items that interest or are relevant to them.

Fiveash’s path to Indigenous librarianship began with something unexpected: comics.

Growing up Navajo, Mexican, and white, Fiveash struggled to reconcile their disparate identities, and they often expressed their conflicted feelings in comics.

To Fiveash’s surprise, one of their zines, — “‘Why Can’t You—’ A Comic About Multi-Racial Identity,” — touched more people than they anticipated, and sparked conversations about identity that they wanted to continue facilitating.

Fiveash has been creating comics since their freshman year at Dartmouth College, where they graduated with a degree in Studio Art. Post-graduation, Fiveash moved to San Francisco and worked at a comic book store for a few years. They hoped to run a comic book store themselves but started working at a public library with tentative plans to one day break into that tough market.

At one Indigenous Comic Con, where Fiveash was promoting their zines, someone told them that Indigenous librarianship could be a way to combine their interests both in comics and bookkeeping. “A thing I got very good at was suggesting comics to read. I would have to gauge what someone’s interest was, and then I would be like, ‘Okay, I know what comics you want to have.’ And so that actually translates incredibly well to librarianship,” Fiveash says.

And so they entered the world of Indigenous librarianship, enrolling in UCLA’s Master of Library and Information Science program in 2019. At a conference for the Association of Tribal Archives, Libraries, and Museums, they met librarians from many other institutions, ranging from the National Museum of the American Indian at the Smithsonian to local community libraries. They were inspired by the resources their fellow learners and researchers provided through, and envisioned for, their libraries, and they wanted to add on to this work.

During their second year of graduate school, Fiveash conducted social media outreach for the UCLA American Indian Studies Center Library. They then came to Harvard under the Harvard Library Diversity Residency Program, an initiative to attract librarians from historically underrepresented groups.

Coming to Harvard “wasn’t an easy move” for Fiveash, because it meant being far from their family and friends. But ultimately, they decided that the tradeoff was worth it. “I knew that if I got this position, it would mean a lot in terms of what I was going to learn because Harvard has the largest academic library in the world,” they say. “So I knew I would have to make the sacrifice to learn as much as I can from one of the best places to do that at.”

At Harvard, Fiveash hopes to expand interest in the University’s Indigenous materials beyond historians and researchers. Most of these collections are concentrated in the public-facing Tozzer Library, but are under-accessed by the public. They would like to create a “friendly and welcoming” space for people to explore the collections — for example, they hope to share Indigenous comics, zines, and cookbook recipes on the first floor so that visitors who walk into the library can easily engage with them. They say it’s important for people to connect with Indigenous history and present-dayIndigenous experiences in order to “get away from the idea of us being an extinct species.” One way they imagine doing this would be through expanding Harvard’s collection.

Ultimately, Fiveash feels grateful to have cinched this “dream job” that allows them to learn from Harvard’s resources as well as highlight American Indigenous work. Though they’re not quite sure what they want to pursue when their time here comes to an end, they hope to, bring what they’ve learned back to their community.

— Magazine writer Katie L. Sevier can be reached at katie.sevier@thecrimson.com.