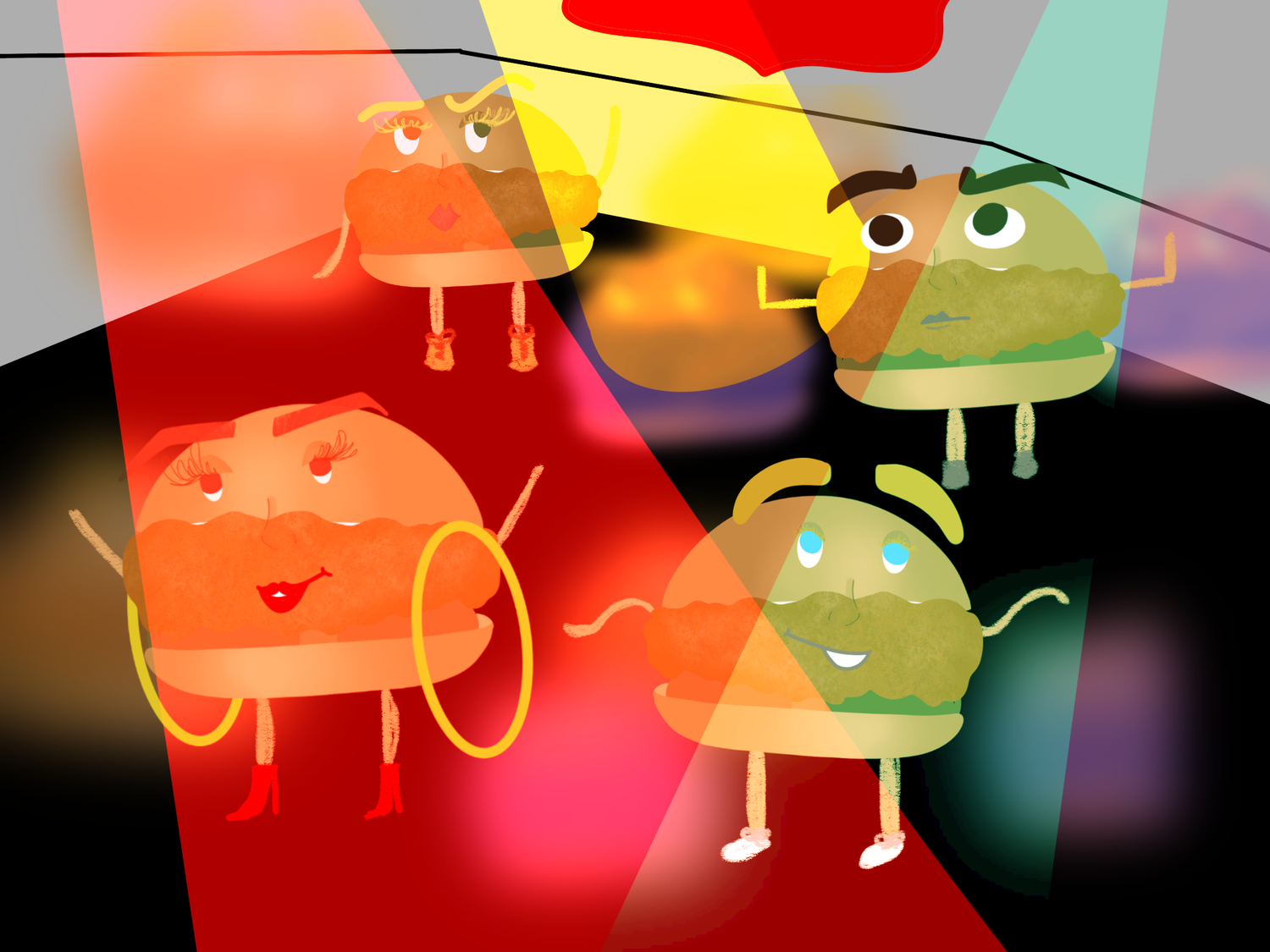 There I stand, on the corner of Mt. Auburn and JFK St, in a pool of my slightly inebriated peers, all of us fidgeting with our phones, eavesdropping on the bouncer’s conversation with the group that’s arrived just before us. Turns out we can get in by Venmoing some guy five dollars.
By Sam E. Weil

I did not come to Harvard for the party scene.

I am reminded of this fact often — particularly when I find myself caught up in the frenetic current of freshmen looking for a party — any party. This current might pull me, barely a minute after I arrive, toward the exit of a sparse HUFPI-sponsored gathering in a random Dunster common room. It might carry me to the porch of a faraway rugby mixer, only to find buff, irritated upperclassmen too distracted to tell us that we won’t get in.

And without fail, the current will take me to Tasty Burger. There I stand, on the corner of Mt. Auburn and JFK St, in a pool of my slightly inebriated peers, all of us fidgeting with our phones, eavesdropping on the bouncer’s conversation with the group that’s arrived just before us. Turns out we can get in by Venmoing some guy five dollars.

We’ve had a long week. It’s Friday night. Isn’t this the time for us to get wasted and partake in classic college debauchery? Haven’t we outgrown loitering in throngs along the river? So we press “pay” and descend into the Tasty Burger basement.

We breathe in the thick, sweaty air, our chests thumping to the beat of Rae Sremmurd’s “Come Get Her.” At first, the whole scene feels novel— a secret party underneath a nondescript burger joint. “The first few times, it was something I just didn't expect — for a club to be in the bottom of a burger place,” says Kai H. Reed ’25. It’s dark enough that the 2010s-era hipster murals adorning the walls are barely visible. The hot ambiance and bass-heavy music almost give you the sense that you’re in a club.

As Alexandra D. Lenzo ’25 recommends, “you just have to get prepared to get sweaty and into the dancing mood.” And I absolutely am. I clasp my friends’ fingers as we drag ourselves into the crowd. We snatch drinks from friends, move our hips and tip our chins up to belt out the song lyrics. Soon, our hair is slicked with sweat, our shirts stick to our skin, and our eye makeup somehow transfers onto each others’ cheeks. Those first few Tasty Burger nights, we’d ascend those steps breathless, feeling like we’d done it: we’d finally found a good party.

As masses of freshmen began flocking to Tasty Burger each week, the space became a dependable party spot. “If I didn’t have anything to do, there was always something at Tasty,” Alma C. Russel ‘25 says.

But as the year went on, freshmen crowded the basement with such frequency that its luster started to fade. Gabe C. Hostin ’25 reflects, “I’m not gonna lie, after the first three times, I realized, why do I come here to get sweaty and jump around?” To Oreck N. Frazier ’25, the experience of going to Tasty Basement deteriorated “like an overplayed song.” He continued, “People would hear ‘Tasty Basty’ and then be like, ‘What? No, I’m not going to that.’ And they would try to find better things to do.”

At some point toward the end of the fall, the Tasty Burger basement was dubbed “Tasty Basty,” a term uttered with a tone of irony and self-deprecation.

“Tasty is just a gathering of people looking for somewhere to party, but no one really has a purpose. Why Tasty? No one knows. You just go to Tasty,” says Raquel E. Segars ’25. “Then you get downstairs and it's just the same underwhelming group of people not doing anything.”

Evelyn J. Carr ’25 attributes some of her dissatisfying party experiences to her peers’ approach to partying itself. “Everybody has a vision of what they think a college party is going to look like. They want to be seen in a certain place, and they want it to be better than other people’s nights,” she says. “Then when they get there, and it isn’t fulfilling every single expectation that they had, they feel embarrassed to be there and disappointed that it wasn’t what they were hoping for.”

The vast majority of freshmen that I interviewed described that when they first came to college, they harbored unrealistic expectations about the party scene, influenced by the movies they saw growing up or stories from friends at other schools. But even as those expectations are disappointed, we still hold out the hope that we’ll find something fun, so we allow the current to take us to dud parties. When the clock strikes 12, Tasty Burger’s doorway is a bottleneck of shiny-faced, swaying party-seekers desperate to cap off their evening with something.

One or two of my Tasty evenings have passed by in a multicolored, tequila-tinted haze. Others I’ve spent weaving through the greasy mass of predominantly white bodies vertically hooking up. I’ve found myself standing at the bar, bearing witness to yearning eyes darting to various corners of the room, hands running through hair. Side hugs and selfies, swerving hips, and “did we really just pay $5 to be here?”

The Tasty Burger basement’s reputation as a dependable party spot for freshmen is a new phenomenon. While an occasional function was held there in the past, upperclassmen never considered it “the move” during their freshmen years.

“I would hear of one-off events there, but now, I hear about it all the time,” Menat N. Bahnasy ’22 says. “I have PAFees who’ll tell me that they're going to Tasty Basty, and the first time I heard that I was like, ‘What on earth is Tasty Basty?’”. When they explained it to her, she recalls, “I was definitely shocked … I had no idea so many events took place there.”

“Tasty Burger definitely wasn’t the spot. I never went to the basement once,” David G. Hill ’23 says. He remembers that the Harvard freshman social scene centered around dorm parties, with the occasional trek to The Pfoho Igloo or The Cabot Aquarium, and he found out about parties held at other schools through the Black community.

Skander K. Fourati ’24 chalks this shift up to Covid policies changing the culture of social life. “The tradition was lost,” he says. “I think freshmen just want to party anywhere, and if there’s no Quad, they end up in Tasty Burger. It just makes sense.”

Reed notes that the inaccessibility of on-campus spaces contributes to his frustration with the freshman social scene. “I feel like Harvard doesn’t have that many great spaces to party at,” he says. “Freshmen obviously can’t get into final club parties.”

Tomi J. Webber ’25 expressed similar dismay. “All of the parties are pretty exclusive in that they’re not widely shared. You have to know someone who knows someone who’s going somewhere and that’s how you get your information,” she says. “Everyone’s always asking around for a move. That whole experience of working to find a party is super underwhelming for me.” Tasty Basty becomes the inevitable fallback.

Hill believes, though, that the freshman party scene has always been underwhelming, pandemic or not. “But if you know where to tap into — if you’re a part of, for example, a club sports team, a cultural organization on campus — there’s definitely a way to have a good time.” Hill highlighted the many successful parties held by cultural organizations such as the Black Students Association.

One Tasty Burger party was enough for Norah R. Ostin ’25, who gravitates toward parties more intentionally advertised to the cultural groups she’s a part of. “I know that they’re the parties I'm looking for, just because there’s a lot more dancing,” Ostin explains. “I’m not going to put myself in the position where I might have fun for, like, five minutes, and then be bored and sitting in the back because they’re playing a song I don’t like.”

By contrast, Segars appreciates the intentionality that goes into BSA parties — the themes, advertising, and hired DJs. “They make real events out of every party,” she says.

Hill agrees and says that the wider Harvard culture pays less attention to the social events of specific cultural groups. “A lot of the cultural orgs on campus do a good job of providing a fun space as well as a fun atmosphere, and I wish more people were able to tap into that,” he says. “But I just think it’s not the focal point of the culture of the institution.”

Maybe the frenetic freshmen current only guides us to the places we’re aware of —the spots we’ve heard about through word of mouth in our fairly insular circles.

Frazier finds that on some Friday nights, “you’re just in a common room with your friends talking, having deep talks. That’s really how I got close with a lot of my friends, instead of going to the parties that I expected to go to.”

And while I’ve had my fair share of raucous, drunken evenings, and I’m sure I’ll have many more, when I look back on my twenty-and-change weeks here at Harvard, those nights don’t even come close to ranking among my most fulfilling experiences.

The more time I’ve spent resisting the current’s pull, the more I’ve found myself in wonderfully random and far more memorable situations. Lightly imbibing and smack-talking my Bananagrams competition in my common room. Flitting about Cambridge Common’s playground to Bobby Womack’s “Fly Me To The Moon (In Other Words).” Sitting on a roof and beholding the skyline, imagining the complex, beautiful lives playing themselves out inside of each window.

— Magazine writer Sam E. Weil can be reached at sam.weil@thecrimson.com.