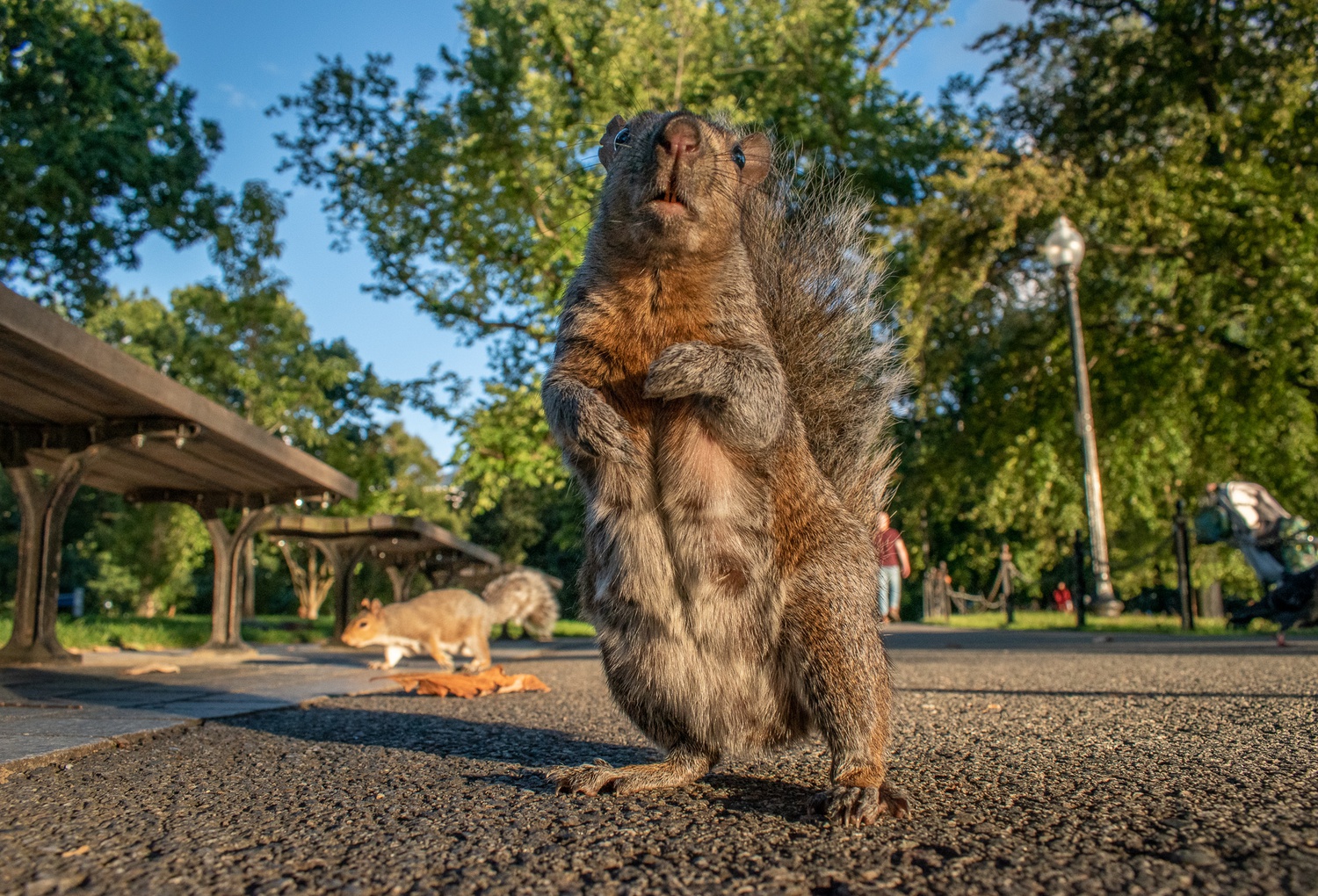 Where the Wild Things Are: The Urban Ecology of Harvard Square

To the squirrels, turkeys, and geese that make their homes here, we are mere guests for four years. FM set out to honor our gracious hosts by investigating their history and capturing their daily life. While doing so, we uncovered some pretty neat stuff.
By Sammy Duggasani and Kendrick N. Foster

First-years, sophomores, and juniors will experience spring on Harvard’s campus for the first time this semester. New England’s flowers come into full bloom, the concrete jungle aesthetic yields to green grass, and undergraduates emerge from midterm-induced stupors to actually enjoy the landscape.

Though Harvard’s humans are making their springtime debut, for campus fauna, it’s not their first cotillion. To the squirrels, turkeys, and geese that make their homes here, we are mere guests for four years.

FM set out to honor our gracious hosts by investigating their history and capturing their daily life. While doing so, we uncovered some pretty neat stuff.

In 2011, a (now defunct) student project aimed to collate an archive of Harvard Squirrels over the centuries, and in 2013, the Huffington Post declared Harvard one of America’s “most squirrel obsessed colleges.”

But the squirrel’s prominence in Harvard’s culture has figured since at least the Great Depression.

On January 11, 1938, student Bernard D. Shea ’41 innocently held out unpopped popcorn to an interloping squirrel. Instead of eating the popcorn, though, the squirrel took a bite of his index finger.

By 1941, squirrels had switched from menacing pests to saviors in The Crimson’s annals, when it reported that a “chivalrous squirrel” protected “three damsels in distress” from an overactive laundry salesman.

Since then, squirrels have definitely stirred up campus controversy: One Crimson headline from 1996 provocatively asked, “Are Squirrels a First-Year’s Friend? Or Are They Only Glorified Rats?”

Friend or foe, today it seems almost impossible to walk around the Yard without encountering one of these tall-tailed tree huggers. 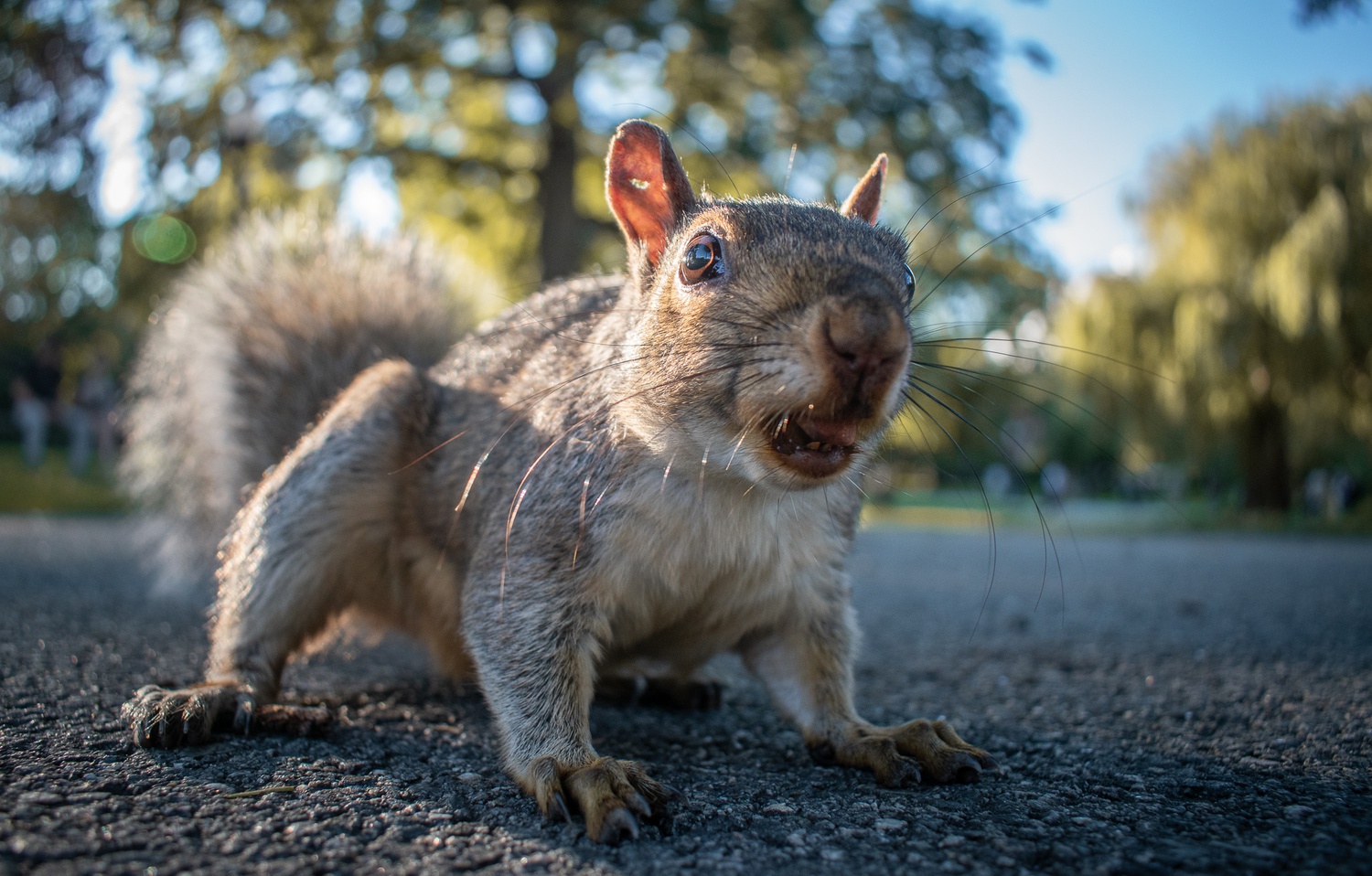 Closeup of a squirrel. -

A squirrel towers over its square of pavement. - 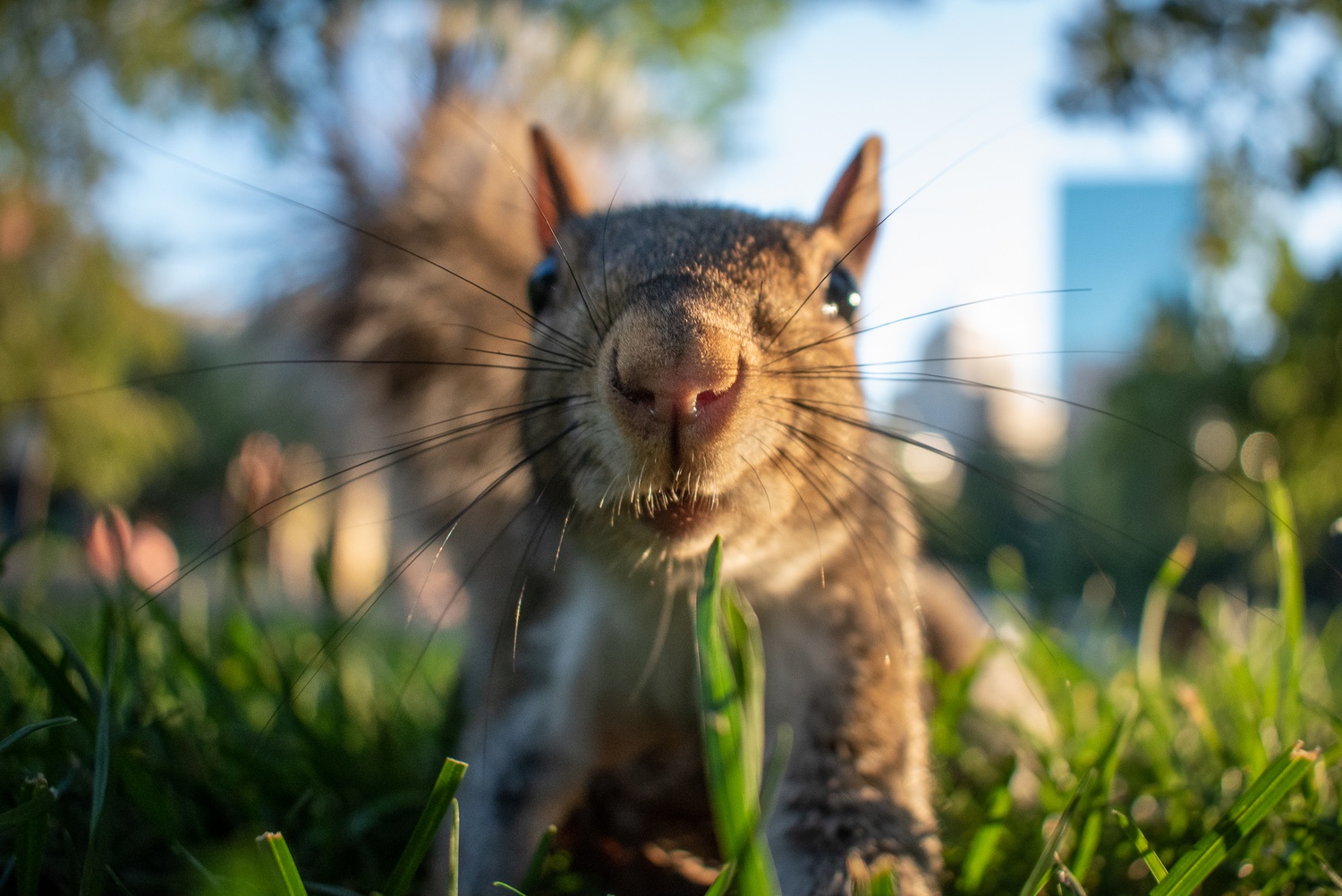 A squirrel plays in the grass. - 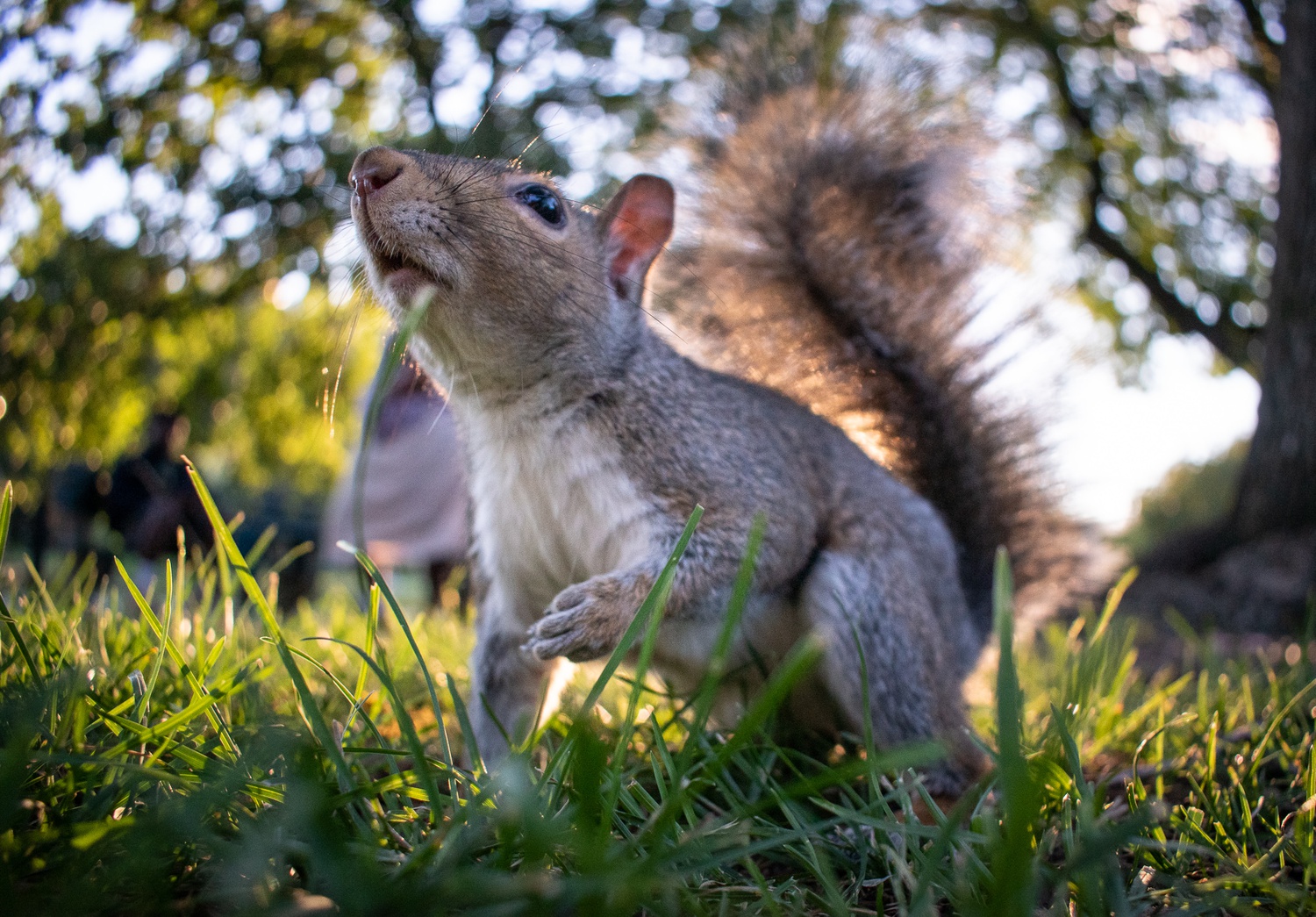 Eastern gray squirrels are a common sight in Harvard Yard. - 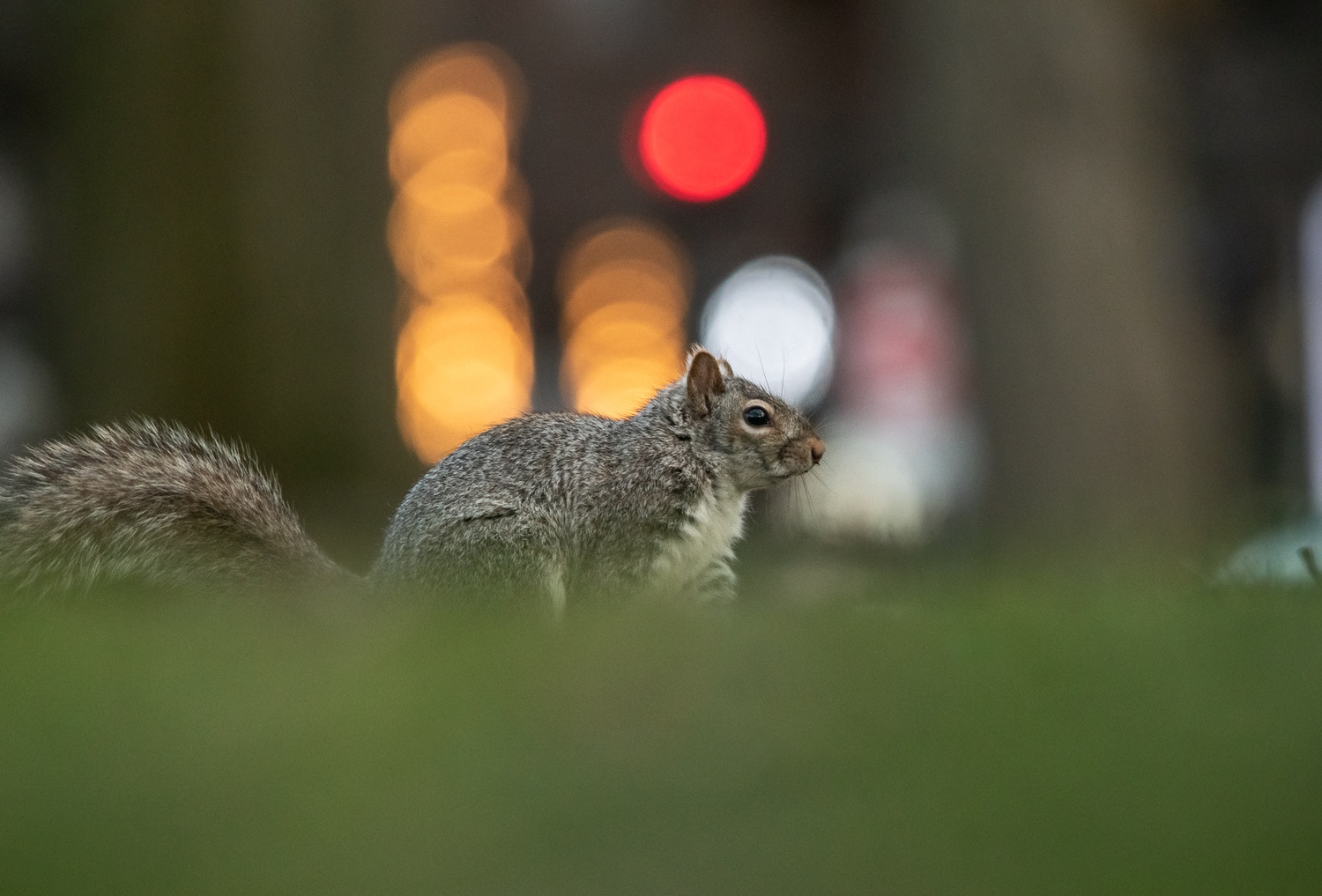 A squirrel in the grass. -
By Ben Y. Cammarata

We asked Jason W. MacKay, a landscape services supervisor at Harvard, if he had any insight into squirrels’ iconic status. Although he could not say for sure, MacKay did point out their ubiquity across campus. According to MacKay, Harvard Yard has enough mature oak trees to support a large resident squirrel population. “They produce an abundance of acorns that it’d be hard to not be attracted to Harvard Yard,” he says.

Science historian Etienne S. Benson adds some context to MacKay’s intuition in a December 2013 article for the Journal of American History. According to Benson’s article, squirrels did not have the conditions for growth in the northeast until the 1870s, with the rise of the urban parks movement spearheaded by Frederick Law Olmsted.

Indeed, squirrels did not become ubiquitous until the early 20th century, when public land around Cambridge, where squirrels ran the risk of getting shot, gave way to private land, where homeowners often fed squirrels they found on their property. In turn, this shift led squirrels to migrate from their natural habitats around Mount Auburn Cemetery to the manicured urban habitat around Harvard Yard.

Whatever their origin, Harvard squirrels have now made their way into popular culture: In a 2001 episode of the cult TV series “Gilmore Girls,” Rory Gilmore and her mother, Lorelai, visit Harvard and bring back photos — including one of a “Harvard squirrel … sitting on a Harvard rock.” Family matron Emily Gilmore replies, “Good grief.”

As temperatures rise above freezing and the sun sets at a reasonable hour, one Canada Goose is exchanged for another. All along the Charles River, these birds announce their homecoming with honking fanfare. Their reputation precedes them, as any picnicker knows.

Unlike the beloved squirrel, these migratory birds don’t have the best image. In fact, because Canada geese frequent residential and suburban areas and because their fecal matter poses public health concerns, the Massachusetts Division of Fisheries and Wildlife provides residents with a number of tips for warding them off.

In a list of the most effective strategies to deter unwanted geese, they mention using “decoys” that resemble a “full bodied swan or coyote.” It is of utmost importance, they point out, that these decoys are moved “periodically”; otherwise, they warn, “the geese will realize the decoys aren’t real.”

One Boston-area company named Geese Police uses a “proprietary system of harassment” with “trained border collies” to reduce the goose population by at least 90 percent. 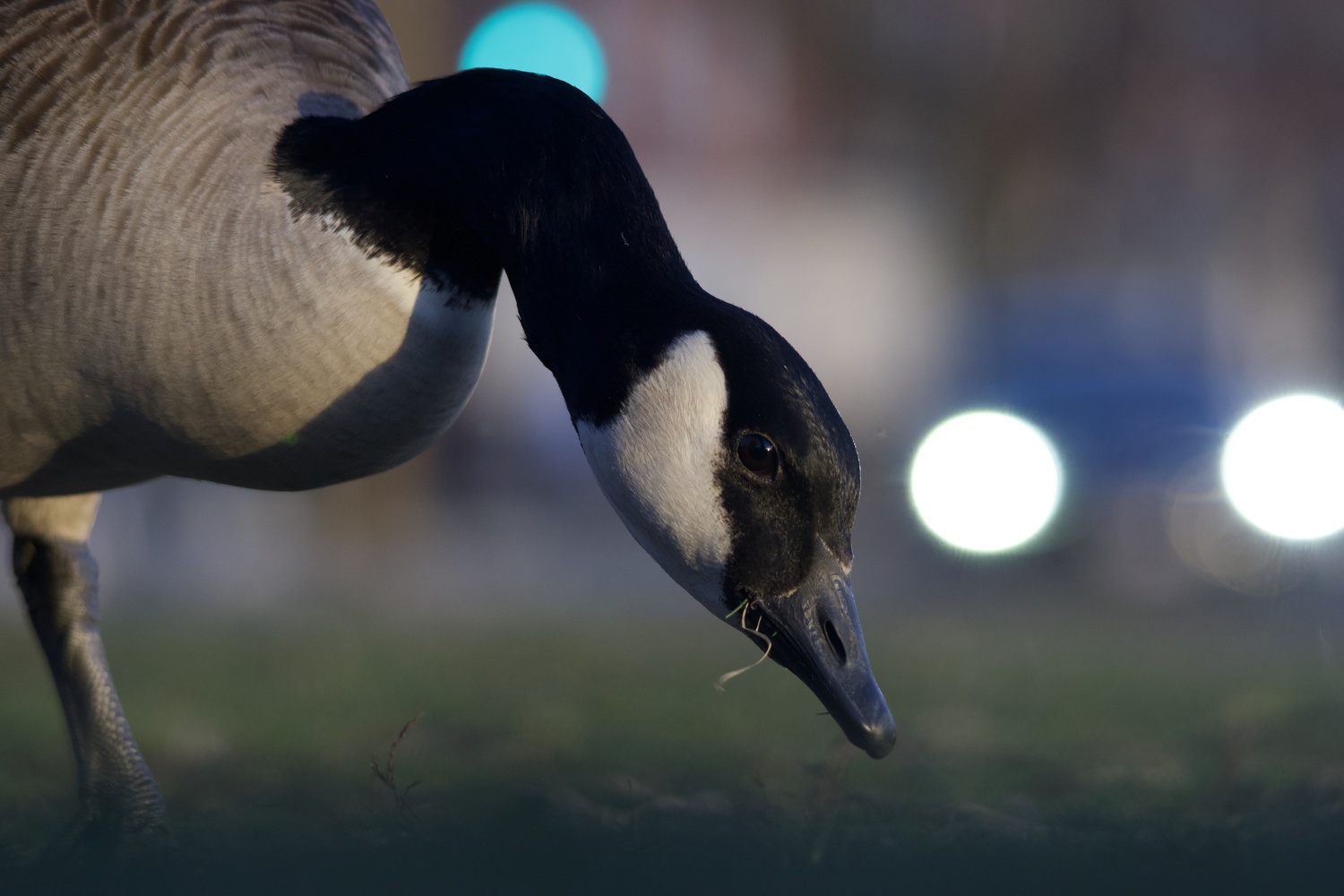 Closeup of a goose. - 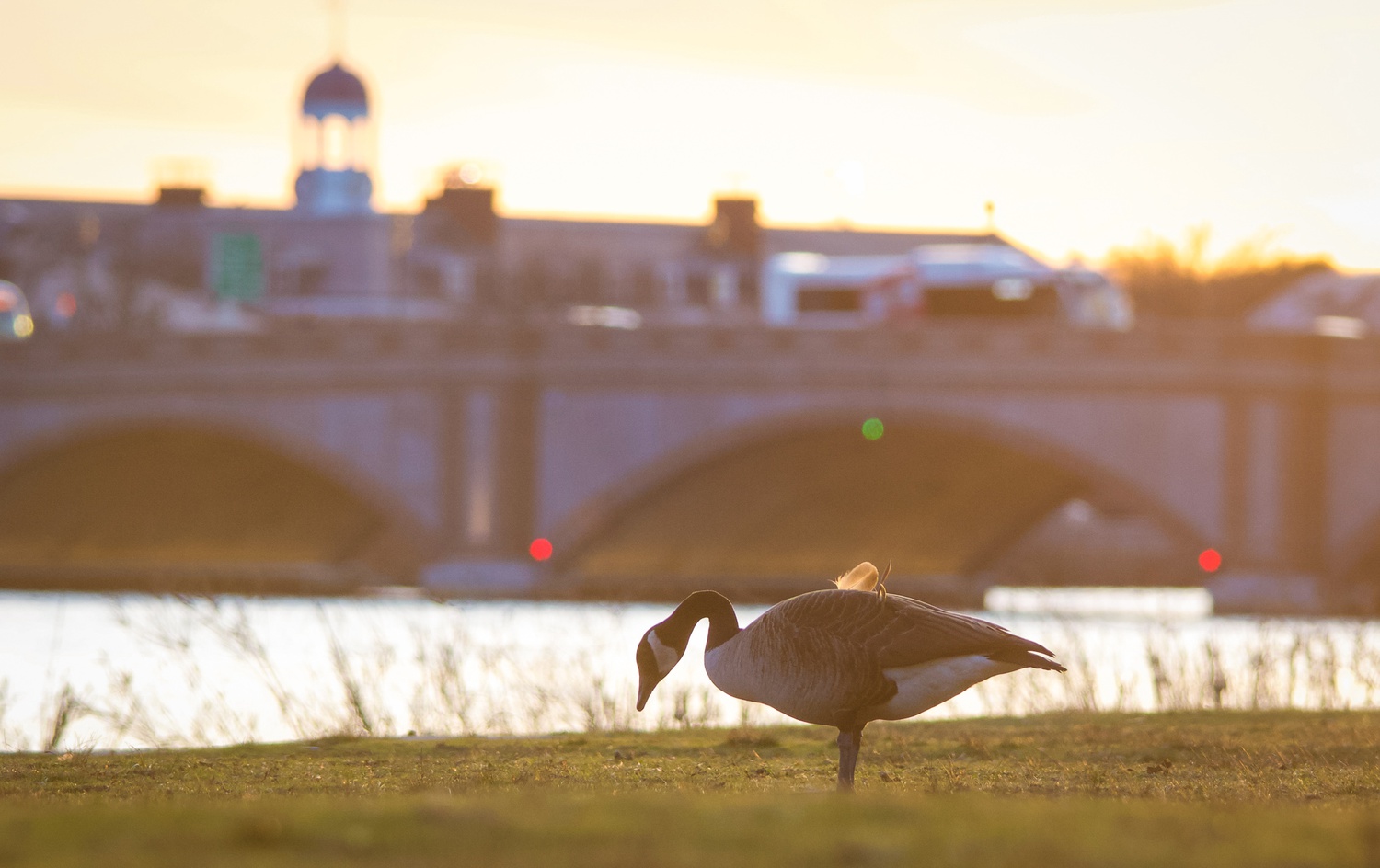 A goose silhouetted by the Charles. - 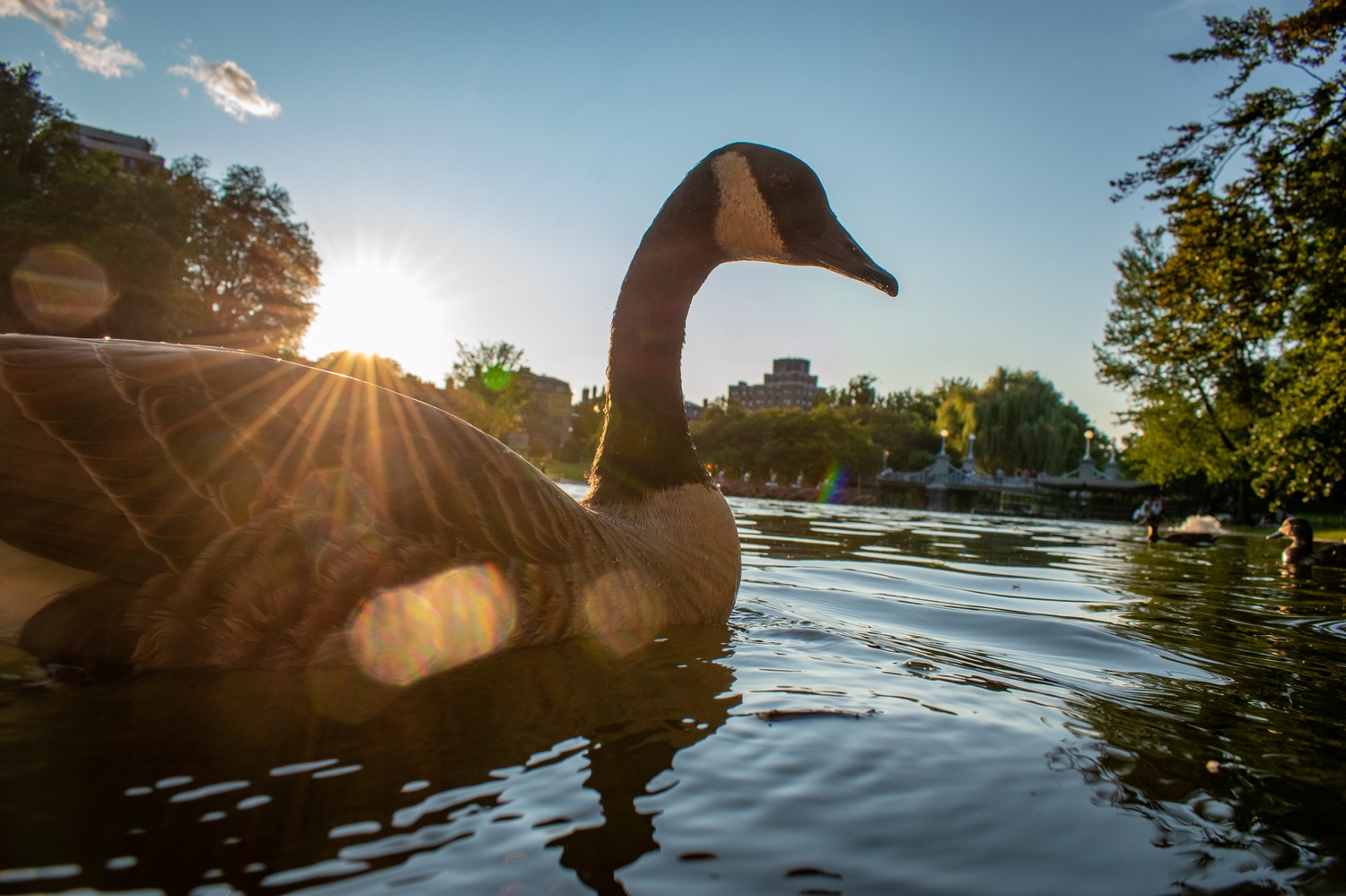 A goose enjoys the Spring sun. - 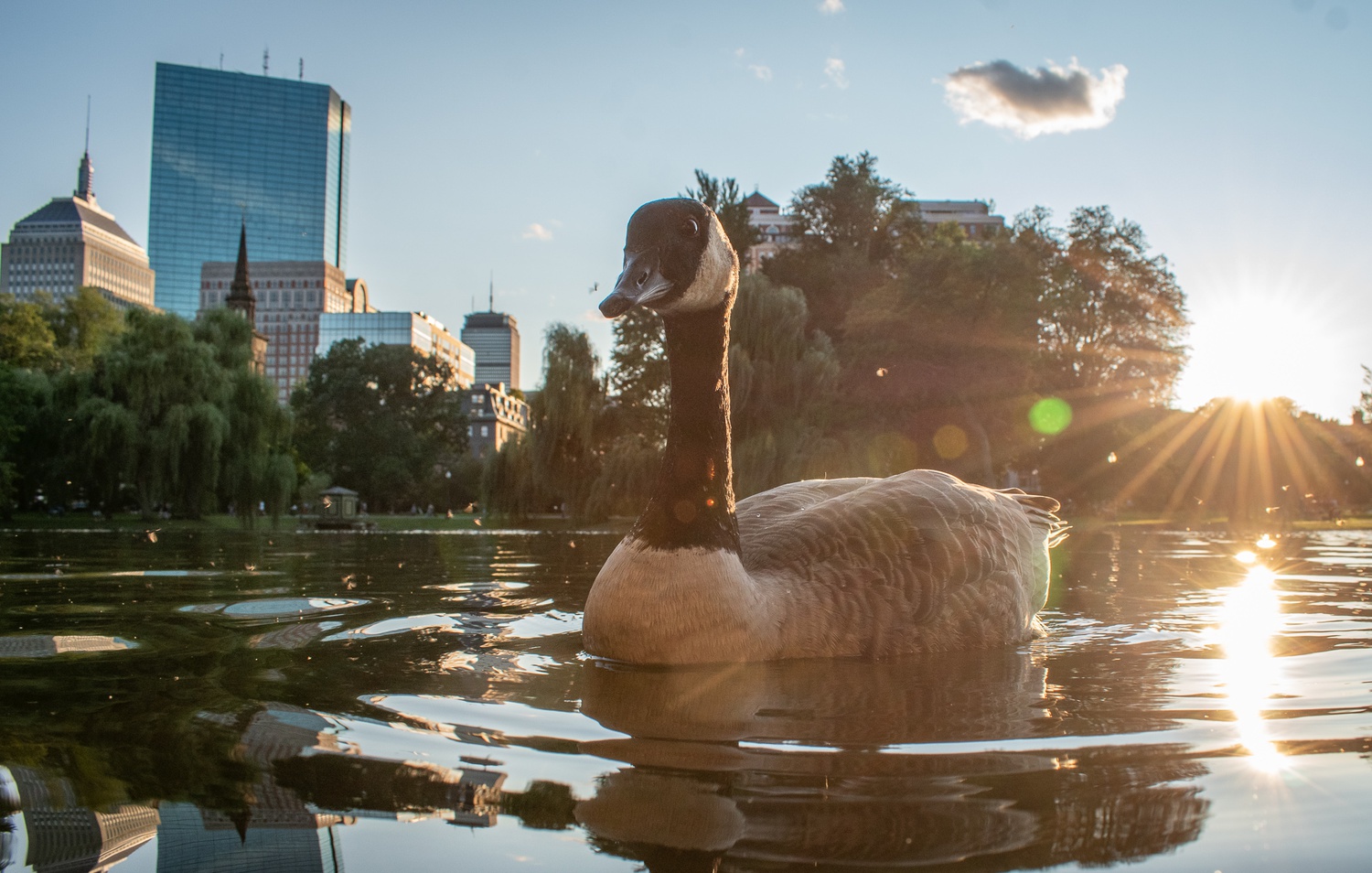 A Canada goose glides across the pond on the Boston Common. -
By Ben Y. Cammarata

Canada geese are severely overpopulated in the Boston area. North America has seen their population explode from about a million in 1970 to over five million in 2012. Along with that growth comes a shift in the ratio of migratory to nonmigratory geese: though the latter group made up only 20 percent of all Canada geese in 1970, they soared to 68 percent in 2012.

Before the 1930s, the geese were characterized by their seasonal migration patterns and rarely nested in Cambridge. But now, Cambridge, like many other American cities, hosts more resident geese as they opt for the warmth of urban environments.

Unless you plan to walk barefoot along the Charles, they do not pose much of a threat. For now, it seems that the Canada geese are here to stay, so we might as well appreciate their beauty.

To first-year students living in the Yard, opening the door in the morning to find a turkey perched on the steps is not an uncommon phenomenon. An intriguing sight for tourists visiting campus, the birds have now become an icon.

Despite their ubiquity, the turkeys have not always had a place on Harvard’s campus.

Intense deforestation and overhunting that began in the 1600s deprived wild turkeys of their habitat and food sources. By the mid-1800s, they were dangerously close to extinction, a status which lasted for about a century before conservation efforts were successful. In the 1970s, 37 wild turkeys brought from New York’s Adirondacks began the revival of the species in Massachusetts, according to the National Audubon Society.

Over the next few decades, they expanded their territory from the Berkshires, where they were first released, to the Cambridge area, reclaiming an ancestral home. While the forest of Massachusetts housed their predecessors, the urban environment took in today’s turkeys. 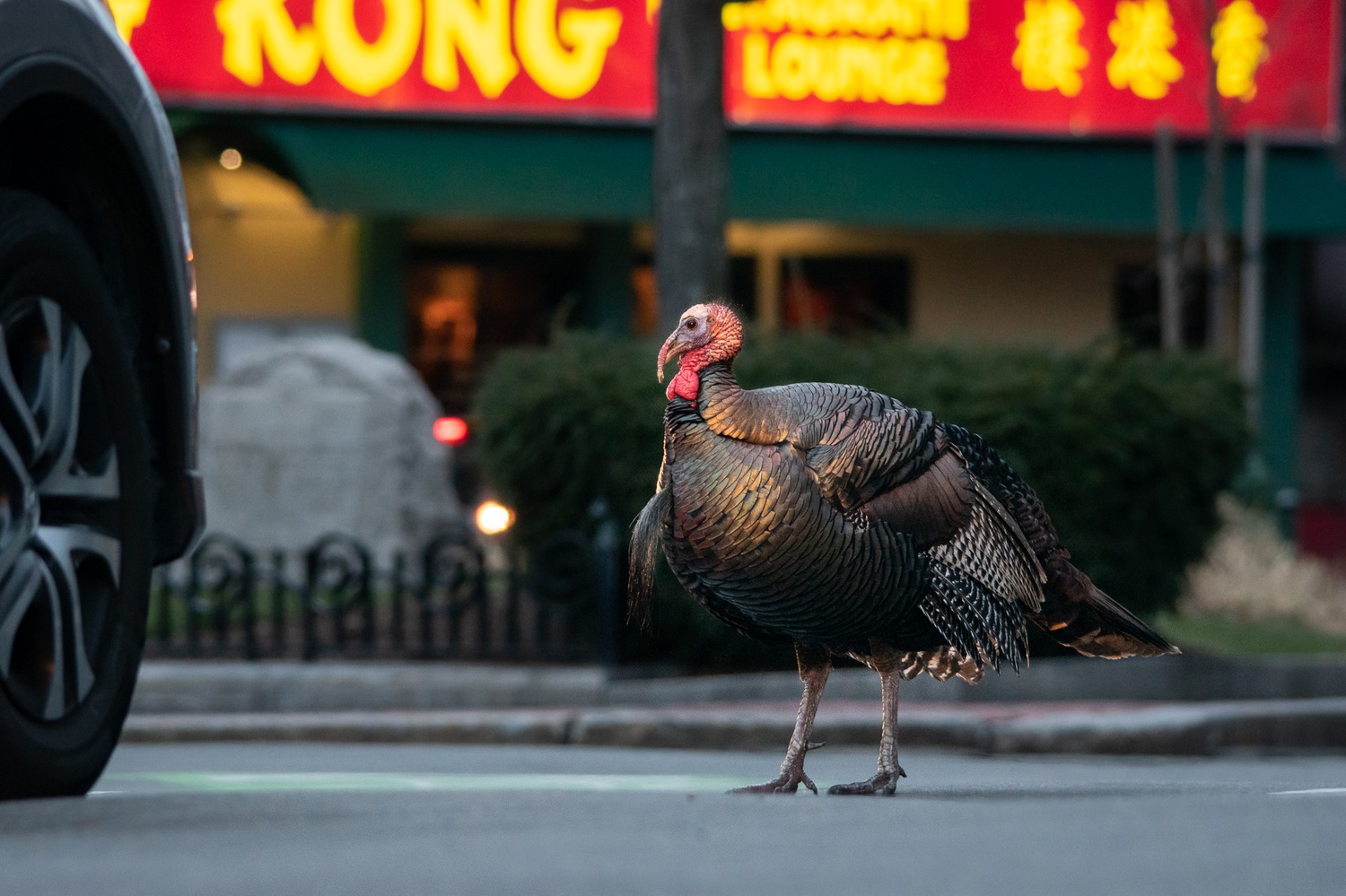 A turkey struts across the road in front of Hong Kong Restaurant. - 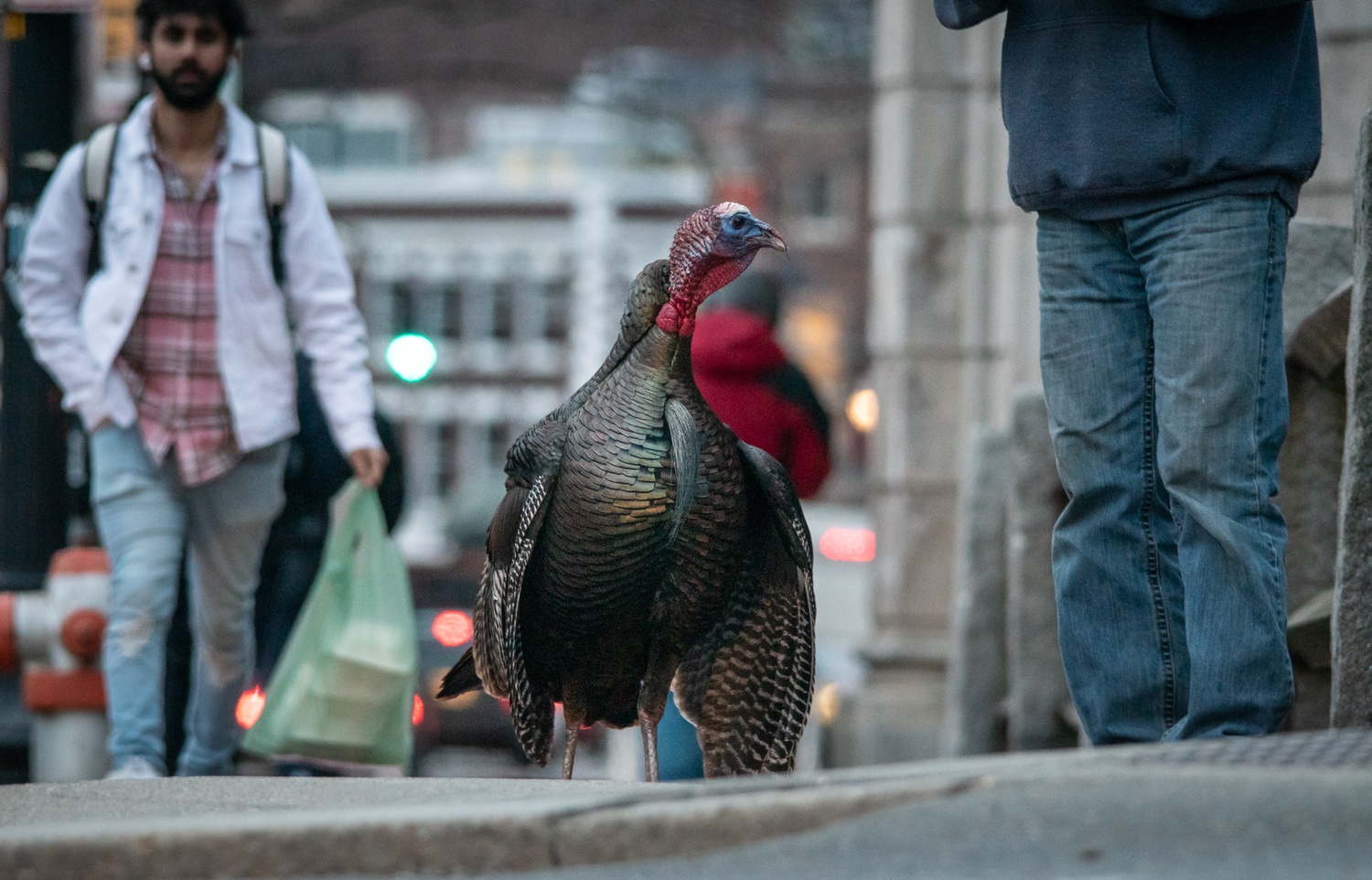 A turkey roams the streets. - 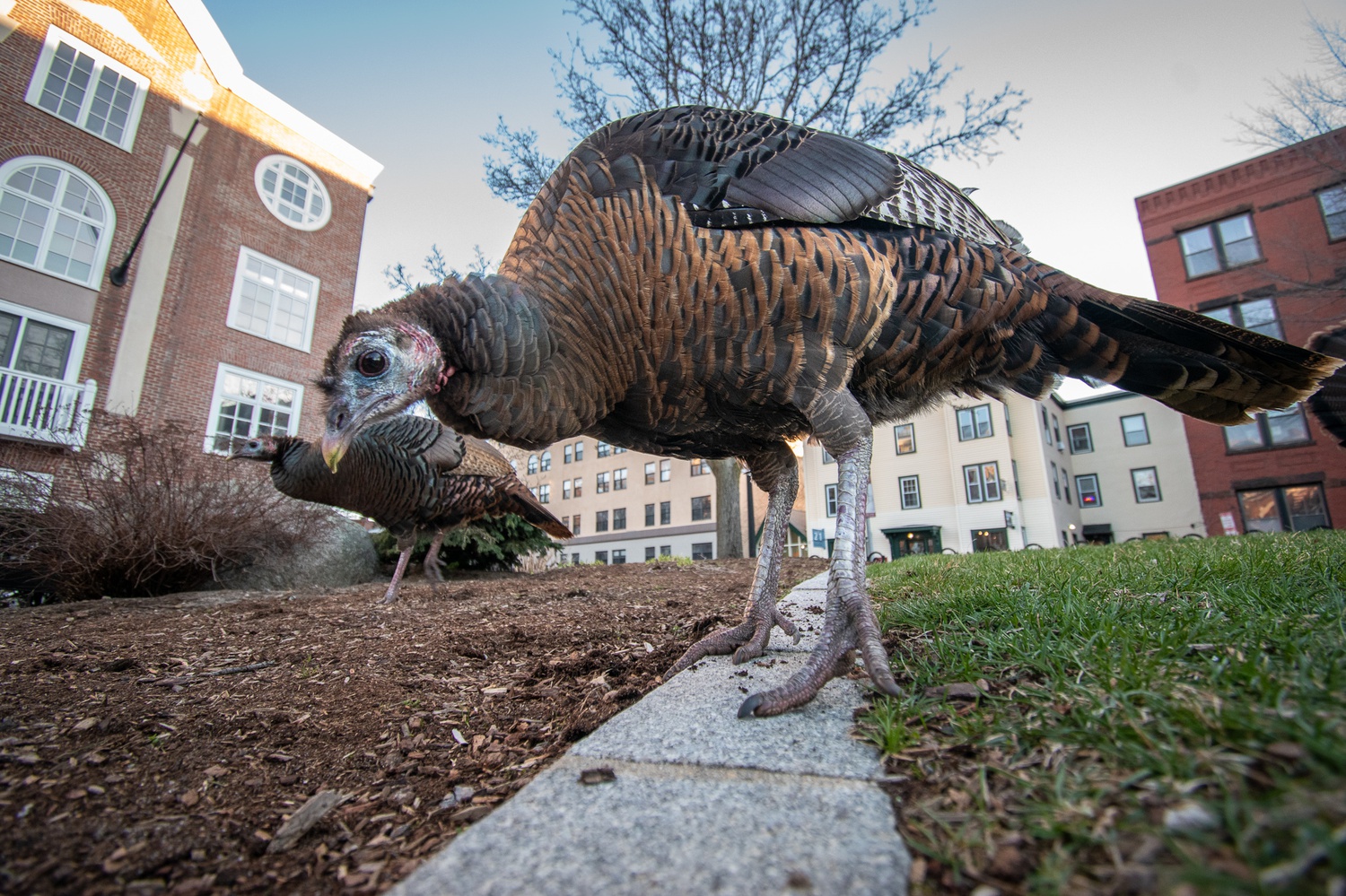 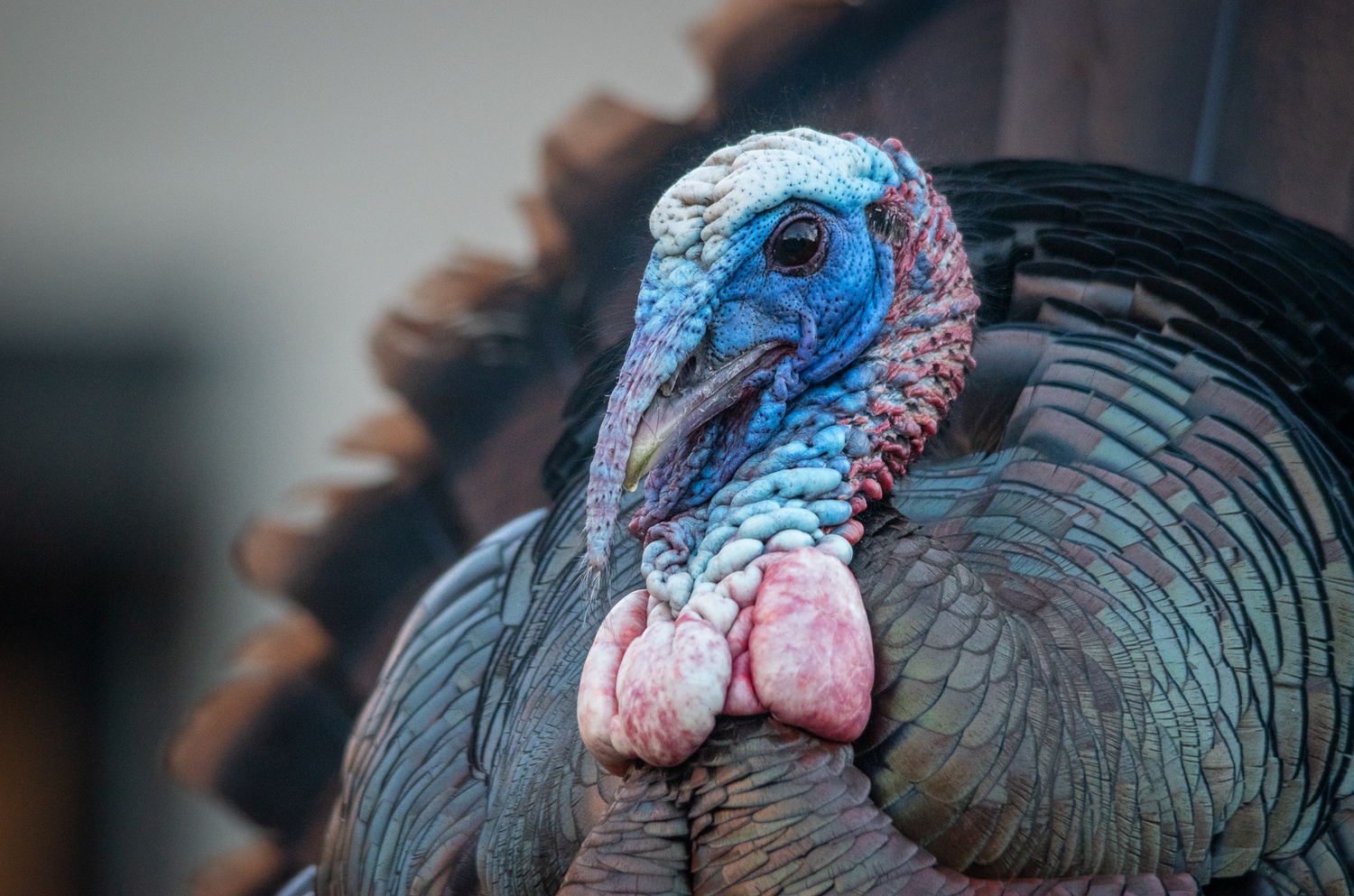 A turkey puffs its chest. - 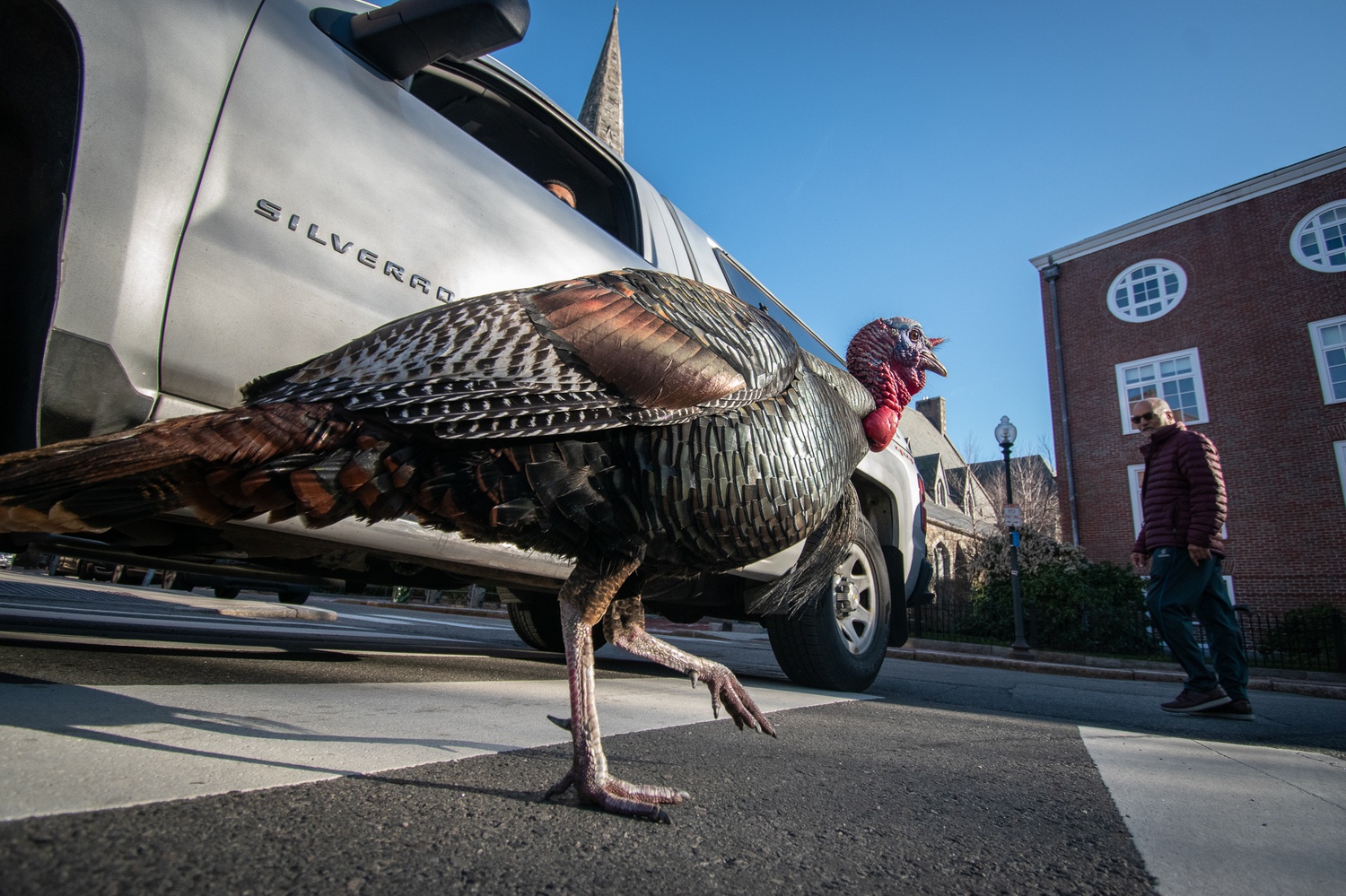 A turkey holds up traffic in the Square. - 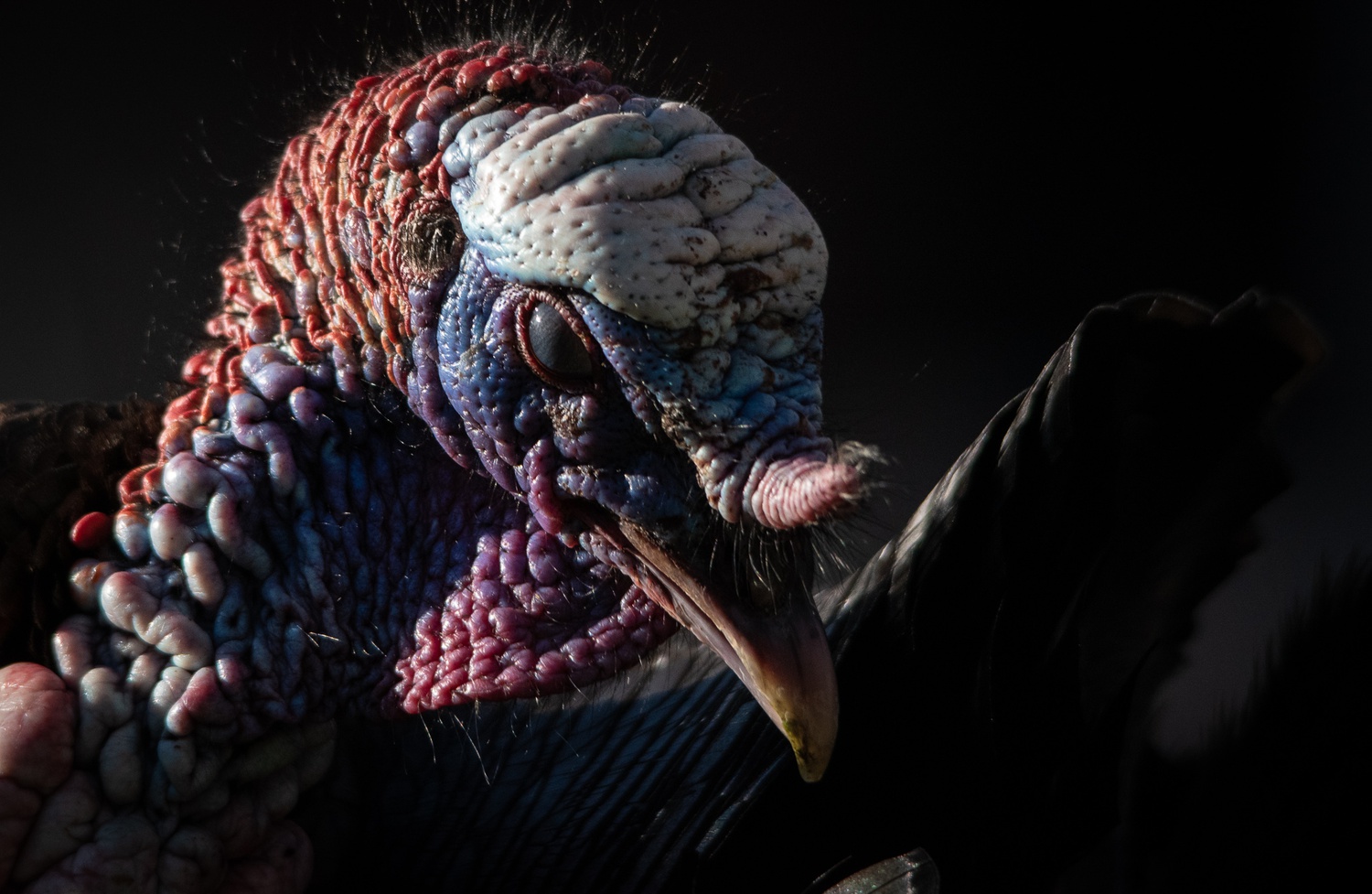 Closeup of a turkey - 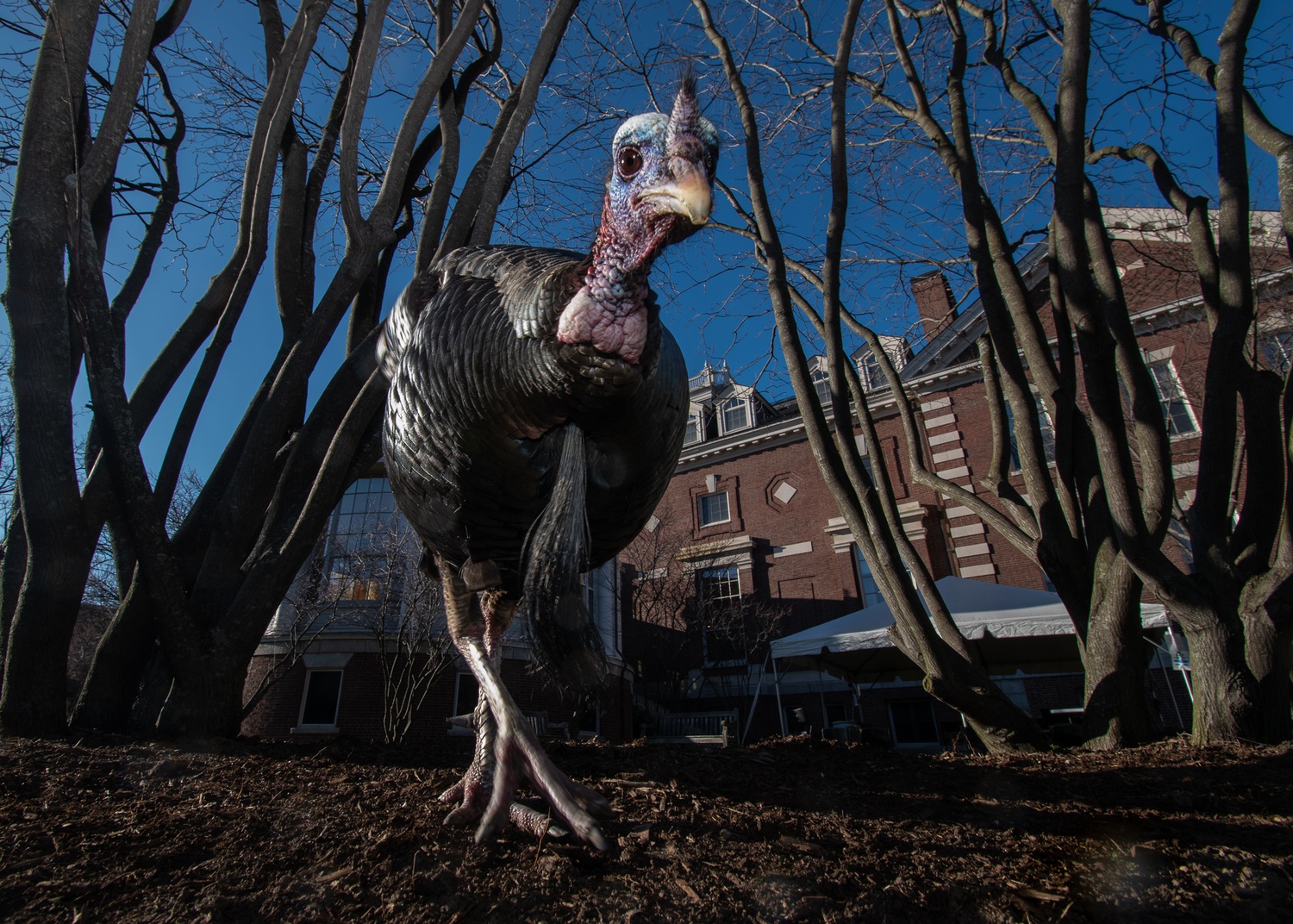 A turkey pecks at the camera in front of the Barker Center. -
By Ben Y. Cammarata

As with most city-dwellers, they unabashedly disregard basic traffic rules. According to a Thanksgiving-themed New York Times article about turkeys on college campuses, Harvard’s Environmental Public Health Officer Richard Pollack points out that “turkeys regularly held up traffic in the streets around campus and have been known to peck at the hubcaps of cars.”

Harvard’s turkeys have grown accustomed to the steady stream of people into and out of their home — comfortable enough to lay their eggs amidst a heavily trafficked college campus. During a month of brooding that begins around April, wild turkey hens look after about a dozen eggs. As spring advances, a number of poults will take their first steps (hopefully not into oncoming traffic).

After long days of jaywalking, the wild turkeys use their limited flight ability to reach the treetops, where they rest. Late-night strolls around the Yard reveal shadowy figures silhouetted among the branches.

In addition to the turkeys, squirrels, and geese that have made Harvard Yard their happy home, there’s a whole host of other species that one Harvard professor hopes will make a return.

Joyce E. Chaplin, a professor of Early American History, has taught a class called “Rewilding Harvard” for two years now. Its main goal? To return Harvard to precolonial biodiversity levels, one planter at a time.

“Where does Harvard come from? Where does it fit into a longer story of claiming land, often by taking it away from the traditional rightful inhabitants and owners, and developing that land of resources in more intense ways in line with capitalism?” Chaplin asks. “What is lost in those processes? What can be put back?”

Rewilding Harvard’s first planter in front of the Harvard Museum of Natural Science contained multiple native plants, including New England asters and showy goldenrods. This year, students will tackle a site at the Harvard Business School. 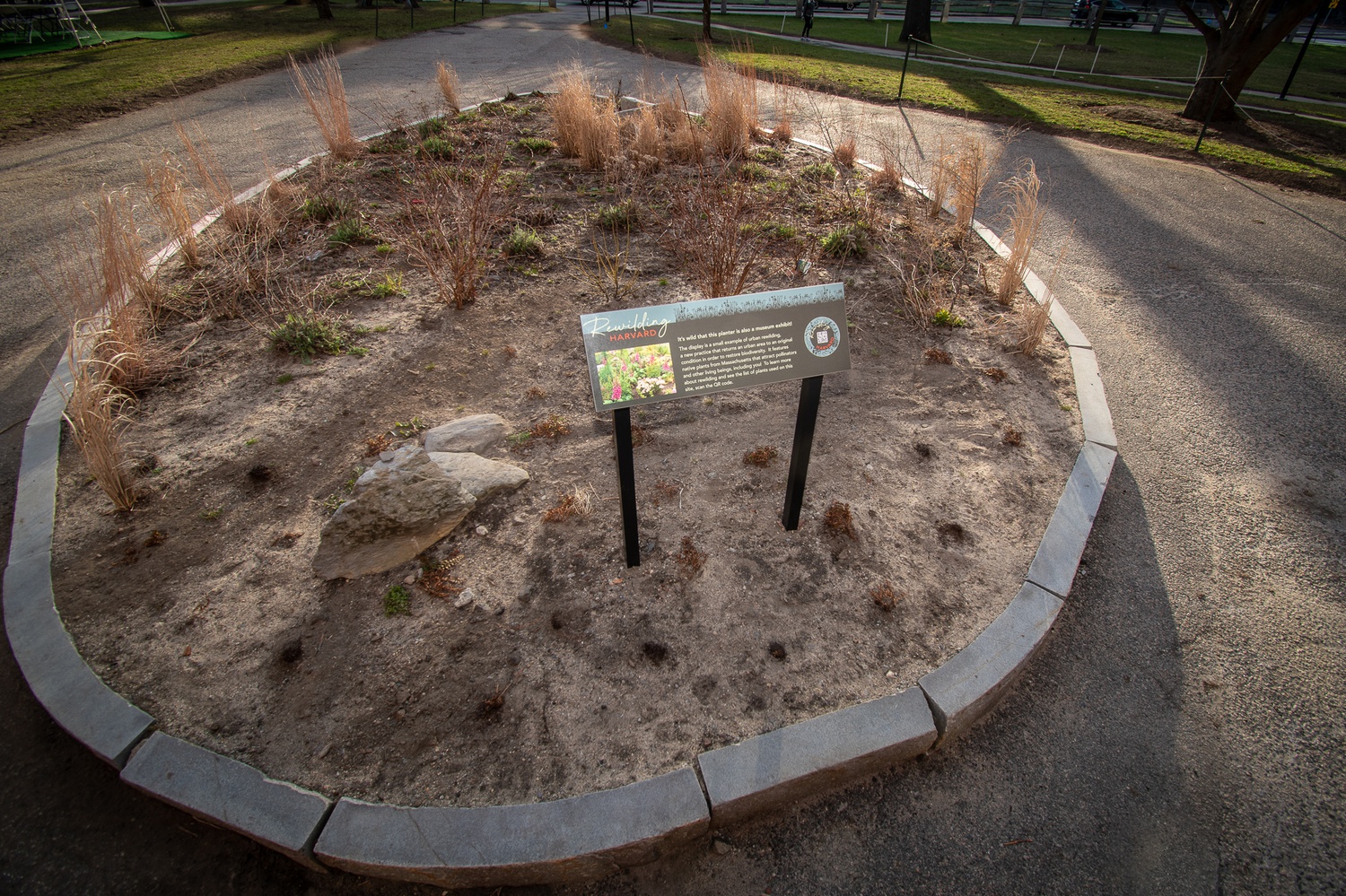 A planter with species native to New England, part of the "Rewilding Harvard" class project. By Ben Y. Cammarata

Meanwhile, students will continue to sashay out into the Yard to enjoy the springtime climate. As Chaplin reminds us, the Yard is a consciously designed space — parklike, but not a park. Indeed, its current plants and animals must be “able to exist in a curated, non-original environment,” she says.

But that won’t stop us from enjoying the Yard, the squirrels and the turkeys and the Canada geese notwithstanding. MacKay appreciates students “hearing nature” even through the 1 Bus’s incessant call for passengers to Nubian Station and the Red Line’s low rumble.

When the (in)famous lawn chairs come out, MacKay hopes that faculty, students, and visitors will sit in the Yard and take a breather. It’s worth sitting down “even for just a moment,” MacKay says, and “forget that you’re in the middle of the city.”