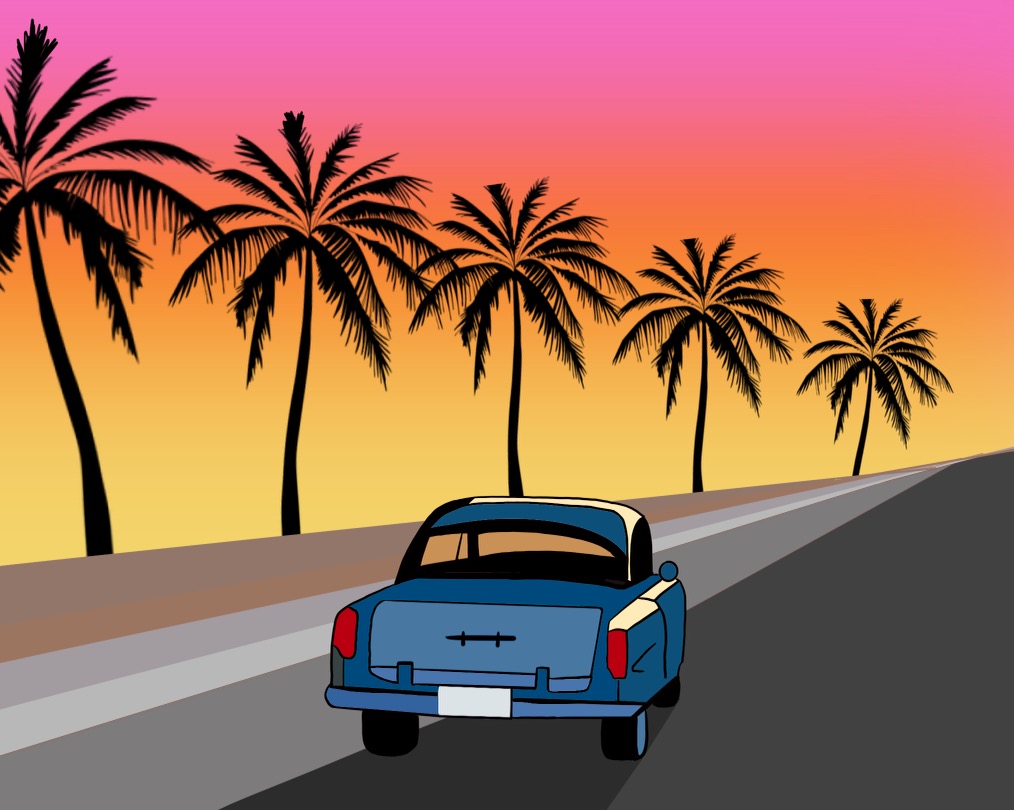 A Summer Soaked in Nostalgia

I always loved who I was in LA; the city seemed to mark clear periods of growth, the backdrop of the coming-of-age movie that I believed to structure my life. But this time around, endless days alone replaced collective effervescence.
By Elyse D. Pham

I was sitting in a hotel room at the Westin Pasadena when the reality of my upcoming summer sank in.

The setting was perfect for a revelation of impending loneliness; it had two beds and was way too big for just me and contained no signs of life besides my makeup strewn on the bathroom counter. The cousins I was living with sometimes got a free room with their Marriott points, just to use the hotel pool. They told me I might as well stay and enjoy the quiet. I couldn’t pass up the easy romanticism of a solo night in a nice hotel.

After they left, I logged onto my virtual internship, which ran from the disorienting hours of 3 p.m. to 11 p.m. three days a week. For the other two days, I worked in-person at an Asian American film production company — the gig that had landed me in LA for the summer. I imagined my best friends pregaming in New York, playing the Nicki remix of “Best I Ever Had” and rotating through endless outfit permutations. We’d all lived together for the past year, and I’d underestimated the buoyancy of knowing that hours alone would always be balanced by hours of booling. Now, I was stuck in a sterile hotel room in a sprawling city that contained very few reliable friends.

The next morning, I braved the 45-minute journey to Beverly Hills just to spend $13 on frozen Greek yogurt, navigating LA’s notorious highways even though I’d only gotten my driver’s license a month ago. My jitteriness demanded that I be on the move. I cruised along Mulholland Drive with an invigorating ease; I belted the Olivia Rodrigo album. I started to think that summer might be okay after all.

Then I promptly dented a parked car. When I asked my parents for advice, they misunderstood what happened and told me not to leave a note. I soon realized that I may have committed a hit-and-run. On the road back to Pasadena, I cried a dangerous amount for someone who clearly did not know how to drive.

When I’m on the Silver Lake portion of Sunset Boulevard at dusk, I feel like I’m walking through a photograph. Leaving the strip mall with the upscale sushi restaurant and Van Leeuwen’s ice cream, I know I’ll hit Intelligentsia Coffee if I keep going for 15 minutes. At the famous Sunset Junction, the photograph’s waffled, yellowing edges will come into focus, and I’ll have to turn back to keep soaking in sepia-toned nostalgia.

I’ve always been sentimental; places are easily inflected with visceral associations of what once happened there and haunted by the specter of who I was in those moments. The sentimentality can sometimes be selfish. LA is a city of nearly 4 million people; I’ve spent maybe half a year there. Still, that street and the hills and the reservoir feel arrested in my memory, like they only exist for me.

My nostalgia has been forged through a flurry of memories, but here’s the one I think it hinges on: the weekend before my high school graduation, I went to LA on my first-ever trip with friends. We met up with my debate friend from Silver Lake at the strip mall for sushi; I’d had a crush on him years ago, but being platonically close now made me feel chill and mature compared to my pining younger self. After dinner, streaks of pink and orange blossomed over the silhouetted buildings on Sunset — a classic LA postcard. I remember being intoxicated by independence and youth and this new person I could sense myself becoming. I was on the precipice of collegiate reinvention, and already I was the kind of girl who could jaunt around a cool city like LA. It was a feeling I knew I’d be chasing forever.

Since that trip, I kept returning to LA, and often to Silver Lake. I clocked nights of debauchery there — before a beach bonfire, on New Year’s Eve — when alcohol was still tinged with novelty. My roommates and I lived in an adjacent neighborhood for three months over our pandemic gap year.

Last summer, I returned because of my burgeoning interest in entertainment. I always loved who I was in LA; the city seemed to mark clear periods of growth, the backdrop of the coming-of-age movie that I believed to structure my life. But this time around, endless days alone replaced collective effervescence. My relationships to people there had changed, as they do; I was working instead of freely roaming.

If Silver Lake was a photograph, I was no longer the girl who took it. Still, returning to LA made me fixated on her, and on the places that had preserved the city so beautifully in her memory.

My cousin told me that I needed to make friends. He advised me to break into the “Asian scene” or join a girl squad at a pilates class. We both knew I never would. I was famously not a “chiller”; I wanted to be engulfed by relationships with people who deeply understood me. If I couldn’t have that, I would lean into the summer’s loneliness — which operates in a sneaky symbiosis with sentimentality. My job didn’t start till 3 p.m., so I often drove alone from Pasadena to the trendy Eastside cafes I used to frequent. Those excursions served as a time machine. I didn’t have to forge new meanings out of LA; I could just remember the old ones, and that was enough.

A month into my stay, my cousin summoned his niece and nephew from Orange County to hang out with me. Evidently, my routine was so untenable that it required intervention. Both were new to LA, and I was designated as their tour guide.

For brunch, we shared the Instagram-famous ricotta toast at a Sqirl, a quintessential Silver Lake cafe. We talked about Brian’s romantic situation and whether Kaitlyn should quit college swimming and my absurd creative project. We didn’t bare our souls to each other, but I was reminded of how refreshing it can be to approach people without context, purely as the selves that we are now.

Afterwards, we sat in the sun at Intelligentsia Coffee. Fleetingly, my mind wandered to when I’d sat in that same sunny spot a few weeks before, and the butterflies of hope and excitement that had since deteriorated. But then Kaitlyn took a picture of our lattes for her fledgling foodie Instagram account, and the sun and red stucco and matcha-on-tap zapped back into focus — out of the past and into the concretely vibrant present.

Two months later, I discovered a new level of porousness to the world, and I learned just how saturated the world could become in return. It was my last week in LA, and I had spontaneously given someone a handwritten letter — a letter that was, in retrospect, the most circuitous emotional confession ever written. Still, the vulnerability of putting thoughts on paper for another person to read startled me. I hadn’t done anything like it before, and I was surprised to learn that I could. When I pulled the haphazardly folded papers from my pocket, it was like handing over years worth of tenderness — the parts of my interiority that I never dreamt could be entrusted to the care of someone else. I immediately got into my Prius, turned on SZA, started crying, and drove off.

What was once a high-stakes obstacle course had transformed into well-worn terrain. As I drove from Silver Lake to Santa Monica, I understood that every cliché about opening yourself up to someone was true: I felt wonderfully, liberatingly naked. A constitutive element of nostalgia is that it’s always being created. So maybe, when I return to LA, the route along the I-10 will be inextricable from a euphoric emotional intensity. But in that moment, it felt so vivid that it had to be singular. I couldn’t imagine feeling this specific way again. I didn’t want to. The idea that the drive could fade into another source of nostalgia — something to be inorganically recreated — seemed far-fetched and silly.

Traffic clogged the I-10, and I wondered what I looked like to the people in the cars around me. My eyes were red and puffy. Snot ran down my lips. I wasn’t crying because of what the letter actually said, or what response I might not receive, but because I was overwhelmed by the sheer power of what I had the capacity to feel. I laughed then, in the middle of a vast, crowded highway, amongst so many strangers who had maybe once felt this inarticulable mess of feelings, too.

— Magazine writer Elyse D. Pham can be reached at elyse.pham@thecrimson.com.