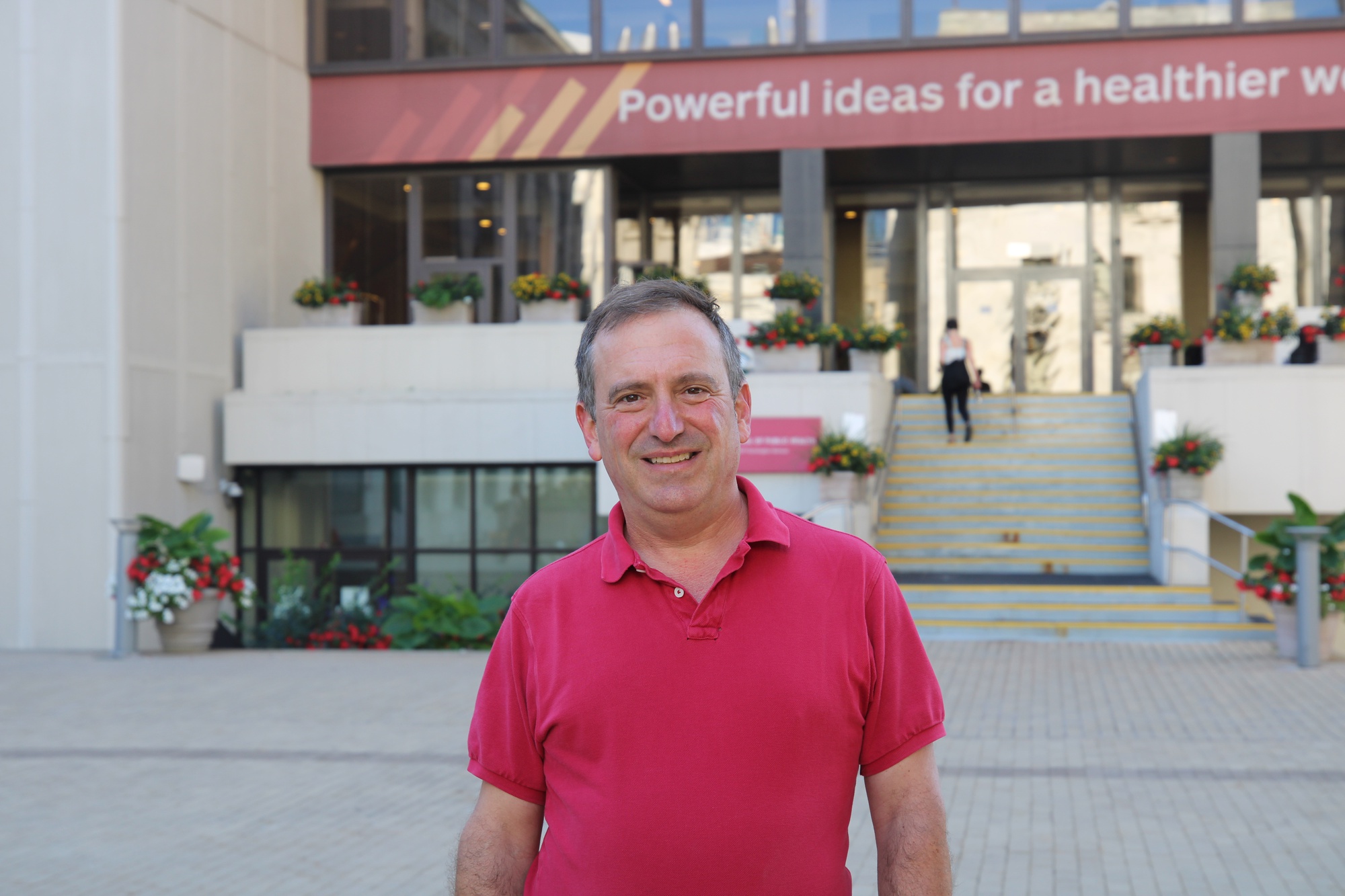 "Being very clear about the scientific rationale for advice, what are the limitations of what we know, and what public health authorities are doing to understand the things they need to know to make better advice — all these go a long way."
By Dina R. Zeldin

Marc Lipsitch received an undergraduate degree in philosophy from Yale and a DPhil in zoology from Oxford. He is a professor of epidemiology at the Chan School of Public Health and director of the Center for Communicable Disease Dynamics. He also serves as the director of science at the Center of Disease Control’s Center for Forecasting and Outbreak Analytics.

This interview has been edited for clarity.

FM: How and when did you decide to become an epidemiologist?

ML: It was a gradual process. I went to graduate school thinking I would do some kind of quantitative biology and got very interested in the evolutionary biology of pathogens because I had an interesting group of people studying math to work with. Over time, I got frustrated with the inability to test the quantitative models that we were making of how pathogens would evolve. They could sort of predict anything, and you couldn’t constrain them very well with data. I started looking for ways to use an approach where you knew whether you were right or not. I got interested in evolution of bacteria and antibiotic resistance, and then — on a lark — applied for jobs in epidemiology departments.

ML: I was at a meeting in Washington, and there were a number of coronavirus experts at that meeting. It was January 22 or 23 of 2020, and they were certainly all talking about it. It had been in the back of my head. Then, as the information from Wuhan began to come out that [Covid infections were] filling up their intensive care units, and it was not just a small outbreak but a much larger thing, I began to pay more attention. By mid-February, I was saying publicly that this was going to be a large event.

FM: What was it like for your work to suddenly be in the spotlight of public attention and government decision-making?

ML: The president had chosen not to make a serious response to this pandemic as it was developing. So I, along with other faculty members and researchers at CCDD, made a conscious decision that one of our roles was going to be to get good information out publicly in the absence of a high functioning government response. So the attention was very welcome. I co-wrote an article in a Scientific American blog about how journalists should cover an event like this and how to distinguish fact from opinion from speculation. It then became very intense: there was one day when I got calls or emails from five different CNN programs asking if I would come on. That’s not something I’ve ever experienced.

FM: You’re the director of the Center for Communicable Disease Dynamics — what does it mean for a disease to be dynamical?

ML: When a disease is communicable, meaning it moves from person to person, that means that it can grow very rapidly. It can be exponential growth. Diseases that are communicable can go from being a non-problem to being a global problem in a very short time. One of the features of our field as opposed to chronic disease epidemiology is that in chronic diseases, you can study problems and figure them out at a normal scientific pace. With communicable diseases, the problem of decision-making under uncertainty is almost always present. At the beginning, you don’t know what the trajectory is going to be, so you plan for a range of scenarios. My new CDC role is to try to help decision-makers understand which range of scenarios is most important to plan for.

FM: What’s a common misconception about Covid or viruses in general that you wish you could dispel?

ML: One of the common misconceptions that’s been problematic is the idea that viruses can either go away or become milder and have a natural tendency to do so. I was asked by the leader of a country who called me up one day — that was another thing that doesn’t happen to me normally — and he said, “I’ve been told that it’s like a toner cartridge, that it runs out of ink eventually.” I said, “Well, there’s no analogy there. Viruses are not toner cartridges. DNA replicates and RNA replicates. It’s just different.”

FM: A lot of your previous research focused on antibiotic resistance. Can you tell me a little bit more why you found this area compelling?

ML: I found it compelling because it’s one of the clear applications of evolutionary thinking to public health. It was a way to constrain my models. But it also is a major global health problem, one where the efforts to control it have been haphazard. Everyone understands that the less you use antibiotics, the better — until the point where you start harming patients. But beyond that, there’s a lack of clarity about what kinds of use matter for what outcomes and how to control the problem.

FM: Your undergraduate degree is in philosophy. How does your academic background influence how you approach epidemiology and your work now?

ML: In the early days, I thought that mathematical modeling was a little like philosophy. It was a lot of abstract thought with reference to the world but was not exactly scientifically testable. More and more, I’ve been moving into areas where testing those models is an essential part, so I don’t think that anymore. But the ability to think abstractly and then bring that to particular cases is something that I learned in that study. In recent years, I’ve developed a strong interest in research ethics.

FM: You mentioned earlier the importance of making information that you’re working on available to the public. A White House policy declared in August that by 2026, all federally funded research will need to be freely available. What are your thoughts on this policy, and how will ending paywalls to scientific journals impact epidemiology?

ML: I’ve been arguing for open-access and favoring open-access journals for my own work — not exclusively, but a lot. I’ve been working as an editor and reviewer on open-access journals. That’s the wave of the future. It’s outrageous that publicly funded research is paywalled. Most journals add almost no value to the papers they publish. “Epidemiology,” one of the major journals in our field, really edits it carefully and improves the paper beyond the peer review. But there are other ways to pay for that. It’s long overdue.

FM: Public health messaging has been a huge point of issue in dealing with Covid, but also many other problems like vaccination and monkeypox. How can we change the way we discuss public health issues to reduce political polarization?

ML: Being very clear about the scientific rationale for advice, what are the limitations of what we know, and what public health authorities are doing to understand the things they need to know to make better advice — all these go a long way. One of the initiatives that our group at the CDC Center for Forecasting and Outbreak Analytics has undertaken is to publish what we’re calling technical reports, following the practice from the UK. The report is the latest understanding of an evolving situation. It’s published on a fairly rapid time schedule, it highlights areas of uncertainty, and it provides a lot of data in a downloadable form for other people to use. It’s still a work in progress, but I think that spirit is a really good one. It won’t solve polarization for sure, but it will allow people to have those reasoned discussions with a common set of facts.

FM: What would you say was the biggest public health success of the 20th century?

ML: Vaccination. For sure.

FM: Are there areas of research we should be paying attention to that may bring the biggest public health success of the 21st century?

ML: Because vaccination has been so successful, the remaining major infectious problems are ones for which we don’t have good vaccines — HIV, tuberculosis, and malaria being prominent. In a way, we’ve grabbed the low-hanging fruit of vaccination. And now as technology is evolving, we’re beginning to grip the middle-hanging fruit. The other thing that’s very clear is the inequities at every level, from within a city to within the world, in who has access to health care. Within the U.S., that’s part of a much larger problem of inequities. We all pay our taxes to get the research and, to some extent, to get health care. But what’s available is very unevenly distributed.

FM: Who is one role model that you have?

ML: Perhaps the best answer would be my PhD advisor, Robert May, who died a few years ago. He was an Australian physicist. He always said exactly what he thought and tried to get things done rather than promote himself. I admired his frankness and his ability to back it up with knowing what he was talking about. He was a little brusque — I try not to do that part.

FM: Your academic background and your professional interests are very interdisciplinary: philosophy and biology, and now you’ve incorporated math. Why is such a multifaceted approach successful?

ML: My experience the last couple of years over the pandemic has really convinced me that that not only do I find it personally fun to move back and forth between approaches, but I think it’s really important for public health professionals in the coming years to be comfortable with that, because you get more out of it that way.

FM: In your Twitter profile, you label yourself as an aspiring barista. Tell me more about this dream and how you’ve been making progress towards it.

ML: Team whatever I can get. I don’t even remember what I got most recently, a couple of days ago.