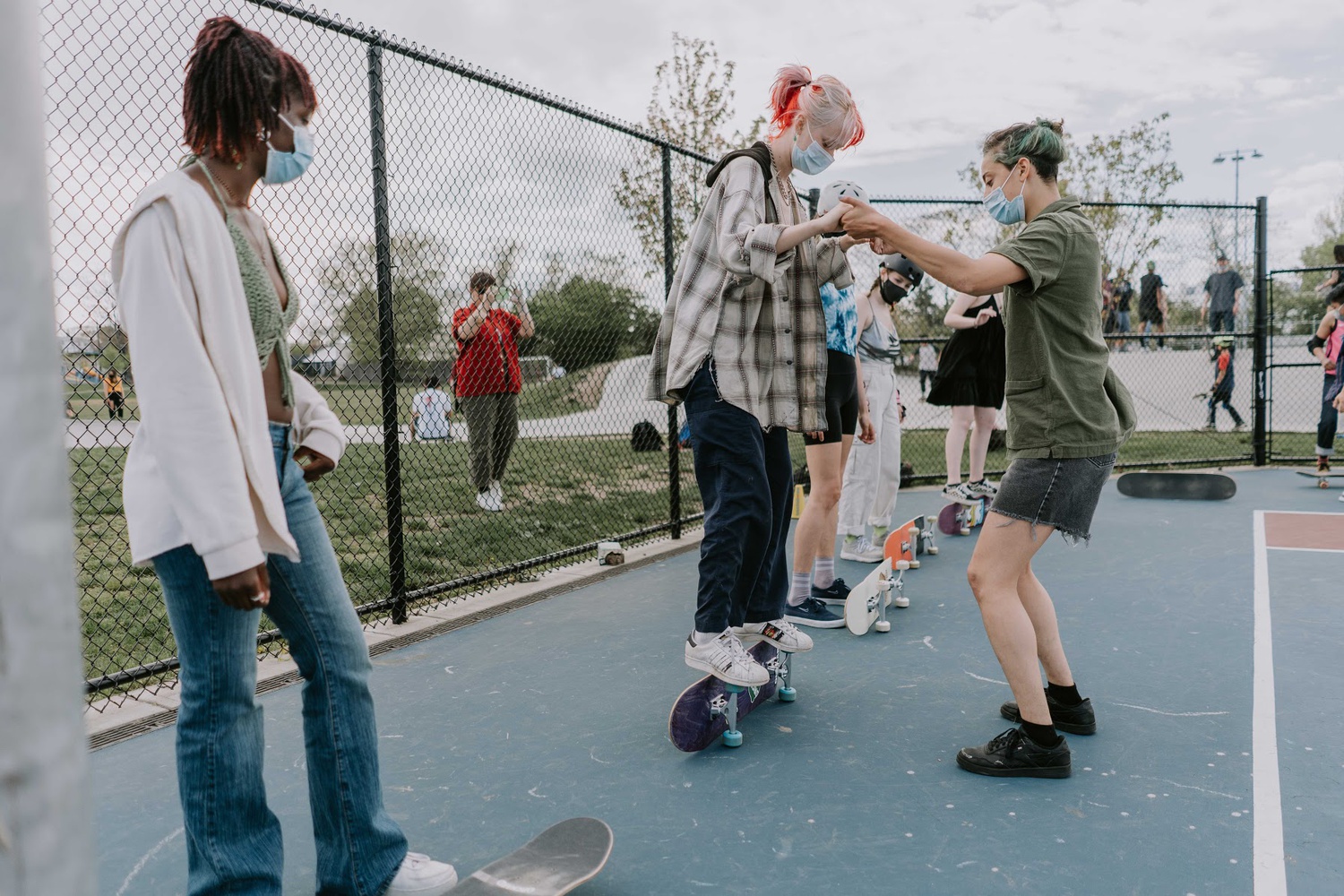 Their goals are to meet everyone where they are, helping those new to the community get comfortable with skate culture without having to dive in head-first and to build connections across creative spaces.
By Mila G. Barry

On a typical Monday summer evening at the Smith Playground in Allston, creatively costumed skaters from around Boston descend on the street hockey rink. They are there to build skate skills and community as part of a larger Boston-based movement to create affirming spaces for people of all skill levels to get on wheels.

Lonely Bones Skate Co. and Skate Hags, both founded in 2020, are two skate groups working to combat white, cisgender, and male media stereotypes to make it clear that everyone belongs in the sport.

Lonely Bones, Boston’s first queer- and BIPOC-led skate collective, was founded by Claire I. Lee and her friend Rayven D. Tate, who were both inspired by the women-led collectives of the vibrant West coast skateboarding scene.

“I noticed that there were some gaps that I felt like weren’t fulfilled,” Lee says. “I think queer people, trans, gender non-conforming people, and people that don’t necessarily identify as women aren’t really seen in skate media or feel comfortable at skate parks. I think there was a big gap there in not only representation but in leadership.”

This sentiment seems to have resonated in Boston and beyond. About 80 people from the New England area showed up to the collective’s first event.

“We were so ill-prepared because I was like, ‘Oh, ten people are gonna show up,’” recalls Lee, “and from there it just really went fast.”

Just two years later, Lonely Bones events now draw up to 200 attendees. During the skate season — whenever there’s no ice and snow on the ground — they host at least two scheduled events per month, one “standard skate” meetup and another that incorporates other art forms, such as fashion and music. Their goals are to meet everyone where they are, helping those new to the community get comfortable with skate culture without having to dive in head-first and to build connections across creative spaces. 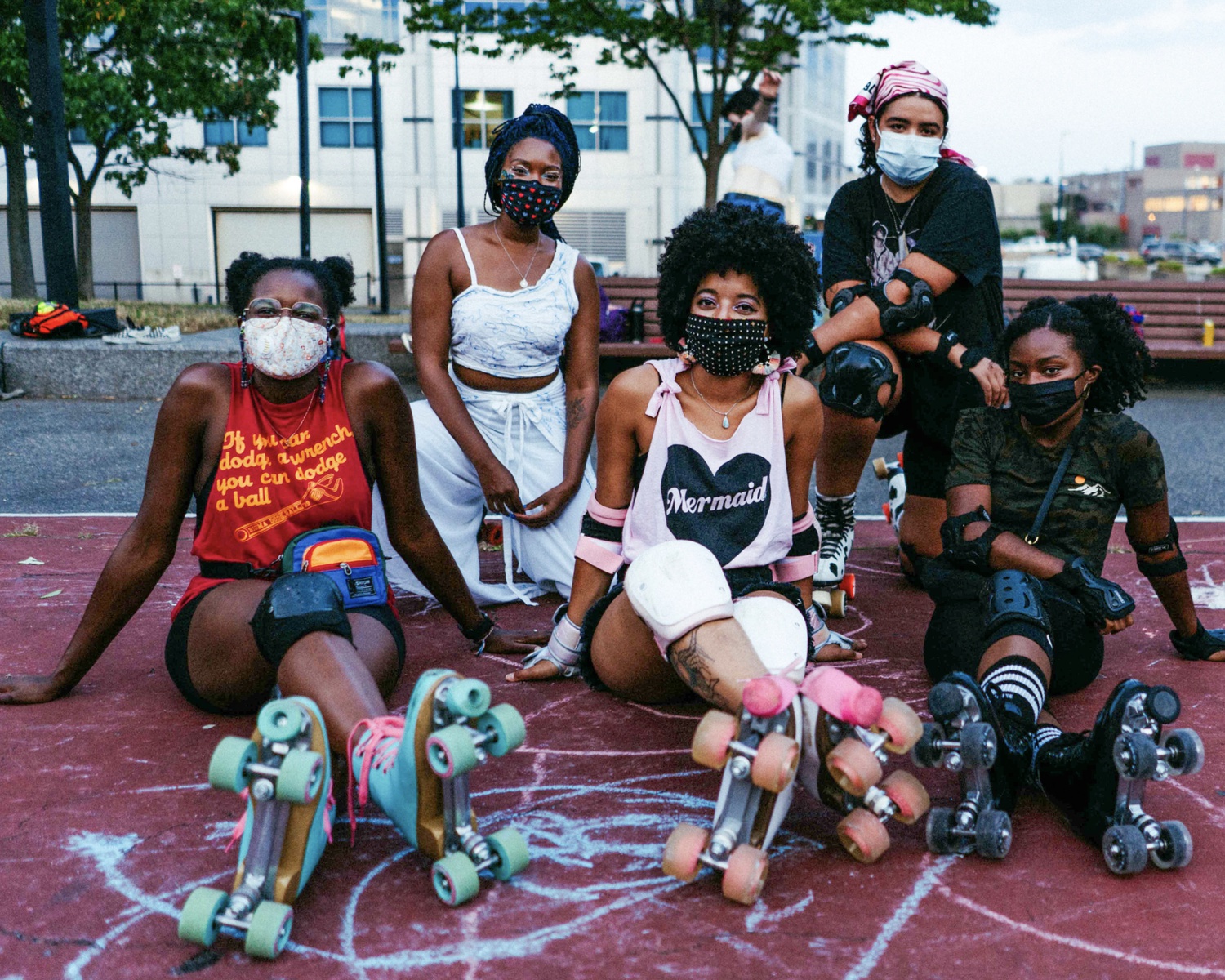 Lonely Bones aims to help people of all skill levels and identities feel comfortable at skate parks. By Courtesy of Claire Lee

Lonely Bones’s commitment to inclusion extends beyond the skate rink. They’ve facilitated fundraisers for organizations like Black and Pink Massachusetts, which advocates for prison abolition and LGBTQIA2S+ liberation, and Trans Resistance MA, which uplifts the “joy, safety, and liberation of QTBIPOC.”

“There’s a lot of beautiful things that can come from skaters interacting more with adjacent communities and artists and musicians, because there’s a lot of overlap there.” Lee says. “Sometimes I think of skateboarding as more than just skateboarding and almost like an art form and a vessel for self expression.”

Initially just a trio of avid roller skaters looking for a place to practice, the group started small and put out an open invitation for locals to join them in a church parking lot in Waltham. It was there that they chose their name, reclaiming a historically insulting term.

“The term ‘skate hag’ is a slur that used to be used against women who would like to hang out at skate parks,” says Millis. “It suggested that they weren’t there to be cool and skate, they were there to try to get dudes. That was very funny to us and not ever what we were trying to do.”

Skate Hags has since expanded to host themed Monday-night skate sessions at Smith Playground with themes like pajamas and fruit. When the weather gets cold they move to The Edge, an indoor skate park in Taunton.

“The idea is just to have fun. If you want to dress to the theme, please be very creative,” Millis says. “The vibe is like silly cute goobers, just like how we started.” 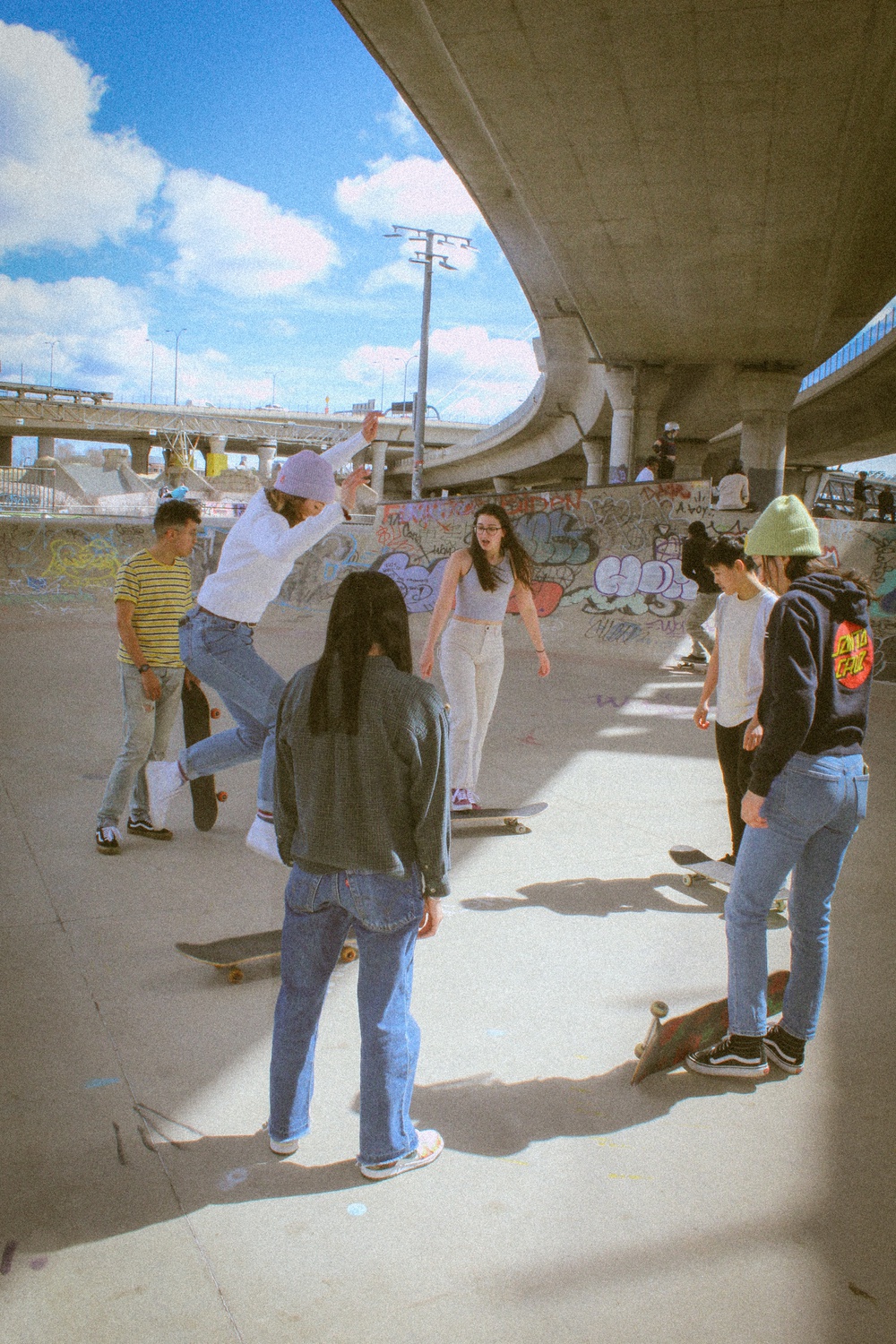 "We’re very intentionally carving out this space for ourselves," Lee says. By Courtesy of Claire Lee

“[The Boston skate scene] is definitely emerging a little bit more,” Lee agrees. “We keep showing up at skate parks and making it very clear to the people who feel like they dominate that space that we’re not going away and that we’re very intentionally carving out this space for ourselves.”