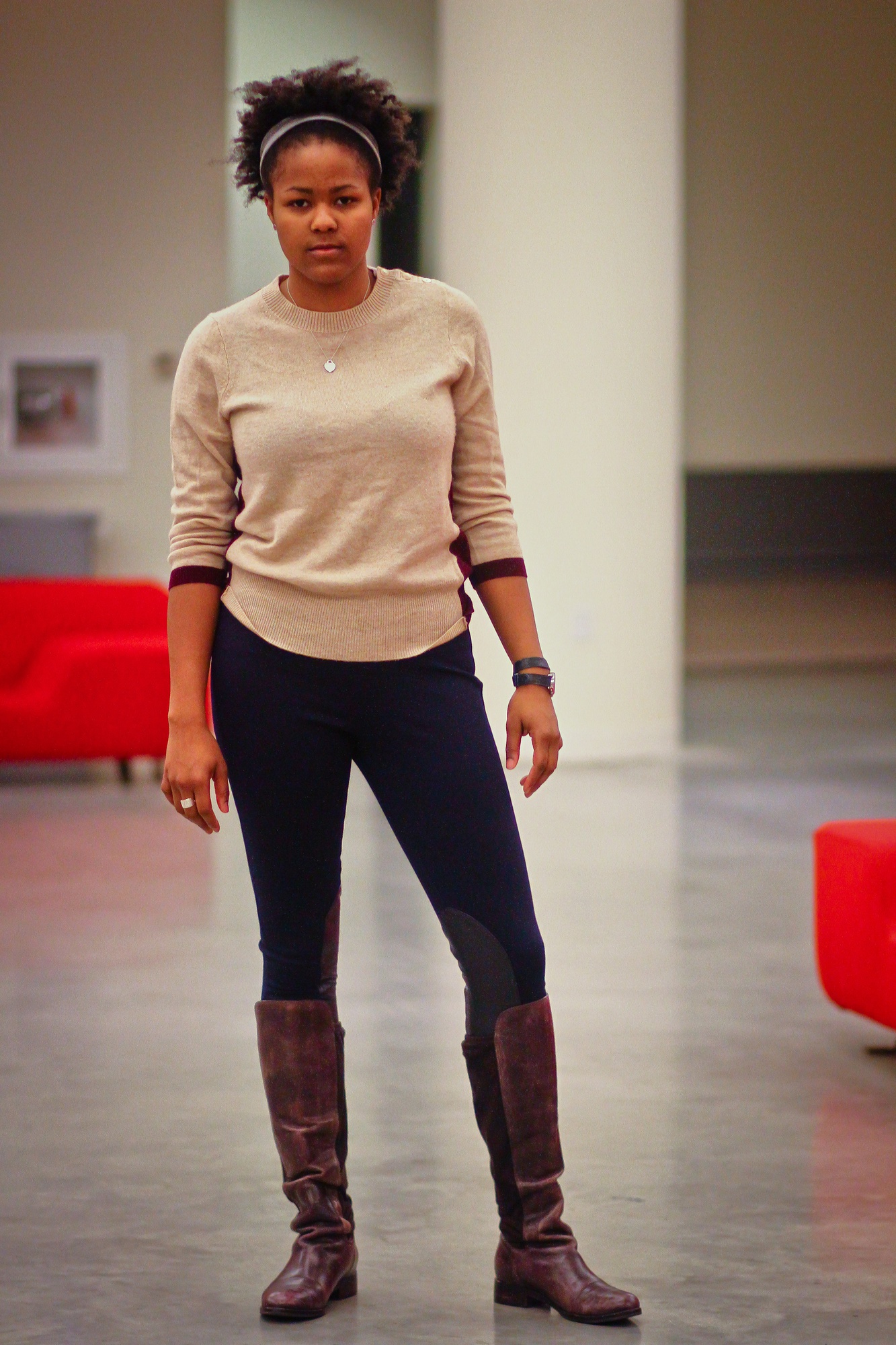 “This is so awkward. Like what? I love cats? What do you want me to tell you?” Erin D. Drake lounges outside Quincy Grille, her legs tucked up into the space next to her on her bench.
By Andrew A. White

“This is so awkward. Like what? I love cats? What do you want me to tell you?” Erin D. Drake lounges outside Quincy Grille, her legs tucked up into the space next to her on her bench. She’s unsure why she’s been selected as one of the seniors to meet this year, but as she details her deep commitments to her chosen communities, it becomes clear that few students have had as much of an impact on those around her as Drake has.

Drake, a history and literature concentrator from Nashville, Tenn., started her Harvard experience with the First-Year Urban Program, where she was attracted to the openness and challenge the program presented. “It’s the conversations where you’re talking about people’s theories of change, which isn’t easy,” she explains. “It’s not supposed to be easy. Often times, it’s not supposed to be comfortable either. I found that very much in [the FUP] community, I felt challenged, and I liked that.” She pauses, adding, “And I also found some hilarious people. I love people.”

Indeed, Drake loves people in a truly genuine way. Her freshman year, she signed up for an Alternative Spring Break (ASB) trip to New Orleans through PBHA. “With FUP, you have a week with these [freshmen]. With the ASB trip, you had a week. And I thought, that’s not it. It’s not necessarily about that week. It’s about what happens before that week and it’s about what happens after that week.”

True to this vision, Drake has since served as a directorfor the ASB program, been on the FUP leader Steering Committee, and was elected as the Student Development Chair within PBHA. She has been an active participant inthe Harvard Public Service Network, City Step, The Athena Program, and the Summer Urban Program as well.

Drake has shown her signature care in the black community at Harvard as well. She was a Freshman Representative and the Publications Chair for the Association of Black Harvard Women. Her sophomore year she joined Delta Sigma Theta Sorority Incorporated, a Cambridge-wide historically black sorority “steeped in public service, and also steeped in cultural relevance.” She became president of the chapter her junior year. She has spoken at the Class of 2017 Convocation, was part of the 1000 point club for high school basketball, won the Barrett Wendell Prize for a paper she wrote her sophomore year, and is one of the 2014 Class Marshalls.

But none of these accomplishments means as much to Drake as her relationships with others. “That’s why I do what I do. It’s because the experience matters to me. The process,” she says, “it’s not about the result.” Drake knows exactly what’s important to her: “To see a person enjoying what they’re doing, and really grasping the moment that they have,” she says. “We’re all between the ages of 17 and 24, and for whatever reason, we’ve ended up here, with each other. And we’re all figuring it out: who we want to be, how we want to treat others, how we want to love others, how we want to learn, what kind of contributions we want to make to society.” Drake explains that her experiences at Harvard have not necessarily provided clear answers to her questions, but have complicated her original views.

“That’s fun for me,” she says. “It’s in all these things, tangible and not, that force you to ask yourself questions about yourself, and how aware you are of the people around you, and where you put yourself. How aware do you think others are of you?” Well, it’s fair to say that she’s made herself known, even if she’ll never admit it.