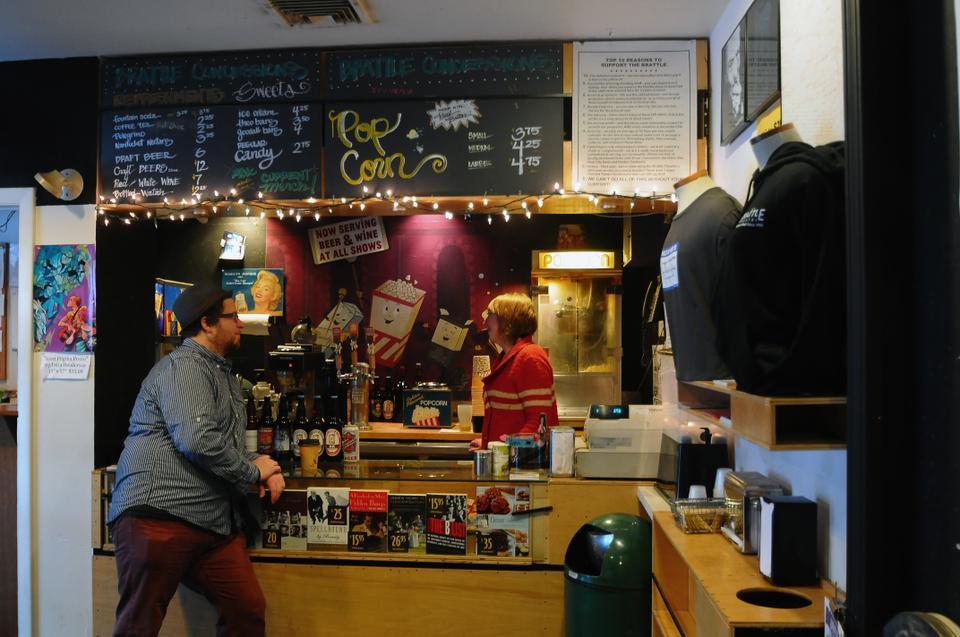 Past Tense: The Brattle Theatre

But this unassuming countenance does little to suggest the small, single-screen movie house’s long influential history. In the 60 years since its opening, the Brattle has helped to transform local film culture, and its influence has extended across the country.
By Rebecca J. Mazur

The Brattle Theatre’s dark red awning hangs low on the side of the building that more prominently houses Algiers Coffee House. But this unassuming countenance does little to suggest the small, single-screen movie house’s long influential history. In the 60 years since its opening, the Brattle has helped to transform local film culture, and its influence has extended across the country. Despite ever-increasing competition from multiplex cinemas and the internet, the Brattle, offering everything from recent Hollywood hits to independent foreign documentaries, remains Harvard Square’s only movie theater and one of its most beloved cultural institutions.

In its early years, founders Cyrus I. Harvey ’47 and Bryant N. Halliday ’49 used the theater to promote slightly obscure and underappreciated films to contemporary audiences. At a time when even big Hollywood releases would, after their initial run, be put into storage and forgotten about, the Brattle pioneered the idea of revival cinema. “It helped to launch this idea of ‘let’s bring movies back.’ It introduced these old films to a whole new generation,” says Marianne Lampke, who ran the theater along with Connie White from 1986 until 2001.

Starting in the mid-’50s, the Brattle began a yearly tradition of holding a Humphrey Bogart film festival right before the Harvard exam period. Undergraduates would flock to the headline screening of “Casablanca” as a welcome respite from studying. “We still hear stories about it now: The sound went out during a screening but everybody just kept saying the lines anyway, people have proposed to each other in the balcony during “Casablanca,” people used to come dressed up. It was the original ‘Rocky Horror Picture Show,’” says Ned Hinkle, the Brattle’s creative director. Harvard’s “Bogie Cult” sparked similar Bogart sensations at other colleges around the nation.

Harvey, who discovered the works of many international directors at the Cinematheque while studying at the Sorbonne in Paris, also wanted to expose American audiences to foreign films. At the Brattle, they screened works of filmmakers from around the world who were relatively obscure in America at the time, though some of their names—Bergman, Fellini, Antonioni, and Kurosawa—are widely recognized today. They also founded a distribution company, Janus Films, to distribute foreign films nationwide. “There were a lot of little independent art house theaters in Cambridge at the time, and they all had their little niche. The Brattle’s niche was that they played these great international films,” Hinkle says. Though Janus Films eventually closed when major Hollywood distributors began to take interest in foreign films, foreign films still constitute a large part of the Brattle’s programming.

In the mid ’70s, Harvey and Halliday sold the theater, which changed hands multiple times over the next decade. Susan and J.D. Pollack ran the theater in the early ’80s, maintaining the repertory and revival programming philosophy, but jazzing it up with a concession stand and a new balcony. Lampke and White, who both worked at the theater under the Pollacks, took over in 1986. They instituted a strategy they called “vertical programing,” in which they ran a different series each day of the week. “One of the things that we did forever was film noir Mondays. Tuesdays for a while we were doing independent cinema and showing emerging filmmakers. Wednesdays we had a series for a long time called Recent Raves,” said Lampke. “We were trying to keep it rotating so that each night of the week new audiences would come.”

The Recent Raves series continued Harvey and Halliday’s desire to give audiences another chance to see films that had already been retired from first-run theaters. After the Kendall Square Theater opened, however, which kept first-run movies running for longer periods than the Brattle, the market for second-run films at the Brattle declined. Lampke and White also continued their predecessors’ practice of seeking out contemporary foreign films not yet widely screened in the U.S., such as Japanese anime films and Jackie Chan’s Hong Kong action flicks. “Those films were really drawing a student audience,” said Lampke.

Hinkle and Ivy Moylan, former employees of Lampke and White, have run the Brattle since 2001. Though movie theater attendance has been dropping everywhere since the mid ’90s, in the past couple of years their attendance numbers have defied the national trend and actually increased by a small percentage.

Hinkle and Moylan are also working towards major technological changes—they’ve started a kickstarter campaign to raise money for a new digital projection and a new air conditioning system. The Brattle used to emphasize the advantage of seeing a movie on film stock, but now, as many major releases are not even released on celluloid, they want an upgrade so as not to limit their programming. “We’ll continue to play old movies and we’ll continue to play movies on film, but we have to be able to play everything,” said Hinkle.

For Hinkle, going to a theater at all is an undervalued experience. “I think there are movies that are being done a disservice by people who only watch them at home because when you see something with a crowd, even if there are only 10 other people in the theater, you have this indefinable experience where your reaction is bouncing off of other people’s and vice versa,” said Hinkle. “A funny movie is funnier, a scary movie is scarier.”