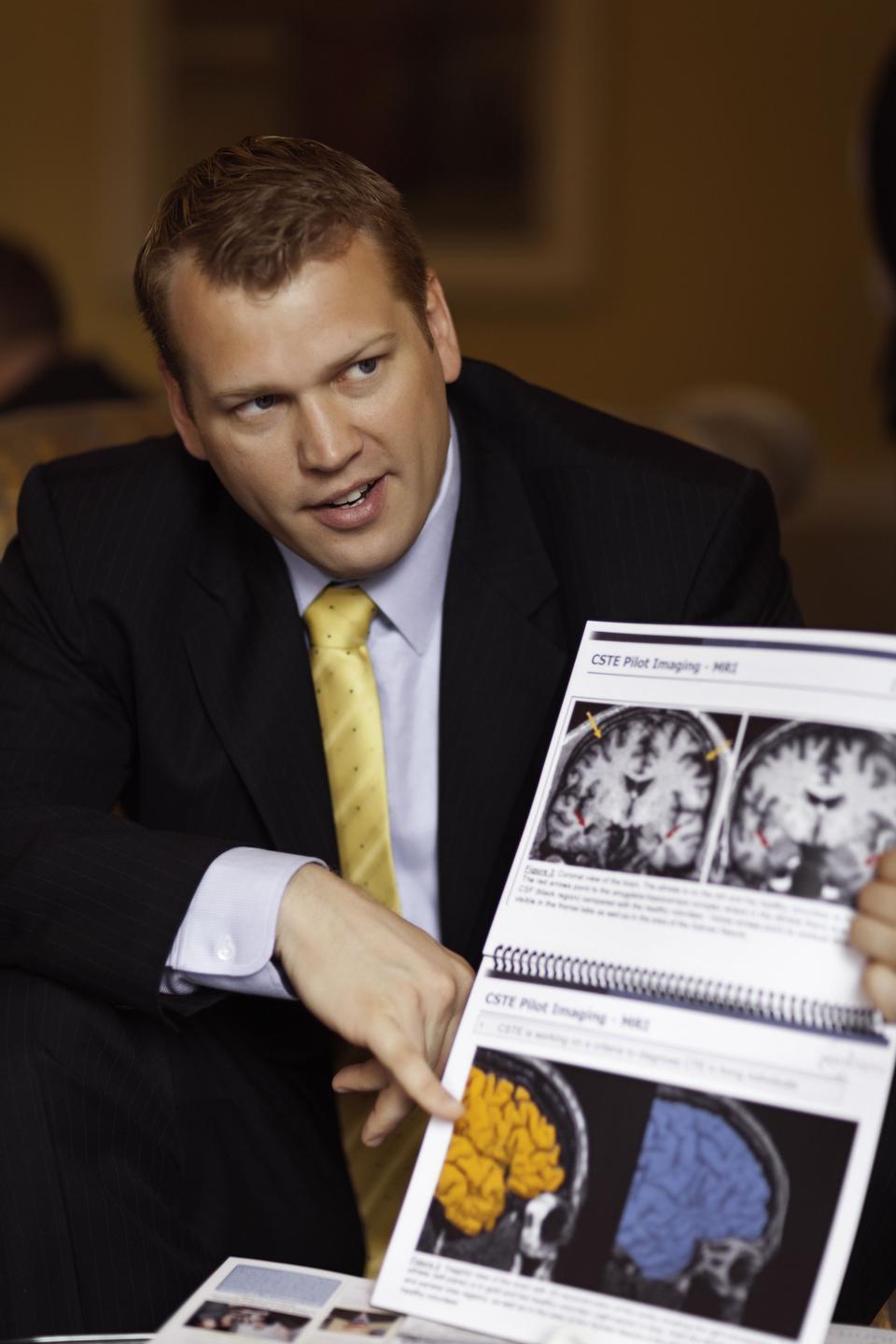 Concussed: Down and Out

Chris J. Nowinski ’00 was never supposed to be on the sidelines. As a Crimson linebacker and later a WWE wrestler, Nowinski threw mind and body into his opponents to send them to the ground. Now, 10 years later, his life is dedicated to protecting players from the sports he loved.
By David Freed and Keyon Vafa

Chris J. Nowinski ’00 was never supposed to be on the sidelines. As a Crimson linebacker and later a WWE wrestler, Nowinski threw mind and body into his opponents to send them to the ground. Now, 10 years later, his life is dedicated to protecting players from the sports he loved.

During Nowinski’s time as a student and football player at Harvard, the dangers of concussions remained undiscussed. “It never really came up at Harvard, and I never thought about it,” he said. “One of my old teammates got a concussion during a workout by falling off of a box and I was thinking, ‘What’s wrong with the guy? He’s so soft.’”

Nowinski quit pro sports in 2004 after suffering a traumatic blow to the head during a WWE fight. Now, together with Robert C. Cantu, a leading neurosurgeon and concussions expert, Nowinski has taken on what he calls an increasingly violent athletic landscape. They question a sporting culture in which children start playing tackle football in elementary school—sometimes with devestating consequences.

Cantu recalls one child who participated in Pop Warner, the country’s largest youth football organization, and experienced early brain trauma because he was not given proper medical rest after suffering a concussion.

“[The child’s father] let his son go back and play,” Cantu said. “In a practice before the game, he took a shock to the head and he lost for over four months the names of all of his classmates, 90 percent of his vocabulary, and his ability to do math. This happened in August, and he was virtually out of school through the fall and part-time in the spring. It was [only] in June when a light switch went on and names and language came back to him.”

In the nine years since meeting one another, Nowinski and Cantu have set out to redefine the way sports—both professional and amateur—consider player safety.

When Nowinski and Cantu founded the Sports Legacy Institute in 2007, their mission was twofold: Not only were they responsible for researching brain trauma and prevention, but they also had to persuade an unconvinced American population that concussions are indeed a severe problem.

Additionally, Nowinski and Cantu serve as co-directors at the Center for the Study of Traumatic Encephalopathy, a joint venture between the SLI and the Boston University School of Medicine.

“Just a few years ago, folks didn’t even think of concussions as a serious issue,” said Christine M. Baugh ’10, a research coordinator for the CSTE. “The NFL didn’t believe it was a long-term issue.”

At the Sports Legacy Institute, Nowinski and Cantu received brain donations from athletes in contact sports who had died unexpectedly. They tested each brain for a neurological disease known as Chronic Traumatic Encephalopathy, a type of dementia whose symptoms bear a strong resemblance to Alzheimer’s. The unique risk of CTE is that it can manifest itself at any age as a result of brain trauma caused by repeated blows to the head sustained decades earlier.

The results of the tests were staggering: Of the first 85 brains they received, 60 tested positive for CTE. This breakdown included 34 of the 35 football players who had donated their brains for the study. With Nowinski’s connections to the football world and Cantu’s medical background, the SLI team was able to unearth frightening data about sports trauma.

“Back then, Chris made those very difficult phone calls,” Cantu said. “Without the knowledge and the charisma that Chris had, this center would not have had any chance to take off the way it did.”

Some may find it surprising that it took researchers so long to connect head trauma in sports to CTE. Nowinski suggested the connection bears a strong resemblance to a similar crisis fifty years earlier.

“With CTE, by the time the symptoms appear it may be twenty years away from the last time you wore a helmet,” Nowinski said. “It’s the same problem that we had with lung cancer and smoking. If it doesn’t happen for thirty years and you stop smoking, it’s harder for people to consider it the cause of the illness.”

As concussion research has flourished, the SLI and CSTE teams have seen their work affect public opinion. “Almost all states have implemented return-to-play laws, and the NFL has made all kinds of rule changes,” Baugh said. “There’s a huge part that has happened in large effect due to Chris and his experiences.”

Cantu believes that the National Football League is, contrary to popular perception, a leader in concussion research. The league has responded to rising public outcry—largely driven by the heavily publicized suicide of former New England Patriots linebacker Junior Seau—with stricter regulations concerning head trauma across the board.

The NFL forbids contact during the offseason as part of its new collective bargaining agreement with the player’s union, a practice that hasn’t been adopted at either the high school or collegiate levels. Players also receive mandated sideline concussions tests after sustaining blows to the head.

The new policies have had immediate results. According to ESPN’s “Outside the Lines,” since the beginning of the NFL’s two-year process of revising league policies in 2009, teams have been more vigilant about keeping track of and addressing head trauma. Reported concussions are up nearly 67 percent since 2009. “Since 2010, [the NFL’s] leaders do get it,” Cantu said. “[NFL commissioner Roger Goodell] has got everything in the right direction for trying to reduce the amount of head trauma his athletes are seeing.”

Internationally, the issue hasn’t received the same amount of attention as it has in the United States. Although football has been more publicly linked with concussions, both Nowinski and Cantu cited soccer as an example of another sport where concussions are a pervasive issue.

“When you throw in headers, we are going to find CTE in soccer players. [There’s] no question,” Nowinski said. Headers, like helmet-to-helmet hits in football, are the riskiest part of the sport. “Going for headers, which leads to you hitting someone or the ball itself, causes most of the brain trauma in soccer.”

The Kids Aren’t All Right

While concussion research has succeeded in creating a national dialogue concerning responses to head trauma among professional sports, there exists a larger group that remains at risk: amateur athletes.

Cantu has witnessed an emergence of head trauma among younger players, highlighted by the case of the Pop Warner football player who lost his memory. “They’re starting younger and younger, so they’re picking up brain trauma earlier and earlier at a time the brain is particularly susceptible,” Cantu said. “Over the course of their lifetime, they’ll pick up more trauma because they started earlier.”

Part of the issue revolves around advocacy among professional athletes. While many NFL football players—who are earning in the upwards of millions of dollars—can hire lawyers to represent their cause, amateur football participants have little support. “Kids in college don’t have advocates,” Nowinski added. “They don’t have lawyers. They don’t have people sticking up for them. High school athletes are in the same boat.”

Even in terms of rules and regulations, amateur athletes do not have as much protection as some of the pros. In contrast to the NFL, many colleges and high schools do not limit hits and even hold full-contact practices in the offseason.

Nowinski and Cantu hope a solution to child head trauma lies in a new project they call the Hit Count Initiative. Using technology that tracks the amount of hits each athlete sustains, they are trying to make football safer for amateurs by reducing that number of hits. The model is similar to pitch counts for baseball, where coaches can rest pitchers after a certain amount of pitches to protect their arms.

“The idea is to try and make the game safer for the children,” Nowinski said.

Rumors have circulated that football will not survive the concussion crisis. “Friday Night Lights” author Buzz Bissinger and New Yorker columnist Malcolm Gladwell argued in a May 2012 debate at New York University in favor of ending college football. Sixteen percent of their audience came into the debate looking to ban college football, 53 percent left with that opinion.

However, Cantu said the question is not whether or not to eliminate football, but rather how to reform the culture that has children in helmets and pads even before they reach puberty. “If you change the way you practice the sport, you can reduce sixty percent of the head trauma,” Cantu said.

While she was pleased with the NFL’s progress on the issue since it began addressing reforms in 2009, Baugh thinks the current approach to reforming its practices is misplaced. “A lot of the laws and rules are focused on when a concussion is diagnosed instead of doing things that can prevent the concussions and subconcussive kinds of hits that lead to late life difficulties,” Baugh said. She believes that embracing reactive methods focusing on assessing concussions after they happen requires faith in a haphazard science and frequently requires players to be able and willing to diagnose their own symptoms.

Instead, Baugh champions preventative methods that change the way football is practiced without threatening the game’s integrity. “Eliminating certain types of drills [from practice] are where all these leagues can improve their brain trauma management policies in order to ensure athletes’ safety,” Baugh said.

The NFL began to address Baugh’s concerns when it banned two-a-day contact practices during training camps in 2011 but dangerous drills like “bull in a ring,” in which teammates form a circle around one player and proceed to violently, one-after-another, try and bring him to the ground, persist.

The dichotomy is indicative of a larger truth about concussions: there is always more that can be done to prevent them. For the Sports Legacy Institute, a standard of success has already been set. Nowinski, a man who started h is initiative by calling athletes’ families to solicit brain donations in an era where CTE wasn’t even in the league’s lexicon, is now a public face for the cause. From the gridiron to the battlefield—the military uses the same science to diagnose concussions and pull soldiers out of combat—when it comes to safety, they have succeeded in making sure no rule is set in stone.

“No sport today looks at all like it did 20 years ago, and nobody wants any permanent brain damage because the rules were once written this way,” Nowinski said. “The whole idea of sports being sacred is misguided thinking. There’s nothing sacred out there except for the people pursuing it.”