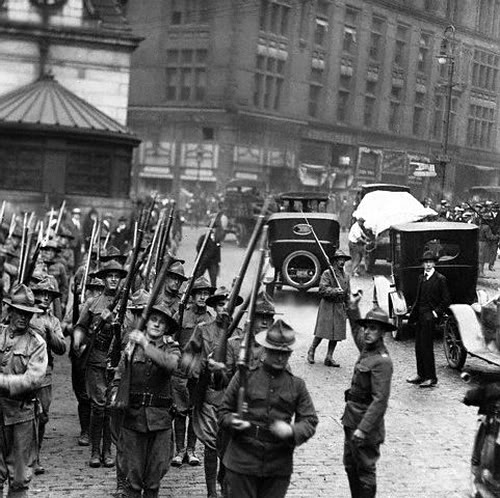 The fall semester had not yet started, but in response to Boston Police Department strike, University President A. Lawrence Lowell, Class of 1877, encouraged students to volunteer as replacement officers.
By Drew C. Pendergrass

On Sept. 9, 1919, Boston police officers voted 1,134 to two in favor of striking. Among their demands were the right to form a union, higher wages, and better working conditions. But with only 24 policemen left on the force, Boston was in trouble—and Harvard stepped in to help.

According to articles from The Crimson’s archives, more than 250 students volunteered as strikebreakers, and along with an additional 150 faculty members and alumni, the Harvard student body, for a few days at least, became the new face of the Boston Police Department.

The fall semester had not yet started, but in response to the crisis, University President A. Lawrence Lowell, Class of 1877, encouraged students to volunteer as replacement officers. He urged, in his words, “all students who can do so to prepare themselves for such service as the Governor of the Commonwealth may call upon them to render.” Several hundred students who were on campus for summer school, as well as athletes training for the coming season, heard this call to action.

Students were not the only members of the Harvard community to join the force. Rumford Professor of Physics Edwin H. Hall was the first to volunteer. Godfrey Lowell Cabot, Class of 1882, showed up cloaked in a naval cape with a set of pistols on his belt.

They were joined by an unusual cast of temps. According to one rumor, an Oklahoma rancher patrolled the streets in high-heeled boots and a sombrero. The Los Angeles Times profiled Helen Coran, the sole woman to volunteer; she directed traffic in long white gloves and a feather boa after no male replacements could be found to relieve an exhausted volunteer.

Most strikebreakers were upper class, hailing from Back Bay and Beacon Hill, as well as Harvard Square, displacing the poorer Boston Irish that dominated the pre-strike force. This demographic shift towards Protestant Yankees would persist after the strike, as no picketing workers were hired back onto the force.

However, the new officers, said to have lacked “radical sympathies,” were not as well-trained as the old policemen. One theory for the 1920 arrest and execution of Sacco and Vanzetti, the anarchists who were accused of two South Braintree murders under shadowy evidence, was that the Boston Police Department was functioning poorly one year after the strike.

This shift in the police force created resentment in Boston’s working class towards the scabs—especially Harvard students—and the political class that they represented. Lowell responded by saying that the students were “reporting simply as citizens of the Commonwealth in response to a call from the governor,” not as strikebreakers.

There was a strong national backlash to the strike. At the height of the Red Scare, many Americans were fearful of the labor movement, particularly of public unions. Commissioner Edward Upton Curtis refused to recognize the overwhelming police vote to join the American Federation of Labor, arguing that this was a step towards Bolshevism. Then Massachusetts Governor Calvin Coolidge took a hardline stance towards the strike, which vaulted him into national prominence and a path towards the presidency.

Many Harvard students echoed Coolidge’s stance towards the strike. One anonymous Crimson op-ed supported Curtis, warning that “the United States will soon become a nation controlled by labor unions instead of by an independent electorate.” Another echoed that the strike was “a direct challenge by the labor agitators to the supremacy of the state.”

One young tutor took the opposite position, to the chagrin of many. Harold J. Laski, a socialist theorist, argued in favor of the strike, telling the wives of striking officers that “labor will never yield.” This led to a debate over the limits of academic freedom throughout the University, including within the Board of Overseers. President Lowell eventually stepped in with a threat: “If the Overseers ask for Laski’s resignation they will get mine.”

Even after Lowell’s defense, many were angered by Laski’s socialist sensibility. D. H. Worrall, Class of 1920, wrote that the student body should “shun [Laski] as a ‘Boudoir Bolshevist,’ a breed against which we have been warned.” The Harvard Lampoon–a semi-secret Sorrento Square social organization that used to occasionally publish a so-called humor magazine–published an entire issue, the “Laski Lampoon,” dedicated to criticizing him as “a Bolshevik who drags the name of Harvard through the slime.”

All of this eventually drove Laski to move to the London School of Economics the next year. However, just before he left, Laski responded to the Lampoon, characterizing its humor as “a little obvious, and the number of themes upon which it lays unholy hands could have been varied with advantage.”