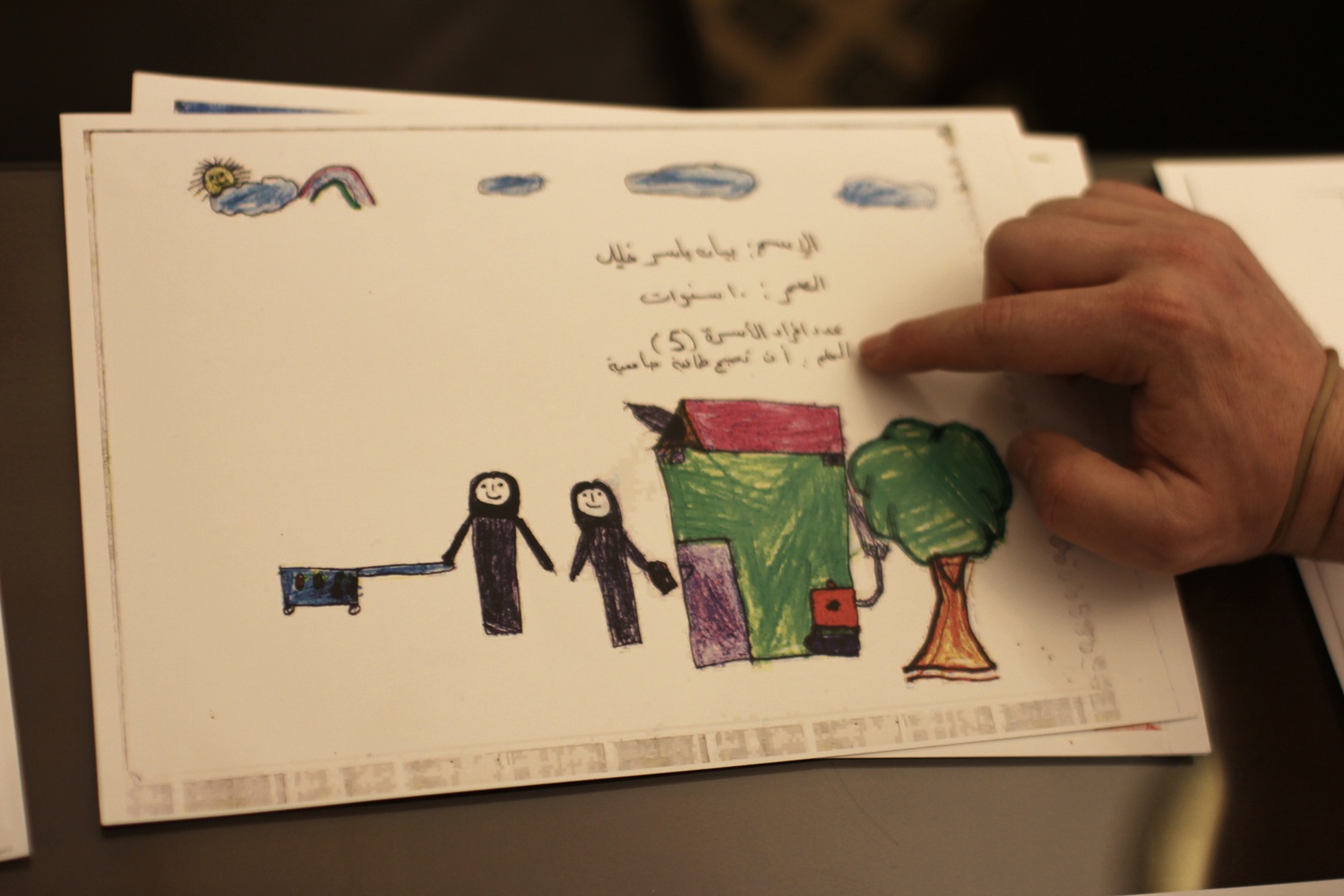 This weekend, the Business School featured an exhibit of drawings by Syrian children, in order to spread awareness for the UK based charity, From Syria With Love. By Marinda R. Horan
Advertisement
Advertisement

From Syria with Love

Baraa Kouja is trying to get Westerners to understand the reality of the Syrian refugee crisis. This week, his art exhibition “From Syria with Love” stopped by Harvard’s campus to help bridge the gap.
By Cleo M. Harrington

News playing out on a screen often carries a distant weight. We hear about the human rights abuses of the Syrian refugee crisis. We see the photos of overfilled boats, of thousands of people crowding the shores of Greek beaches.

Then our phones buzz at us, telling us we have to go to that meeting or write that paper. And we run off, seamlessly enveloped back into our busy lives.

Baraa Kouja is trying to get Westerners to understand the reality of the Syrian refugee crisis. This week, his art exhibition “From Syria with Love” stopped by Harvard’s campus to help bridge the gap.

The exhibition is tiny. It occupies one wall inside Harvard Law School’s Austin Hall. Nevertheless, it is dizzying and colorful; it has its own way of drawing Syria closer to viewers. The drawings that line the wall have all been created by refugee children as a way to “express their feelings and emotions through art,” Kouja says. “Some of them are promising and hopeful, some of them are tragic… they all are powerful.”

Kouja, originally from Aleppo, founded a nonprofit organization—also called From Syria With Love—a year ago, while living in the UK. According to Kouja, the organization doesn’t take money for management and administration fees, and forwards all donations to refugee camps in Europe. Kouja has traveled the world leading talks and presenting the exhibition. 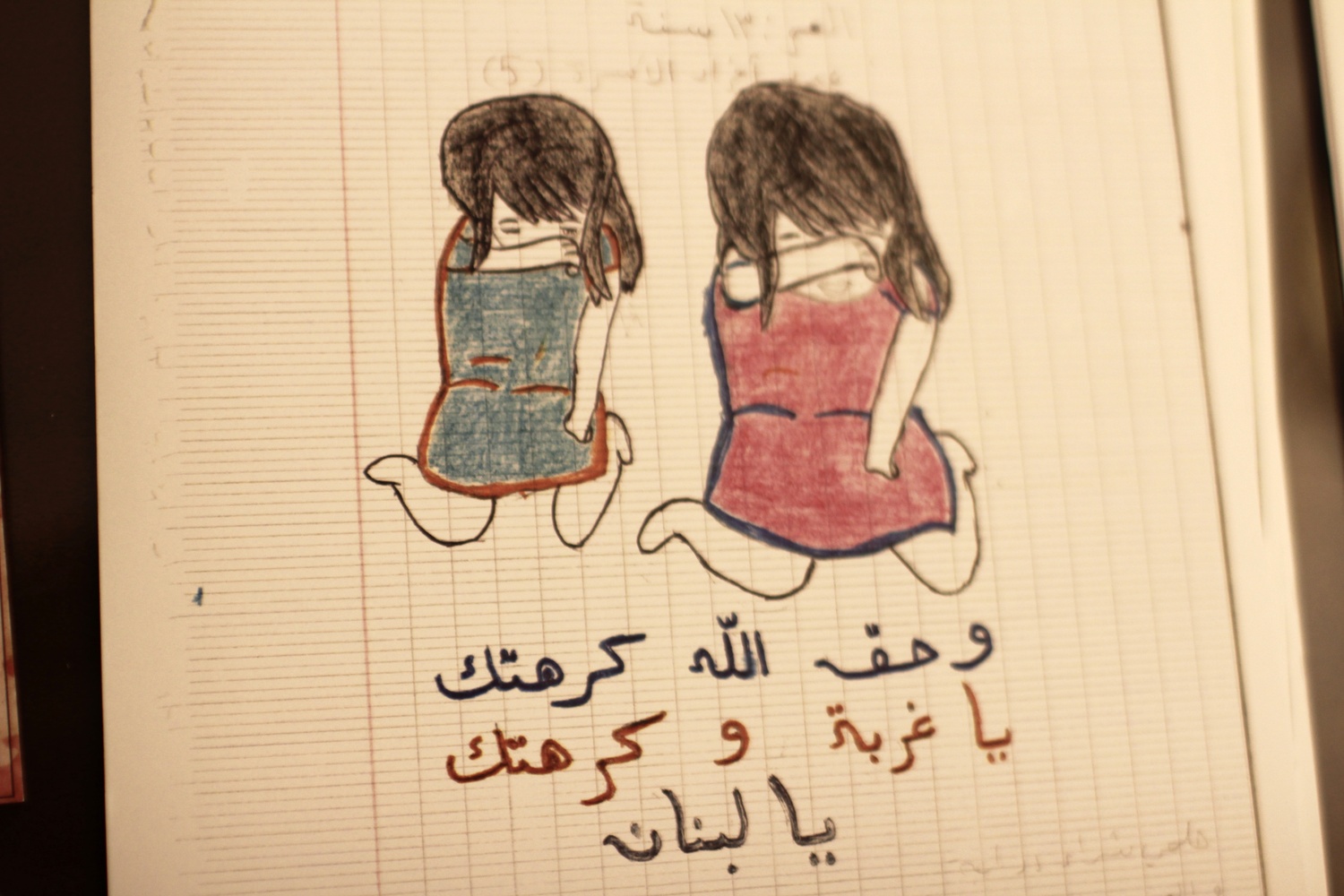 Volunteer Molly Masters, who published the book “From Syria With Love,” was also at the event. By Marinda R. Horan

The exhibition’s artwork offers viewers a glimpse into refugee children’s lives. Each piece is accompanied by an ID card, which features the artist’s name, age, and picture. One boy, Zahar Al-Omar, has drawn a picture of two opposing worlds. In one, missiles rain down on dead children. The sky is dark, the ground red. The other half of the drawing is light, in bright blues and purples. Happy-looking people hold bundles of balloons.

Another image stands out. Two girls, one in pink and the other in blue, sit crouched on the ground, shielding their eyes with their arms. Donha Khalil, the artist, is 13 years old. 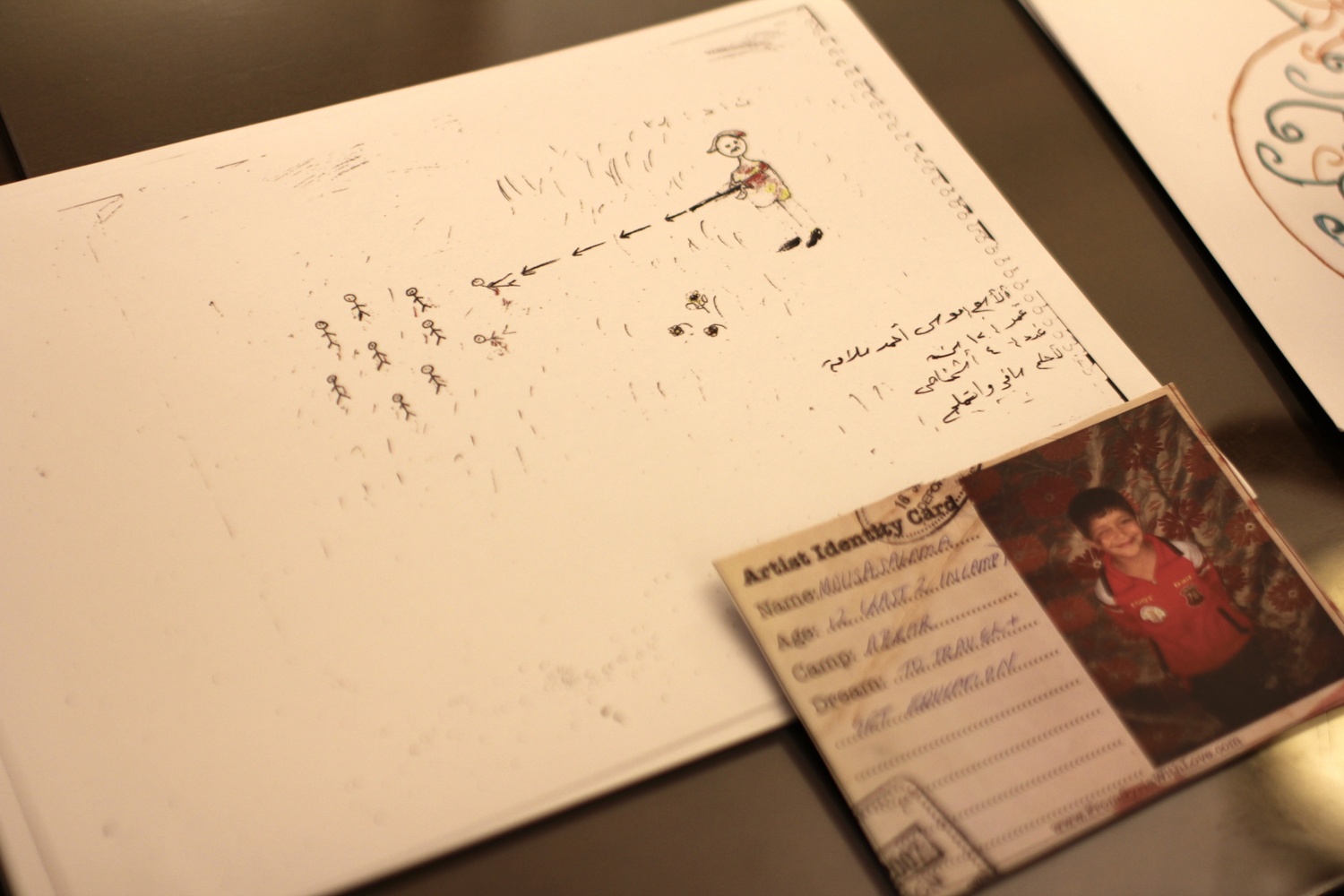 Organizers of the event hoped that displaying artwork by Syrian children might cause people to stop and think about the importance of the charity. By Marinda R. Horan

Over the past year, Kouja’s efforts have yielded significant results. “This art exhibition has toured more than 25 destinations in the UK and been to France, San Francisco, and now Harvard University,” he says. After taking off in the UK, From Syria With Love has raised more than $30,000 in less than a year, according to Kouja.

Looking at the survivors’ drawings and their simultaneously hopeful and desperate words, viewers may be reminded of their own childhood drawings. Simple shapes, scribbled letters, and crayon outlines of wonder and terror mark the pieces of paper. They make the refugee crisis feel closer to home than you’d expect.