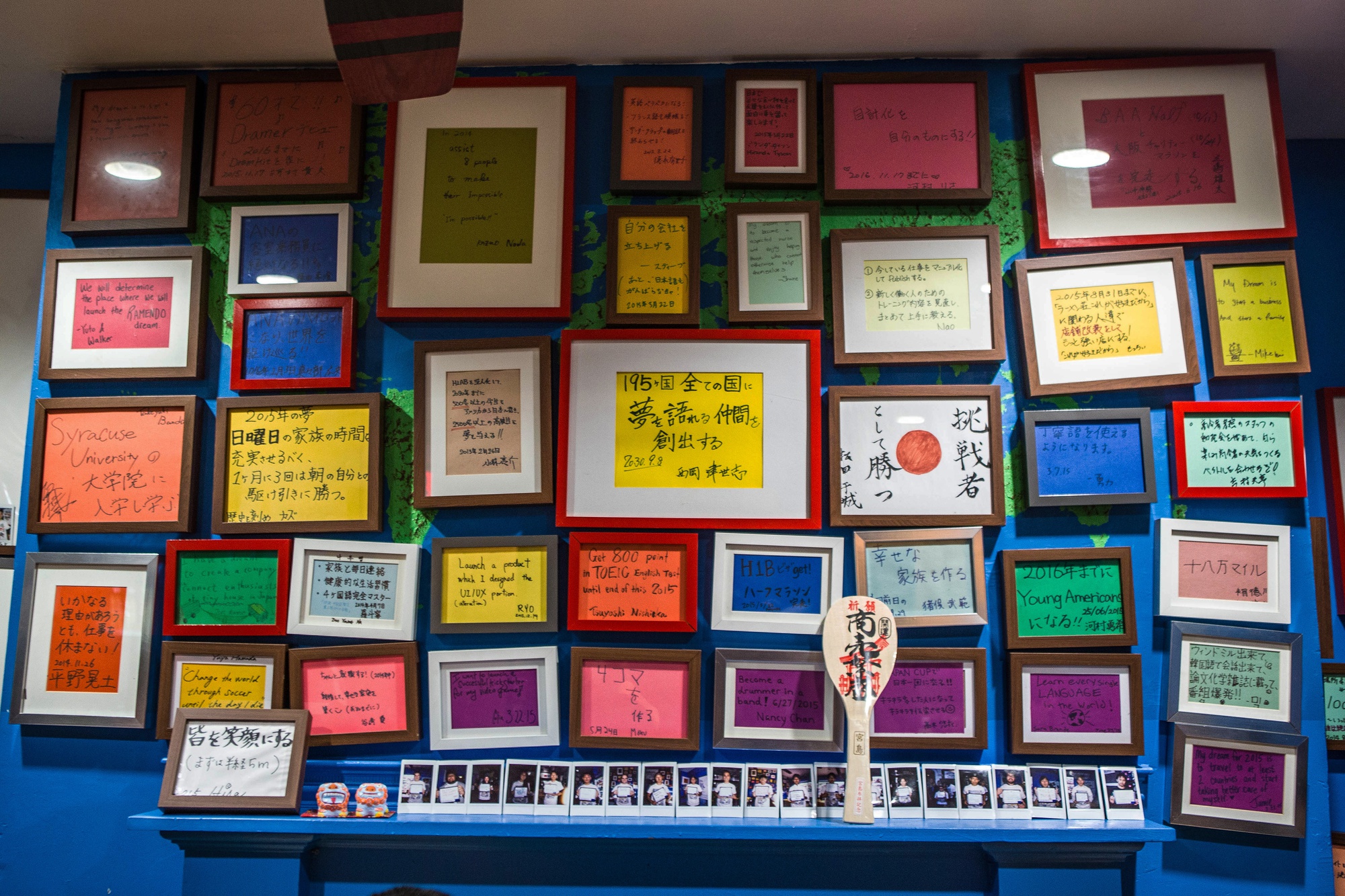 Customers can choose to pay to have their dreams written on the wall of the restaurant, with the added benefit of free ramen for a month.
Advertisement
Advertisement

​“Would you like to share your dreams today?” A waiter greeted me as I stepped into the tiny restaurant. A couple of friends and I had Ubered over to Porter Square’s hole-in-the-wall ramen restaraunt, Yume Wo Katare.
By Emily H. Choi

“Would you like to share your dreams today?” A waiter greeted me as I stepped into the tiny restaurant. A couple of friends and I had Ubered over to Porter Square’s hole-in-the-wall ramen restaraunt, Yume Wo Katare. Translated literally from Japanese, the name means “Talk about your dreams.” 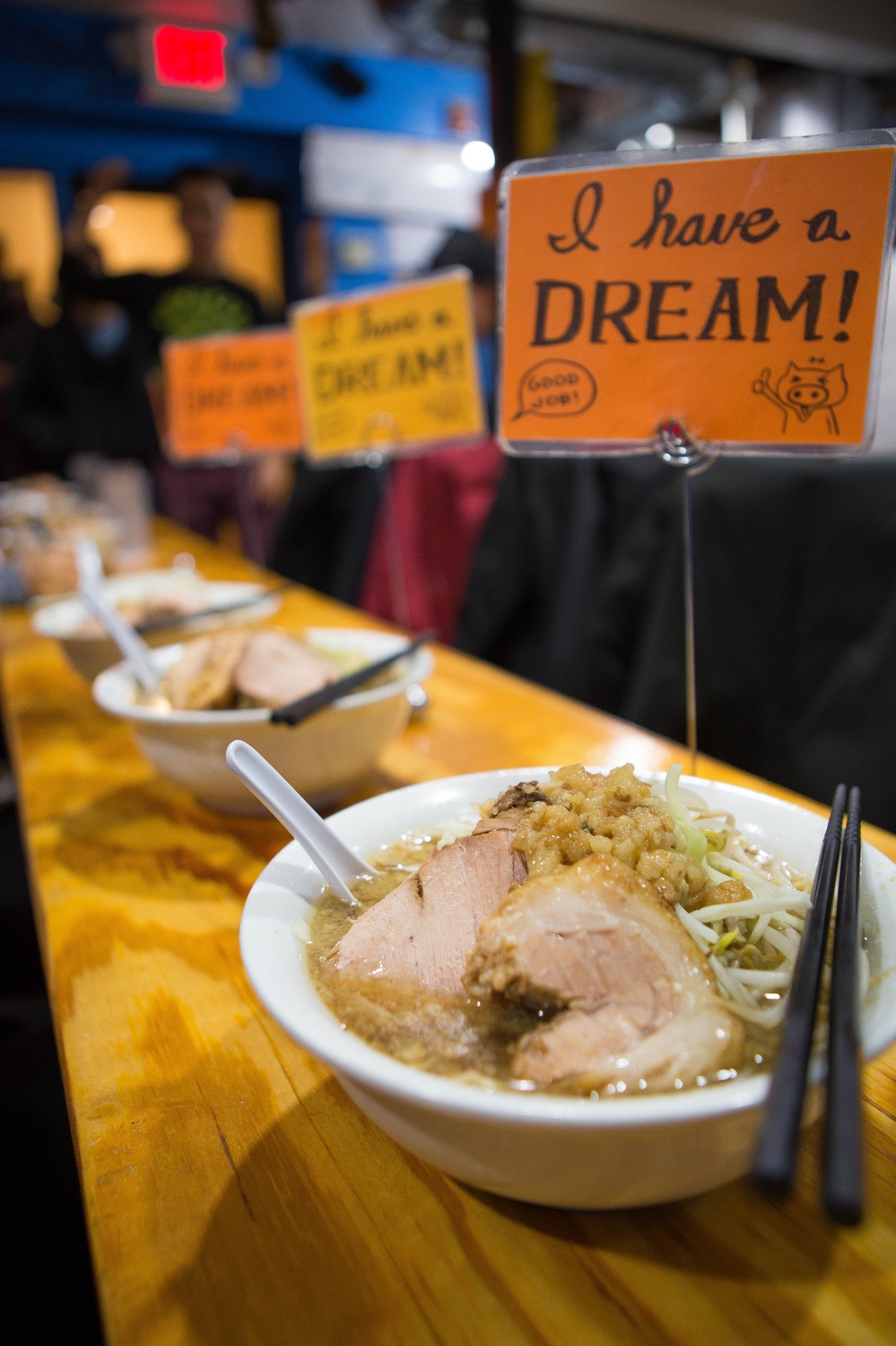 At Yume Wo Katare, a Japanese ramen restaurant in Porter Square, after customers finish their bowl of ramen, they stand up to share their short term and long term dreams. By Cynthia Guo

Before making it inside, we waited in line for 40 minutes in the freezing cold. As we huddled together to keep warm, a server came by to say hello and asked if we would like to share a long- or short-term dream. He quickly explained that Yumo Wo Katare is trying to make it into the Guinness Book of World Records by breaking the record for “Most Dreams Shared In a Year.” The record currently stands at 10,000 dreams.

I nodded eagerly, received a bright orange “I Have a Dream” card, and was asked what I wanted to eat. The choice was simple: ramen or more ramen. There is something to be said about a restaurant that serves only one dish and still consistently attracts a long line of customers. I went with ramen, which comes with two (rather than five) pieces of pork.

After ordering, we were seated at the second row of three wooden counters. The walls around us were decorated with framed dreams of previous patrons. As a soccer aficionado, one caught my eye: A previous visitor dreamed of “chang[ing] the world through soccer.”

We received our “bowls of dreams” and didn’t wait a second to start slurping away. I’ve found that the the key to an awesome bowl of ramen is the broth —­too salty, and the bowl is immediately messed up. But Yume has got it down to an art; they served broth that is well-seasoned and tasty and filled with slices of delectably tender pork. Coiled within was a generous serving of noodles, which had ben cooked to perfection. Heed this warning, though: Don’t bring a date to Yume. Ramen is an inherently messy meal, and you’ll leave feeling very satisfied, but very splattered. 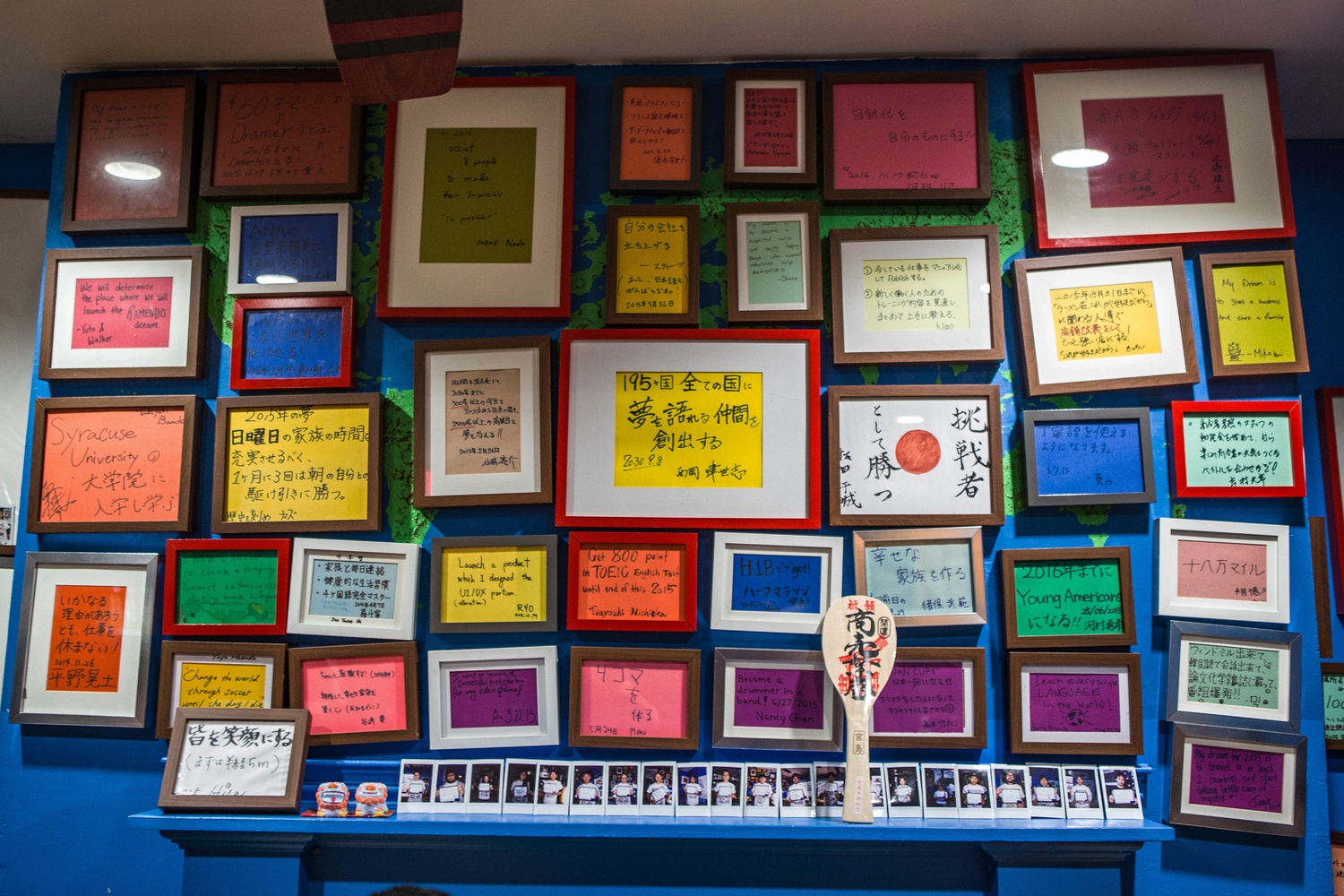 Customers can choose to pay to have their dreams written on the wall of the restaurant, with the added benefit of free ramen for a month. By Cynthia Guo

During our meal, we were periodically interrupted by fellow patrons who stood up, told us their names, and proudly proclaimed that this was their tenth, 55th, or, in our case, first time eating at Yume. They then declared their dreams before returning to their noodles.

The ultimate goal at Yume Wo Katare is to have your bowl dubbed “perfect” by servers who move from row to row inspecting finished bowls. You may only receive the coveted “perfect” evaluation if you finish absolutely everything in your bowl—broth, bean sprouts, noodles, and pork. You can also receive a “good job,” “almost,” or an optimisitc “next time.” The accolades encourage diners to reduce food waste, and introduce a fun, quasi-competitive element to the meal.

Miranda F. Tyson ’18, a former employee, says the dream-sharing doesn’t stop with customers. “Before every shift, we all had to share our goal for that day, our goal for that month, and our goal for the following six months,” she says. “Other employees were encouraged to ask questions so that the goal-sharer was forced to think more about how they were to accomplish their goals within that time-frame.”

This created an environment “in which I felt like I was continuously being encouraged,” Tyson says. The supportive environment extends to customers as well. During our visit, dream-sharers were met with enthusiastic hoots and cheers.